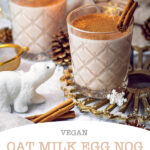 Deliciously creamy vegan oat milk eggnog – it’s the stuff that (vegan) Christmas dreams are made of! 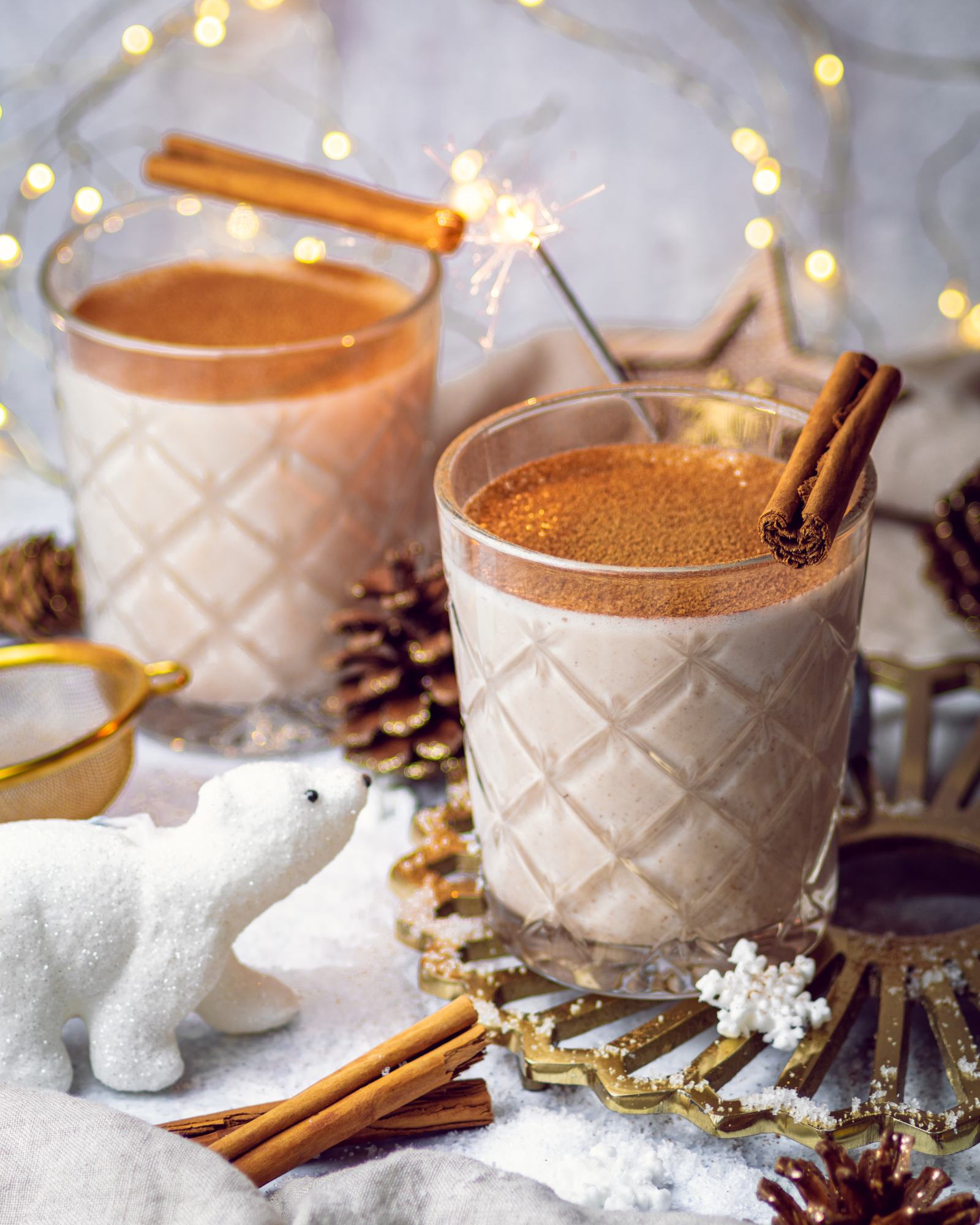 Okay, I think it’s time to admit something… I’ve never had eggnog in my entire life, but if it’s anything like this oat milk eggnog (vegan) I definitely would have loved it before going vegan.

What’s not vegan about traditional eggnog

If you’ve ever been wondering what the ingredients in eggnog are and why the traditional recipe is not vegan, then let me tell you – of course, half of the reason is already in the name. Yes, eggnog does ACTUALLY contain egg. Don’t believe it? Well, you’re invited to do your own Google research and convince yourself that egg yolks are a vital part of non-vegan eggnog. 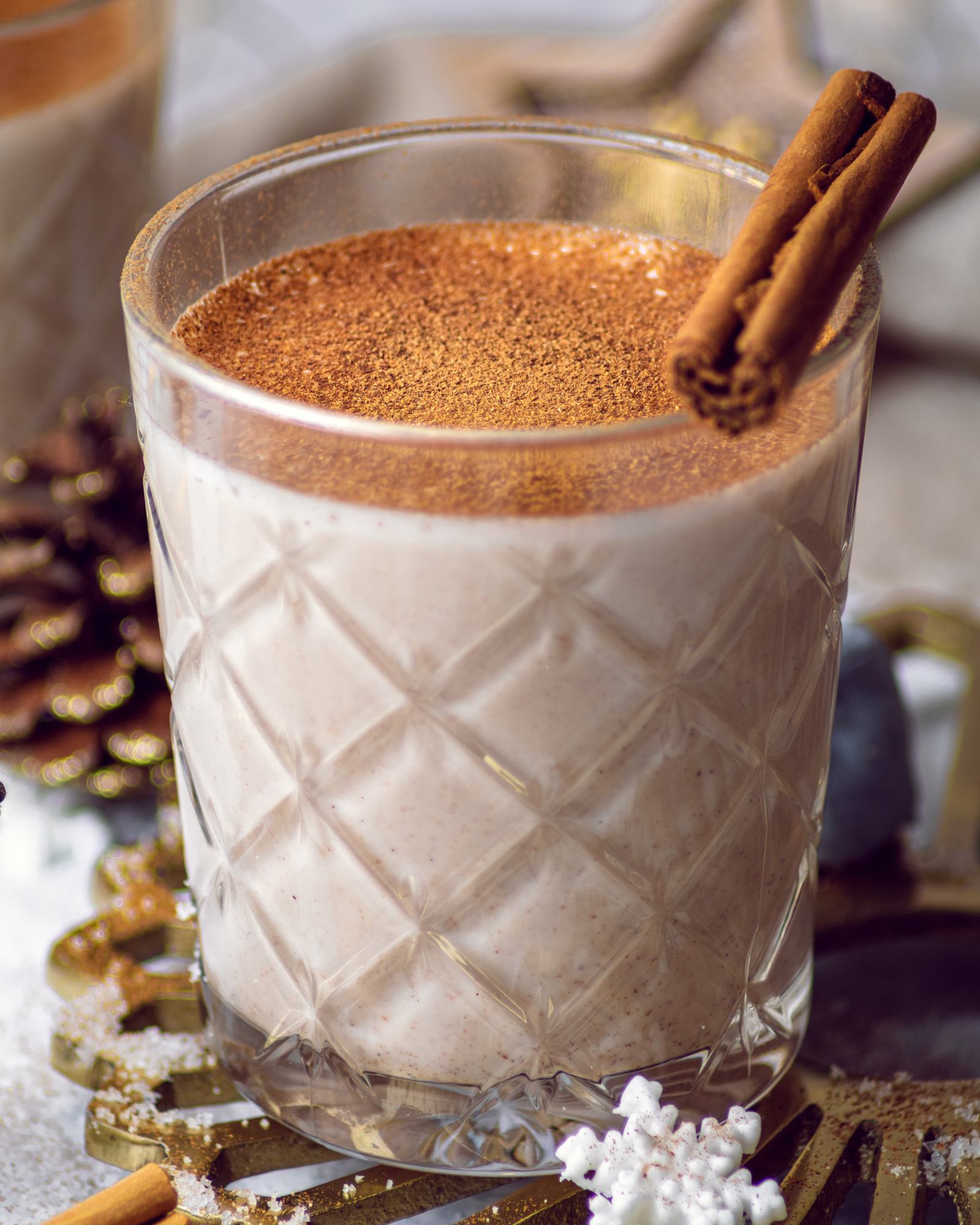 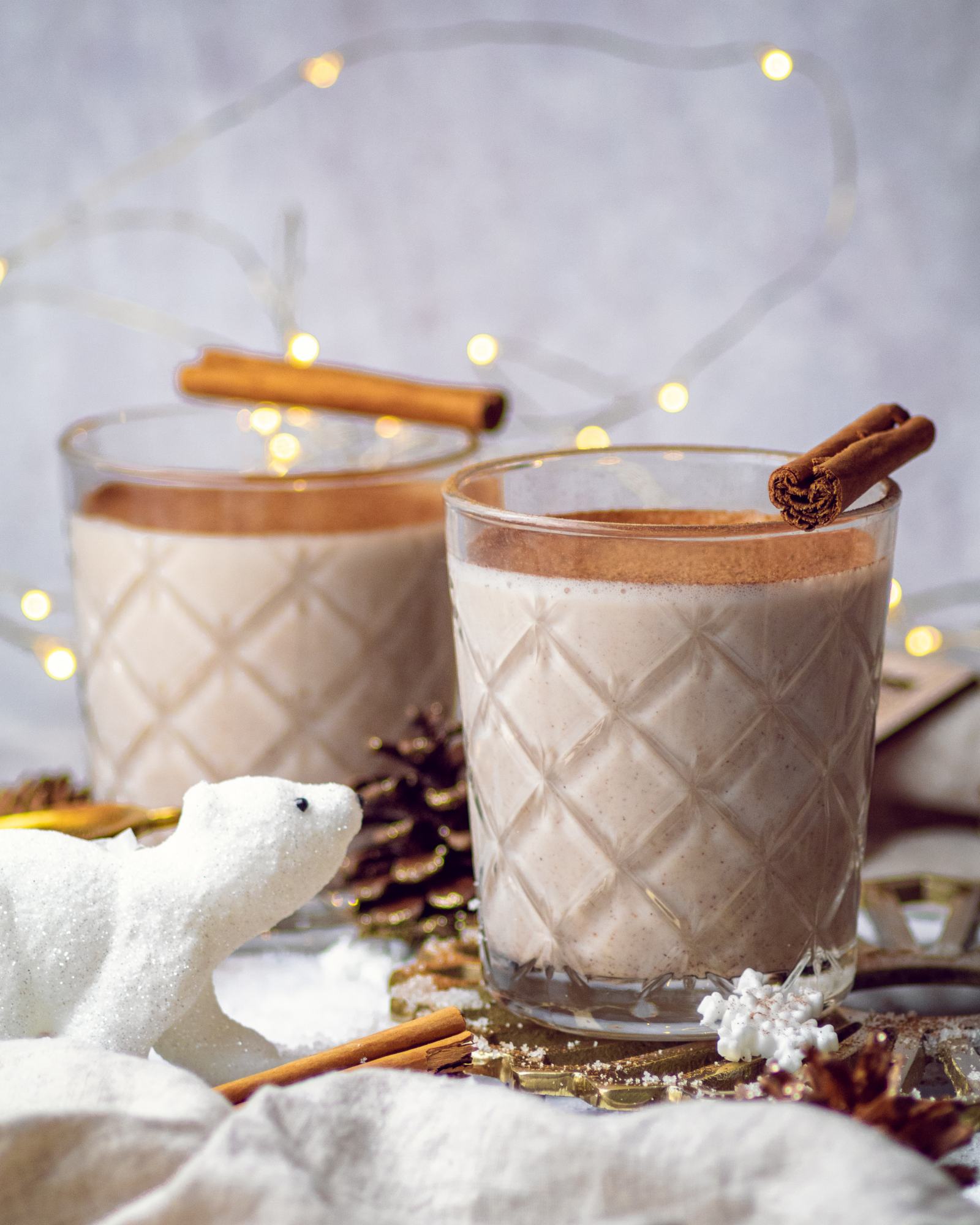 How to make this creamy vegan oat milk eggnog

The creamy base for this eggnog (vegan)

As I have used oat milk as a base for my eggnog you could say that the choice of milk already gives it a particular creaminess – however, if you’ve ever had actual eggnog, you know that oat milk alone isn’t going to create the thick creamy texture you’re used to. And that’s where another fabulous ingredient comes in: cashews!

You might know our little friend ‘cashew’ from its hits such as ‘soak for a minimum of 4-6 hours’ or ‘soak overnight’ – but let me tell you there’s a very simple shortcut: Simply cover your cashews in boiling water and let them soak for 20 minutes. BOOM. Soft and ready to move to the next step. You’re welcome.

The cashews will create a thick texture and take the creaminess of the drink to the next level – it’s kinda like adding homemade cashew milk, but better!

Now that your cashews are nice and soft, add all your ingredients (except the non-alcoholic rum) to your highspeed blender and mix on high for about 5 minutes.

Whether or not you use a high-speed blender, it’s vital to strain the eggnog through a fine mesh or (ideally) a nut-milk bag to avoid any remaining nut chunks making their way into your otherwise smooth experience.

Now you’ve got the base, if you’re using the Rumish now is the time to stir it in, but don’t worry if you leave it out!

Besides the creamy texture, it’s the spices used in eggnog that create its distinct flavour and you will be surprised that there are only 2 spice heroes used in traditional eggnog:

The additional (and optional) spices come from:

The latter I like to use in moderation in this recipe as they can very easily be over-powering the rest of the ingredients. However, with the cinnamon, you are welcome to go all out and adjust to your liking – hence why you will see ‘1-2 tsp’ in the recipe ingredients below. I do love an extra serving of cinnamon – and even serve my eggnog with extra cinnamon sprinkled on the top.

Now it’s suitably spiced to your taste, serve your eggnog either hot or cold with a sprinkle of cinnamon over the top or keep refrigerated for up to a week. 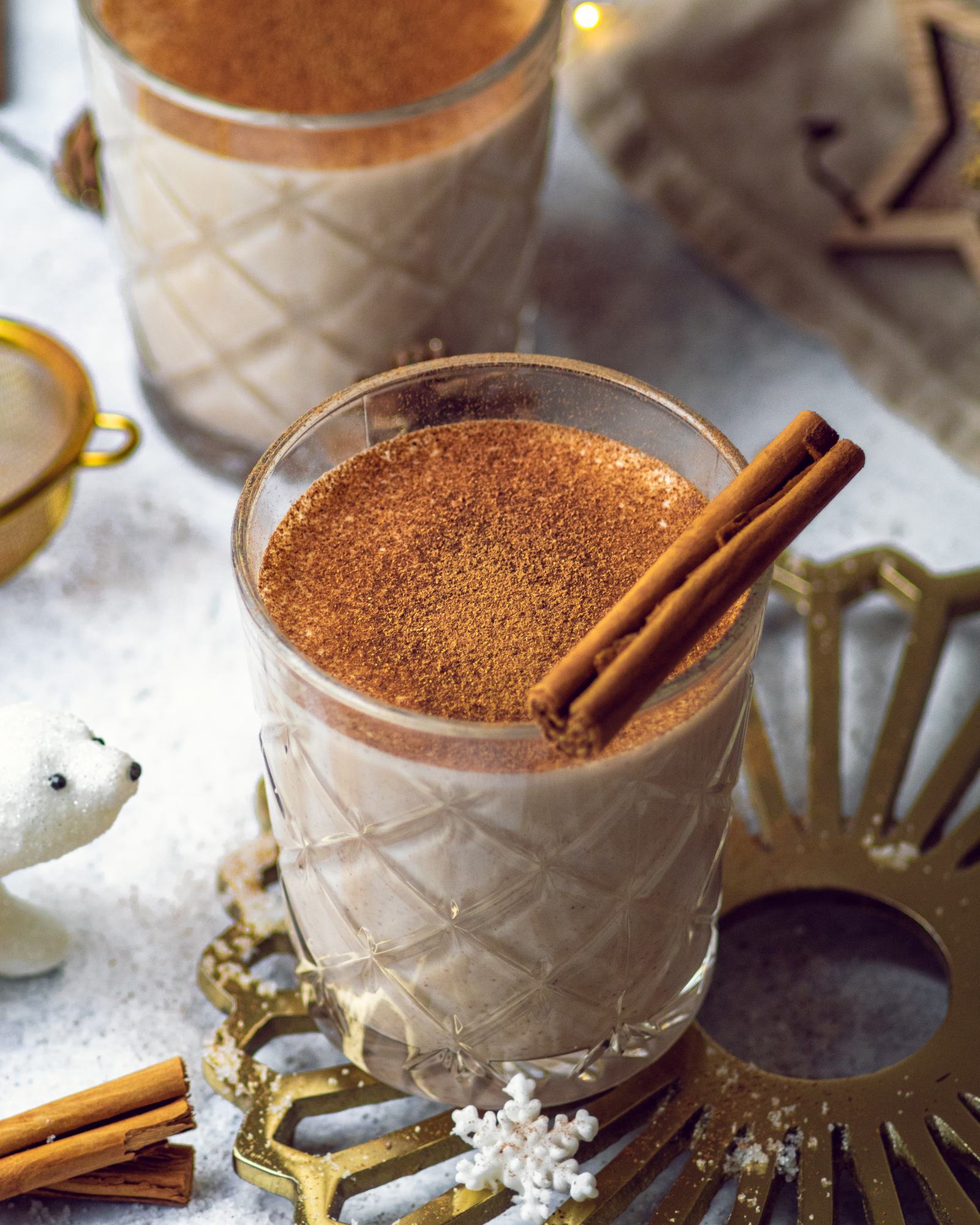 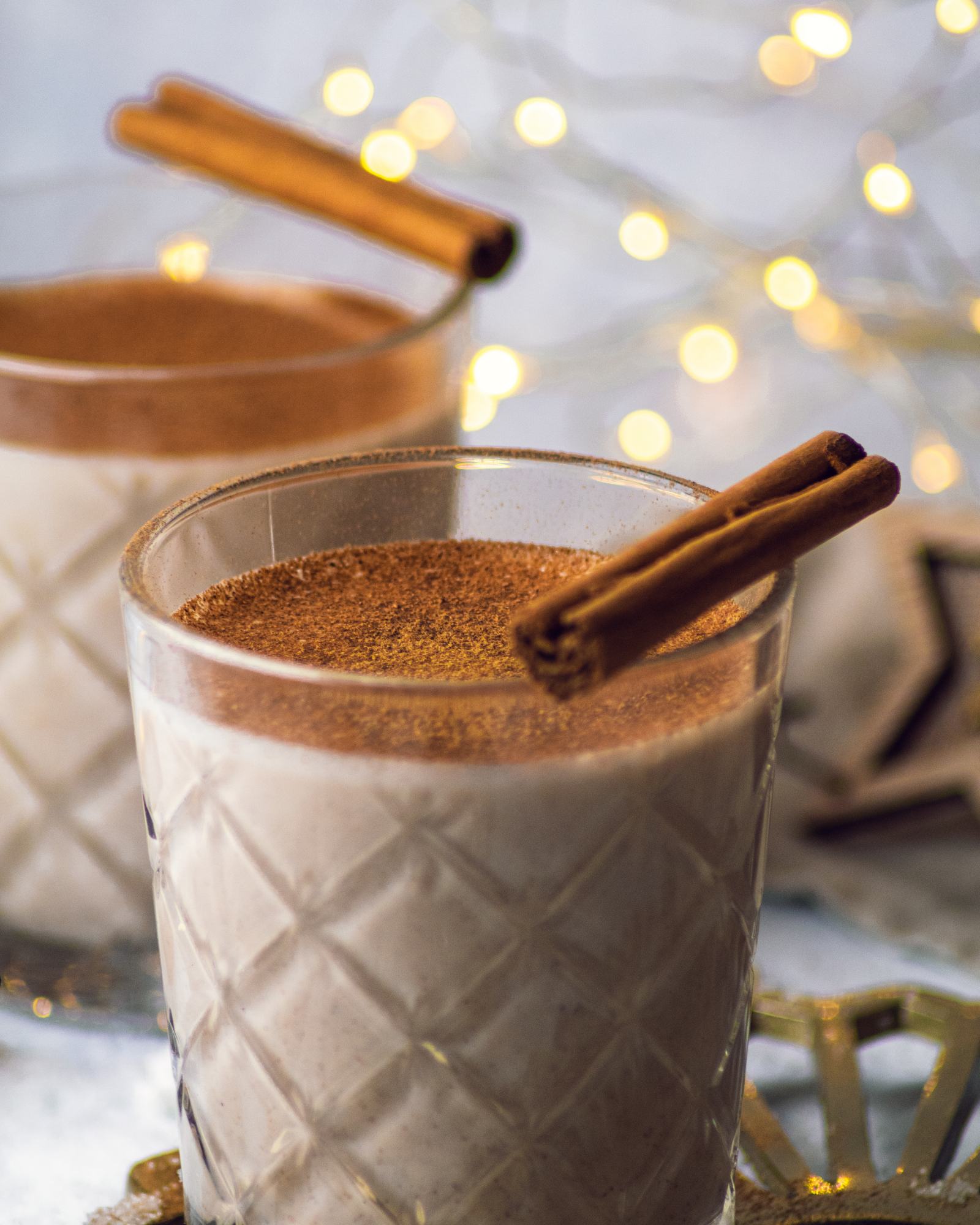 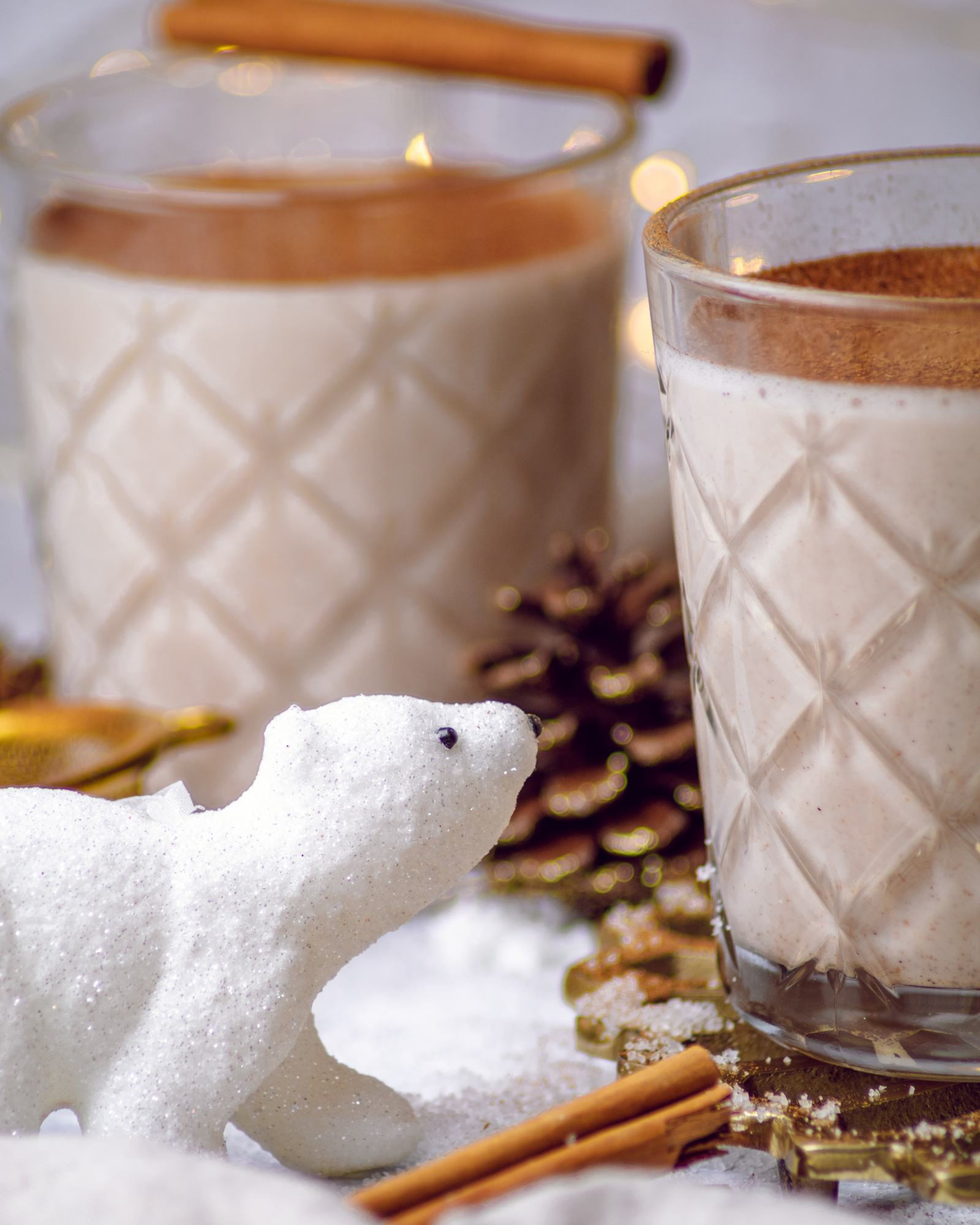 Deliciously creamy vegan oat milk egg nog – absolutely dreamy and the ultimate drink to get you into a Christmas mood.

If you would like your oat milk eggnog (vegan) to have an extra kick, you can of course feel free to simply replace the Rumish with actual rum (to your own liking!).

Looking for more festive recipes? Head to the festive section of my blog or check out some of my favourites below: