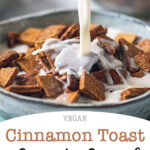 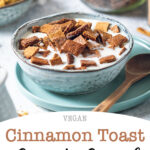 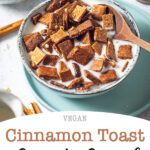 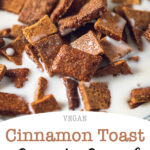 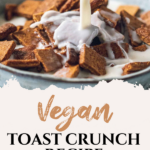 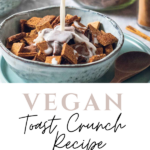 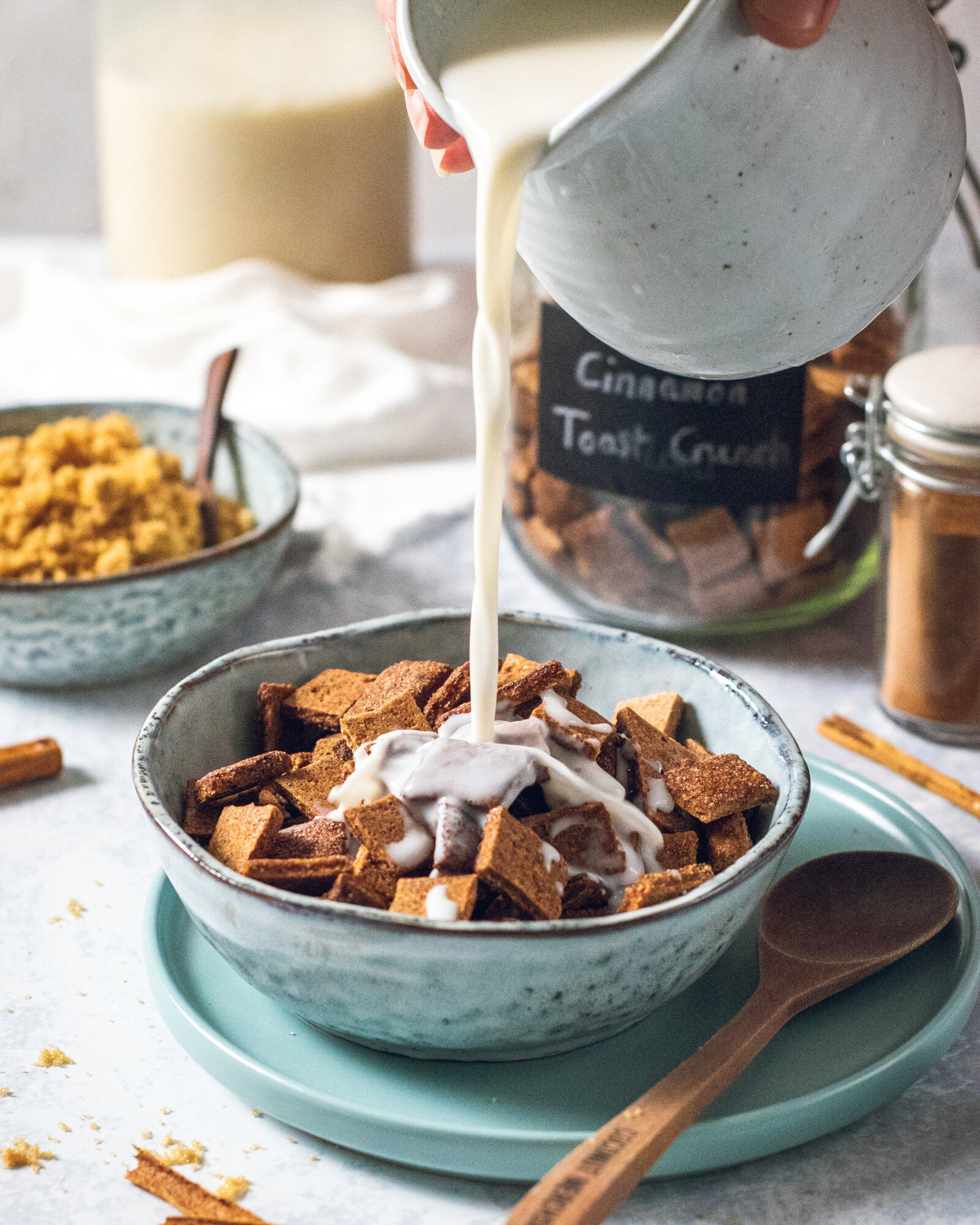 This Vegan Cinnamon Toast Crunch Recipe will take you straight back to childhood memories… at least if you’re me! This cereal classic has been one of my firm favourites as a child and I’m certain I often ate a much bigger amount than was reasonable as a kid… but psst, don’t tell mum! – or as it’s also called in the UK: ‘Vegan Curiously Cinnamon’!

I can’t even begin to tell you how much I’ve always wanted to create my own cereal!

Whilst I grew up with the likes of Kellogg’s & Co I’m aware that most commercial cereals contain an unhealthy amount of refined sugar – even when I was younger. I still remember vividly when my mother tried to cut down on the amount of cereal she bought – very much to the displeasure of my younger brother and me, as we still wanted our favourite cereals.

Oh and I used to have cereal not only for breakfast—sometimes it was also my afternoon snack or dinner—and other times even my lazy lunch when I was hungry before mum was home (when I was too young to safely use the kitchen myself, that was 😉)

After a period of my brother and me rebelling against my mum’s cereal-cut-down, we finally had to accept it, but to this day I am still a sucker for cereal and do occasionally buy vegan ones. Unfortunately, most of them are also full of sugar, so I thought hey: let me create my own! I figured it would be better if I made it myself so that I have total control over what goes in it.

Where to start? It was clear to me that I was gonna re-create one of my favourite cereals from my childhood: either Vegan Cinnamon Toast Crunch or Fruit Loops! I have to admit though that I thought Fruit Loops was a big very much next level, so I’ll leave that attempt for the future 😉

Did you know: The vegan cinnamon toast crunch is called ‘Cini Mini’s‘ in Germany (there is another brand called Curiously Cinnamon). Isn’t it crazy how different product names can be in other countries? 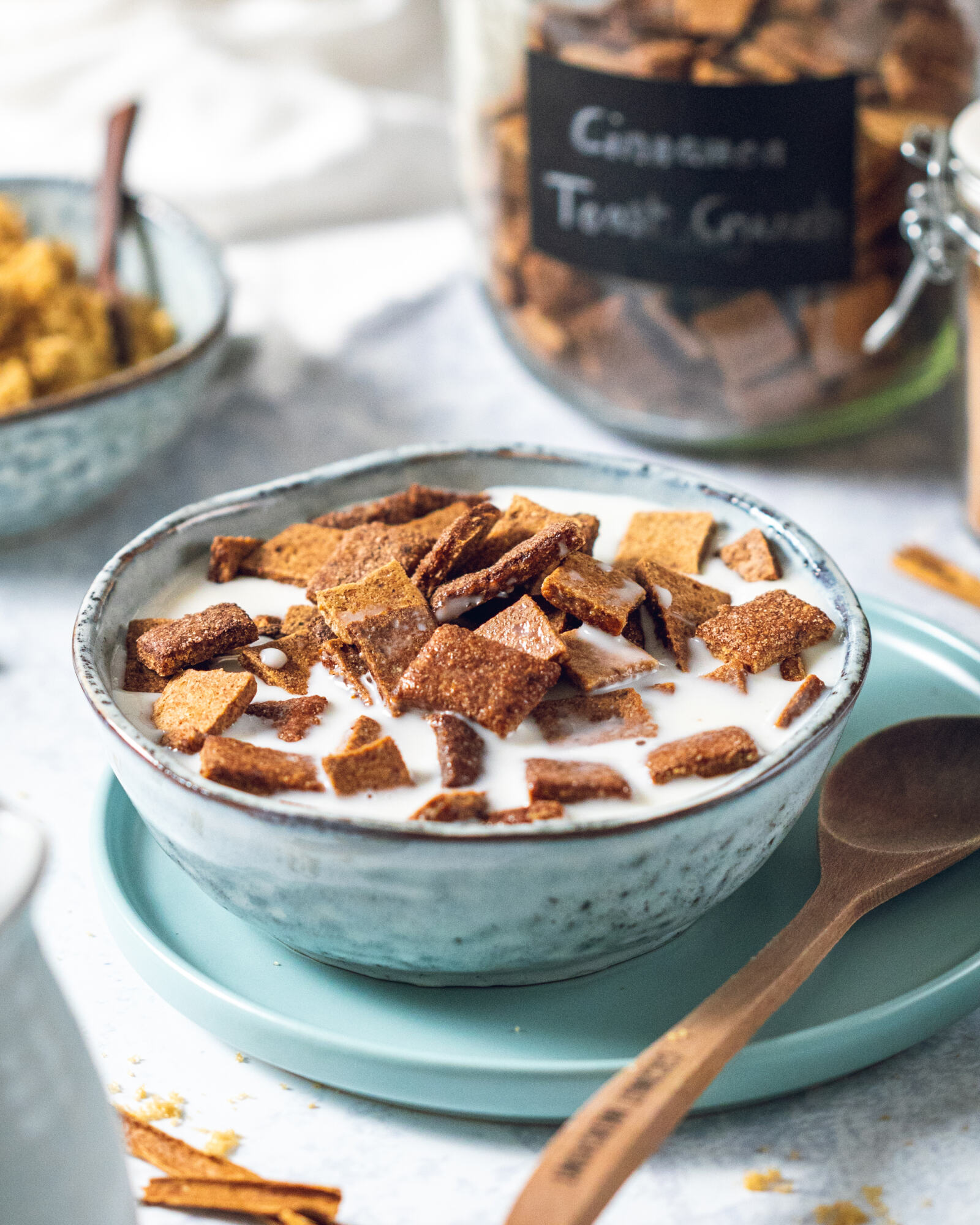 When checking the back of the packaging for loads of cereals available in the UK, it only takes a quick look to find that most of the cereals do not use milk or dairy in their ingredients and at a first glance, they might look vegan. There is however a hidden non-vegan ingredient in loads of them: vitamin D. Most cereals are fortified with some extra vitamin D, which in itself is not obviously non-vegan, however, for the majority of cereals that vitamin D is sourced from sheep’s wool and therefore not vegan-friendly. This includes the American Cinnamon Toast Crunch Cereal and the UK version ‘Curiously Cinnamon’ as well as the European version ‘Cini Minis’. It’s kinda crazy what people put into our food, isn’t it?

On the other side though: it’s really not that complicated to make cinnamon toast crunch vegan! 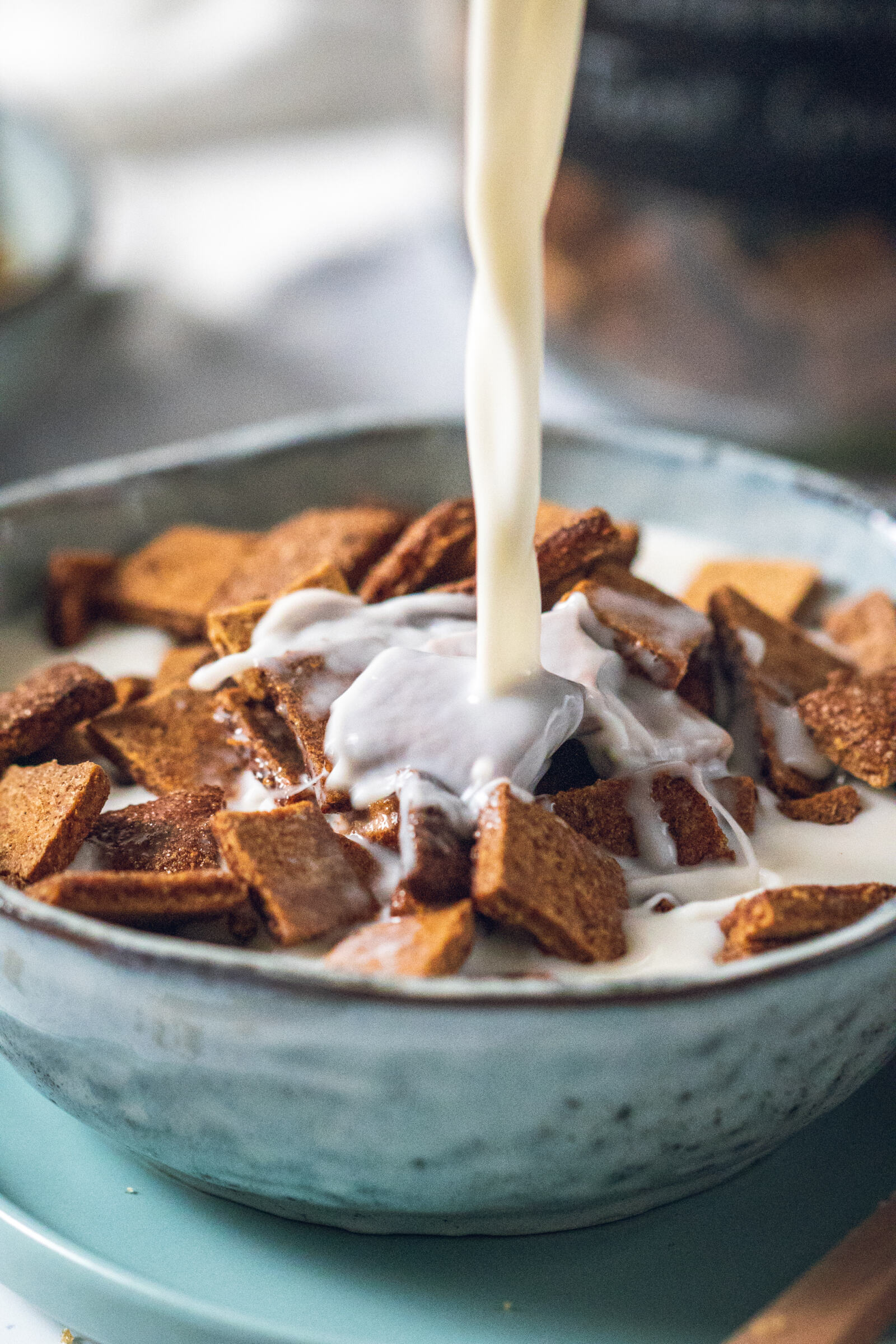 Also: extra sugar and cinnamon for the delicious cinnamon-sugar coating! 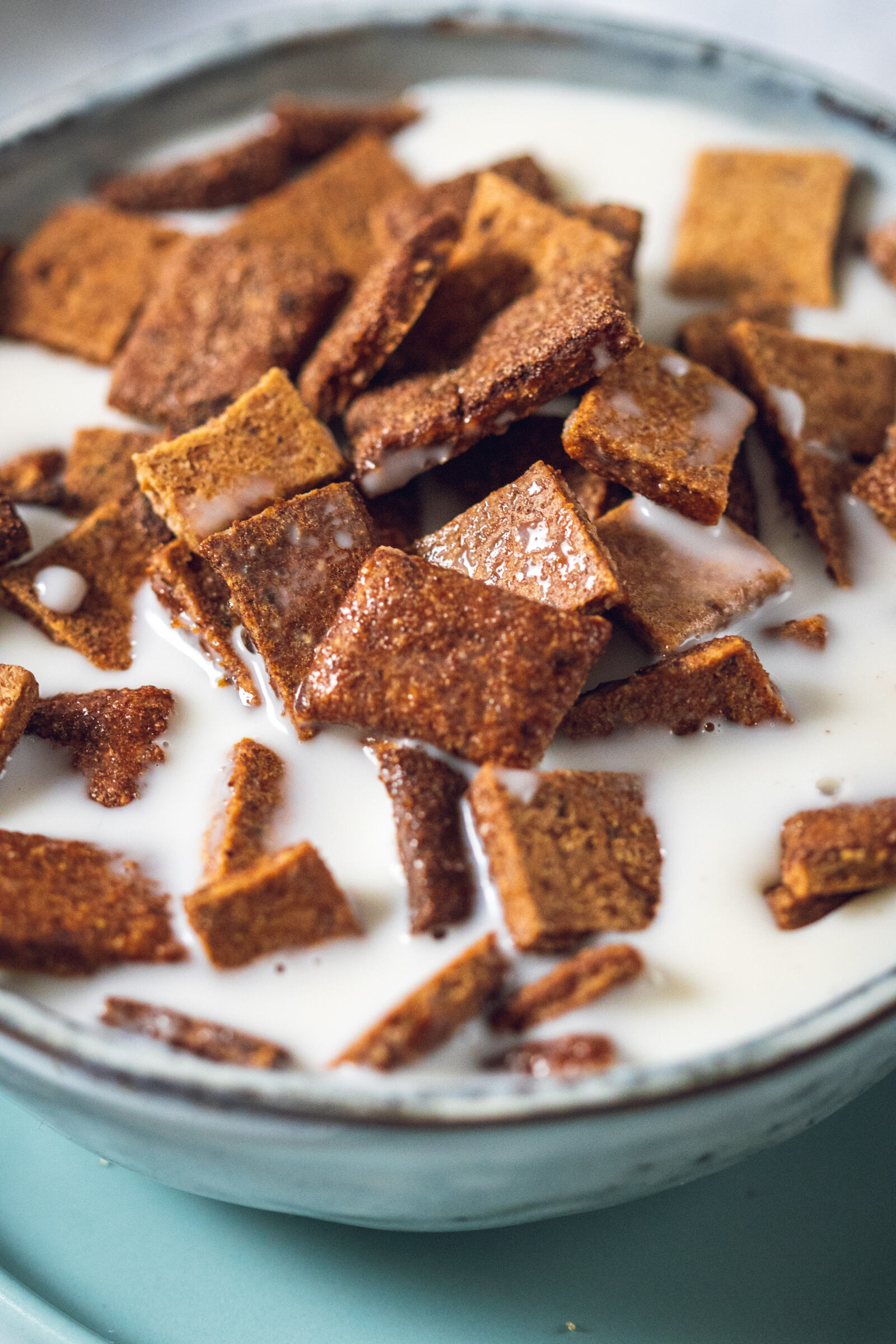 How to make vegan cereal from scratch

To start with, get two good-sized bowls from your cupboard. In the first bowl, mix all your dry ingredients and then mix all your wet ingredients in the second. Why should you mix them separately? Because this helps to evenly spread all ingredients through the dough that will become your cereal.

Now that you’ve mixed them separately, it’s time to mix them! Once you’ve mixed the dry and wet ingredients, you should be left with a ball of dough. Wrap this up in plastic, and put it in the fridge for 1 hour to get firm.

Once the hour is up, preheat your oven to 170ºC, take the dough out of the fridge and cut it in half. One half should be put in a placed in between a lightly flour-dusted baking sheet and the plastic wrap, then roll out as thinly as humanly possible!

Extra Tip: The plastic wrap will prevent the dough from sticking to your rolling pin.

Now, take a pizza cutter and use it to cut horizontal and vertical lines across the flattened dough. You should see now that this is starting to look a bit like cereal, so try to keep your lines equally set apart to ensure each square is roughly the same size.

Now coat your cereal by sprinkling a mix of Splenda Granulated and Cinnamon and repeat the process with your second half of dough.

Once you’re left with a load of tasty looking squares, put both batches in the oven and bake for 30 minutes.

Extra Tip: Be sure to check and make sure that your dough crisps up evenly. If your oven is hotter in one corner (like my old one!) then you’ll need to rotate your baking tray to make sure it all cooks evenly.

Here is what they will look like in the process: 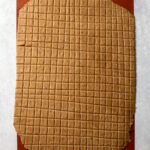 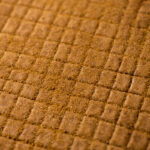 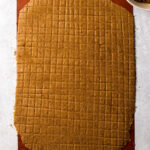 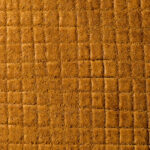 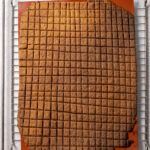 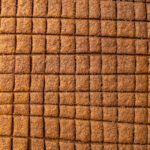 Once they’re cooked, take the batches out of the oven and let them cool down completely before breaking them up into squares.

Be sure to store your cereal in a big airtight container (I used a mason jar).

So far I can confirm that this Vegan Cinnamon Toast Crunch stays scrumptious for at least a week. So far it’s never lasted long in our house as we keep eating it all within 7 days! 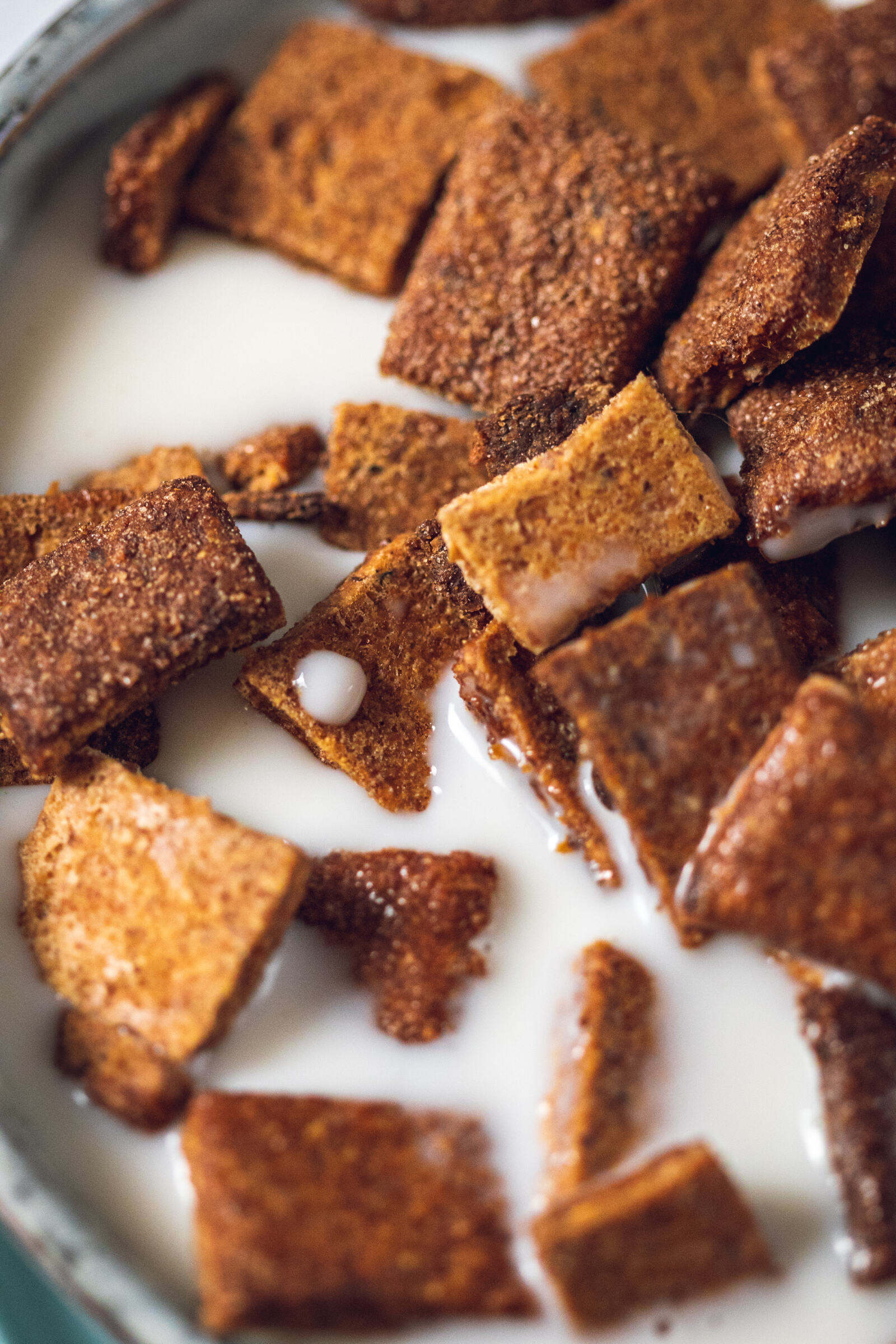 How to store homemade cereal?

It’s best to store this cereal in an air-tight container. As it’s dried, there’s no need to keep it in the fridge.

What’s the shelf life for this homemade cereal?

If dried completely, kept in an airtight container and away from any liquids, the cereal stays delicious and scrumptious for a minimum of about 2 weeks.

How do I make this gluten-free?

This recipe is super simple to make gluten-free, and I have also made this in a gluten-free version beforehand. Simply swap out the wholewheat flour for a gluten-free flour mix. It’s best to avoid single ingredient gluten-free flours – I have not had great experiences with using those in recipes like this one, especially almond flour and coconut flour are not the best for this type of recipe, but gluten-free flour blends made to be used in gluten-free baking are the best replacement. Create the rest of the recipe as per the instructions. 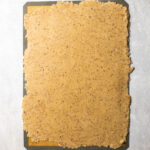 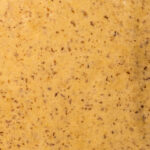 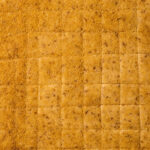 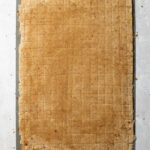 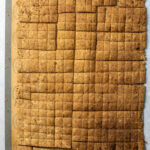 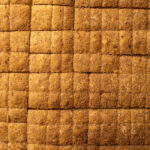 Yes, you can replace the brown sugar with a granulated sugar alternative, such as Splendia.

How do I roll out the dough thinly without the rolling pin sticking?

When rolling out the dough, simply use 2 sheets of parchment paper – one to place your dough ball onto, the other to cover it with. Use your rolling pin on top of the top sheets to roll the dough out thinly without the rolling pin sticking to it. I recommend using structured non-stick parchment as this is easiest to remove from the rolled out dough afterwards.

What type of milk is best with this cereal?

I personally think that any dairy-free milk alternative works beautifully with this recipe. Some of my personal favourites include homemade oat milk, coconut milk and soya milk. One thing I’d recommend is going with an unsweetened milk option, as the cereal already adds a bunch of sweetness by itself.

How do I best cut the cereal shapes?

Of course, you can use a long sharp knife to cut the cereal carefully, however, don’t run it through the dough, but instead place it gently down onto the dough to cut your lines. What works even better (and easier) in my opinion, is using a pizza cutter to carefully run it alongside the edges you’d like to cut. Do this gently and slowly with only a little bit of pressure applied, as you don’t want to cut all the way through the baking parchment.

Yes, feel free to experiment with your cereal shapes! Still, ensure to roll it out thinly, then carefully cut it out with the cookie cutters and remove the excess. You won’t be able to cleanly lift the cutouts off the baking parchment until after the baking process, so it’s best to cut them into shape on the baking parchment or baking mat.

Can I use coconut sugar instead of brown sugar?

Yes, absolutely, though it caramels slightly differently from brown sugar and the cereal will come out a little crunchier.

Can I use a sugar replacement instead of brown sugar?

Short answer: yes! As sugar replacements are often very different in weight and volume, however, I’ve found it best to measure it by volume and add 1/3 cup of the sugar replacement to replace the 1/3 cup of brown sugar. Depending on the type and brand you use, the conversion might be slightly different, however, so I recommend checking the packaging instructions to see how to most accurately convert the amount. I’ve tried this recipe with Splenda, measured by volume, and it’s worked out perfectly fine.

Looking for more delicious vegan breakfast recipes? Well good news, I’ve got plenty – here are some of my favourites: