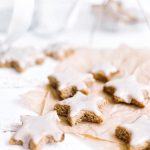 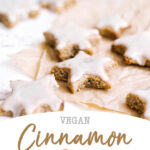 Deliciously sweet and nutty Vegan Cinnamon Stars Recipe – created in the style of the traditional German Christmas Biscuits ‘Zimtsterne’. Created with an almond and hazelnut base and with flavours of warming cinnamon and zesty lemon.

Today is the day: I’m going to introduce you to my absolute guilty pleasure when it comes to Christmas snacks. Say hello to these gorgeous cinnamon stars!

In Germany, where I grew up, they are a traditional sweet addition to any Christmas treats selection. They are widely available in-store in the pre-Christmas time (which for some stores seems to start at the end of August, crazy!) and they were my all-time favourites right up until 2014. Yup, you guessed correct: right up until I decided to change my diet for the better.

In most commercially created cinnamon stars, dried egg whites are part of the recipe – I guess to hold them together better, as they are created completely flourless. But let’s be honest: that’s not really needed and they work out just as well without the addition of egg powder. 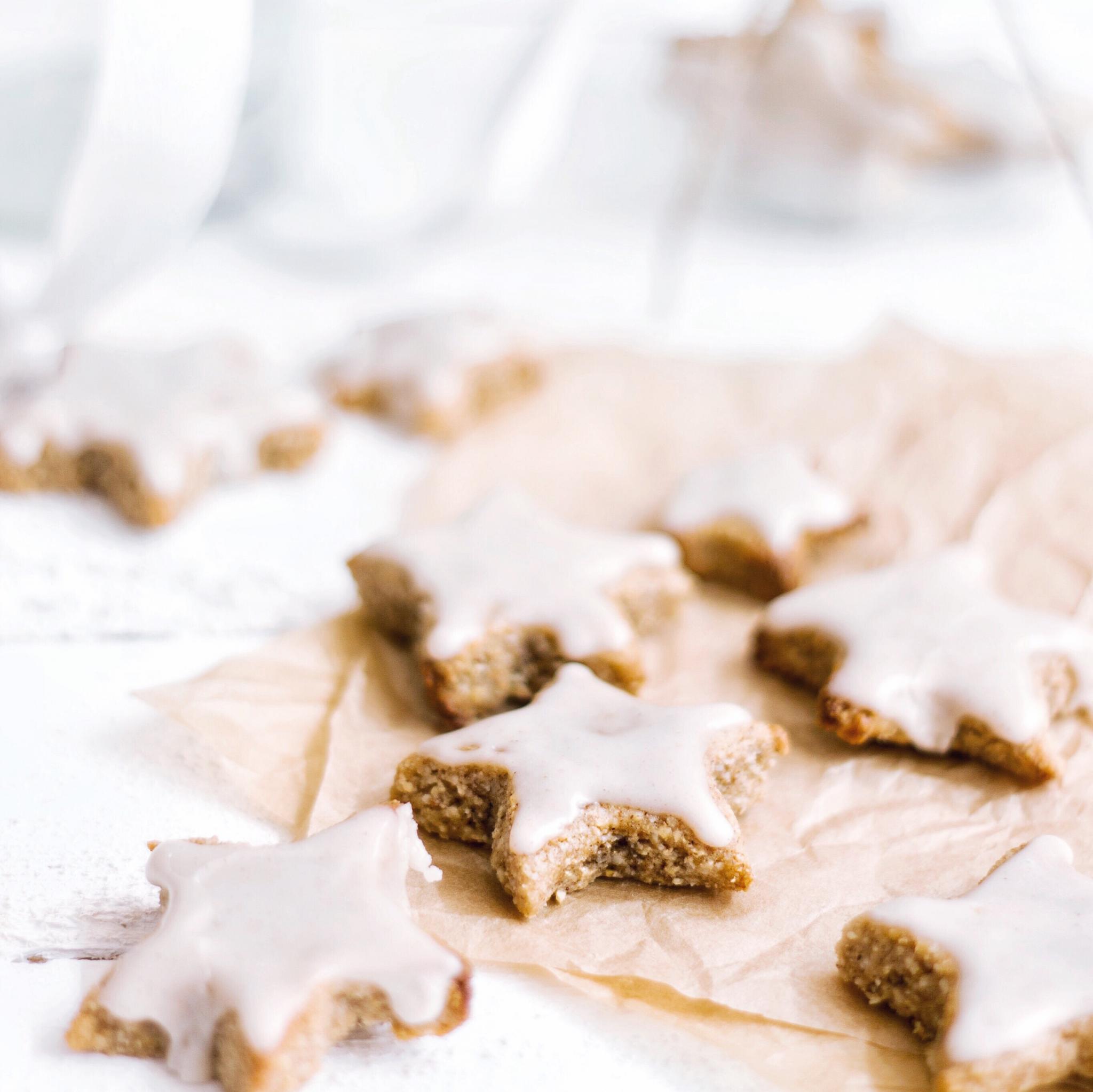 So here we are: Vegan Cinnamon Stars! Super easy and simple to create – and the ingredients are so few that you’re probably going to wonder why you haven’t stumbled across these before. Such a simple, yet delicious sweet treat!

What you need for this Vegan Cinnamon Stars recipe

How to make Vegan Cinnamon Stars from scratch

Creating the dough for the cinnamon stars

To create the dough base for these vegan cinnamon stars, simply combine all ingredients for the cookies in a large mixing bowl. It should result in a firm and slightly sticky dough, but you should be able to handle it with your hands. If it’s appearing a little too wet, simply add in a little more icing sugar to the mix until you get a texture you can work with.

Roll out the dough on a non-stick surface – I like using a silicone baking mat for these occasions, just make sure you can easily remove the cutouts from the surface later. Roll out the dough to roughly 1cm thickness.

Using star-shaped cookie cutters (preferably small ones) carefully cut out your Vegan cinnamon stars. Carefully transfer them to a separate baking sheet, assemble the excess, roll out again, and continue to create star shapes until you run out of dough. Set the baking sheets with the star cookies aside in a warm and dry place and allow for them to air-dry for roughly 4 hours. This step is very important to ensure that your cookies can firm up and stay in shape. Do not skip this step, otherwise, your cookies might turn out crumbly.

After 4 hrs, pre-heat your oven to 250C and place your cookies into the hot oven for 3-5 minutes. This is a high heat and quick baking process that we’re using for these cookies, so please stay nearby to keep an eye on your vegan cinnamon stars to ensure they don’t burn. The corners of the cookies shouldn’t burn either, so closely watch your cookies and remove them from the oven if they start to brown too much.

Set the baked cookies onto a cooling rack and allow for them to cool almost entirely.

In the meantime, prepare the coating for the biscuits: Simply combine icing sugar with some cinnamon and a small amount of plant milk (or water). I personally prefer to use plant milk for this as it gives a nice and white colour for your icing, whereas water would result in a more see-through icing for your cookies – down to your personal preference of course.

Here’s the ratio that I use for my icing:

Only add in a little liquid add a time and adjust with tiny amounts until your icing gets a thick but pourable texture.

Gently coat your cookies with the icing mix. You can so this by spooning small amounts onto the top of the cookies, or by carefully dipping them into the mix. Alternatively, you can also transfer the icing mixture to a piping bag with a thin pointy nozzle and pipe it onto your cookies. The latter often turns out to be the neatest looking option for this Vegan Cinnamon Stars recipe (and I’ve tried them all ;)).

Allow for the coating to set, then transfer your cookies to an airtight container or eat them immediately.

Deliciously sweet and nutty Vegan Cinnamon Stars Recipe – created in the style of the traditional German Christmas Biscuits ‘Zimtsterne’. Created with an almond and hazelnut base and with flavours of warming cinnamon and zesty lemon.

These homemade vegan cinnamon stars make the perfect Christmas gift! Who wouldn’t love to receive something so delicious and made with love?

More Christmas bakes to try out: