These vegan seitan steaks are purely next-level! Wonderfully juicy and with a chewy, meaty texture, I dare say they're even better than the real thing, but I might be biased 😉

With this recipe, you will be able to make the best vegan steak from scratch and you won't believe that the base for this recipe is: flour! Yes, you read that right - but trust me, this recipe has nothing to do with bread, so please read on to find out how to turn a bag of flour into tasty vegan steak.

There are plenty of delicious recipes out there when it comes to vegan alternatives, however, I think steak is still one of those ones that seem impossible to enjoy on a vegan diet.

Let's be real: vegan steak will never be just like real steak, no matter what anyone tries to tell you! We're not trying to 100% replicate anything here, but for me personally, this vegan steak recipe is simply delicious and works brilliantly as a replacement for me - and I am certain that loads of people will feel the same way, hence why I'm sharing it here with you.

At the end of the day, recipes like this one make it a whole lot easier to leave meat off your plate, and that's always a win!

Contents hide
1 Why this recipe works
2 What is vegan steak made of?
3 What is Seitan?
4 How to make Seitan?
5 Why the flour-washing method is better for steaks
6 Why would a vegan want to eat vegan steak?
7 Ingredients & Ingredient Notes
8 Equipment
9 Instructions
10 Serving
11 Substitutions
12 Variations
13 Storage & Making Ahead
14 Frequently Asked Questions
15 Related Recipes
16 Vegan Steak (Seitan Recipe)
17 Latest Recipes

What is vegan steak made of?

These vegan steaks are made out of seitan.

'What is seitan' you might ask, so here's a quick explanation: Seitan is made from wheat gluten, and it has been around for thousands of years. First detected in Asian cuisines, it was used by Buddhist monks as a protein source.

How to make Seitan?

There are 2 main techniques to making seitan from scratch, and I'll give you a brief outline of both methods here to explain the differences and why I chose 1 version over the other for this recipe:

Flour washing is the OG method when it comes to making seitan! In this method, a dough ball is created with flour and water. The dough ball is then kneaded under water to 'wash' out the starches. The wheat starch in flour is water solulable, so when the dough ball is kneaded and washed under water, these starches will be released into the water. What you're left with is a ball of gluten and this is the base for our steaks in this recipe.

As this is a dry flour, both dry flavors, such as herbs and spices, and liquid seasonings can be added to the gluten flour to create Seitan.

Apart from both methods being essentially different approaches, there are pros and cons to both of them.

Flour washing gives you full control over the composition of gluten and starch in your Seitan, but it's also more time and labor intense, especially as the seitan needs to rest between the different stages of the recipe.

When creating the dough ball, only water and flour are used - as adding other ingredients into the dough at this stage would be a waste when they're washed out right after. Flavor gets added into the washed flour through the cooking process, pan searing and braising in this case, and also with a flavor paste that includes loads of seasonings and spices. This flavor paste is blended into the seitan dough after the washing process and it requires the dough ball to rest in order to come back together.

One big pro for the flour washing method is the great texture, as it often brings out juicier, softer and chewy texture than the vital wheat gluten method does.

The pros for vital wheat gluten is that not much can go wrong when following a recipe, whereas flour washing requires a bit of practice. It's also quicker as the flavored seitan dough is created in the very first step, and the mixing, washing, blending and resting is skipped.

The method using vital wheat gluten often creates a denser texture, which might not be what you're after for all types of seitan recipes. It also comes with a particular 'gluten' taste, which is difficult to describe - but if you've tried vital wheat gluten a couple of times, you might know what I'm talking about! This flavor often needs to be overpowered with seasonings and other additions.

Why the flour-washing method is better for steaks

For this juicy steak recipe, I've chosen to use the flour washing method as it results in a juicier steak and honestly gives the best texture and also a great flavor for this recipe.

Why would a vegan want to eat vegan steak?

The most common misconception around veganism is that all vegans are vegan for the same reason and have the same opinions and preferences. This is far from the truth though: The vegan community is as varied as any other community in the world!

Whilst some vegans might be put off by the flavor and texture of meat, others used to really enjoy these foods before making a conscious choice to go vegan, e.g. for ethical reasons. Creating foods like this seitan recipe, gives those a chance to still enjoy the foods they like and/or grew up with, without compromising their ethical views.

For the Seitan base:

This seitan steak recipe is truly not complicated at all, but for best results, the seitan should rest in between the different stages. This will create the best texture!

Sure, resting will take a little more time than whipping some store-bought meat alternatives into the skillet - but it is so worth it, so be patient!

Start by combining the flour and water into a firm dough ball.

Knead it on a floured surface for 2 minutes, then set aside to rest for 15-20 minutes.

Place the dough ball into a large bowl and fill it with water until the dough is completely submerged. Set aside for 45 minutes.

Begin kneading the dough ball under water. This is called 'washing the flour. Drain and rinse the water 4-5 times, every time it gets super white and creamy. You should wash out the majority of the wheat starch, but not all.

This is what it should look like after. Don't worry if the dough begins to fall apart, it will come back together in the next steps.

Combine all ingredients for the flavor paste.

Transfer the washed dough into the food processor alongside the flavor paste and pulse 15-20 times or until the paste and dough are well combined.

Place the Seitan into a bowl and colander, drizzle with a little oil, cover the bowl and allow for it to rest in the fridge for a minimum of 2 hours, or up to 2 days.

Divide the Seitan into individual steaks, gently shape them between your hands, then heat the canola oil in a skillet or frying pan and place the Seitan inside. Lightly sear on both sides over medium-high heat.

Pour the stock and ale into the skillet, reduce the heat to medium-low and cover with a lid. Braise for 20-25 minutes, flipping the steaks halfway through.

Remove the lid and cook until the majority of the liquid has cooked off.

Drizzle the steaks with the soy sauce and remove from the heat after another minute.

Allow for the steaks to cool down. For the best texture, let them rest over night.

You could just pan-fry the steaks to heat them up, but I prefer brushing them with mustard, dusting them with a little flour and then panfrying in a little oil. This gives them an added layer of flavor and a delicious 'skin'.

Hint: To speed things up, you can mix your dough ball in the food processor with a dough hook. I regularly use my Magimix to put together the simple dough ball - and also to incorporate the flavor paste into the vegan seitan steaks, and it's making it all so much easier!

There are many delicious ways to serve these vegan steaks:

If you need to make a few ingredient swaps for this recipe, here are some tipps:

Feel free to add additional flavors to your seitan if you're in the mood for experimenting. Here are a few ideas:

You can store the cooked steaks in an airtight sealed container in the fridge for up to 2 days. The best way to store them after the braising process, right before the final pan frying and serving.

Alternatively, you can also store the washed and seasoned dough ball in the fridge for up to 2 days. During this time, the seitan will become firmer and chewier in texture, adding a decent bite to the final steaks!

Can I make vegan steak on the grill or barbecue?

Absolutely! When placing this seitan steak onto a barbecue or grill, just make sure to add enough oil to the skin of the steak to prevent it from sticking and use a drip tray underneath to catch any droppings.

My seitan dough looks like it's falling apart after washing, what to do?

This is normal! It will become super soft and shaggy and easily fall apart. It will come back together in the resting phase after blending in the flavor paste, so trust the process!

If you enjoy making homemade Seitan or similar recipes, then give these favorites from the blog a go: 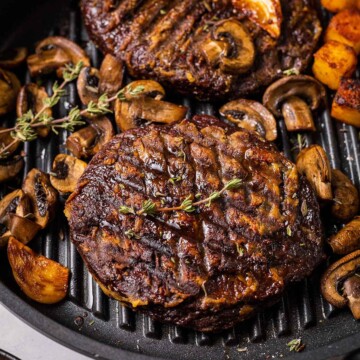