This Vegan Gyros "meat" is created with Seitan, which is made from washed flour - yes, you read that correctly! Find out more on how you can turn a simple flour dough ball into delicious vegan gyros in a few steps below!

If you've tried gyros before, you'll know well how flavorsome the meat version is! It's flavored with a number of herbs and spices to give it that defining taste.

I personally used to love eating Greek food! There were plenty of greek restaurants in my hometown in Germany and my family would visit for a meal out every now and then. Gyros was always one of my favorite things to order there - sometimes as a pitta wrap, sometimes loaded onto french fries and with a generous amount of tzatziki sauce over the top... this food truly brings back memories!

If you enjoy experimenting with Seitan, then check out some of my other Seitan recipes, such as Vegan Chicken, Vegan Steak and Vegan Kebab Meat.

Gyro is a seasoned meat of Greek origin, which is typically cooked on a vertical rotisserie grill and served shaved or thinly sliced. It's often stuffed and served in soft pitta bread alongside tomatoes, onions, potato chips/French fries, and a drizzly tzatziki sauce.

Traditionally, it's made with pork but also sometimes with chicken. Beef and lamb are often used as a base in other countries

Where does Gyros come from?

Whilst gyros is considered to have come from Greece, there are many similar cooking techniques that are thought to have originated in the Middle East, so it's difficult to be certain. Grilling on a vertical rotisserie was developed in Bursa around the 19th century during the Ottoman empire and called 'Doner Kebab'. Traditional Gyros uses the same technique of stacking meat in a vertical rotisserie. It is thought that immigration and population exchanges between Greece and Turkey have made the cooking technique popular around the globe after World War 2.

What is this vegan gyros made of?

This vegan gyros "meat" is made out of seitan, using the flour washing technique for the best taste and texture.

Seitan is made from wheat gluten, which is a protein found in wheat flour. It's often used in vegetarian dishes because it has a chewy texture similar to meat. Seitan has been around for thousands of years. First detected in Asian cuisines, it was used by Buddhist monks as a protein source.

How to make Seitan

There are 2 main techniques for making Seitan: Flour-washing and using store-bought Vital Wheat Gluten. Both techniques result in different Seitan flavors and textures, you can read a little more in depth about the differences in my Vegan Steak Recipe.

For this vegan kabob recipe, we're using the flour washing technique. It is based on creating a flour & water dough ball and then washing out the starches. Please read the instructions below in detail.

See recipe card at the bottom of this post for full quantities.

In a large bowl, combine the water and flour into a dough ball.

Knead the dough ball on a lightly floured surface.

Place the dough ball back into the mixing bowl and covered it with water. Set aside for 30 minutes.

Start kneading the dough ball under water to soften. Once the water gets white and creamy, drain, add fresh water and repeat 4-5 times or until the water gets only cloudy.

Rinse the dough ball and place it into a colander to drain excess water. This is what the ball texture should look like.

Combine all ingredients for the flavor paste.

Add the Seitan dough and the flavor paste to a food processor.

Pulse 5-10 times or until the Seitan and flavorings are well combined.

Place in a small bowl and store in the fridge for at least 2 hours or ideally over night. The texture will firm up.

Tightly wrap the Seitan in parchment paper and aluminum foil.

Steam the Seitan for 1 hour on medium heat.

Allow for the Seitan to cool down before carefully unwrapping.

Once the outside is lightly crisp and caramelized, secure the log with a fork and shave off vegan gyro pieces with a sharp knife.

Heat or grill the gyro pieces until you get the desired texture and you're ready to serve.

A few things you can serve with vegan and vegetarian gyros:

How to make a quick vegan tzatziki

A vegan tzatziki is super quick and easy to make! Let me show you how, in just a few simple steps.

Here's what you need:

To prepare the dairy-free tzatziki dip, finely shred the cucumber with a grater or a food processor, then transfer the shreds to a nut milk bag or a clean kitchen towel and squeeze out as much of the water as you can.

Transfer the cucumber shreds to a large bowl and stir in the salt, then allow it to rest for 10 minutes and squeeze out any releasing liquid again. Mix the cucumber & salt with the dairy-free yoghurt, lemon juice, garlic and fresh dill.

You can store the fried vegan gyro meat in an airtight container in the fridge for up to 3 days.

Place the vegan gyro pieces into a freezer bag and store them in the freezer for up to 3 months.

To reheat, simply defrost and briefly pan-fry the gyro pieces until the edges are lightly crispy.

Making ahead of time

If you're preparing the Seitan ahead of time, store the seasoned dough in the fridge - covered - for up to 3 days. For best results, use an air-tight container to prevent the Seitan from becoming dry. You can also store the Seitan after the steaming process for up to 3 days but what's important is to not exceed 3 days in total when making this seitan recipe.

To give this vegan gyro recipe the full flavor, I don't recommend making any substitutions. But here are some recommendations if you're missing an ingredient or two:

My seitan dough is falling apart after washing, what to do?

This is normal! It will become super soft and shaggy and easily fall apart. It will come back together in the resting phase after blending in the flavor paste, so trust the process!

Can I prepare this Seitan ahead of time?

Yes, you can! You can prepare the Seitan up to 3 days ahead of time. And store it in the fridge after seasoning or after steaming.

If you enjoy making homemade Seitan or similar recipes, then give these favorites from the blog a go: 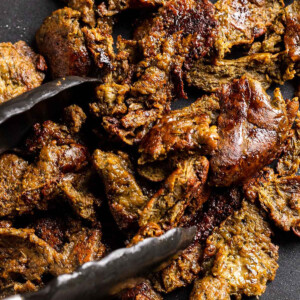 Creating the seitan base