Schnitzel is something I knew very well growing up in Germany and they were a big part of my childhood! It was my family's go-to dish for our Sunday meals and was often enjoyed alongside potatoes and vegetables, such as peas and carrots. With this vegan Schnitzel recipe you can fully enjoy a delicious meat-free Schnitzel!

What is a Schnitzel?

A Schnitzel is traditionally a very thin and boneless cutlet and it is normally made from pork, beef, veal or chicken. The thin cutlet is breaded and fried until crispy.

Where does Schnitzel come from?

Schnitzel is said to have originated in Germany (where I grew up!) but it's difficult to say for sure. There are a few sources that mention Schnitzel originally came from Austria, and we'll probably never know 100% who came up with it first.

What we know for sure is that the dish is found in multiple countries around Europe.

How is Schnitzel served?

Depending on the type of Schnitzel, it can be served in many different ways. The famous 'Wiener Schnitzel', for example, is served with lemon juice, and the well-known 'Jägerschnitzel' is served with a mushroom sauce.

In Germany, it is often served alongside boiled potatoes and vegetables, but it's just as delicious with roasted potatoes & Co!

What is Vegan Schnitzel made from?

This vegan Schnitzel recipe is made with a Seitan base and a crunchy breadcrumb coating.

Seitan is made from wheat gluten, and it has been around for thousands of years. It was first detected in Asian cuisines and was used by Buddhist monks as a protein source. It is often also referred to as wheat meat, vegan meat or meat alternative due to its firm, chewy texture that resembles meat.

If you want to find out more about where Seitan comes from, how it is made and what the different methods for making Seitan are, read this in-depth blog post about Vegan Steak, which goes into further detail.

See recipe card at the bottom of the post for quantities.

Place all ingredients apart from the vital wheat gluten for the Seitan base into a food processor.

Process until smooth, then swap the blade for the dough attachment. Slowly sprinkle in the vital wheat gluten and process until a dough forms.

Let the dough rest for at least 15 minutes

Spread out the dough flatly on a cutting board.

Cut the dough into 4 equal pieces.

Pull and stretch each Seitan piece.

Fold in the stretched pieces.

Then pull and stretch the next corner.

And fold it to the middle.

Repeat on all corners of the Seitan until you get a smooth Seitan dough ball when you flip it.

Place each dough ball on the cutting board or another flat surface and roll it to roughly 1/2-inch thickness.

Divide each dough piece in two pieces - or leave it to be one huge Schnitzel, down to you 🙂

Shape each Seitan Schnitzel to your desired shape with the rolling pin and your hands.

Pan-fry each Schnitzel in a little oil over low to medium heat. Just long enough until a thin skin forms on the Schnitzel. This will make it easier to handle the Schnitzel in the next steps without them sticking together.

Flip and fry on the second side too.

You can stack all Schnitzels on a plate whilst you're batch frying them.

With the lid on, cook the Schnitzels over low/medium heat for 1 hour, then let them cool down in the remaining broth for at least another hour, or over night.

In a shallow bowl, mix all ingredients for the coating including the non-dairy milk - apart from the breadcrumbs and the smoked paprika powder.

Whisk until you get a smooth batter.

Set up a breading station: the shallow bowl with the batter, 1 plate with all purpose flour and 1 plate with the breadcrumbs and smoked paprika powder mixed.

Place each cooked Schnitzel onto the plate with the flour.

Flip to thinly coat both sides. Shake off any excess.

Next, dip each Schnitzel into the batter.

Flip to evenly coat the Schnitzel all over and let any excess drip off.

Place the Schnitzel into the breadcrumbs.

Make sure to coat it all over.

Pan-fry each Schnitzel in just enough oil until crispy and golden brown all around and remove any excess oil with a paper towel.

Useful tip: traditionally, Schnitzel is often deep-fried, but with a good non-stick skillet, only a little oil is needed to fry the Schnitzel crispy - and it's just as delicious!

You can keep it simple and serve it like a "Wiener Schnitzel" alongside lemon juice or a slice of lemon or serve it alongside a delicious creamy mushroom sauce, like a 'Jägerschnitzel'. For more serving suggestions, check out the Variations section further down.

You can enjoy the vegan Schnitzel right after pan-frying or keep some for later:

The Schnitzels are best reheated by being pan-fried. If they are frozen, first allow them to thaw at room temperature for a few hours.

In case you don't have everything to hand, here a few ideas and notes for possible substitutions:

Schnitzels are traditionally seasoned very basic, usually just with salt and black pepper, but I already like to add the paprika into the game to add some flavor to the crust. Just like the real deal, this vegan Schnitzel can be served in a number of different ways, such as different toppings and sauces to give them variety:

You can also serve these homemade vegan cutlets without breading!

If you love trying new Seitan recipes, then definitely try this Vegan Turkey Roast (it's a whole vegan turkey!), or this Döner Kebab-style Seitan. This vegan chicken recipe is also a great base recipe and the chunks can be served with a variety of sauces or added to other recipes for some extra vegan protein. And for a real treat, try these vegan steaks! 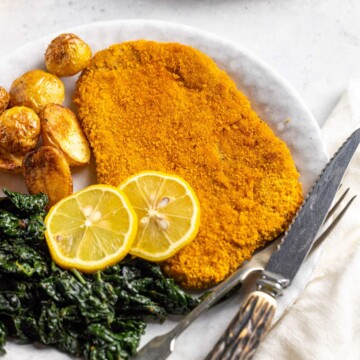 For the Seitan dough: