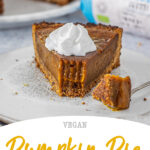 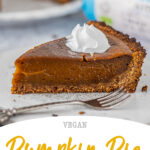 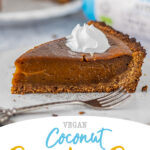 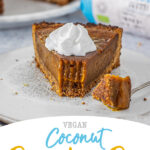 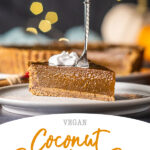 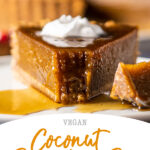 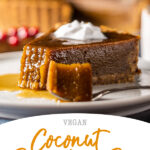 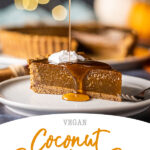 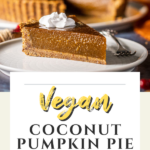 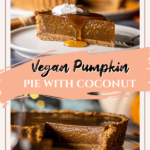 Deliciously smooth and creamy Vegan Coconut Pumpkin Pie Recipe – created with a crunchy biscuit base made from vegan-friendly biscuits and softened dates. 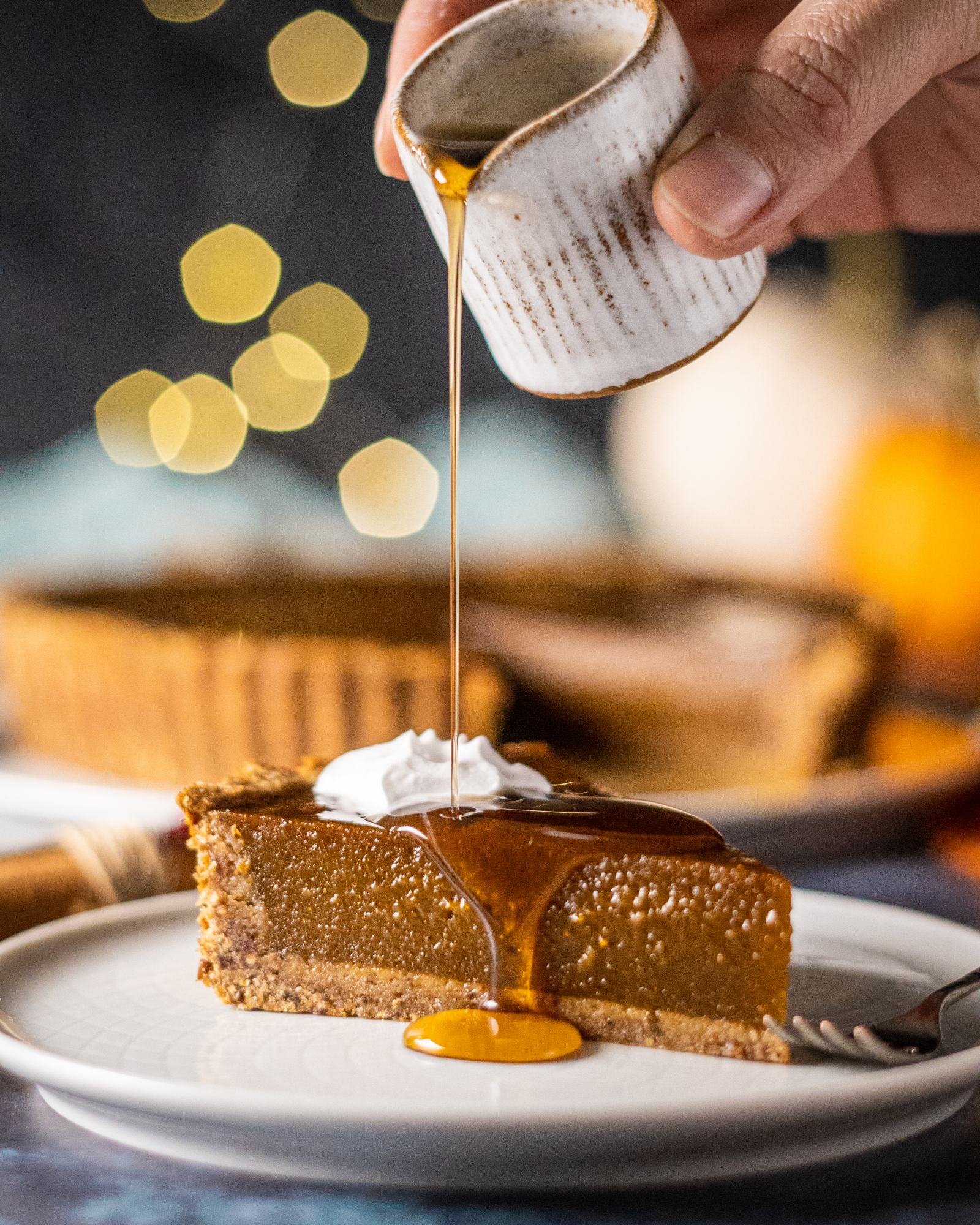 This Vegan Coconut Pumpkin Pie Recipe is easy to make and is a wonderful seasonal dessert. Well, it’s delicious at any time of year really but it works especially well in the colder months as the ginger and nutmeg give it a warming kick!

Don’t worry if it’s your first time making a pumpkin pie, it really is super easy! 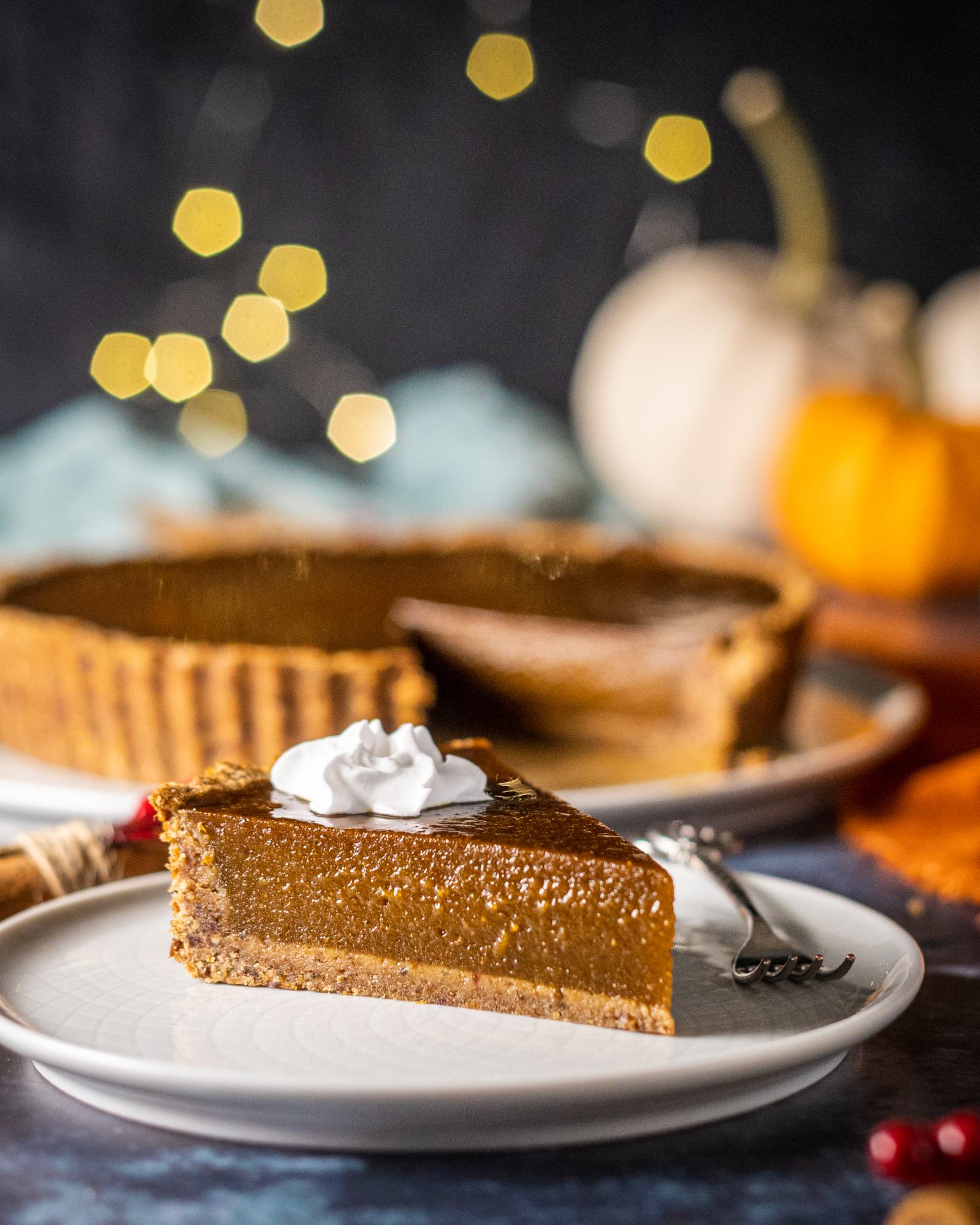 How to make a vegan biscuit base

For the biscuit base in this vegan coconut pumpkin pie recipe, I’ve used a pack of Mr Organic biscuits. Their packs come to 250g, so if you don’t have access to this particular type of biscuit, you can simply replace them with another vegan biscuit of your choice. I would recommend a Hobnob kind of biscuit with multi-grains. If you pick a biscuit with a more dominant flavour, be aware that it can change the flavour of your pie.

The two main ingredients in the base are the biscuits and fresh and juicy Medjool dates. Make sure the latter are softened and have their pits removed beforehand, so you’re ready to start with the recipe. If your dates are very hard, try placing them into hot water for a few minutes to soften. Simply transfer the biscuits and the softened dates to a food processor and pulse until the dates are broken down and combined with the biscuit crumbs to form a crumbly dough. If the mix is a little too dry – it can happen if your dates were a little less juicy or smaller or also if you use a dryer type of biscuit – add a little bit of water, one teaspoon at a time until your dough is crumbly but slightly sticky.

Remove the mix from the food processor and press it into a greased pie tin (grease with a little coconut oil, ideally!) to shape the bottom and sides of your pie.

I usually create my biscuit pie crust with 5 to 10 mm thickness. Place the pie tin into the fridge whilst you’re preparing the filling – the cold will help the crust harden in the meantime. 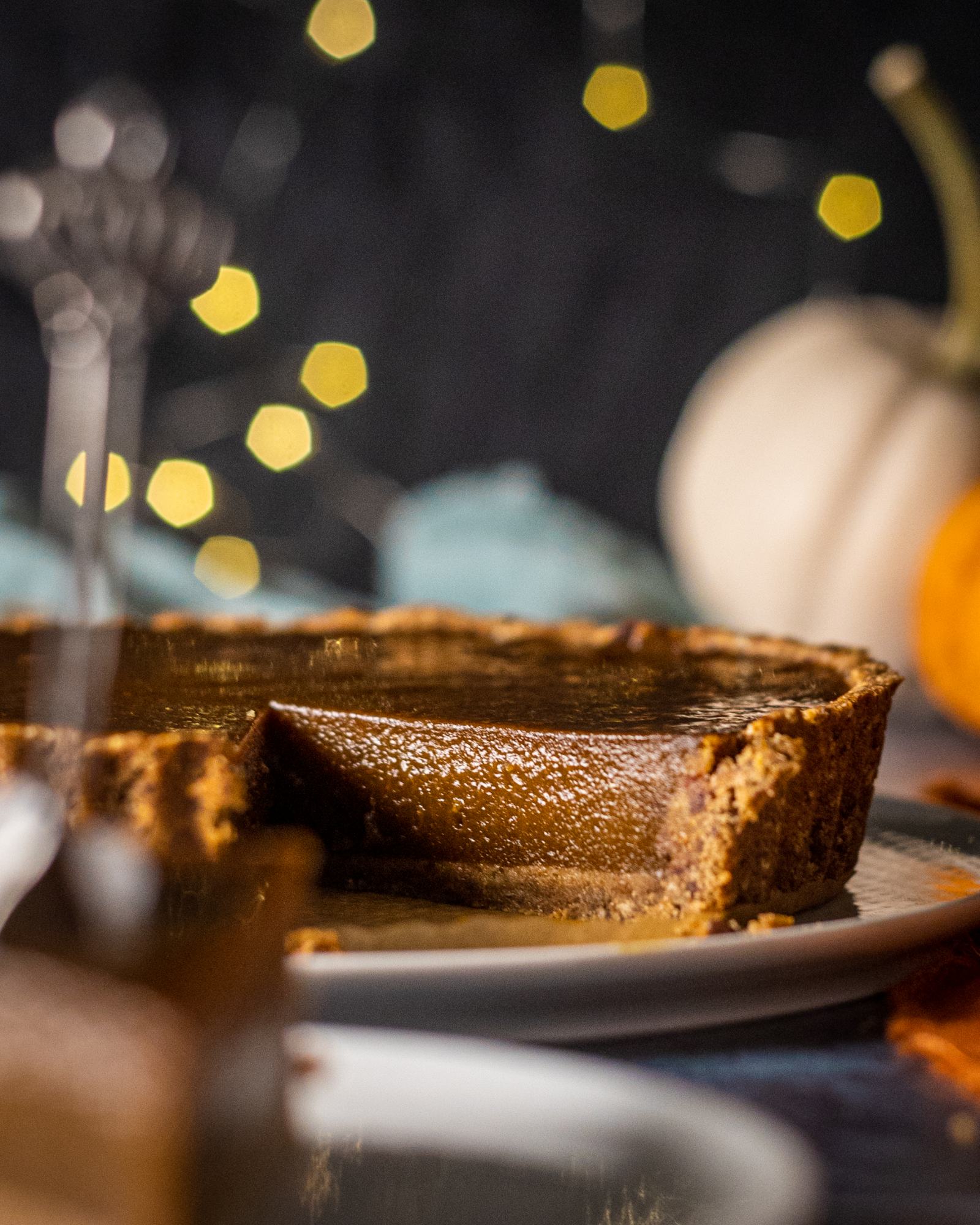 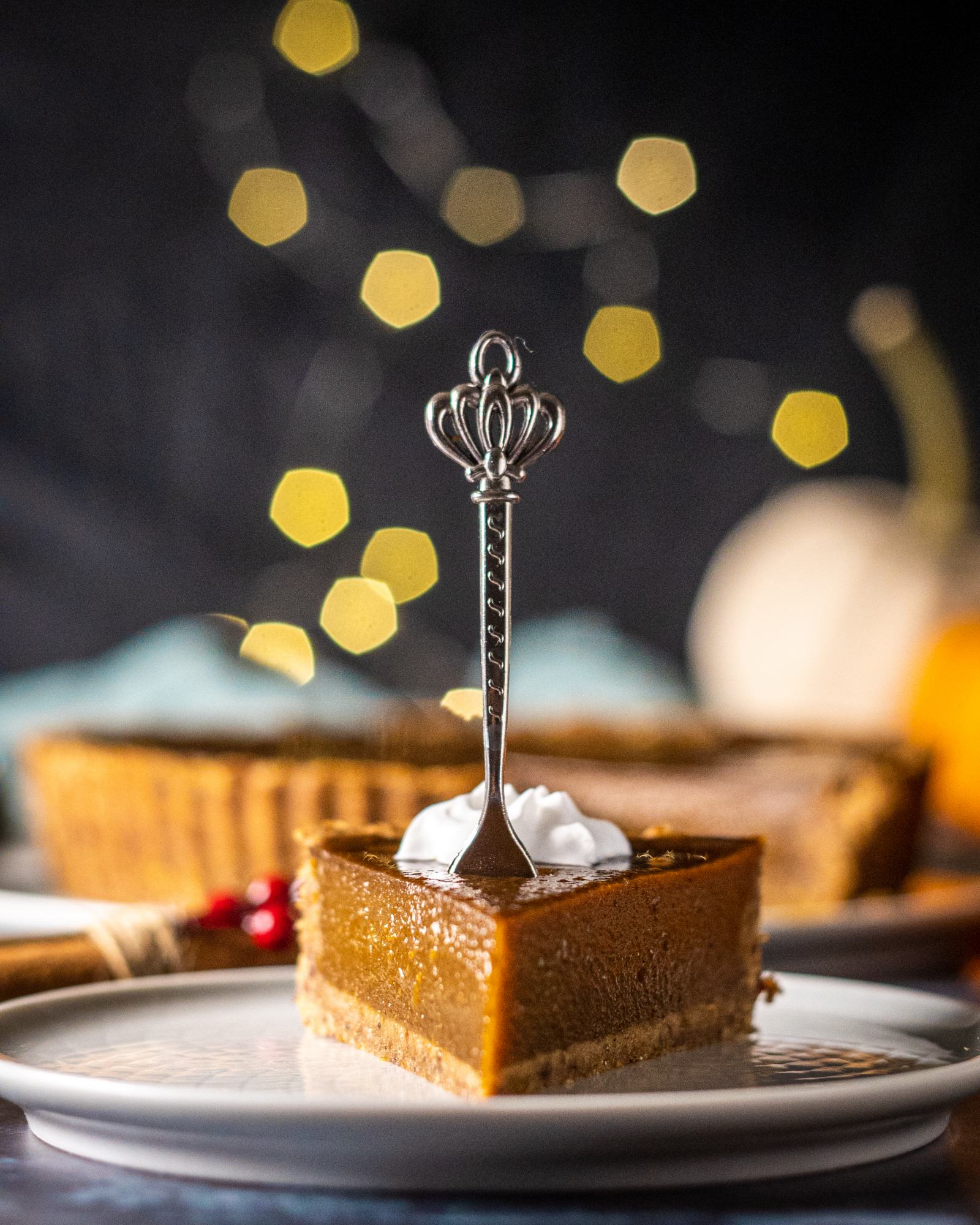 In a large mixing bowl combine pumpkin puree and coconut milk. Add in the sugar and stir until dissolved, then add in the spices: cinnamon, ginger, nutmeg and clove as well as a pinch of salt (this will help bring out all the flavours in the pie).

Whisk in the cornstarch last, and mix until no lumps remain – I have used an electric hand whisk on this occasion, as it makes it much easier to get a smooth result. Pour the mix into the pie base and transfer the pie into the preheated oven (175ºC/350ºF) and bake in the middle of the oven for 25-30 minutes.

Allow for the cake to cool down completely before cutting into it – serve it with some dairy-free whipped coconut cream or caramel sauce. 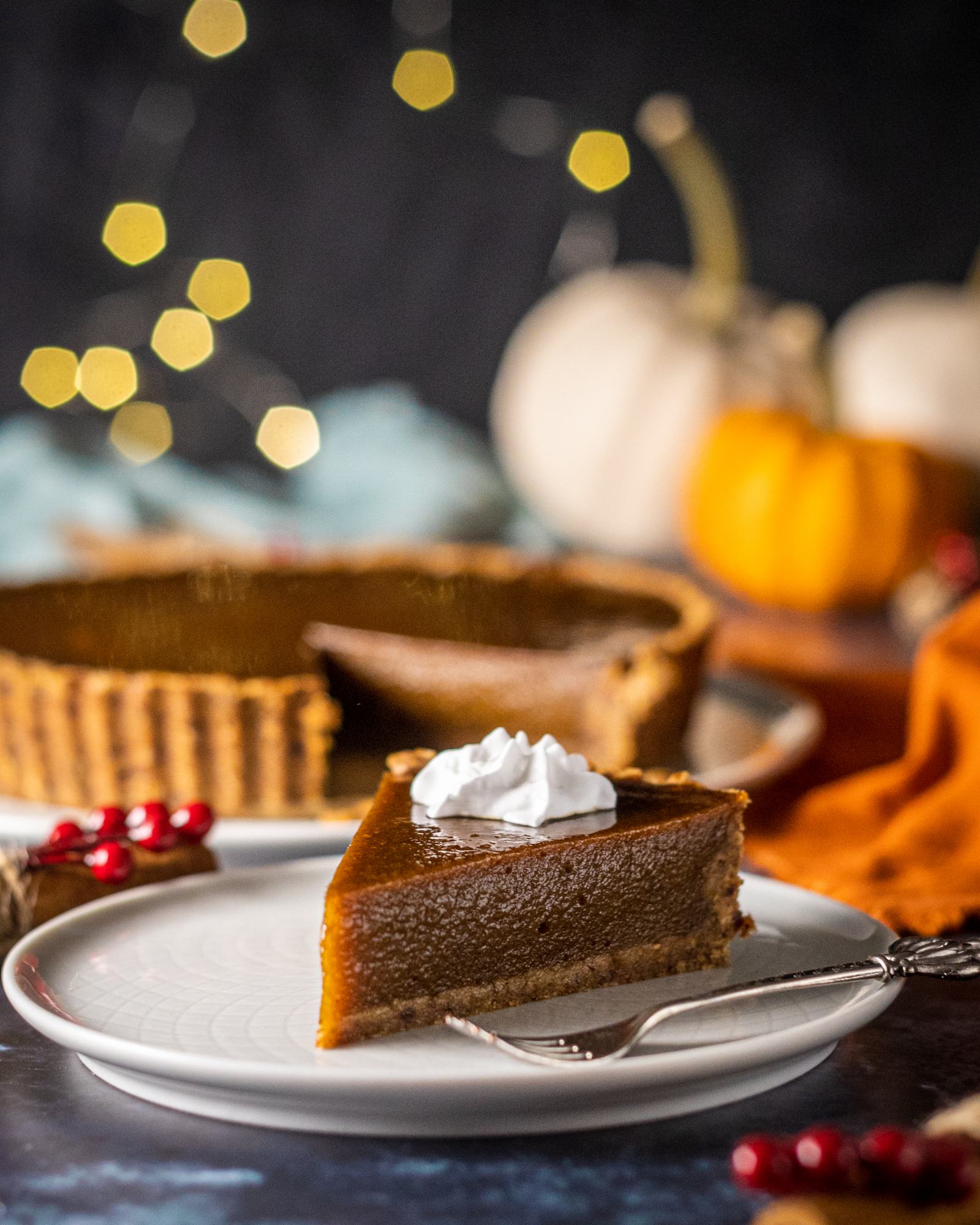 Delicious vegan coconut pumpkin pie recipe – with a creamy coconut and pumpkin filling and a crunchy biscuit base.

Feel free to use a different type of vegan biscuit for the biscuit base. For the recipe to work out, however, use a variety without any filling of big chunks.

Instead of cornstarch, you can also use Vegeset for a firmer texture. I’ve tried both making this recipe and they both turn out delicious! When using Vegeset, I’ve added about 1.5 tsp to the mix.

To smooth out the top of the pumpkin pie, you can also carefully tap your pie tin onto a kitchen surface or use a pallet knife.

Also, check out these pumpkin-inspired recipes: