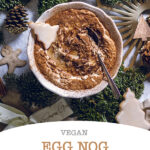 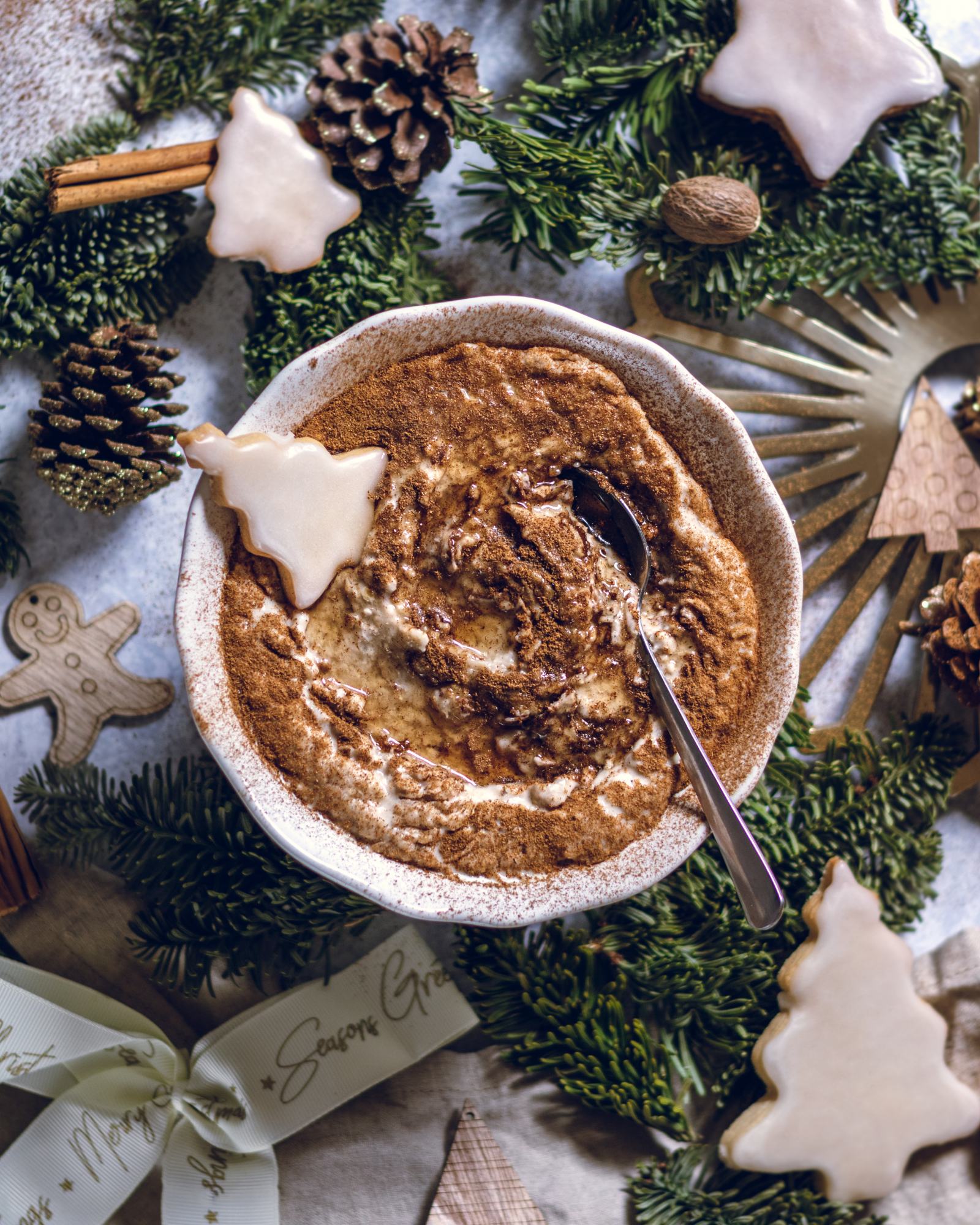 Vegan Eggnog Porridge, anyone? And yes, there’s no booze in this one – but you do you! 😉

I’ve loved getting onto the vegan eggnog train this Christmas – I’m simply obsessed with the creamy texture and festive flavours. If you love the flavour of eggnog just as much, but want to enjoy it without alcohol, then try out “Rum-ish” which is an alcohol free version of rum – and tastes incredibly similar! I’ve used it  in my vegan oat milk eggnog recipe and also have to admit that I’ve added a tiny bit to this Vegan Eggnog Porridge creation. And it was a dream! 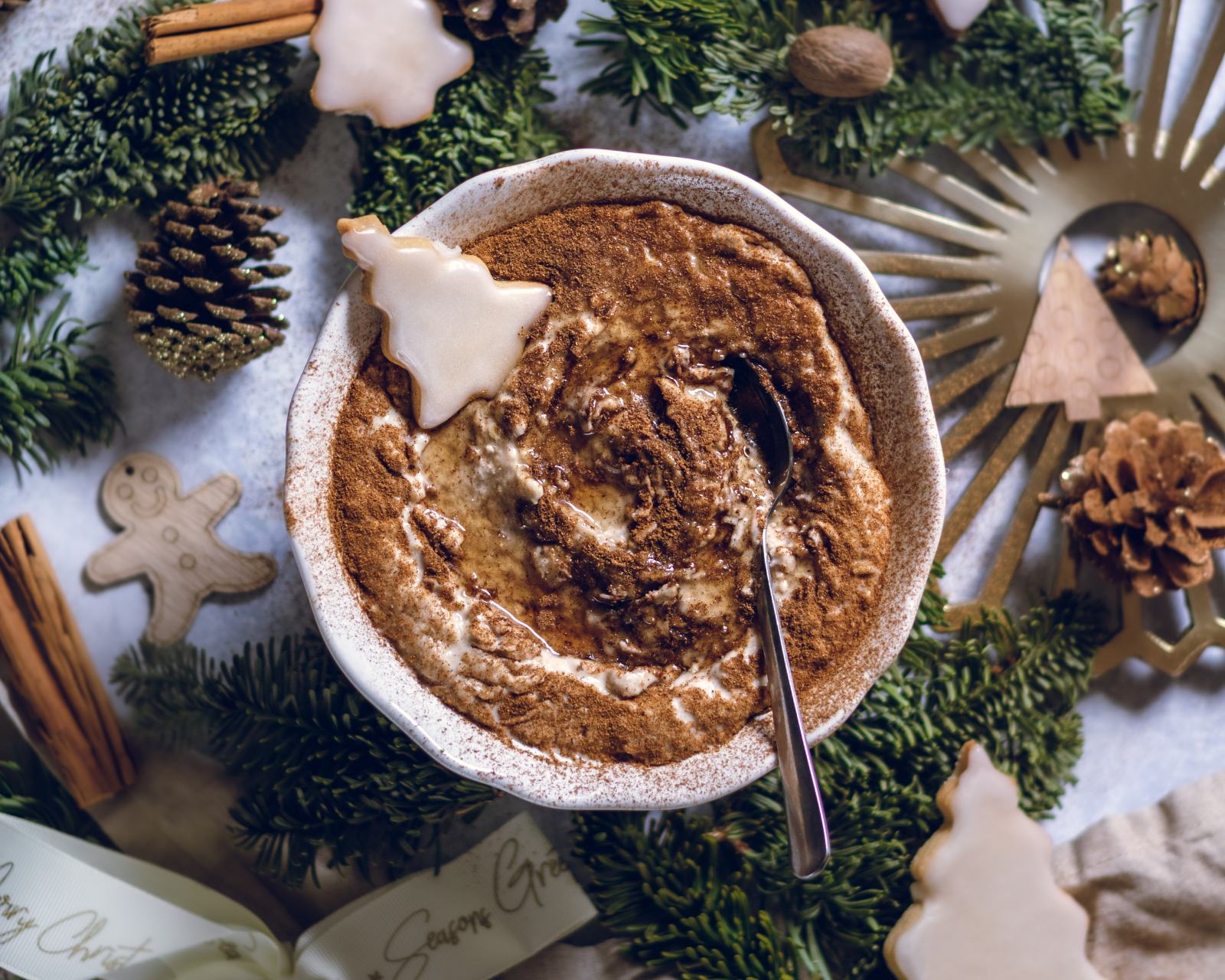 The creamy base for this Vegan Eggnog Porridge

If you’ve ever tried eggnog, you probably remember the super thick and creamy texture – and that’s exactly what I’ve tried to replicate in this vegan porridge recipe. I don’t know about you – but I love my porridge extra creamy. So if you’re on the same side, this porridge recipe is right up your street!

There are three elements on this recipe that create the creaminess of this porridge:

As a porridge lover (which you probably are if you’re reading this recipe, ha!) you probably know that oats + liquid easily creates a gloopy, but creamy texture, so using proper porridge oats are number 1 that makes this porridge super creamy. I addition with oat milk, it’s just the double whammy oat power you’re getting here!

And if you’re gluten free – don’t worry, simply swap your oats for the gluten-free version (works just as well!) and swap out the oat milk for almond or cashew (or simply your favourite!).

How to get soft cashews quickly

You might know similar creamy  recipes containing cashews, that might require soaking overnight (or for 4-6 hours) but I understand that ‘ain’t nobody got time fo dat’ in the morning. So here’s the quick version: Simply place the cashews into boiling water and leave them aside for 20 minutes. In the meantime you can take a shower, do some yoga or a meditation or braid your daughters hair. Simple!

The heat from the water will soften the cashews super quickly. This is a great trick to get soft cashews quickly without having to wait 4-6 hours before you can proceed with your recipe.

If you’re worried about preserving the nutrients from your cashews, you can of course place them into water inside your fridge the night before and simply start with step 2 of the recipe. 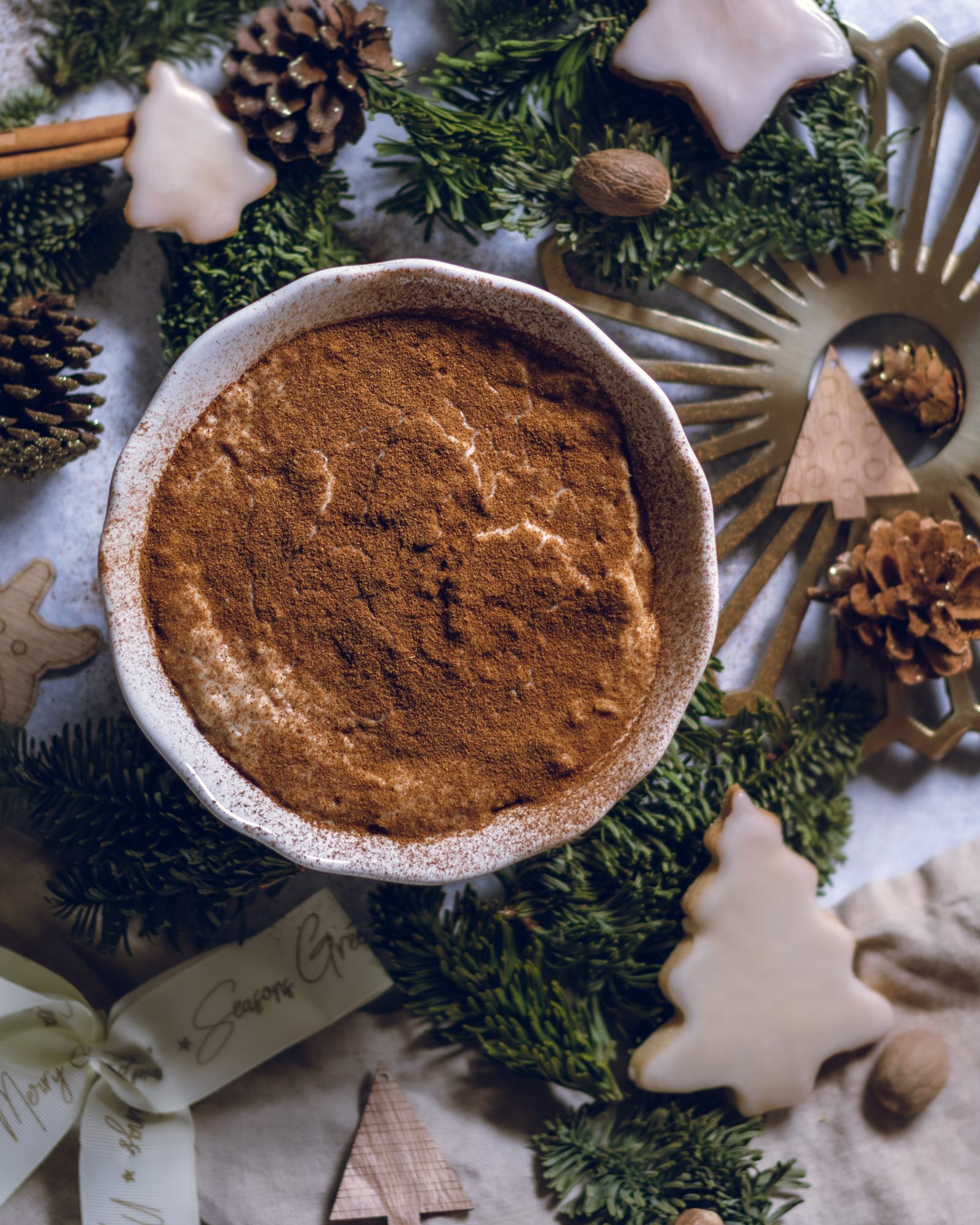 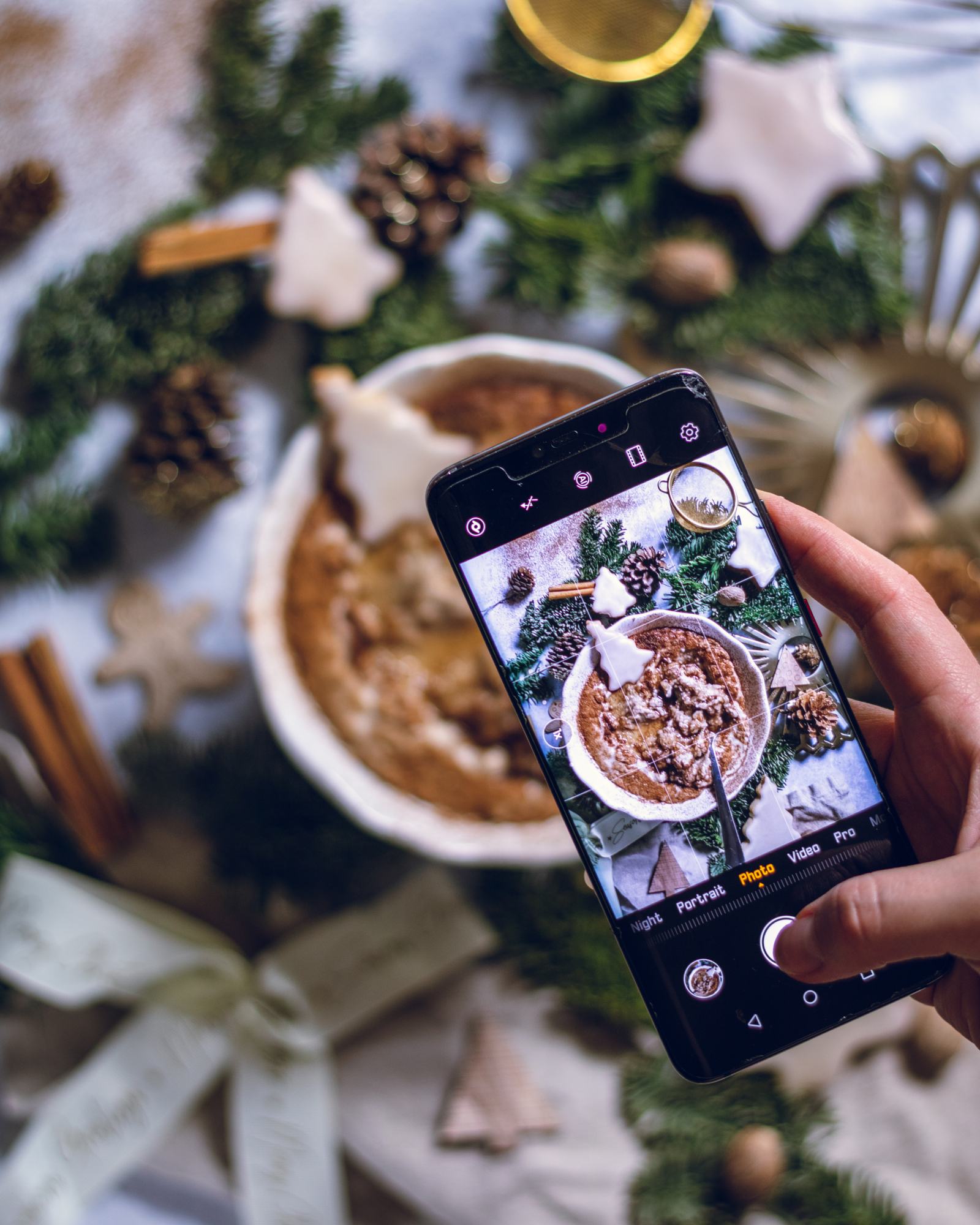 Easy Vegan Eggnog Porridge recipe – without the booze of course! Topped with a delicious layer  of cinnamon and maple syrup for sweetness. Simply dreamy and delicious! 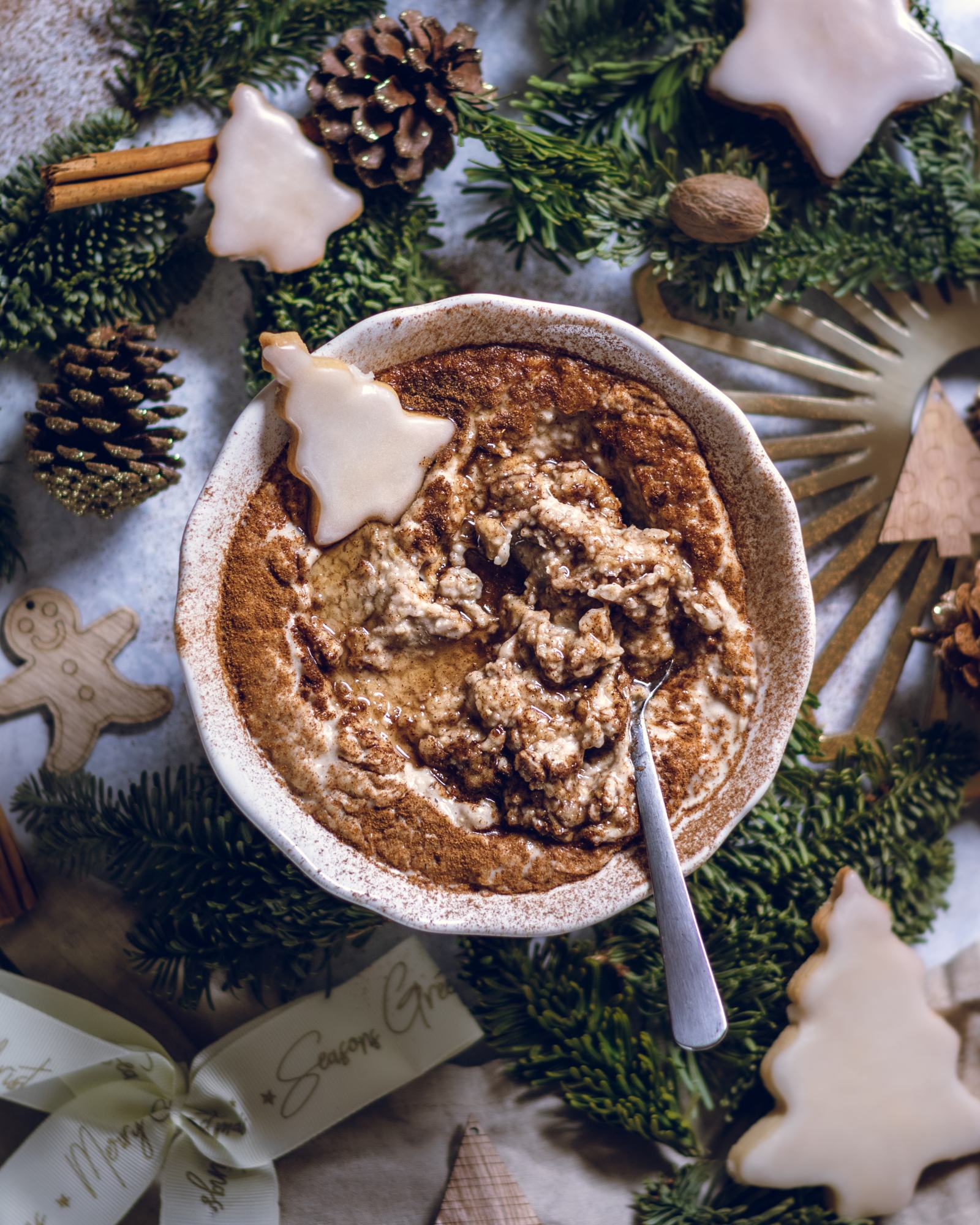 The ideal plant milk to use in this recipe is oat milk (I love Oatly!), but if you prefer gluten-free, you can simply swap it for your favourite plant milk. I would recommend almond or cashew, but others are also welcome (they might just change the taste of this recipe a little more!)

Looking for more festive ideas? Check out my section for Holiday Recipes!