Whilst Halloween is more and more picking up in Europe and the UK – the whole pumpkin hype is still a little behind over here, I have to admit!

Similar to the difficulties of finding pumpkin spice in store, up until last year I have never seen ready-made pumpkin puree in a UK store – and believe me I’ve been in loads! For probably 2-3 years of constantly seeing amazing pumpkin recipes online that called for pumpkin puree I already thought I had to accept that I simply can’t get a taste of these delicious looking pumpkin recipes.

But hey: It should be possible to make my own, right? That’s pretty much the thought process I followed and I found myself in the kitchen with plenty of pumpkin to experiment with in late 2017. The reason why I’m only just sharing this recipe now is simply because pumpkin season was already nearly over in 2017 by the time  I had figured it out – and also I wasn’t sure whether I was maybe the only person not knowing how to make the puree. After all, I didn’t grow up in the UK and wasn’t sure how familiar people are with it.

To be honest, as I found creating the puree is actually super simply – it’s probably preserving it that’s the more difficult part. But I also have some tips on that for you below! 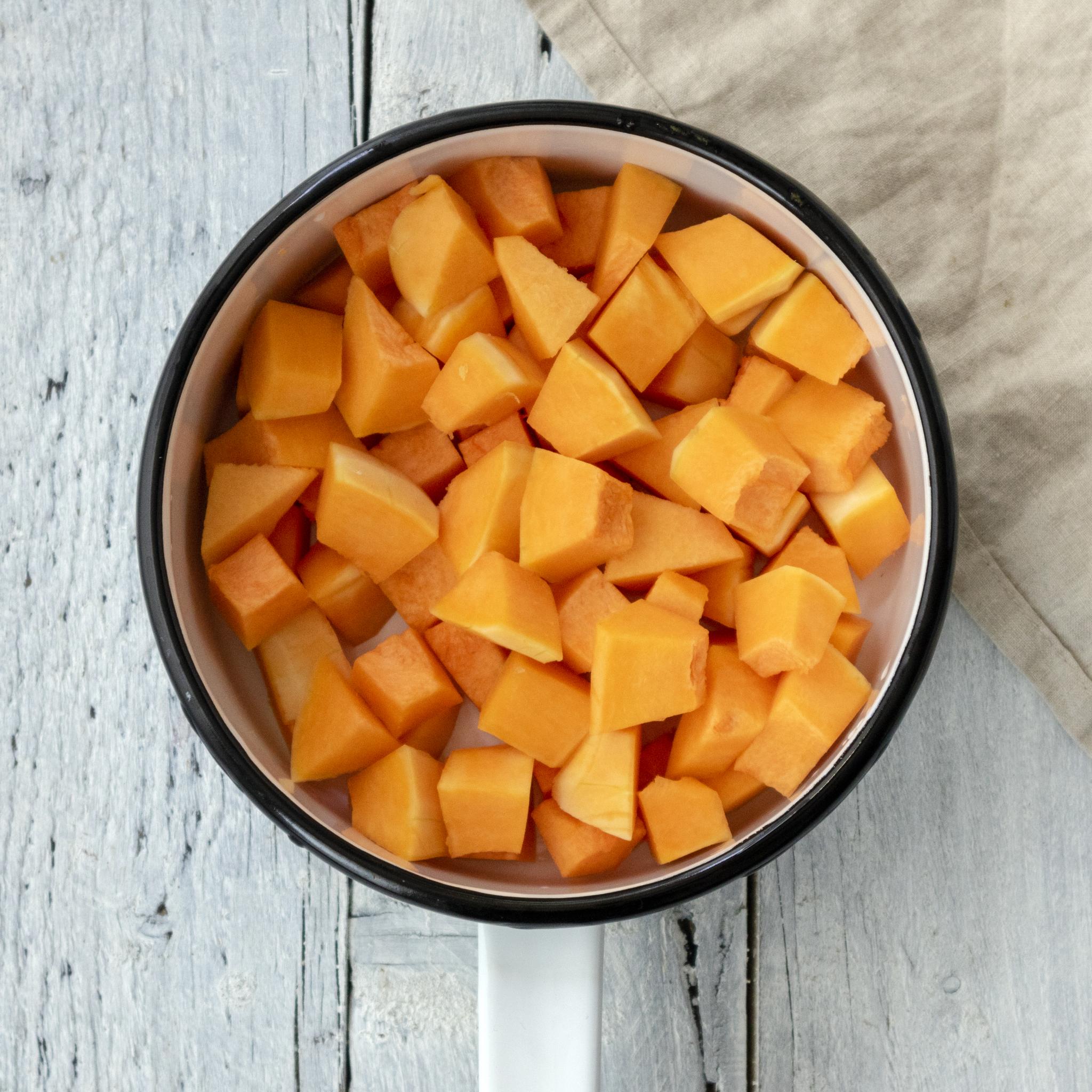 Pumpkin + water – simple as that!

1. Start by washing your pumpkin, cutting it in half and removing the seeds.

2. Chop the pumpkin halves into slices and peel the skin using a potato peeler – this is easier once the pumpkin is sliced.

3. Cut the slices into bite-size chunks and transfer them into a big saucepan.

4. Pour in the water until the pumpkin pieces are just about covered and place the saucepan on the stove over medium heat. Cook the pumpkin for about 20 minutes or until soft. A big part of the water will evaporate as well in the process.

5. Transfer the soft pumpkin pieces & remaining water to a blender and blitz until smooth, then transfer the puree back to the saucepan and continue to cook over low heat until the puree thickens (about 10-20 minutes). During this time continue stirring. 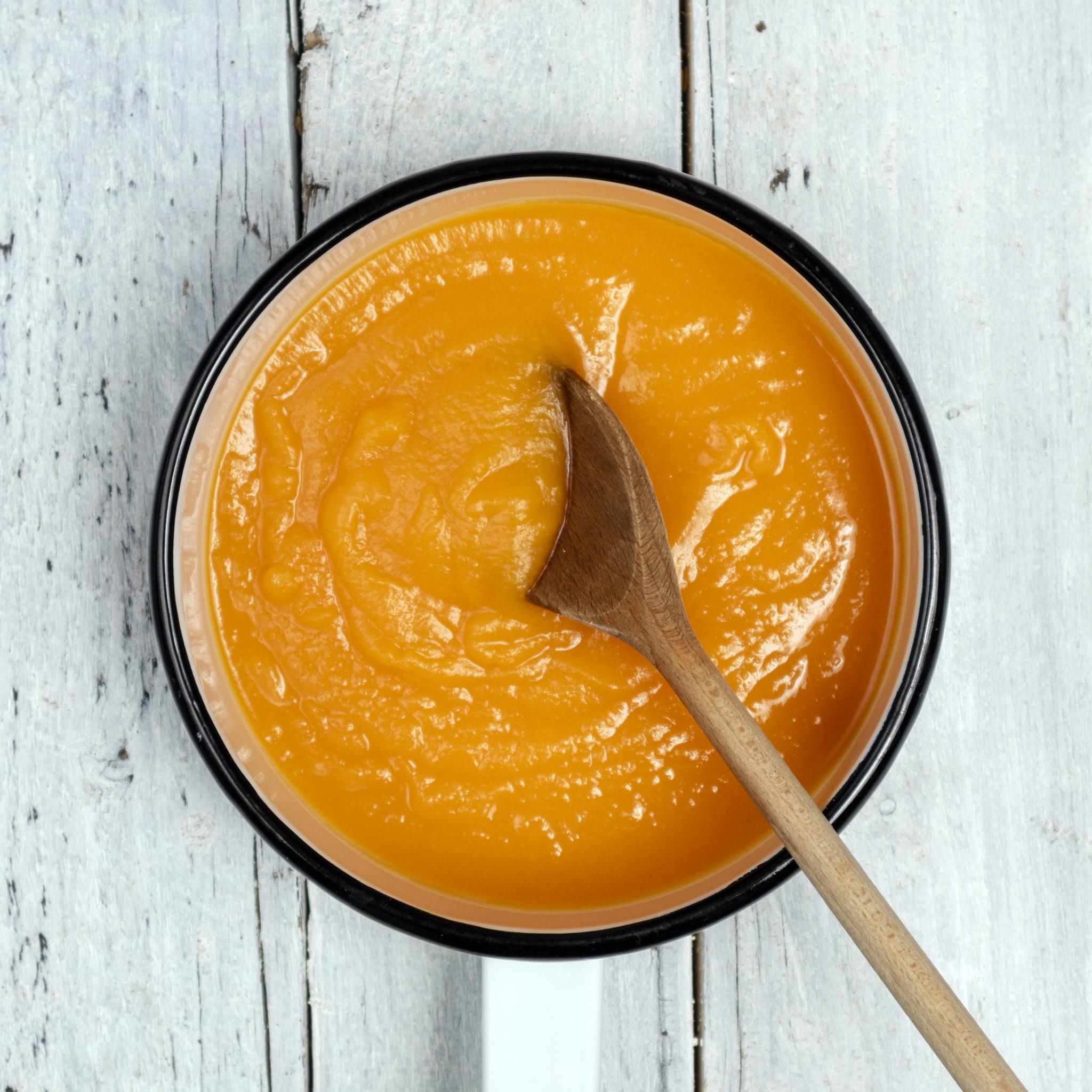 The puree will keep in the fridge in a clean & airtight container for about a week. If you use smaller amounts of the puree in the meantime, make sure to use a fresh & clean spoon each time, as the puree can go off if any other particles come into it.

If you’re planning to keep the puree for a couple of weeks, but don’t fancy freezing it, simply sterilise a mason jar by placing it in the sink and pouring boiling water from the kettle into it. Use a dishtowel to carefully pour out the glass – without touching the inside of the jar with your hands or the towel. Repeat the same with the lid for the mason jar, then carefully transfer the puree into the sterilised jar, close the lid and turn the jar upside down. Let it cool down in this position, then flip it back upright and store the puree in the fridge (it’s supposed to be fine outside the fridge until opened again actually, but as I’m highly allergic against mould spores, I’ve always been super careful with anything going off ;))

There’s so much to do with this puree! You can use it in soup (check out thisWarming Pumpkin Soup with Cinnamon Recipe!) or in a deliciously seasonal pasta dish.

In combination with this homemade Pumpkin Spice Mix  it’s also perfect for that vegan Pumpkin Spice Latte, you’ve been trying to make yourself – or Pumpkin Spice Porridge… or waffles… or pancakes… 😉

Would love to see your creations – it would be amazing if you would tag me (@romylondonuk) if you created something delicious with your pumpkin puree!