These brownies at the spice into pumpkin spice! Made with a vegan brownie batter and topped with a vegan pumpkin cheesecake mixture, simply divine! 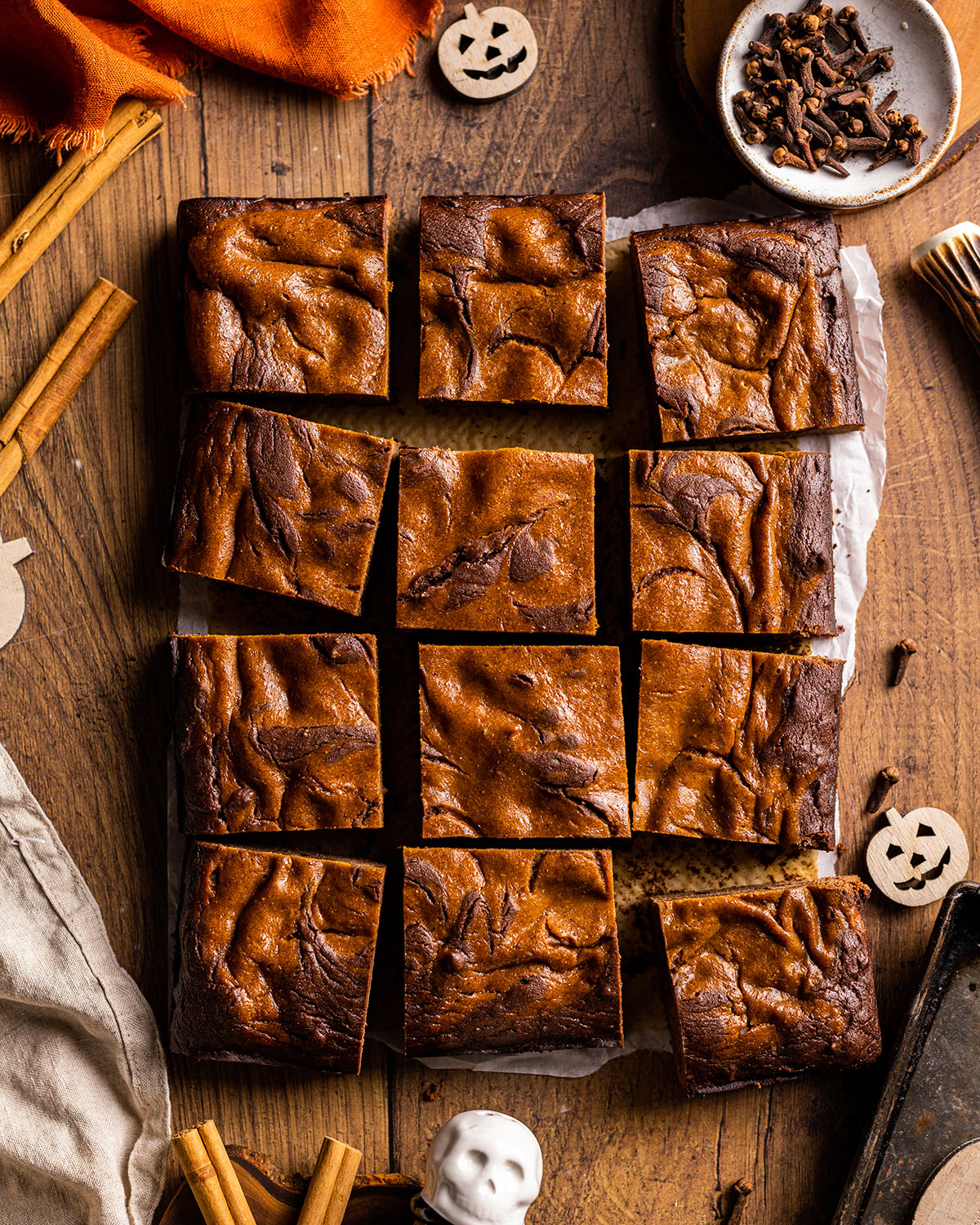 When it comes to baking, one thing is definitely true: I love a good brownie! These vegan pumpkin brownies are a combination of three of my favourite things – cheesecake, pumpkins and vegan brownies! I’m sure I don’t have to tell you, that these brownies are simply perfect for the autumn season!

This recipe is created with a vegan brownie base, made with melted vegan chocolate and cacao powder, and topped with a vegan pumpkin cheesecake mixture, that is swirled onto the brownies before they are transferred to the oven. The creamy texture and light flavour of the pumpkin cheesecake cuts wonderfully through the chocolatey and intense flavour of the brownie, making it the perfect combination.

I hope you will enjoy this brownie recipe just as much as I did, whether it’s during the autumn season or any other time of the year. 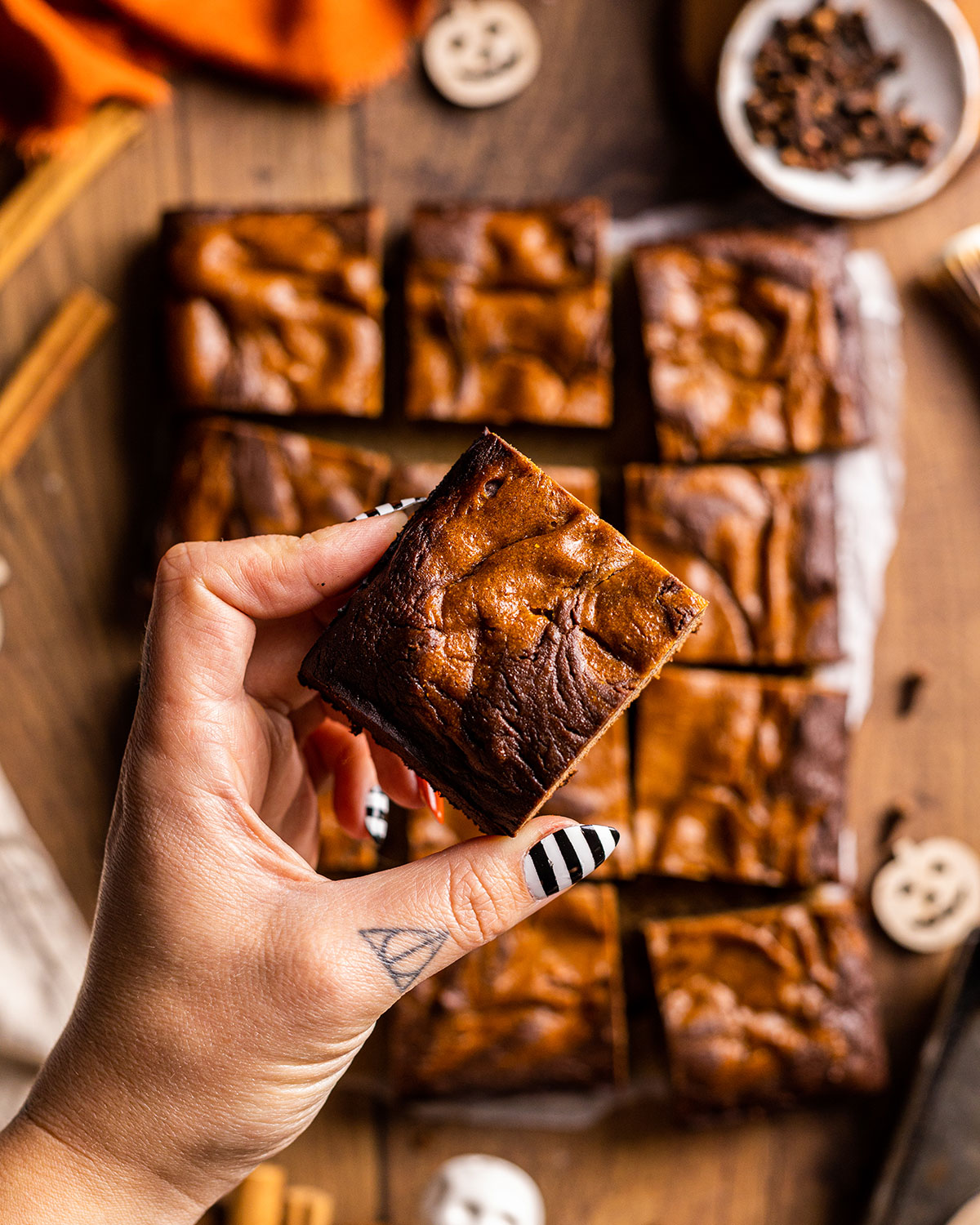 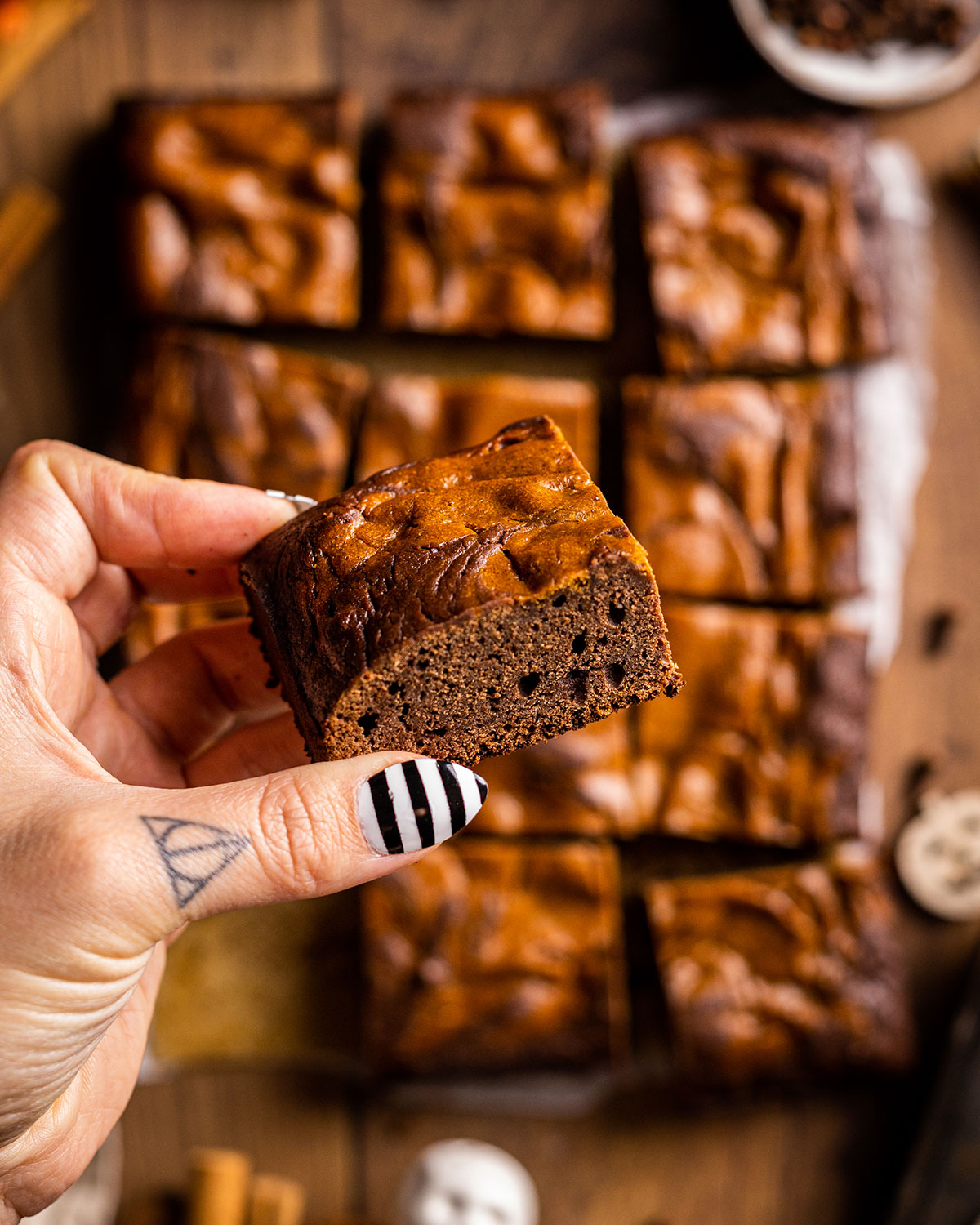 For the pumpkin mix: 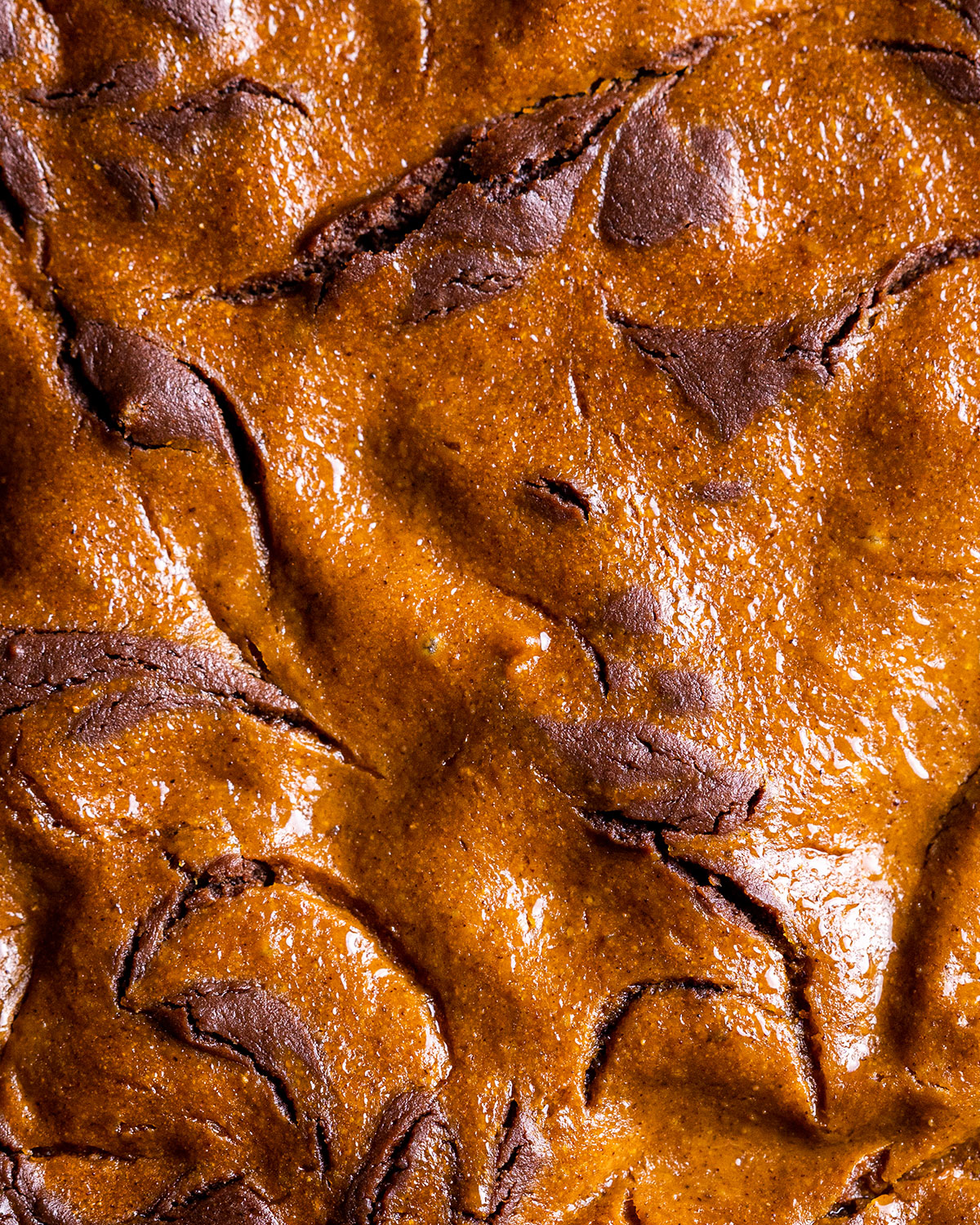 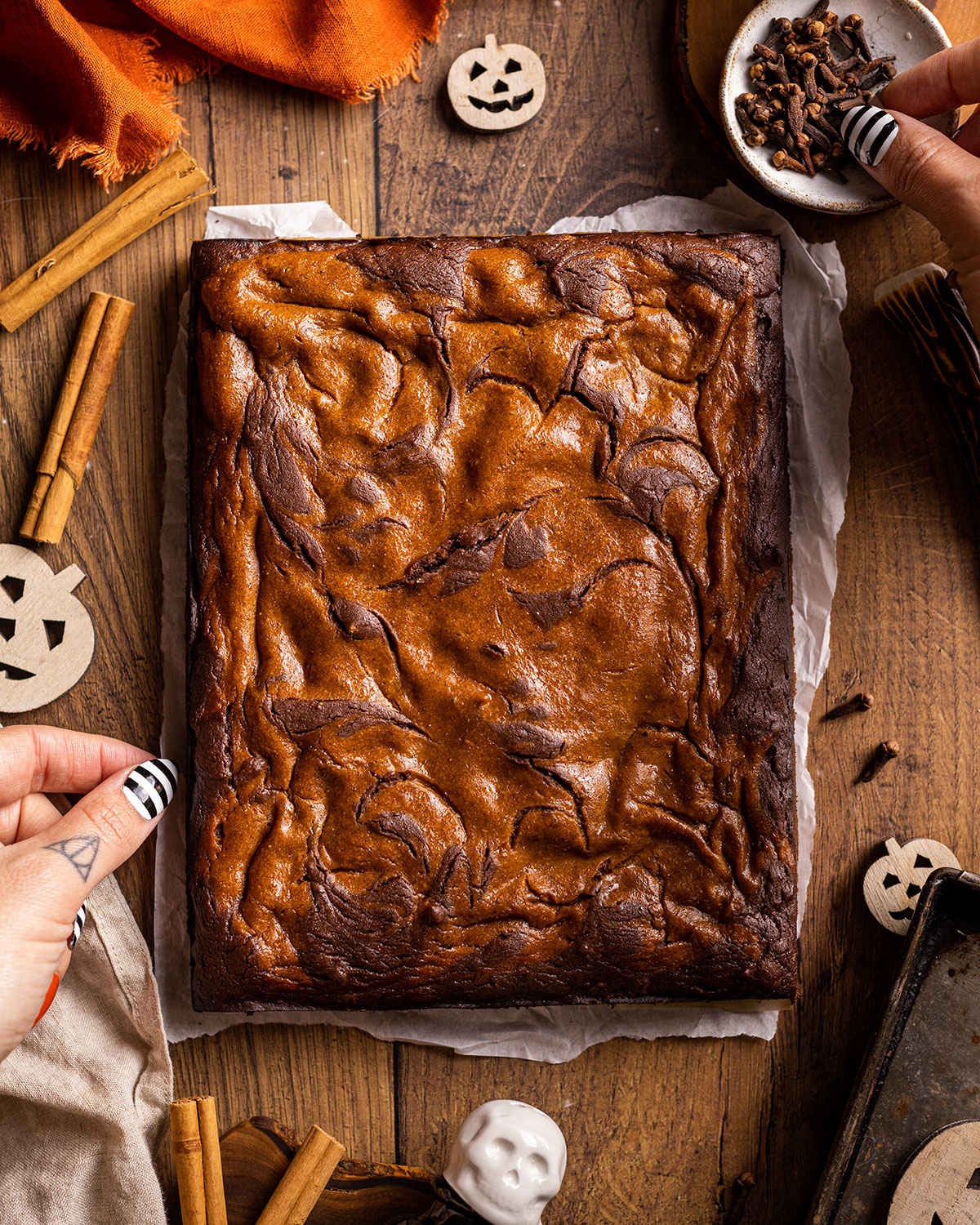 How to make vegan pumpkin brownies

For this recipe, let’s start with preheating the oven to 180°C. Also, lime a rectangular brownie tin with nonstick baking parchment. The brownie tin should be roughly 7” x 9″ (18 x 23 cm) in size.

For all of my baking, I have found that the textured baking parchment from Lakeland is the best option to ensure non-sticky bakes. So I can only recommend this one!

We’re gonna need one mixing bowl to mix our brownie better. To avoid any lumps in the brownie batter, it is best to sift the flour baking powder cacao powder salt and cinnamon into the bowl. Stir in the caster sugar and muscovado sugar until well combined. At this point you can set the ball aside for later use.

In a measuring jug combine the plant milk with the apple cider vinegar. Give it a brief stir, and then set the jug aside so that the milk can curdle. This takes about 10 minutes, but you can also leave it aside for a little bit longer than that.

In the meantime, we can prepare the pumpkin cheesecake mixture, which will go onto our brownies later on. To prepare this cheesecake mixture, place the vegan yoghurt, pumpkin purée, maple syrup, cinnamon, ginger, nutmeg, and cloths into a second mixing bowl. Use an electric hand whisk to blend the mixture into a smooth cheesecake batter.

Afterwards, let’s get our brownie batter ready! Pour your melted dark chocolate into the dry ingredients for the brownie batter, followed by the curdled milk mixture. Combined everything using a spatula, but ensure not to overmix. Once combined, make sure there are no lumps in the brownie batter. 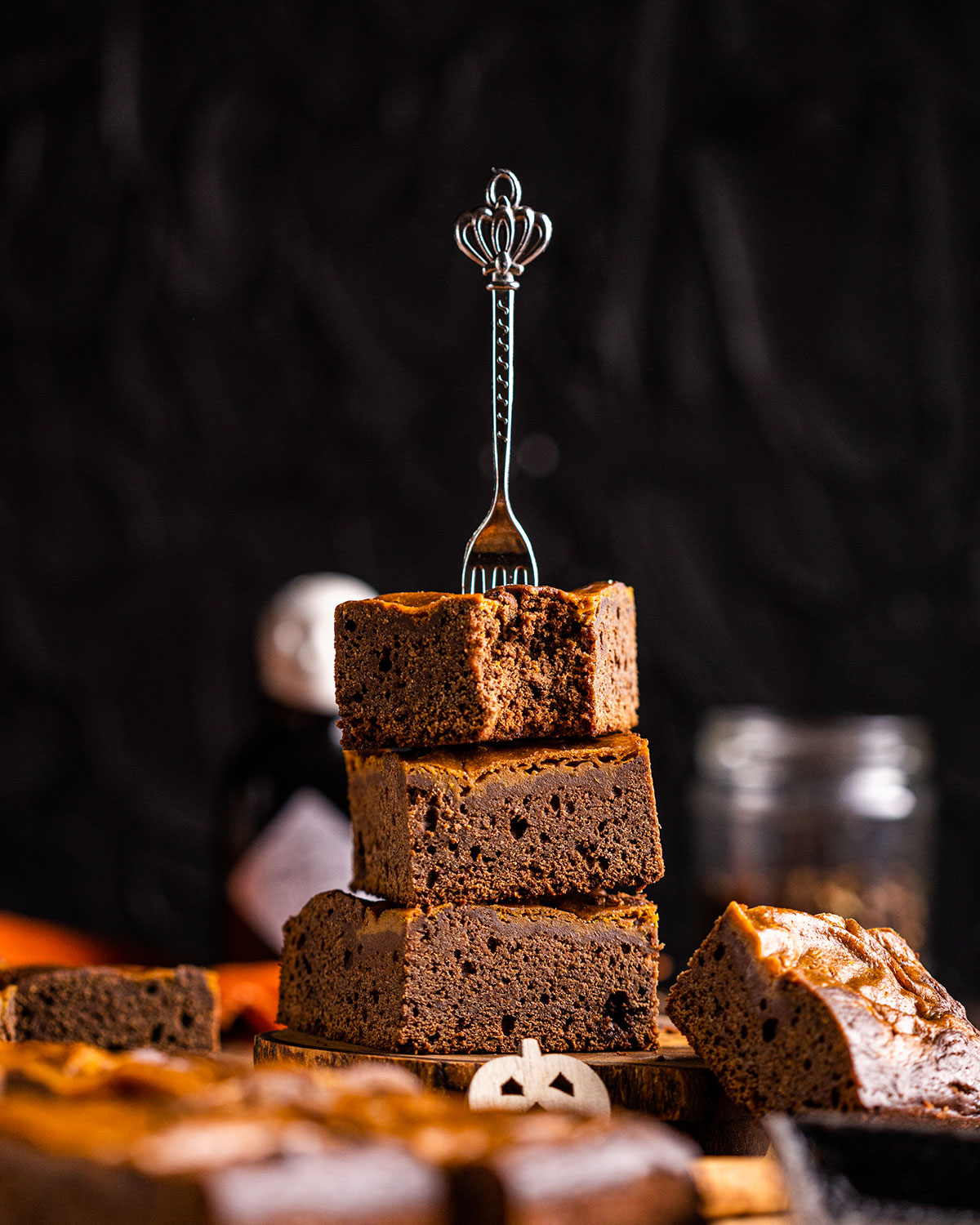 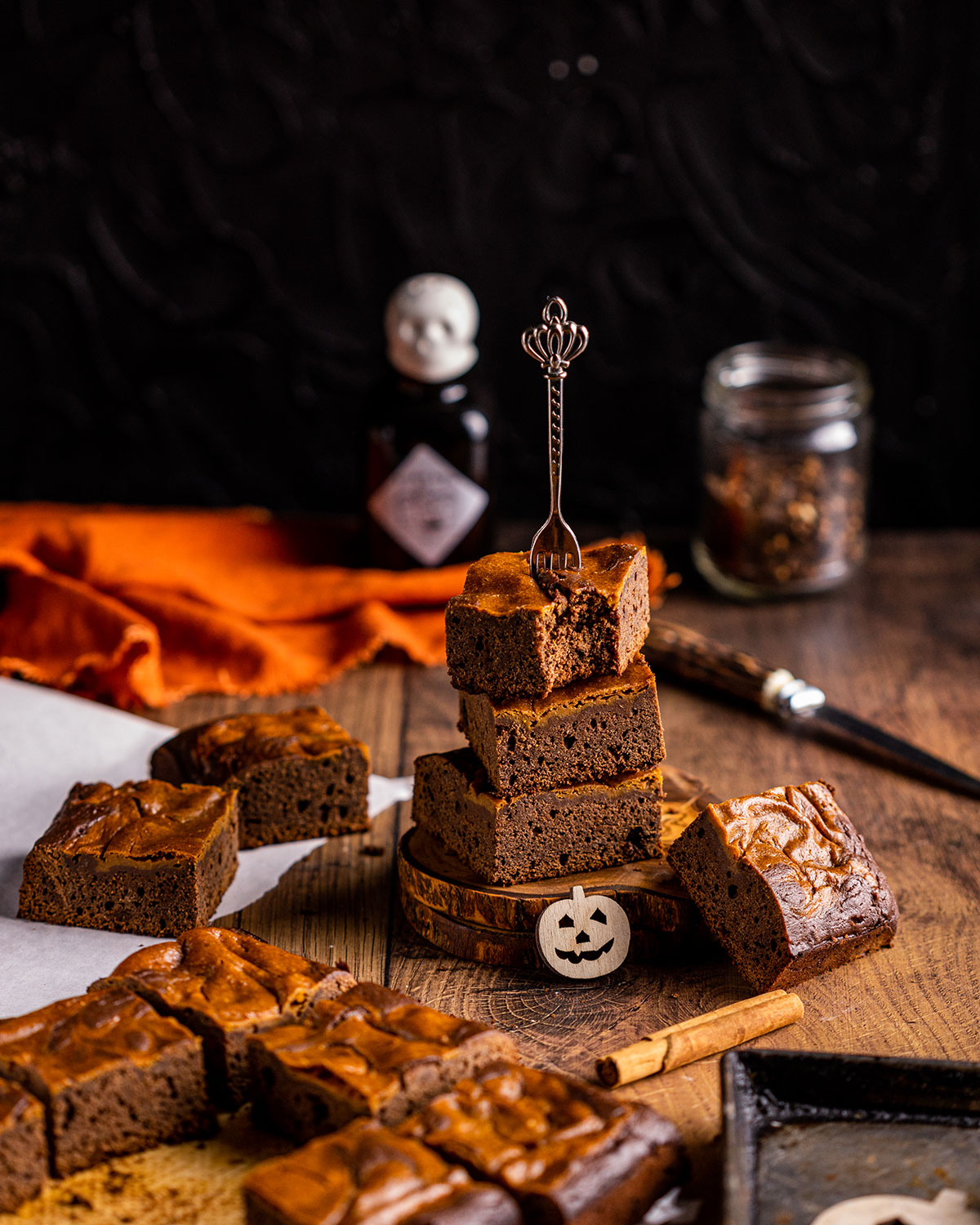 Transfer the brownie batter into the lined oven tray and use a spatula to spread it into all corners. Using a spoon add dollops of the cheesecake mixture on top of the brownie. Use a toothpick to create some swirls on top of your brownie. You can create patterns here if you fancy!

Transfer the brownie tray to the oven, and bake at 180°C for 40 to 45 minutes, or until the top of your brownies is glossy.

Carefully remove the tray from the oven, and allow for your brownies to cool down for at least 20 minutes before slicing.

You can enjoy these brownies on their own, or alongside vegan cream or ice cream (both very delicious options!). 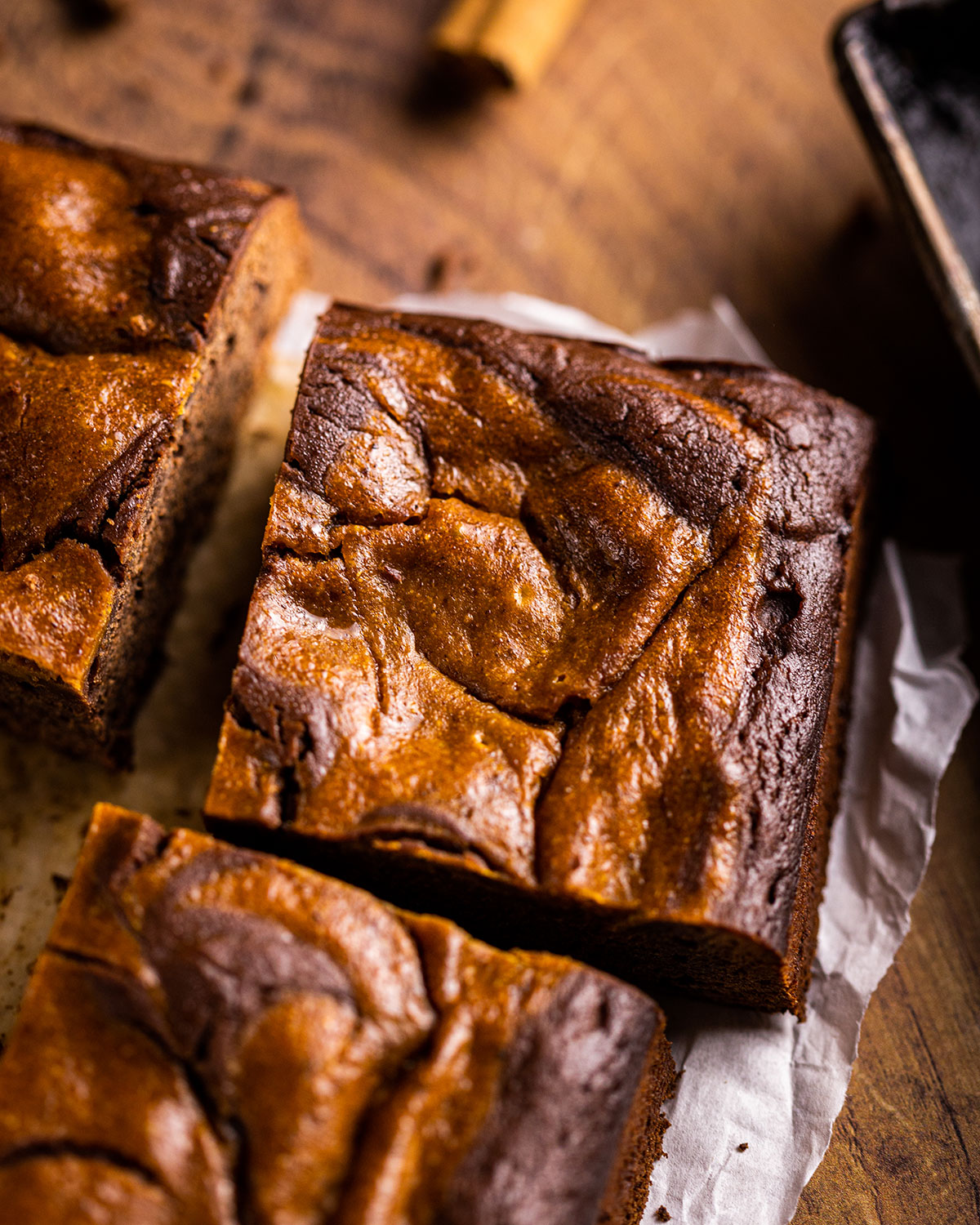 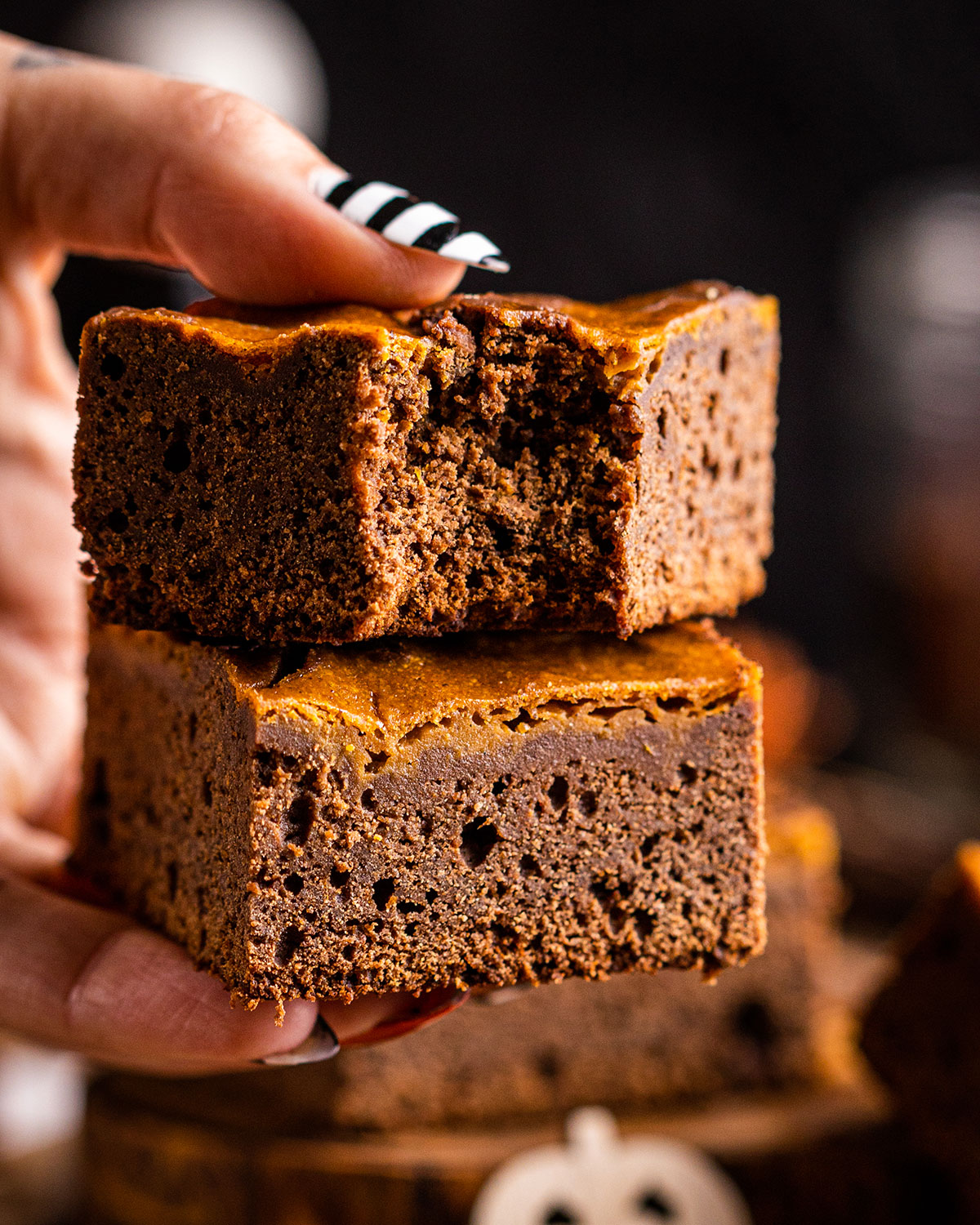 How to store these brownies

To keep these brownies fresh and delicious you can best store them in an airtight container in the fridge for up to 5 days. Alternatively, you can also freeze individual slices of the brownie and enjoy them for up to 6 months.

Where to buy a pumpkin purée in the UK

Pumpkin purée has become more accessible in the UK over the last couple of years. I usually get my pumpkin purée from the world foods section in Tesco. They usually stock it on the American product shelf and it comes in a tin of about 400 g. After opening, you can store it in the fridge for up to 5 days or simply freeze it in portions sizes.

From what I have heard, pumpkin purée is also available in Sainsbury’s and other supermarkets in the UK. If you don’t have access to any of these supermarkets, you can alternatively use Amazon.

As an alternative, of course, you could always make your own pumpkin purée. Here is a recipe from my blog for this. 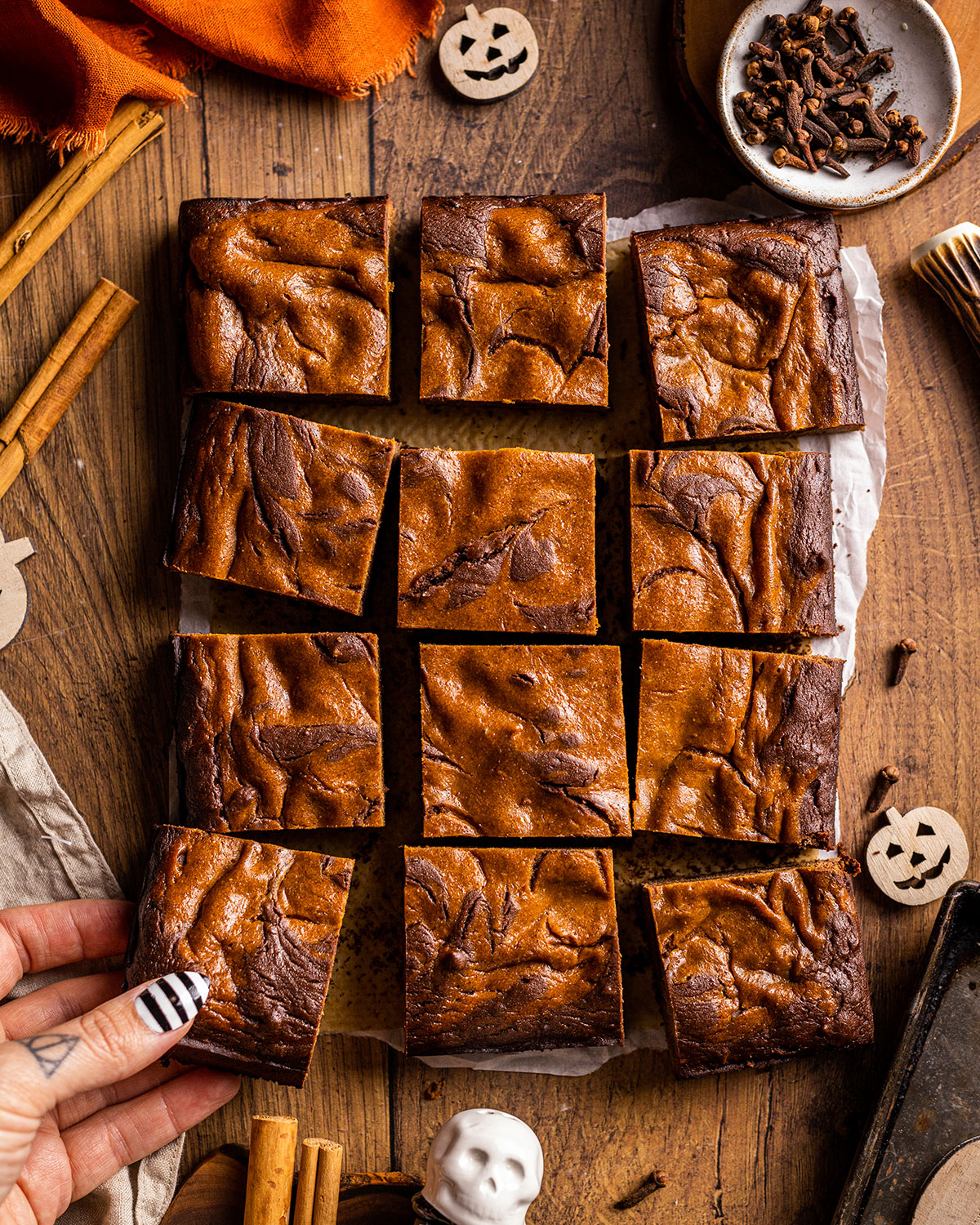 Vegan pumpkin brownies – brownies with a little bit of seasonal spice! These brownies are a great addition to your seasonal baking repertoire. Created with melted vegan chocolate, and topped with a spiced pumpkin cheesecake mixture, that cuts wonderfully through the dark chocolate flavour of the brownies. Perfect for Halloween, autumn, or any other time of the year, really.

For the pumpkin mix:

If you love pumpkin flavour, stir a spoonful of the pumpkin mix into the brownie mixture, before pouring it into your brownie tin.

Store these brownies in the fridge for up to 5 days.

If you love seasonal recipes using pumpkin, definitely give this ago: 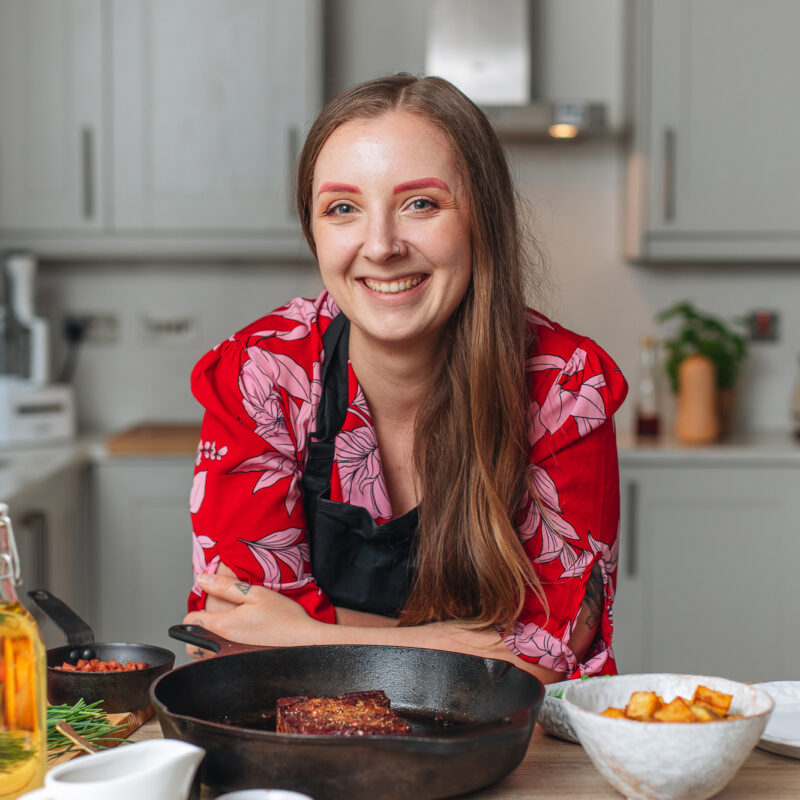 Welcome to my vegan recipe blog! I've been sharing my vegan recipes on Romylondonuk since 2016, having found my passion for cooking after I switched to a vegan diet in 2014.

After living in London for a number of years and just recently moved into the Surrey countryside to be closer to nature. I love sharing indulgent vegan comfort food recipes from my kitchen - often with a healthy twist, but never compromising in taste.

I'm neurodiverse and apart from spending time in the kitchen experimenting on new recipes, I'm obsessed with everything Harry Potter, true crime documentaries, audio books, Netflix series, and feeding birds and squirrels in our garden.

I hope you find some delicious inspiration here!