Create this deliciously fluffy Vegan Easter Plait with this easy to follow recipe – using Aquafaba to create a soft and more-ish texture! 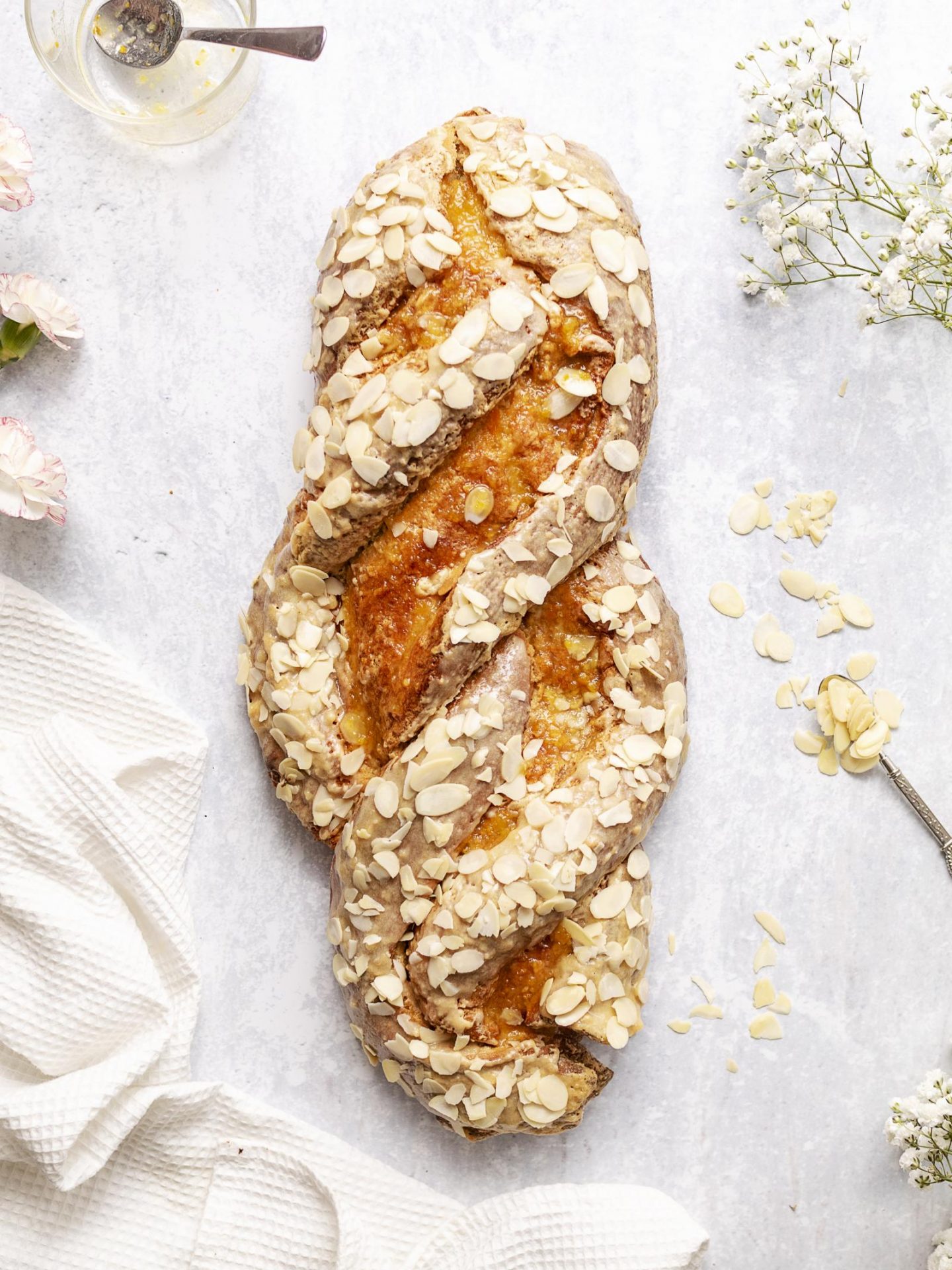 My first ever recipe for a Vegan Easter Plait! And wow – I’m actually so happy with how it turned out! Like with everything, I don’t have too many expectations of getting a great result when trying something for the very first time. Instead, I consider it to be part of the learning process to gain knowledge and experience with new techniques and recipes.

But what a lucky surprise in this case! And it’s not actually just my first ever Vegan Easter Plait – but also the first-ever plait I’ve created.

Filled with marzipan cream, toasted almonds, and brushed with marmalade, this vegan easter plait has turned out perfectly fluffy and soft on the inside with a deliciously sweet crunch on the outside. If you’ve ever tried an Easter plait – or also a wreath – you might know of its distinctive soft texture and how perfectly fluffy it pulls apart. Creating this kind of texture in a vegan version is, of course, a little trickier than the non-vegan equivalent (which is containing a lot of eggs!).

What you’ll need for this Vegan Easter Plait Recipe:

For the marzipan filling:

How to make Vegan Easter Plait

In this vegan version, I have used Aquafaba to replace the eggs. And even if you’ve never used Aquafaba before, let me give you a quick rundown of how to create it yourself in mere minutes.

How to use Aquafaba:

For this recipe, you will need the Aquafaba created from 1 tin of chickpeas.

As you will see from the recipe steps below, the dough needs to proof for an hour in the preparation process. This proving time is very important to create a fluffy texture and to ensure the plait grows in the oven. Ensure that you don’t overproof the plait either – otherwise, it can become hard in the baking process. So, as you might be able to tell – hitting the right proofing time is key!

To proof the dough I usually place it in a greased bowl on my stove (with the stove off!) – coconut oil is great on this occasion – as my kitchen is pretty warm at all times. Ideally, you should cover up the bowl, I’d recommend using a clean damp kitchen towel to cover and let the dough do its thing underneath. It’s also the perfect time for you to create the marzipan filling. This is pretty straight forward: crumble your marzipan into a bowl, add the juice of 1 lemon and about 5 Tbsp of the Aquafaba and gently whisk it up until you have a smooth Marzipan paste. You can alternatively use a small blender or food processor to help you with this process.

To prepare your almonds for the filling, simply toast them in a frying pan without oil until golden (be careful not to burn them!) and set them aside. You can also toast them in the oven until golden, but make sure to keep a close eye on them as they burn very easily.

The tricky part of creating this recipe was the arranging of the plait for me – considering I had never done it before! But I have confidence that you can do it too – after all, I managed on the first attempt!

How to shape the Vegan Easter Plait:

I would recommend rolling out the dough on a lightly floured baking sheet straight on the baking tray as it will be difficult to transfer it to a different surface once it’s rolled, cut, and plaited.

I honestly hope you’ll enjoy creating this recipe for your family and friends this Easter! 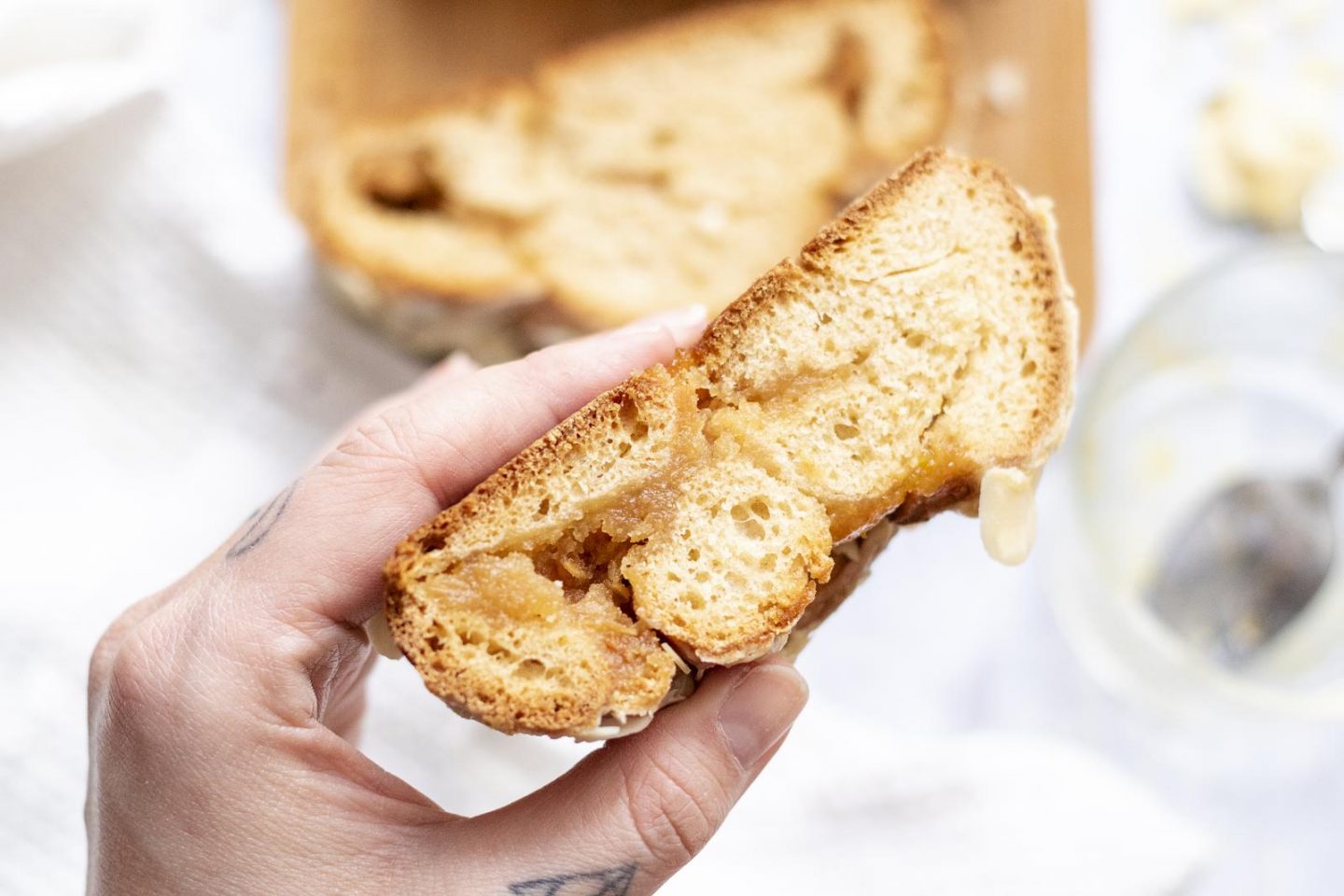 Create this deliciously fluffy Vegan Easter Plait with this easy to follow recipe – using Aquafaba to create a soft and more-ish texture. A twist on the traditional Easter recipe!

For the marzipan filling: 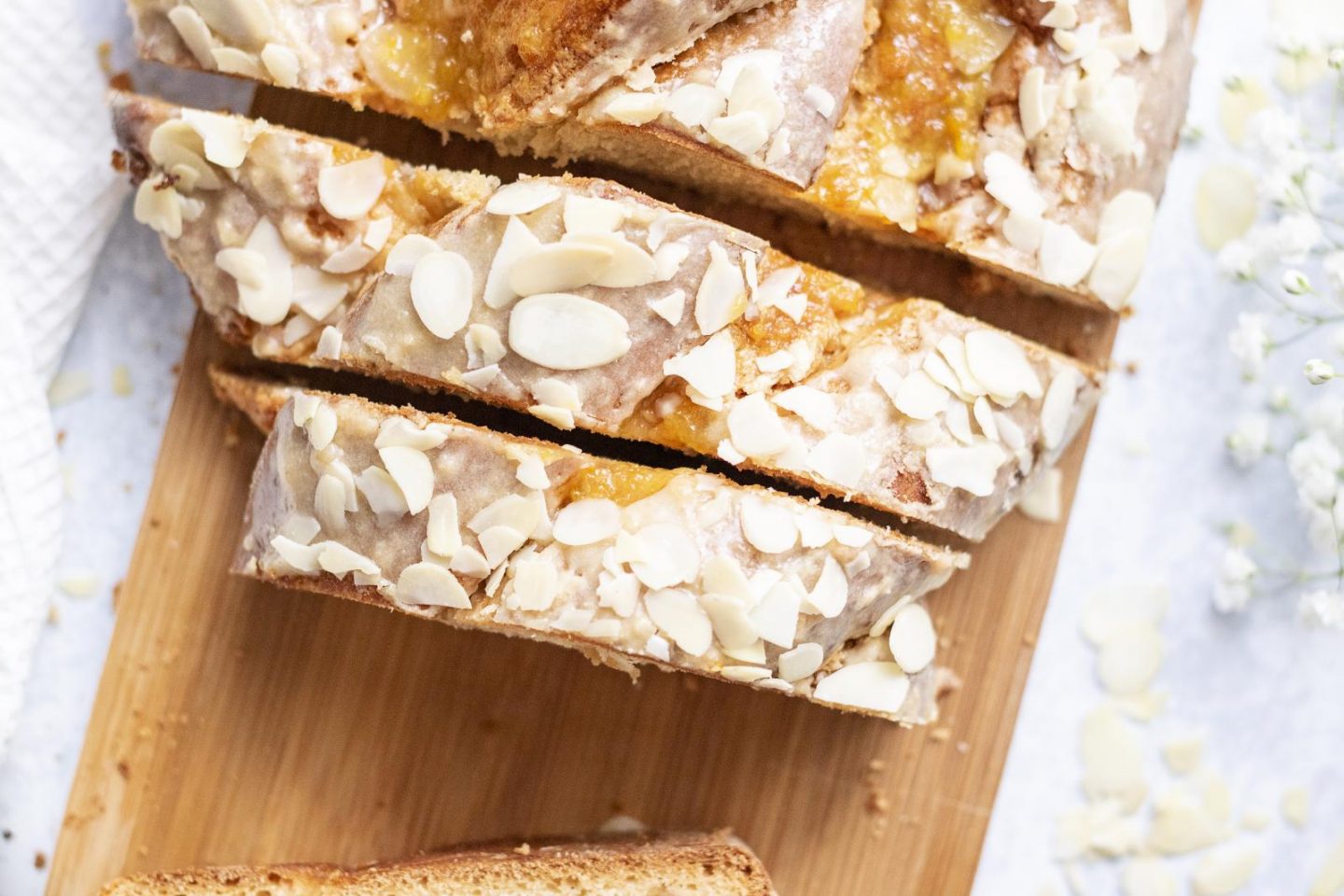 If you love baking, then how about you try giving these recipes a go: