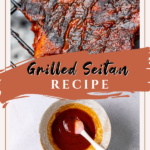 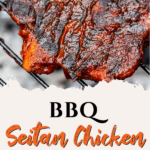 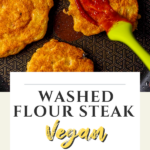 BBQ season is in full force and it's time to share a few of my favorite vegan BBQ recipes with you! This BBQ Grilled Seitan Chicken Recipe is definitely a must-have for your next BBQ party! It's created with a  flour-washed seitan base, pan-seared and coated in a smokey tomato sauce, then grilled to perfection on the charcoal BBQ - simply divine! I love serving this vegan chicken seitan alongside delicious salads and flavorsome sauces, and if you're in a rush, don't you worry: It's just as delicious pan-fried!

Contents hide
1 BBQ Grilled Seitan Chicken
1.1 This recipe is:
1.2 What you'll need to make Grilled Seitan Chicken
1.2.1 Ingredients
1.2.2 Equipment
2 How to make Vegan Seitan Chicken from flour
2.1 What is the WTF method?
2.2 Seasoning and knotting the seitan
2.3 Pan-searing the vegan seitan
2.4 How to make the vegan chicken marinade (BBQ flavored)
3 How to BBQ seitan
3.1 Serving
4 Frequently Asked Questions - Grilled Seitan Chicken
4.1 Can I also make this recipe with vital wheat gluten instead of washing my flour?
4.2 Can I also pan-fry this vegan seitan instead of grilling it?
4.3 Which flour do I best use to wash flour?
4.4 If - like me - you love Pinterest, you can find me here & if you like, you can pin any of the images on this page to your boards 😊
4.5 You might also enjoy these vegan BBQ recipes:
5 BBQ Grilled Seitan 'Chicken' Recipe
5.1 Description
5.2 Ingredients
5.3 Instructions
5.4 Notes
5.5 Did you make this recipe?

How to make Vegan Seitan Chicken from flour

In order to make delicious BBQ Seitan Chicken, there are a few different steps involved - they are all important to create the right texture for the seitan chicken recipe. In this method I'm using the WTF method to make my chicken seitan - WTF stands for 'wash the flour', in case it has you confused 🙂

What is the WTF method?

In the Wash-The-Flour method to make seitan, we're starting with plain high-protein wheat flour. This can come with different names on the packaging - strong white flour, bread flour for example. The best way to make sure you're using the right flour is to check that it's fine flour (not with any big grains or anything similar), that it's pure wheat flour, and has at least 12% protein. Most flours won't have the protein percentage clearly written on the packaging, but simply check the nutritional information of your flour and make sure it's at least 12g protein per 100g.

In the WTF method, we create a simple, firm dough ball from flour and water. Knead it until it is smooth, then allow for it to rest for about 10-15 minutes for the gluten to develop. We then rest the dough ball in a water-filled bowl, fully submerged underwater. It should rest for about 30 minutes. During this time the starches in the flour ball begin to slowly separate from the gluten-protein and the dough ball will become softer.

When the resting time elapses, you need to start kneading the dough underwater in the bowl. Whilst doing so, the starches from the flour will release from the dough ball and dissolve in the surrounding water, which will turn white and thick - almost cream-like. After about 2-3 minutes of firm kneading underwater, drain the water and fill the bowl with fresh water. Repeat the kneading process underwater 2-3 more times until the water doesn't become as thick anymore and remains slightly see-through.

It is normal for the gluten-ball to feel as if it's almost falling apart at this stage - don't you worry, this is normal and it will come back together in the next step. Transfer the gluten into a colander and rinse it under the tap for 10 seconds, then set the colander aside for roughly 30 minutes and allow the seitan to rest. Make sure any excess starch water can drain out of the colander.

During this last resting time, the gluten-strands will reconnect and come back together into a firmer seitan dough. The timings in this WTF method to making seitan vary depending on the type of seitan and recipe you are preparing - some methods even require for the seitan to rest overnight - but the above-mentioned times are the ones suitable for this particular recipe. It's quite a quick one compared to some seitan-making methods!

Seasoning and knotting the seitan

Next up, we're seasoning the gluten dough. As chicken itself is rather flavor-neutral, I usually just add salt and pepper and sometimes a little vegan-friendly poultry-seasoning to the gluten at this point. On this occasion, I'm working with smoked paprika however as it's also part of the sauce later on, so this works really well. Washed flour seitan is generally seasoned with dry spices and herbs and to incorporate them, I like to add the dough hook to my Magimix and pulse the seitan dough and spices in there to incorporate them evenly. Afterwards, I usually let them rest for 10-15 minutes, simply for the strands to come back together properly.

Alternatively, you can also incorporate the spices by hand by simply sprinkling the seitan dough in the seasoning and kneading it until evenly incorporated - in this case, you don't need to rest it again.

You probably know that flaky, shredded chicken texture really well and in order to replicate this, we're stretching and knotting the seitan dough in the next step. In order to do so, simply knead the seasoned seitan dough and then gently stretch it into a log until it's long enough for you to knot it. Repeat about 5-6 times or until the seitan dough is firmly knotted together. Set the seitan aside whilst you're heating your pan for the next step.

To get the wonderfully crispy skin onto this vegan chicken recipe, we're pan-searing the seitan in this step. Simply heat a little oil (roughly 1-2 tbsp) in a large non-stick frying pan, then cut or pull the knotted seitan apart into 2-3 fillets. Press them to flatten between your hands and then place them into the hot pan.

Sear on both sides for 2-3 minutes, gently pressing the fillets into the hot pan, until you get a golden, lightly crispy skin on the seitan - then remove them from the heat.

How to make the vegan chicken marinade (BBQ flavored)

Whilst the seitan is pan-searing, simply whip up the sauce by combining tomato paste, tamari soy sauce, maple syrup, olive oil, smoked paprika, fine salt and black pepper in a small bowl. Brush the pan-seared seitan in the sauce before placing it onto the BBQ.

How to BBQ seitan

To grill this seitan BBQ chicken, first, make sure that your charcoal BBQ is hot and ready. It should be at 150C-170C for the perfect temperature.

Place the sauce-coated straight onto the grid over the hot coals and grill them on each side for roughly 4-5 minutes or until golden and lightly crispy.

Sign up for the newsletter for more exclusive vegan BBQ recipes and a copy of my free tofu ebook 'tofu all the way'.

Can I also make this recipe with vital wheat gluten instead of washing my flour?

Yes/No - this is not a straightforward answer. In order to get a similar texture, you would need to make this vegan seitan from flour washing, however, it is generally possible to make something similar with vital wheat gluten (= wheat gluten flour, short also named VWG). Personally, I haven't tried this option with vital wheat gluten, but in theory, you would need to add some starch into the vital wheat gluten (VWG), for example, chickpea flour, then add your spices (salt, pepper, smoked paprika) already and add water until you can create a firm dough ball. Skip the flour washing and resting stages and go straight to knotting and then pan-searing it. Again, I haven't tried this yet myself, but this should in theory work, so feel free to experiment!

Can I also pan-fry this vegan seitan instead of grilling it?

Absolutely, this seitan is great pan-fried! However, I personally prefer the smoky flavors of a charcoal BBQ and it works so great with the smoked paprika.

Which flour do I best use to wash flour?

In order for the flour to wash properly, I recommend using a strong flour that is high in protein, more than 12% protein. Most flour brands don't show the percentage on the packaging, but simply check the nutritional information and make sure that there is at least 12g protein per 100g flour.

It's also important to mention that the flour needs to be fine - everything with whole grains inside is not useful for making seitan.

If you enjoy this Seitan recipe - or cooking with Seitan in general - you will definitely enjoy my Seitan Kebab recipe and Vegan Steak!

Deliciously succulent grilled vegan seitan chicken - perfect for your next vegan BBQ party, best grilled on a charcoal BBQ, and also great pan-fried for when it has to be quick. Wonderful texture creating with the seitan flour washing method (WTF = Wash the flour). #seitan #veganbbq #bbq #bbqrecipes #seitanrecipes

For this recipe to work out, it's vital that you use high-protein, fine wheat flour. I recommend aiming for a minimum of 12% protein in your flour and I personally use a strong white bread flour by a brand called 'Allisons'.

You can also pan-fry these seitan fillets instead of BBQ'ing them. Simply heat a little oil in the pan beforehand, brush the fillets in the sauce and pan-fry for a few minutes on each side, until golden.

Looking for more vegan recipes for your next BBQ party? Look no further, here are a few of my favourite go-to's:

*Disclosure: This page may contain affiliate and sponsored links that earn me a small commission, at no additional cost to you. You can find more information in my Privacy Policy.