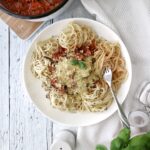 Vegan Bolognese Sauce Recipe (with vegan mince) – This classic Italian dish is just the perfect amount of ‘Meaty’ and delicious, made with store-bought vegan mince and a delicious homemade tomato sauce. 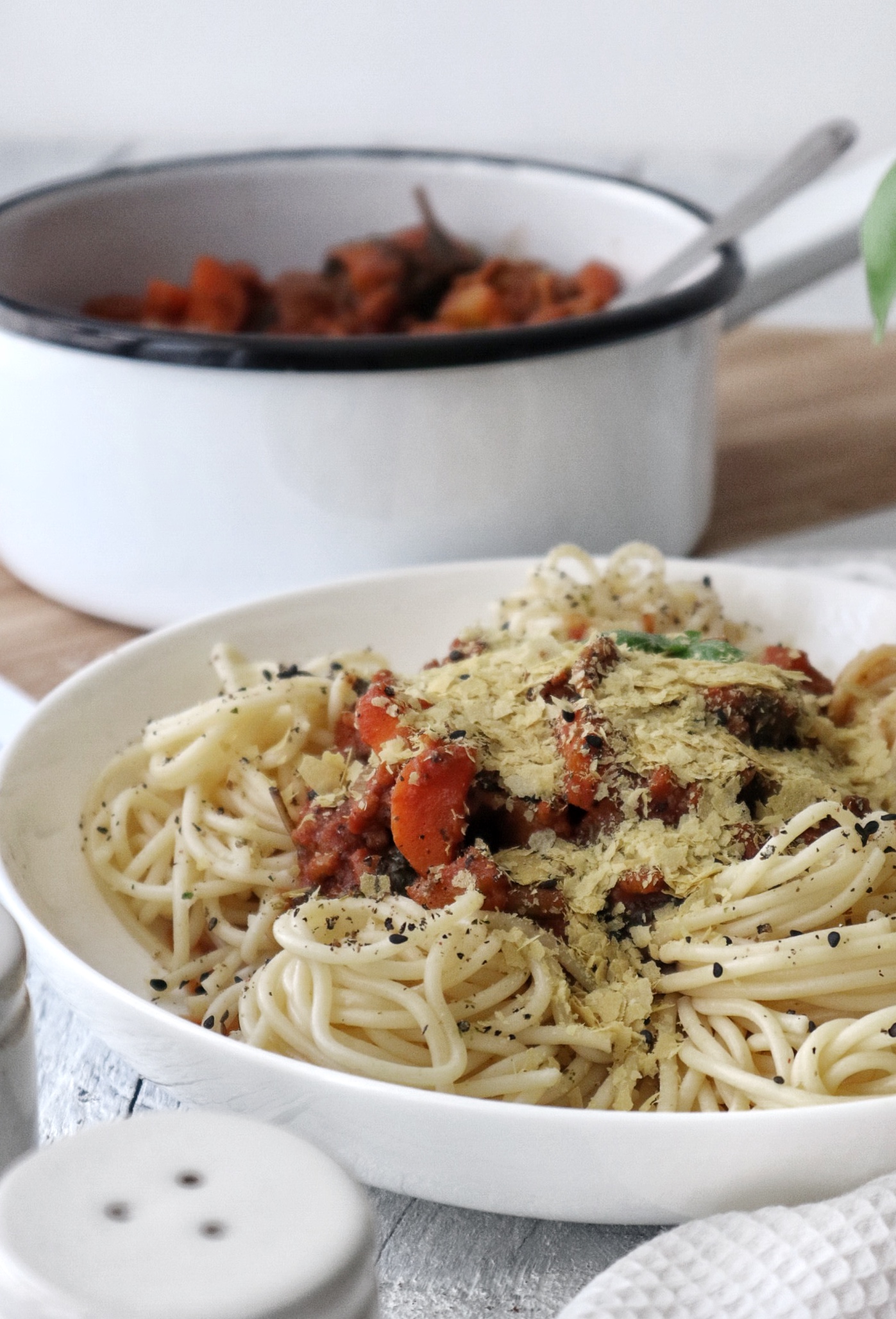 Buenos dias! Well, technically I should start this blog post with ‘Buon giorno’ – as the title tells you already, we’re talking all about authentic Italian cuisine here, but well… my head wants what it wants, and today that was saying ‘Buenos dias’ (Yes, my head is a funny place, you should visit sometime! 😉) If you’re following my Instagram account, you may have already seen my recent post with this classic dish! If I had to name the most typical dish I’ve had in my life, it’s probably this one: Meaty Vegan Bolognese Sauce Recipe (with vegan mince)!

Both my parents have a love for Italian food, so Bolognese was a regular part of our shared weekend lunches and dinners – however not a vegan one, as back then even I wasn’t living the plant-based life.

Throughout my years of being vegan I’ve made countless attempts at recreating the perfect vegan Bolognese, but ladies and gentlemen – I have to admit, up until now I’ve simply not been able to nail the distinct taste of Mum’s traditional Bolognese in a vegan version.

And that’s the point, cause I am 100% certain I’ve finally gotten there! 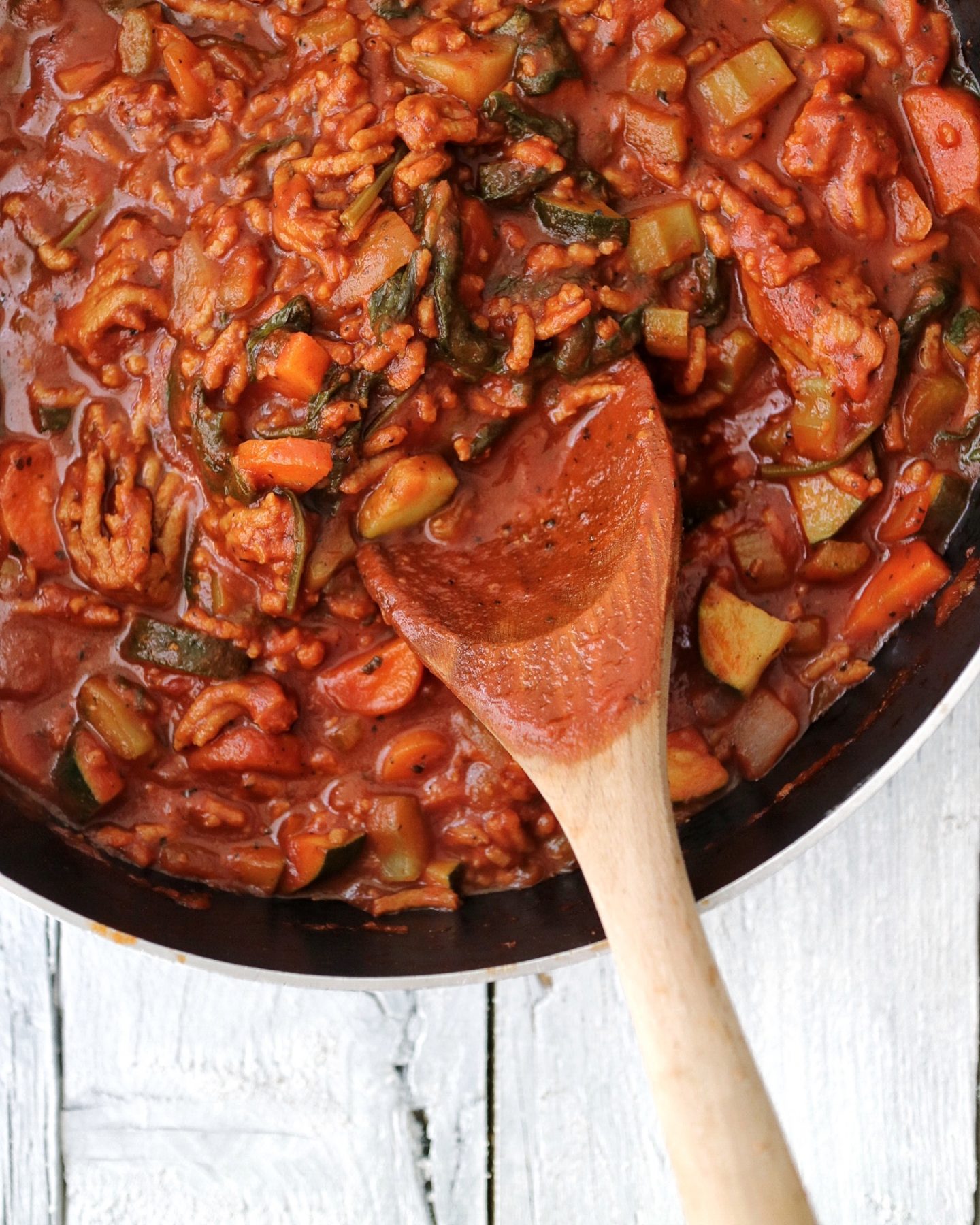 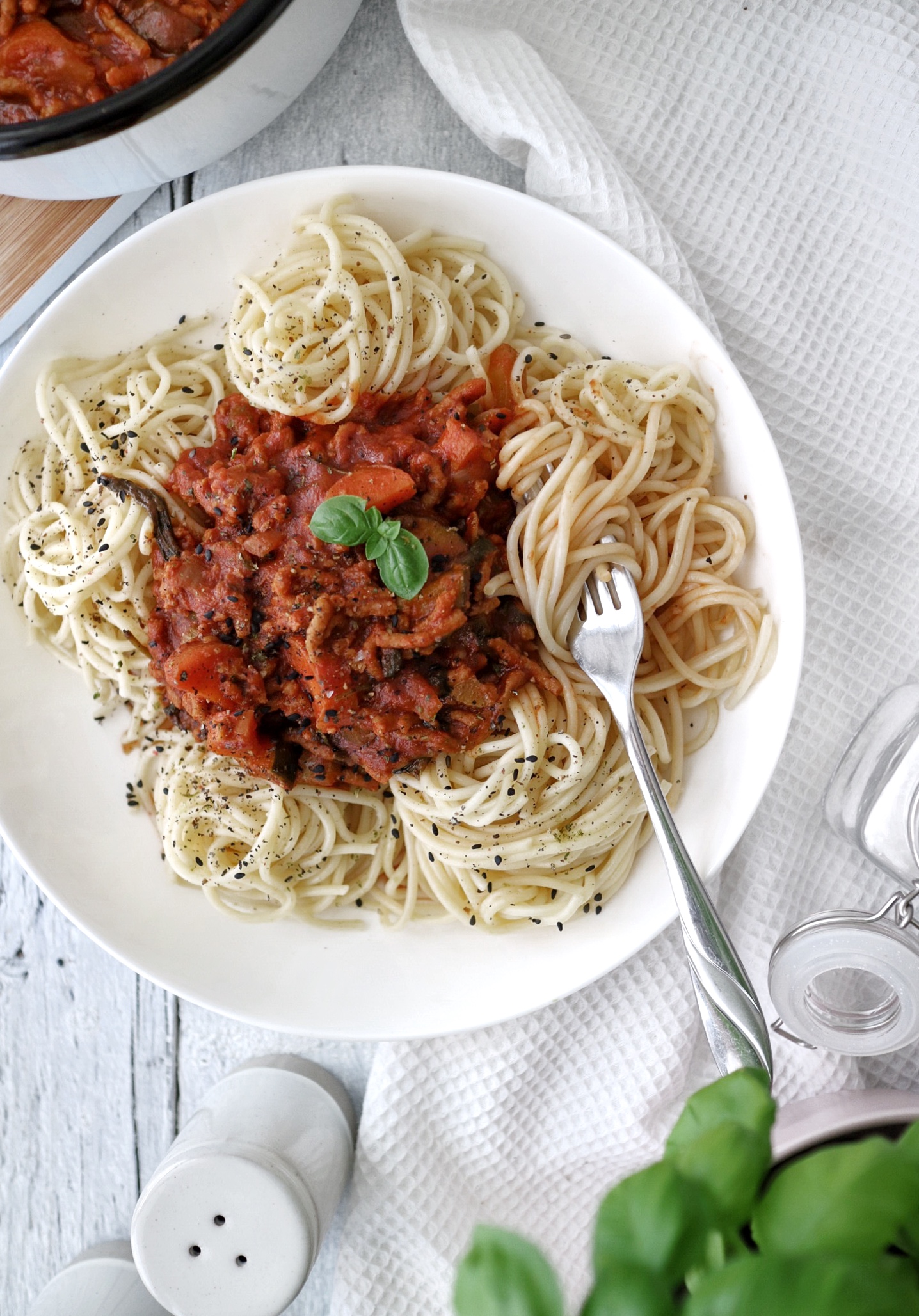 In a typical non-vegan family, Mum’s Bolognese was made to Italian tradition: with beef. For my vegan version I therefore always knew: lentils & co make a delicious Bolognese, but it’s simply not the traditional flavour and texture that I long for when I crave a good old Spag-Bol.

Earlier this year, the perfect replacement finally launched in the UK: Naturli Mince! You may have already seen in one of my previous blog posts (when I made a bangin’ Vegan Bic Mac). It’s made from soy protein and does not only look like mince (creepy, right?) but also holds a great texture and flavour when used in this Vegan Spaghetti Bolognese recipe.

It’s launched in the Sainsbury’s meat aisle earlier this summer – but not all Sainsbury’s might have it stocked. My own Sainsbury’s local doesn’t have it for example – and I myself have to travel a little further (to Chiswick to be precise) to get my hands on the mince and the burger. But oh well, that’s what I did, when I craved a good Bolognese, so you must know that this craving was truly an emergency, and funnily it actually came on a Sunday morning and this Vegan Spaghetti Bolognese was a late breakfast, ha!

If you don’t have access to a Sainsbury’s that stocks this vegan goodness, you can also substitute with your favourite vegan mince. I also like the own-brand vegan mince that Asda offers, so maybe that could be an alternative option for you. 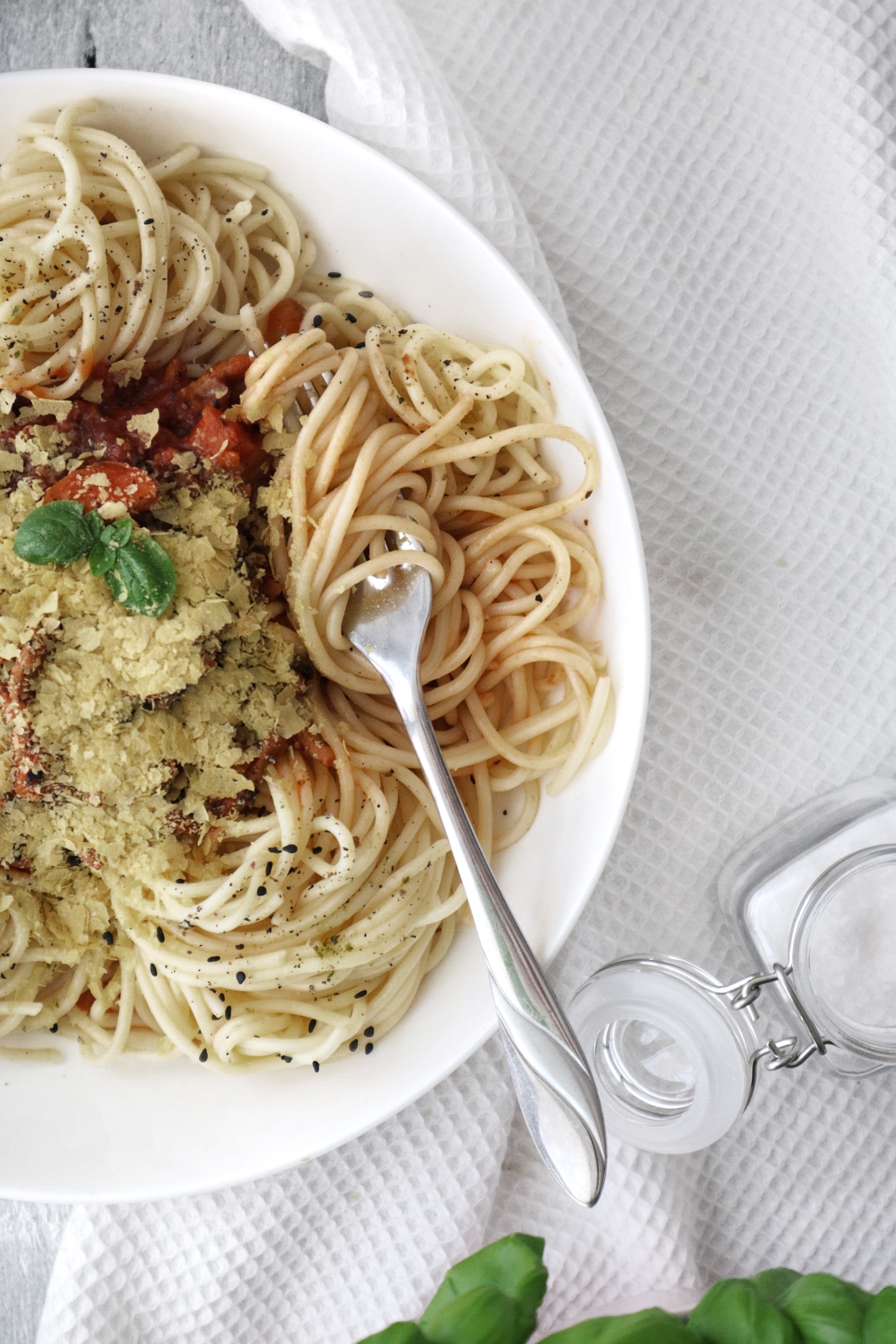 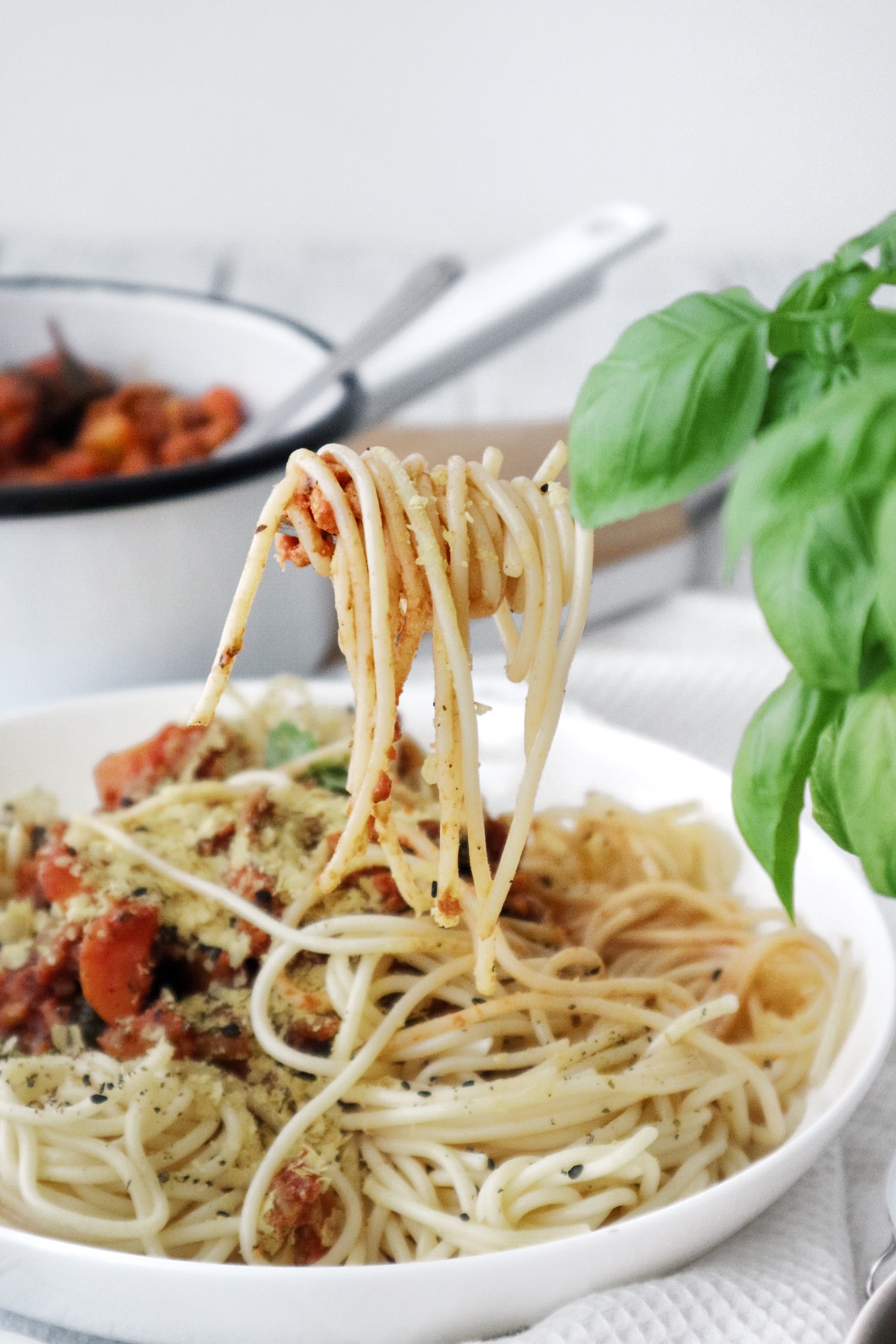 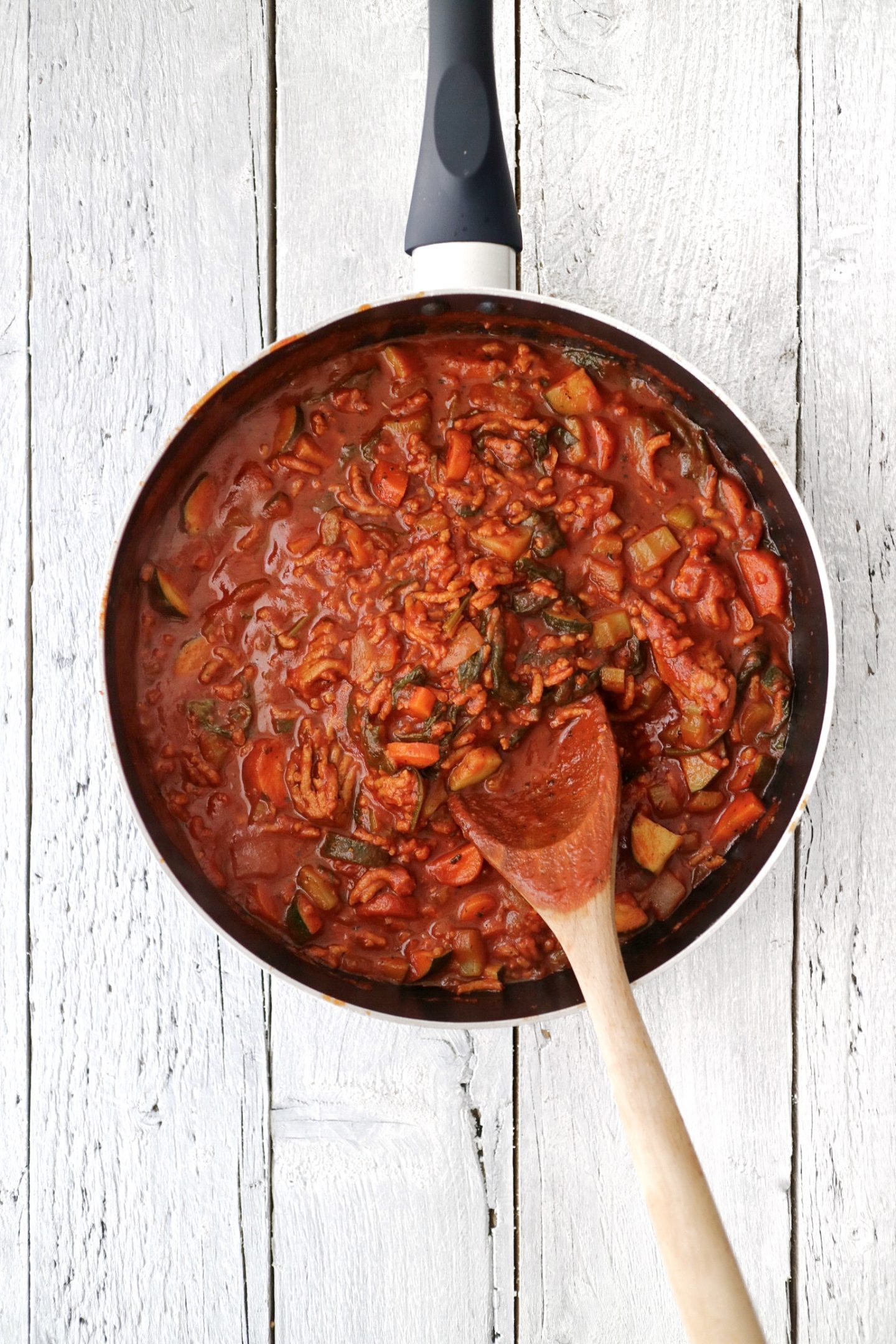 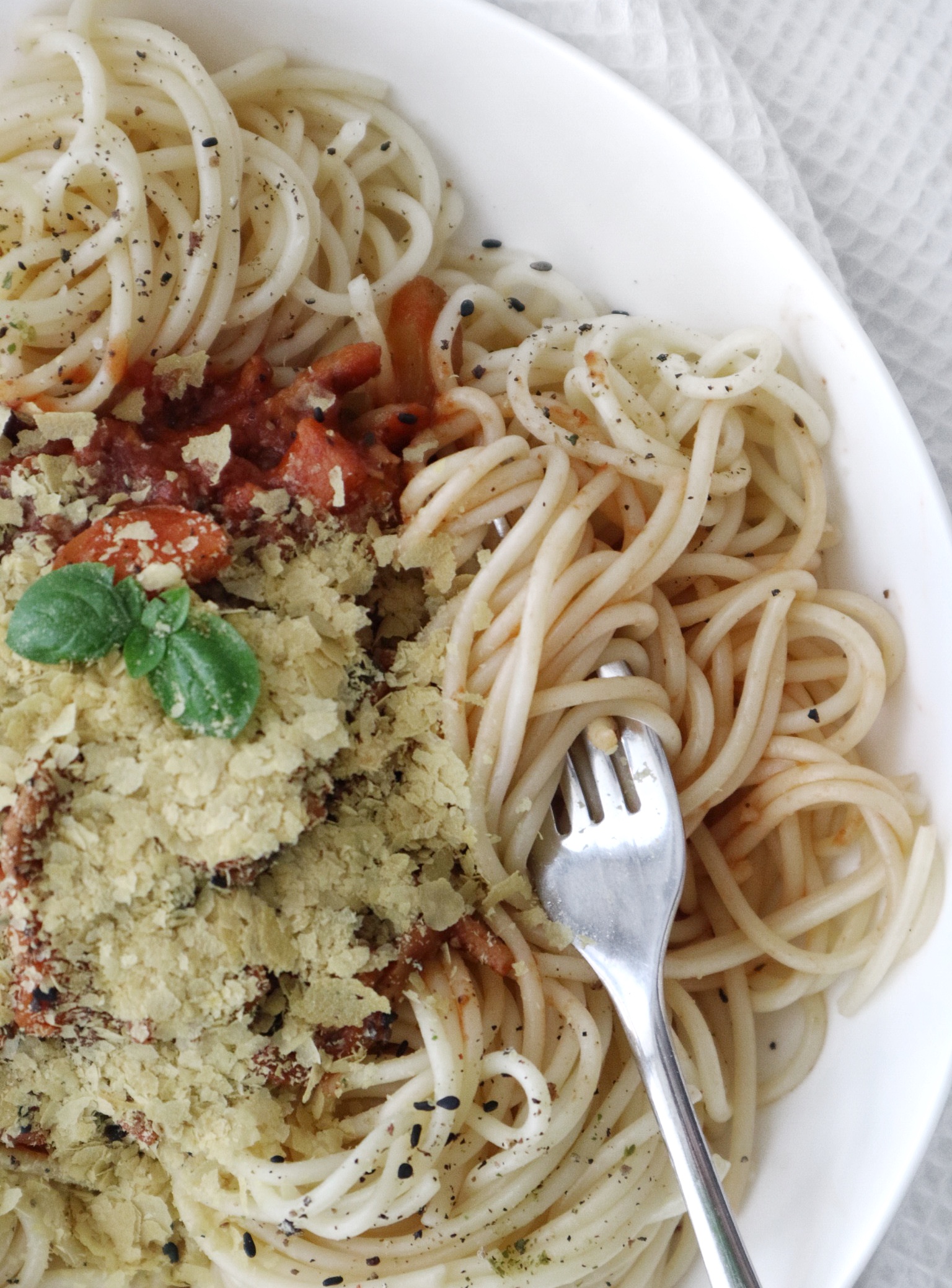 To start with, chop up your carrots, courgette, onion and celery into bitesize chunks. Of course, if you don’t want anything to be chunky, like onions, then you can chop them more finely – however you prefer.

Next, get a pot of water boiling and start cooking the spaghetti according to the packet instructions and you can get started on the pasta sauce while you’re waiting.

How to make vegan Bolognese sauce

To make a start with the sauce, you’ll want to add your olive oil to a large pan along with the onion and cook on medium heat. Cook the onion until it starts to go translucent, then throw your other chopped veg and fry it all together for about 5 minutes.

Next, add your pack of Naturli Mince and break it up with a spoon. Fry the mince for about 5 minutes, with the other ingredients, and stir regularly to ensure it doesn’t burn. After that, turn the heat down and add your spices.

For the next step, pour in your passata and give it a good stir. If the mince comes out dry, add a little water to the mix before adding your lemon zest and sweetener to the pan and continue to mix it all together.

Now that the base of your Bolognese sauce is ready, leave it to cook—with the lid on—for 20 minutes, stirring occasionally. While you’re waiting, your spaghetti should be cooked.

Assemble your pasta and sauce onto a plate or into a bowl and voila! I love to add a splash of olive oil and a lot of nutritional yeast for a finishing touch, but that’s all up to you!

Extra Tip: The Bolognese also freezes very well – simply let it cool down & transfer it to a freezer-safe container. It should be freezing fine for 3-6 months, though I have to admit that it’s never lasted that long in my own freezer 😉 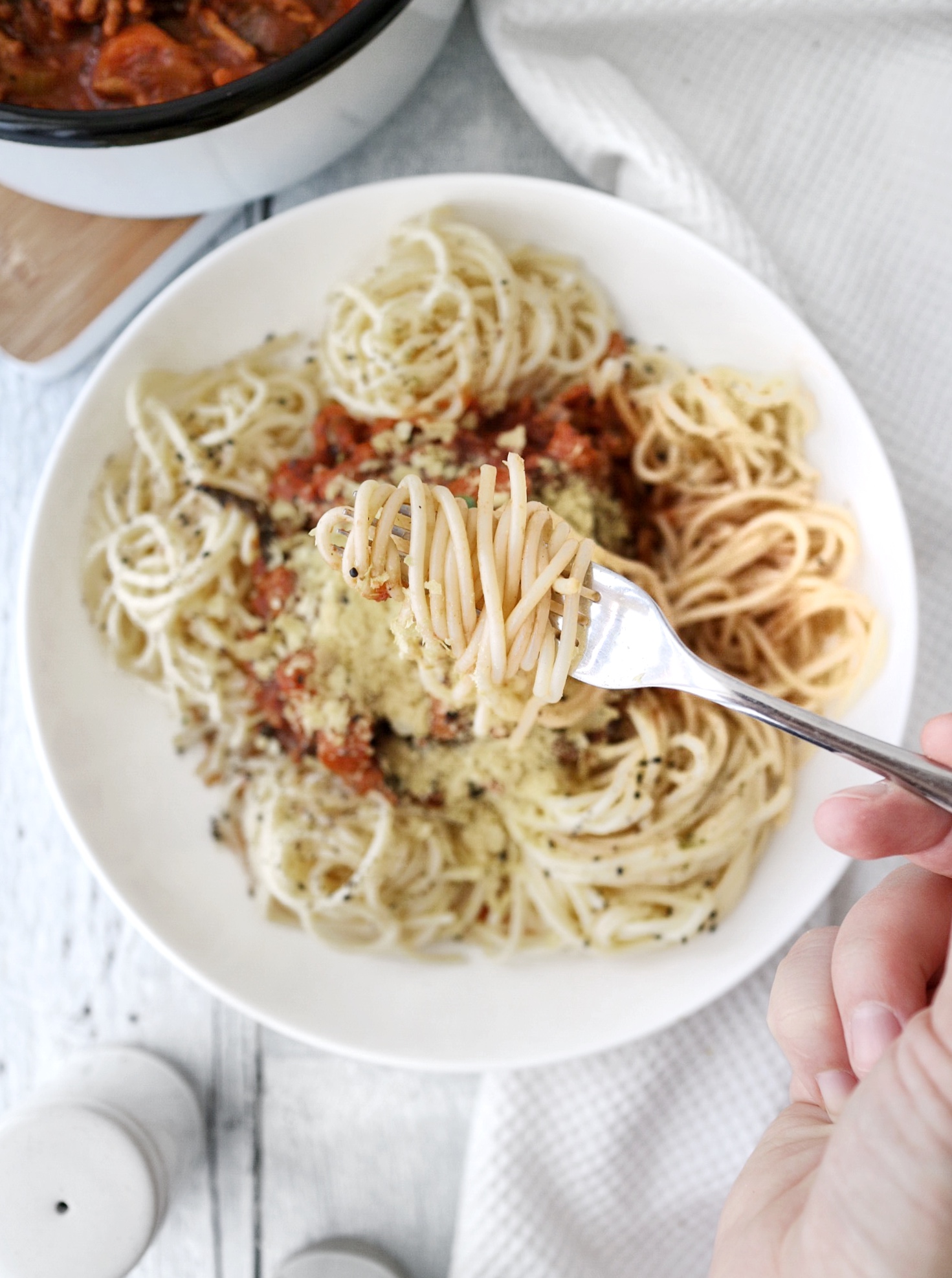 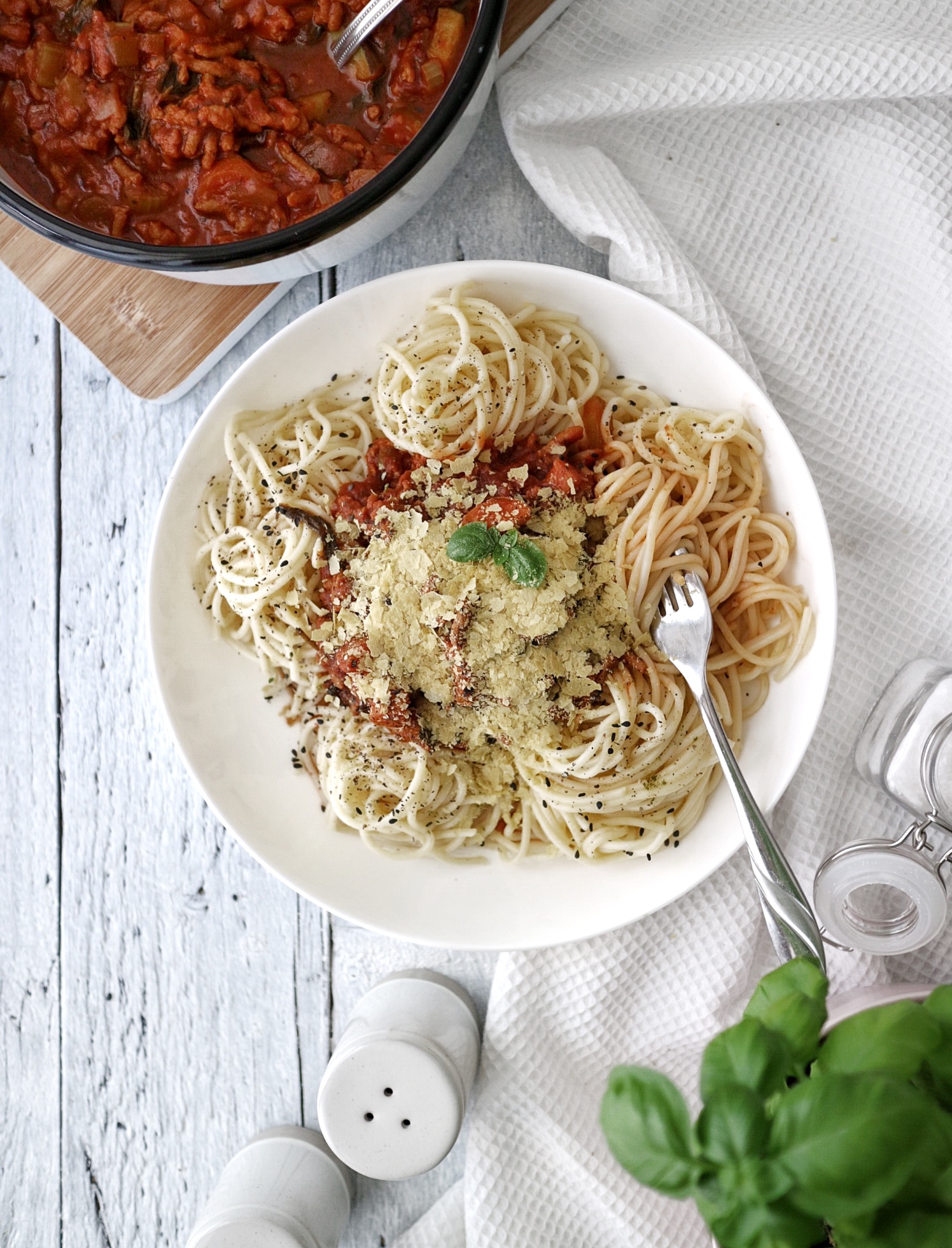 Vegan Bolognese Sauce – This classic Italian dish is just the perfect amount of  ‘Meaty’ and delicious, made with store-bought vegan mince and a flavoursome, homemade tomato sauce.

Interested in seeing some more tasty pasta dishes? Check out some of my favourites below: