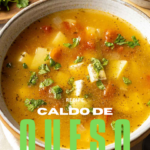 This delicious Mexican-inspired Caldo de Queso is a cheese and potato-based soup made with tomatoes, stock and mild chilies. The traditional recipe originates in the Northern part of Mexico and it's a hearty and tasty soup that can be both served as a main dish or as a starter.

The traditional recipe calls for a cheese originating in Sonora (the Northern part of Mexico) and California chilies, which are both widely available in Northern Mexico, but rare in other parts of the country and the rest of the world. In this version of the Mexican soup, I used a plant-based greek-style cheese from Violife - it has the perfect mix of flavor for the recipe and mostly holds its shape whilst being soft - and poblano chilies, which are a widely used replacement for California chilies in this dish.

What is Caldo de Queso?

Caldo de Queso is a traditional soup dish that originated in the state of Sonora in Mexico, and it is widely known in the Northern part of Mexico. It translates to "Cheese Soup" but can also be called "Caldo de Queso Con Papas" (Cheese Soup with Potatoes). It's a hearty and creamy soup traditionally made with cheese and potatoes, and there are different varieties with a mix of vegetables and chilies.

Which cheese to use for Caldo de Queso?

Traditionally, a cheese from the Sonora area in Mexico is used for this dish. However, this type of cheese is not widely available outside of Northern Mexico.

There are a couple of delicious alternative cheeses that can be used to make this recipe. For this recipe, you would need a soft cheese that lightly melts, but holds its shape when suspended in the warm soup.

In other parts of Mexico, this soup is often made with 'queso fresco' or 'queso panela', which are soft, fresh cheeses that are more widely available.

For best results, do not use a high-fat cheese, as this would completely melt into the soup - and we want to keep some texture here!

The cheese that I have used for this recipe is a vegan greek-style cheese alternative from Violife. I have found that it's the perfect replacement for queso fresco, as it is soft and only melts a little when added to the soup. It adds a tasty creaminess to the soup, but also some texture, which is what we're going for.

Which chilies to use for Caldo de Queso?

Traditionally, this recipe uses California peppers (aka 'Anaheim green chilies"). This variety is widely known in Northern Mexico and Sonora, where this dish originates. However, these chilies are not easy to find in the rest of Mexico and beyond, and this dish is therefore often made with 'chile poblano' instead.

These are more widely available across the whole of Mexico and beyond.

Where to buy Poblano Peppers?

In the US, you can buy Poblano Peppers at Walmart, Mex Grocer, or Instacart.

Alternatively, you can order them on Amazon US.

In the UK, you can buy fresh poblano peppers from a variety of sources, such as Riverford Farm, South Devon Chili Farm, and Desert Cart.

For the tinned variety, you can conveniently order them on Amazon UK.

If you can't get hold of Poblano Peppers or Anaheim Green Chilies, you can use any type of green pepper. A good replacement is Italian peppers for example.

Ingredients for this recipe

To enjoy a delicious Caldo de queso you need the following ingredients:

How to make this Mexican cheese soup

If you are using tinned Poblano peppers that are already cooked, peeled, and deseeded, then slice them into thin strips and skip ahead to step 2.

If you are using fresh Poblano peppers (or other fresh peppers as a replacement), drizzle them with a little oil and roast them in the oven, over an open flame, or in the air fryer until lightly blackened. Carefully remove the skin and seeds, cut them into strips, and set the peppers aside.

Step 2: Base for the soup & simmering

Heat the oil in the large saucepan over medium heat, then add the onion and salt. Cook for 4-5 minutes or until softened. Add the grated garlic and stir for a minute, then add the chopped tomato, vegetable stock, and potatoes.

Cover with a lid and cook for roughly 20 minutes on low heat, or until the potatoes are tender.

Stir in the cream cheese, then add the roasted chilies and oregano. Cook for 5 more minutes, then remove from the heat and season to taste with salt and pepper. If the cheese you're about to add is very salty, consider adding less salt and adjust when serving, if needed.

Place the cheese cubes onto the serving plates and cover them in the soup before serving. To garnish, sprinkle with fresh cilantro and serve warm.

You can easily serve this cheese soup on its own, or with a side of toasted bread! Another delicious option is warm soft tortilla or soft bread rolls to dip into the soup.

To make this delicious soup ahead of time, allow for it to cool down completely at room temperature, then transfer it to an air-tight container and store it in the fridge for up to 3 days.

The soup also freezes well! You can store this soup in the freezer for up to 3 months.

It's a great opportunity to make a big batch of the soup, then store it for a quick and easy dinner! Simply allow for the frozen soup to thaw at room temperature, then heat it up in the microwave before garnishing & enjoying it warm.

Where can I buy Poblano Chilies outside of Mexico?

Poblano chilies are easily bought cooked and tinned! You can try your local Amazon website or the world foods aisle of your local supermarket.

Which chilies are in caldo de queso?

Traditionally, caldo de queso uses Anaheim Green Chilies, also known as California peppers. However, these chilies are not easy to find beyond the Northern part of Mexico and this dish is therefore often made with 'chile poblano' instead. 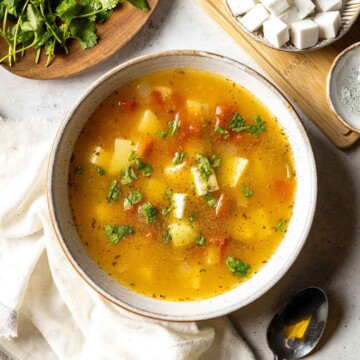 This Caldo de queso is inspired by the classic North Mexican dish! It's hearty and warming and made with potatoes, cheese, poblano chilies and tomatoes. This tasty soup is ready in 30 minutes or less and a great dish to make for dinner or as a starer!
Print Recipe Pin Recipe
Prep Time 5 mins
Cook Time 25 mins
Course Main Course
Cuisine Mexican
Servings 4 portions