If you would ask me how many pizzas I have had in my life, I absolutely would not be able to give an answer. All I know is that it would be way more than anyone could count – and a large number of these have actually been vegan 😉

Pizza Express was actually one of the first places I had vegan pizza at when eating out – though they did not have any vegan cheese back then (I still loved it though!) I was therefore even more excited when they’ve invited me to their pizza making class at their newly refurbished branch in Leadenhall Market!

If you are paying London a visit, you should definitely go see Leadenhall Market – such an iconic and beautiful place – and also one of the locations that the Harry Potter movies were filmed at (in case you are just as much a Harry Potter geek as me ;))

Have a look for yourself: 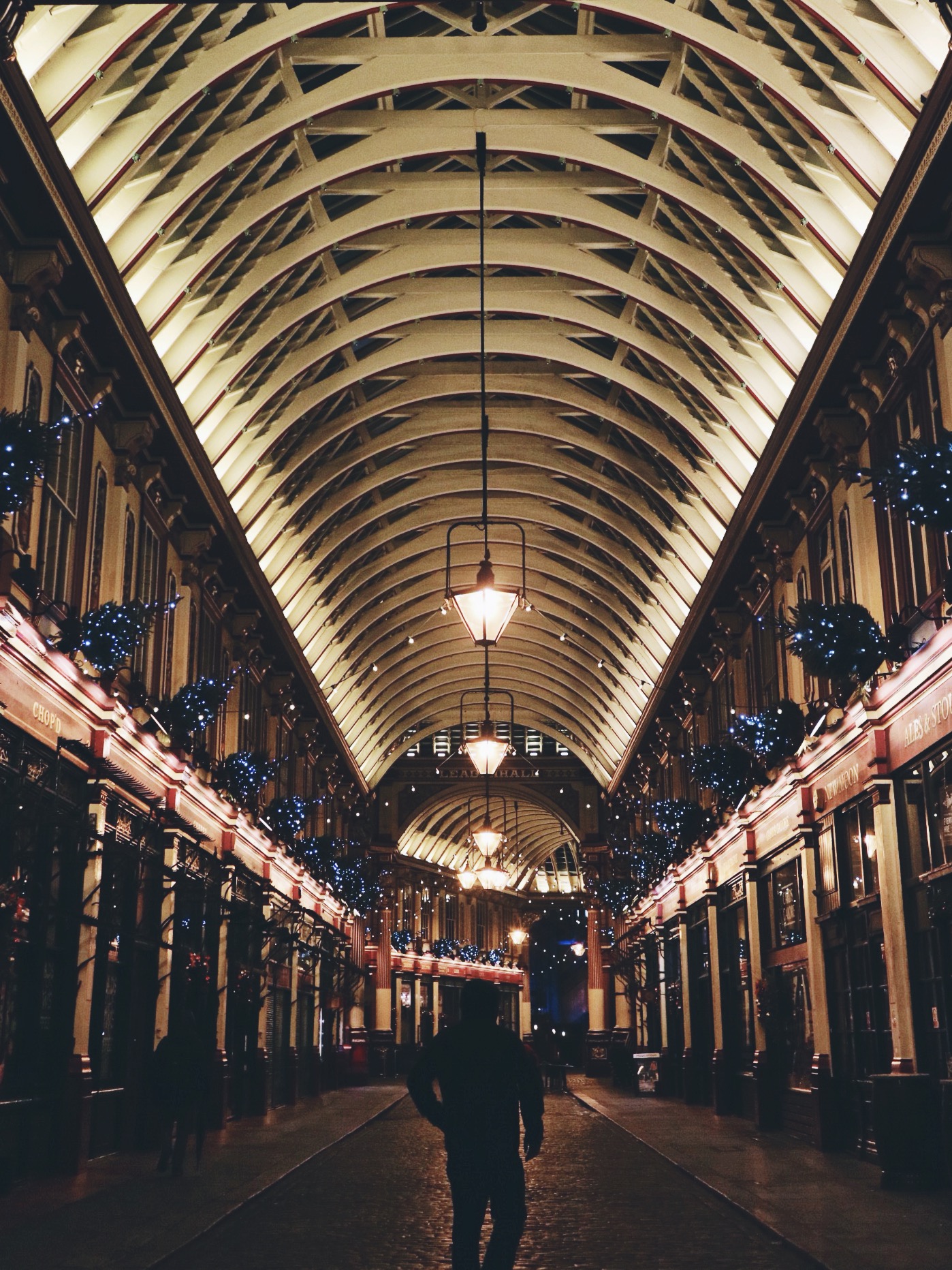 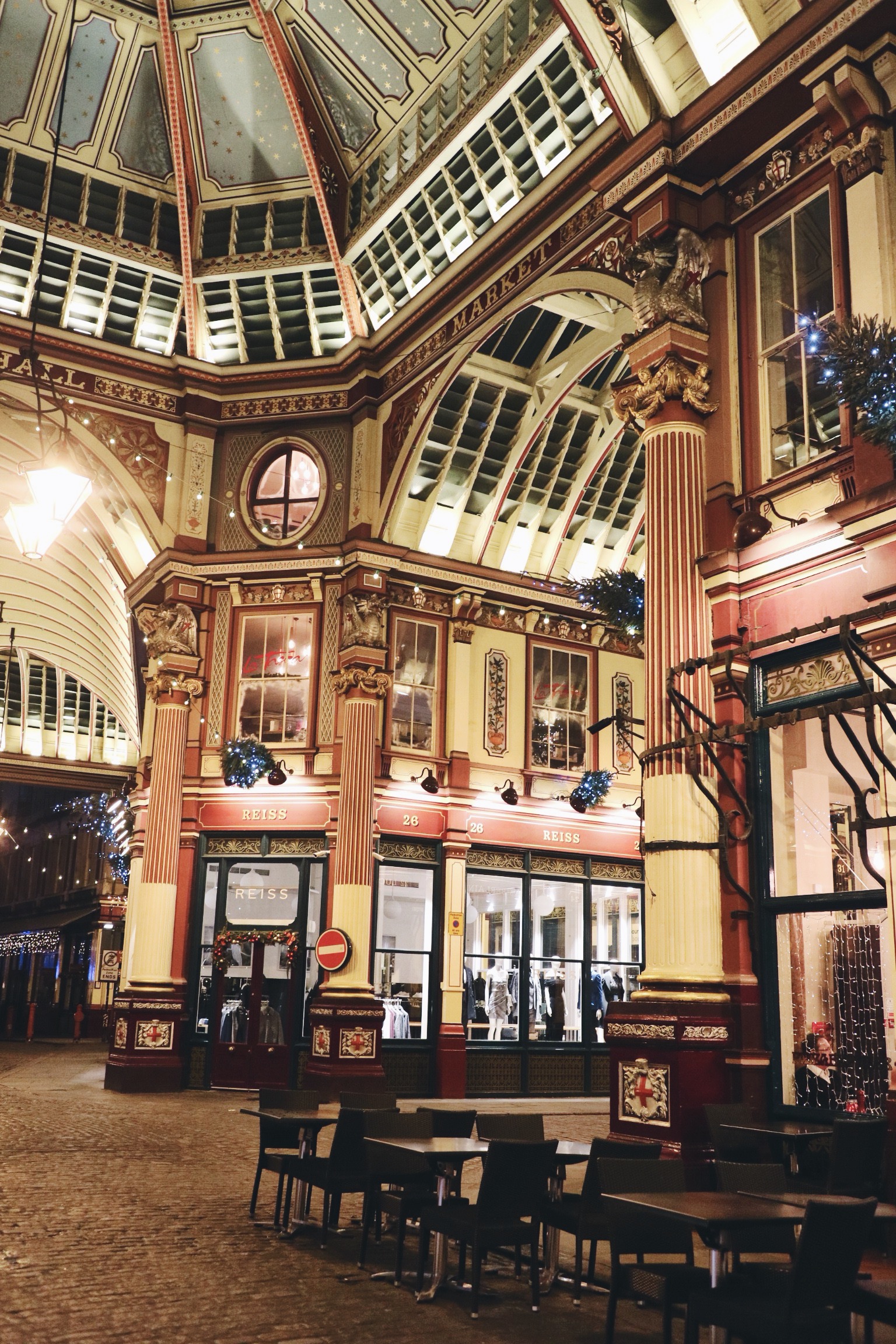 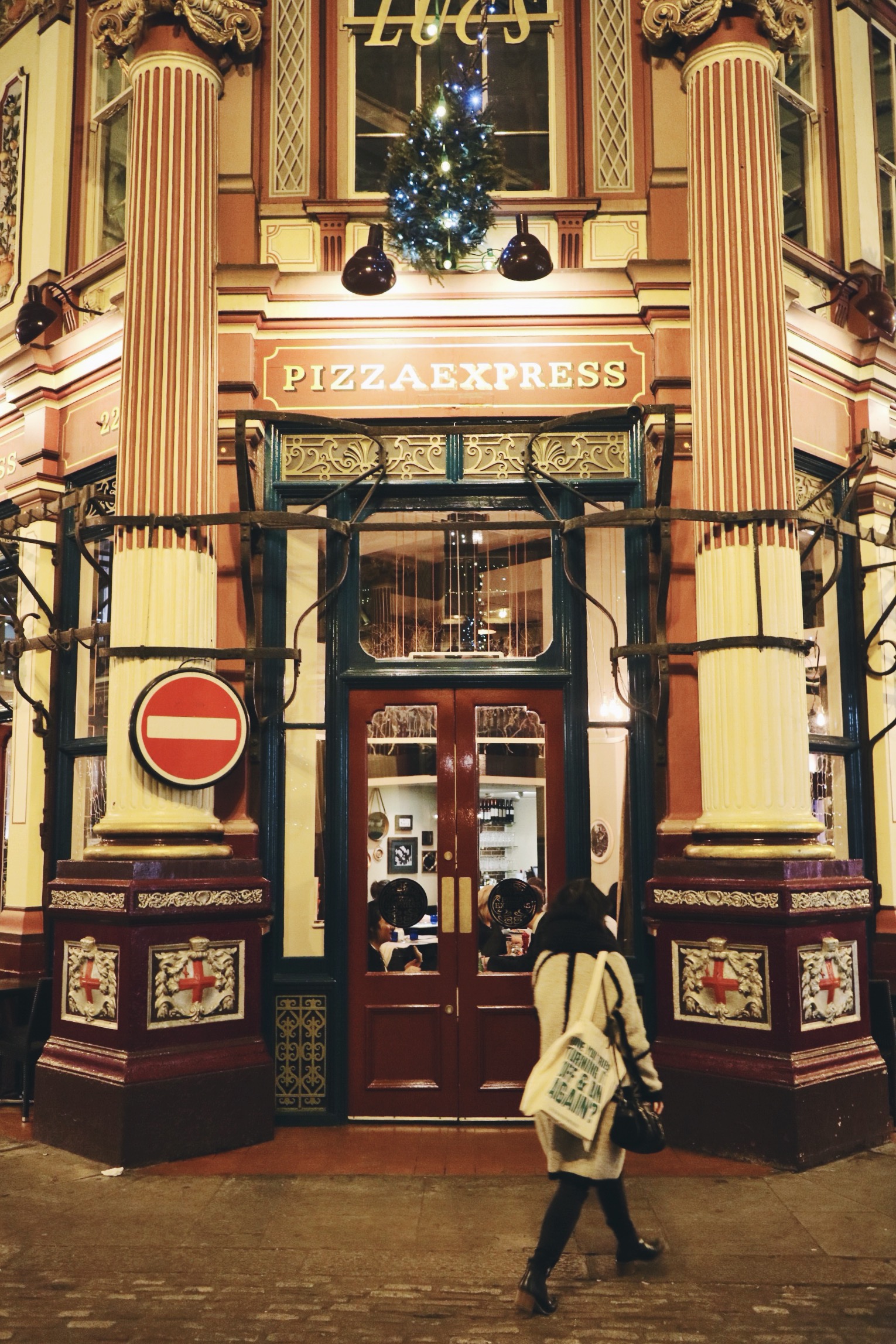 Leadenhall Market actually has a lot of history – and the Pizza Express branch has just recently had a refurbish to bring out some of the history of the beautiful building.

Leadenhall was located in the centre of the Roman London, which is the financial district of London today – and it was traditionally a meat & poultry market (You can imagine that I am happy it is no longer one today ;))

The covered market is one of London’s oldest markets dating back to the 14th century and with its stunning building structure it’s amazing to see how Pizza Express have brought out the beauty of its historic architecture  especially in the basement section of the restaurant. Now if someone would walk past the restaurant they might think it is a small branch with only few seating opportunities, but beneath a staircase the larger part of the restaurant is showing with the beautifully restorated walls of the traditional London market: 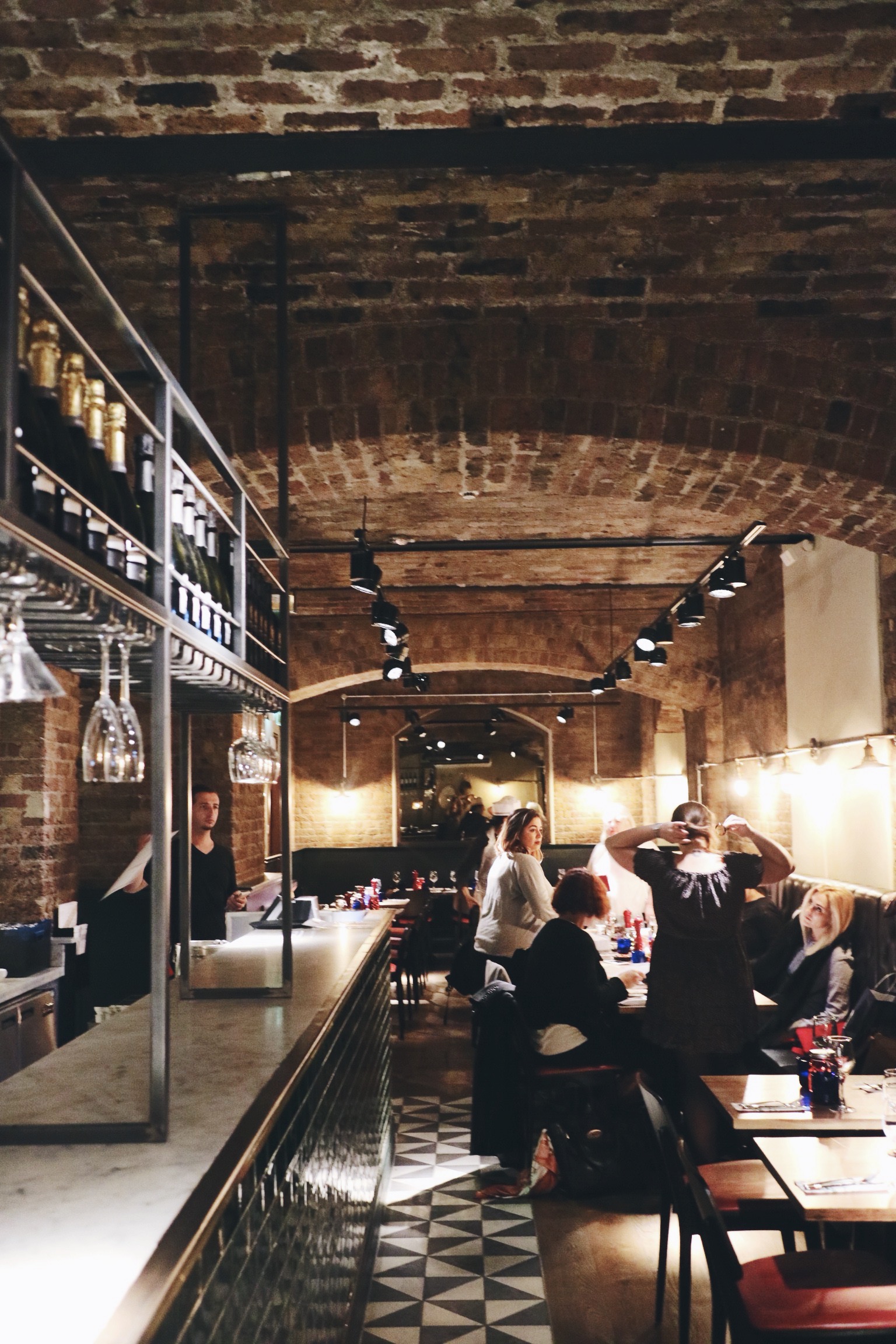 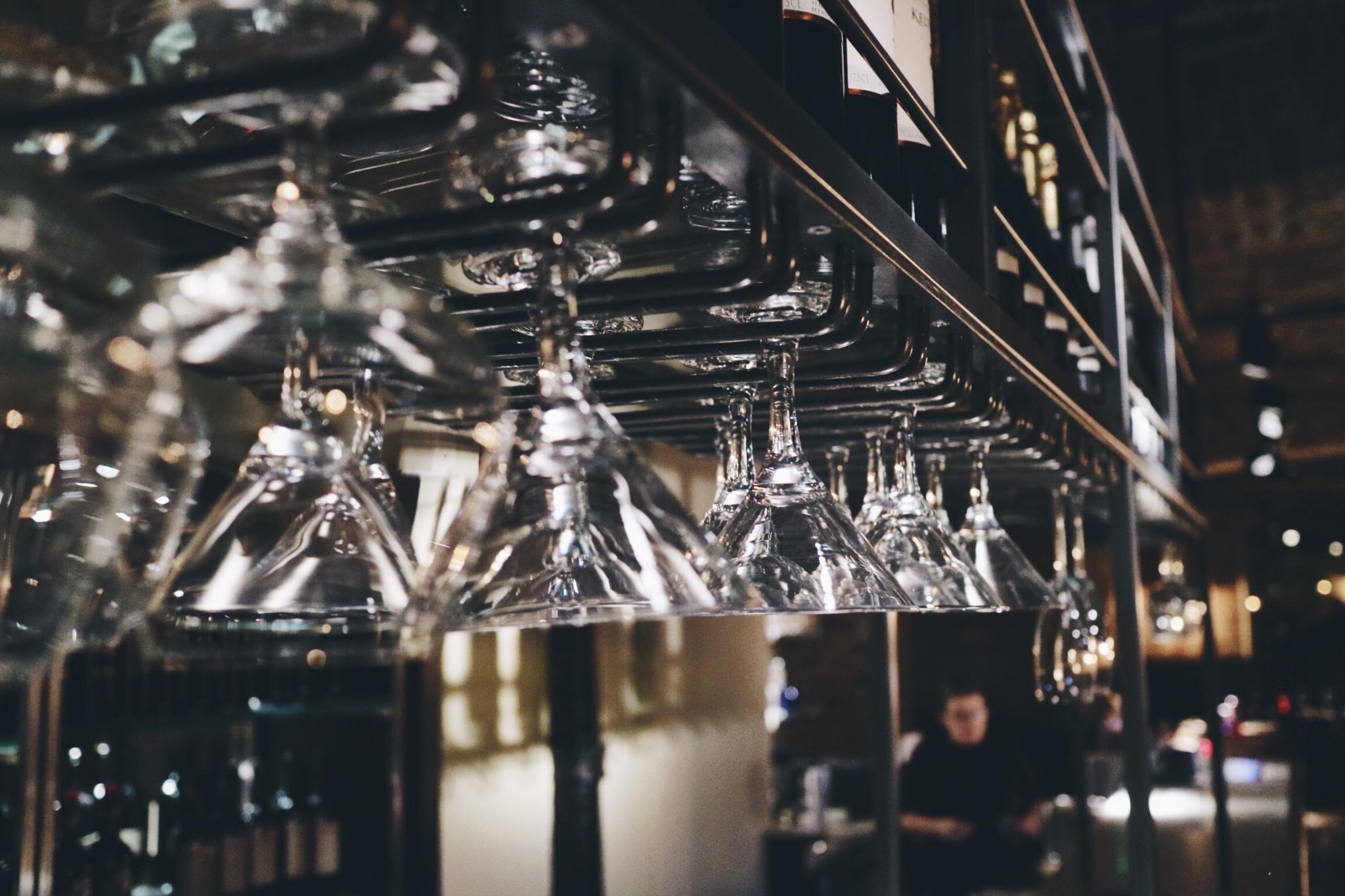 As the only vegan food blogger visiting for the eve I knew I was definitely up for a challenge. It was lovely to meet so many amazing and super friendly bloggers from other genres during the evening! Something I was missing a little on other foodie blogger events in the past – which doesn’t mean I don’t enjoy the company of my lovely familiar faces 😉

However, the pizza making event was definitely a great change, what I know for sure though: Don’t wear black velvet shoes to a pizza making event – there will be A LOT of flour! (I’d rather tell you now, so you can avoid making the same mistake as me, ha!)

After some welcome drinks we were lead to our ‘dough station’ where the lovely staff had prepared a ball of dough for each of us to work on. Whilst I have been making pizza myself at home before, I have definitely have not felt so self conscious whilst stretching my dough – after all there were some dough experts in the house 😉 After a look around I saw curious faces constantly checking what the Italian chef was doing with his dough – so I am glad I was not the only one not 100% sure what the right dough kneading technique was (feeling a little wiser now though!) 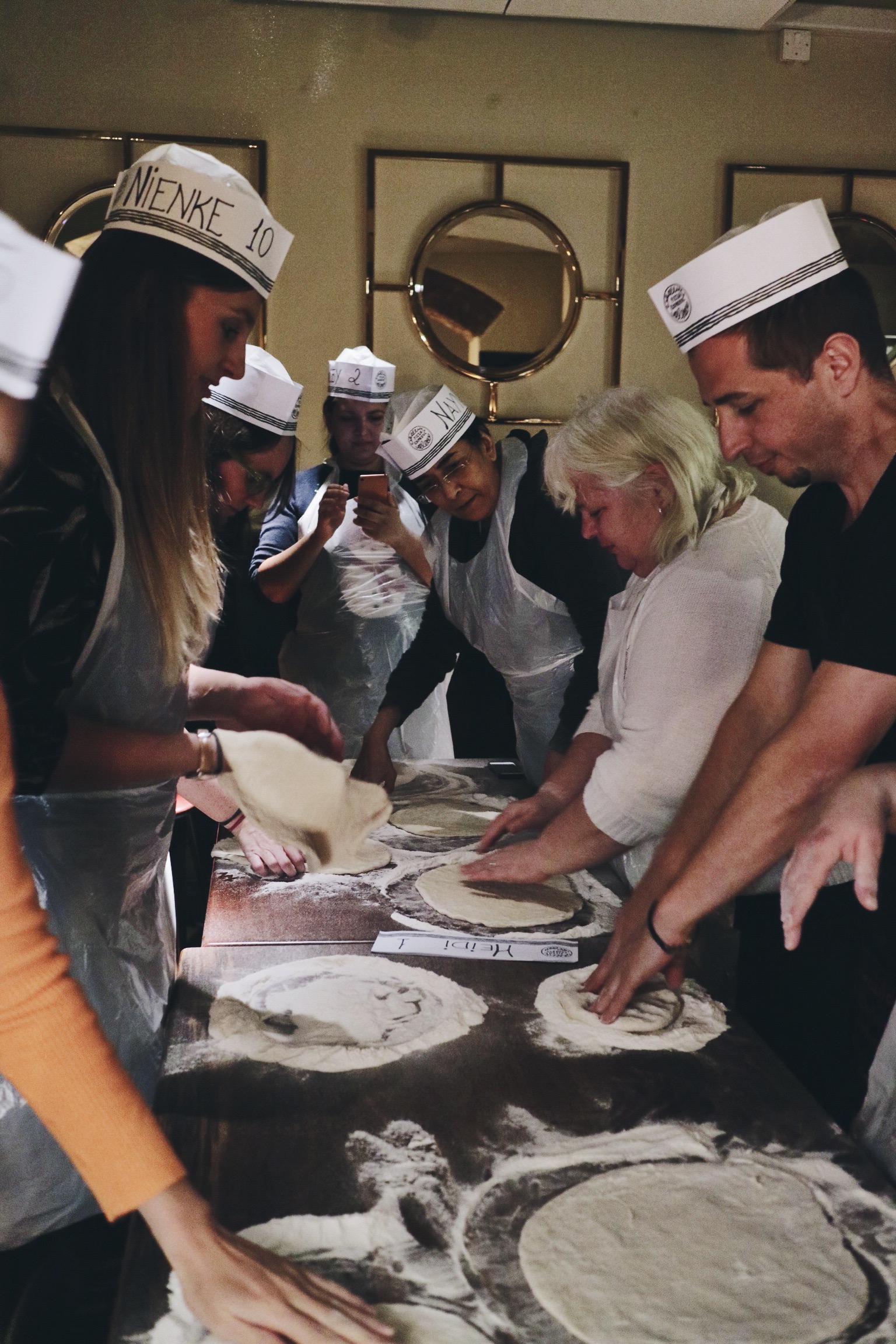 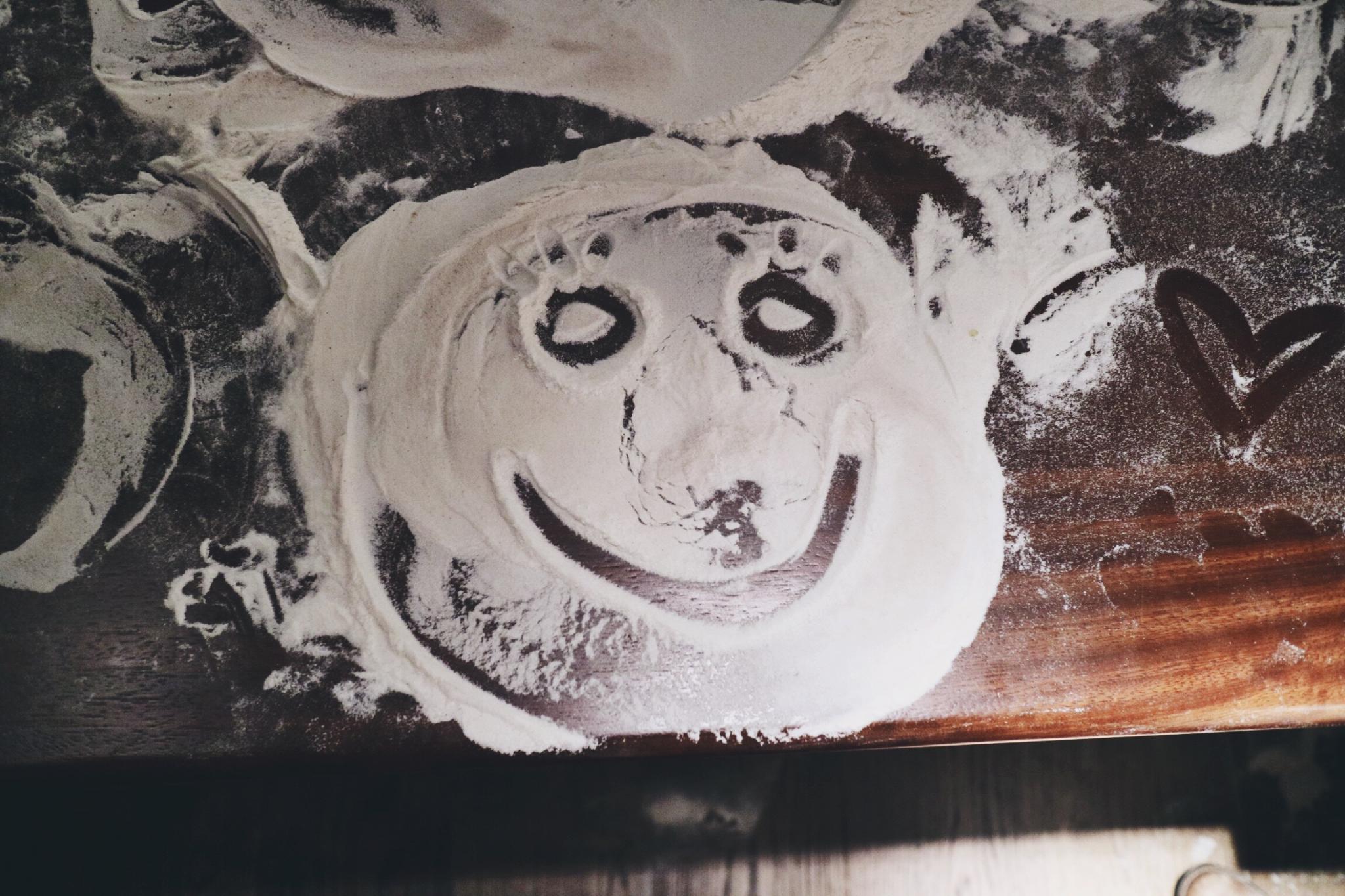 Once the dough was stretched – and some thrown in a magical swirl through the air (ohhh no, I did not attempt that, who knows how that would have ended?! My shows were already covered anyways, ha) – it was time for the tomato sauce.

And yet another thing learned: traditionally the Passata is now spread onto the pizza base, but a spoonful of sauce set in a corner of the pizza, and the base then gets shaken in order to distribute the sauce across. Who knew?

I definitely still need some practice until I can leave the good ol’ spoon in the cupboard for this. 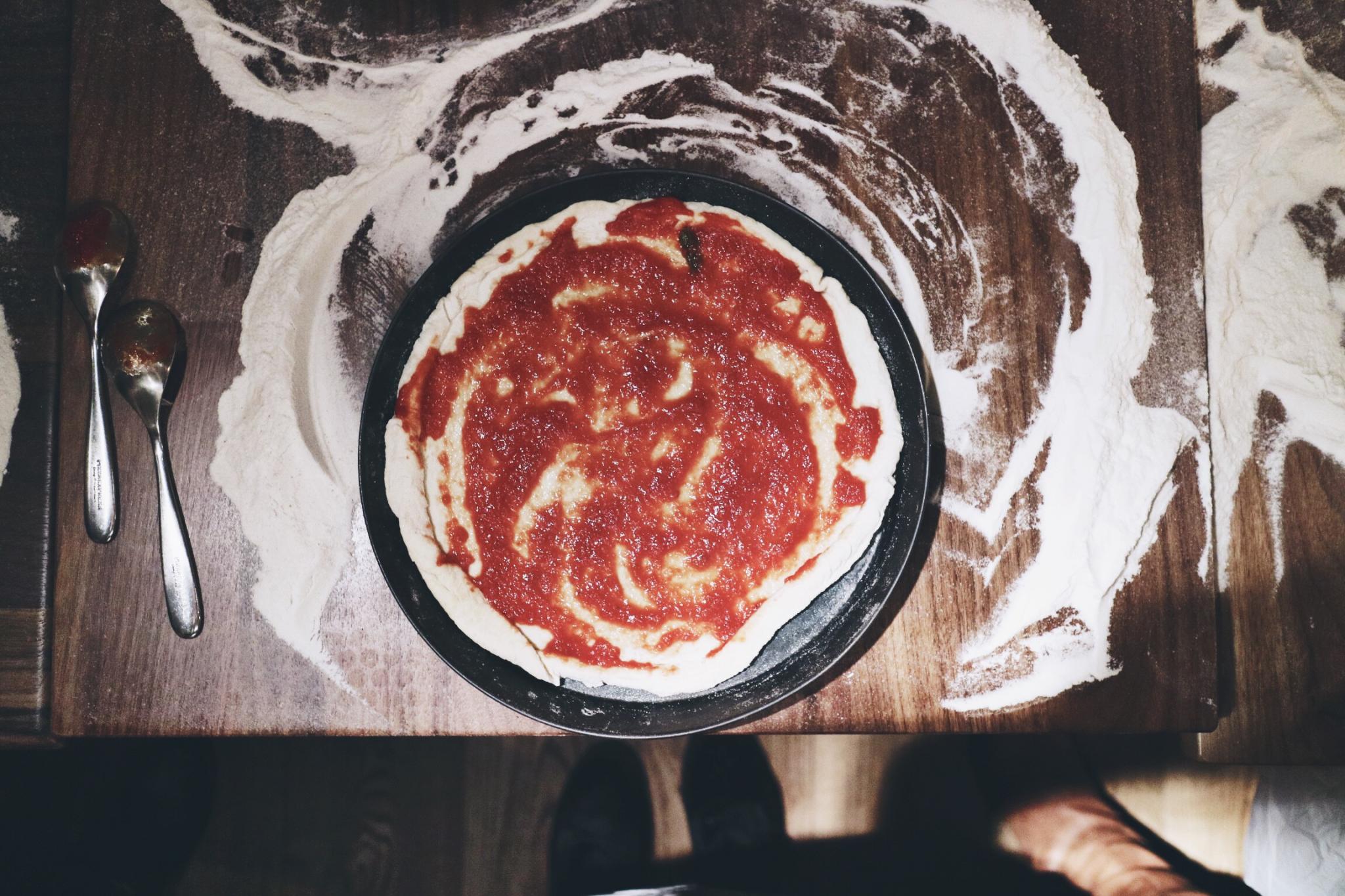 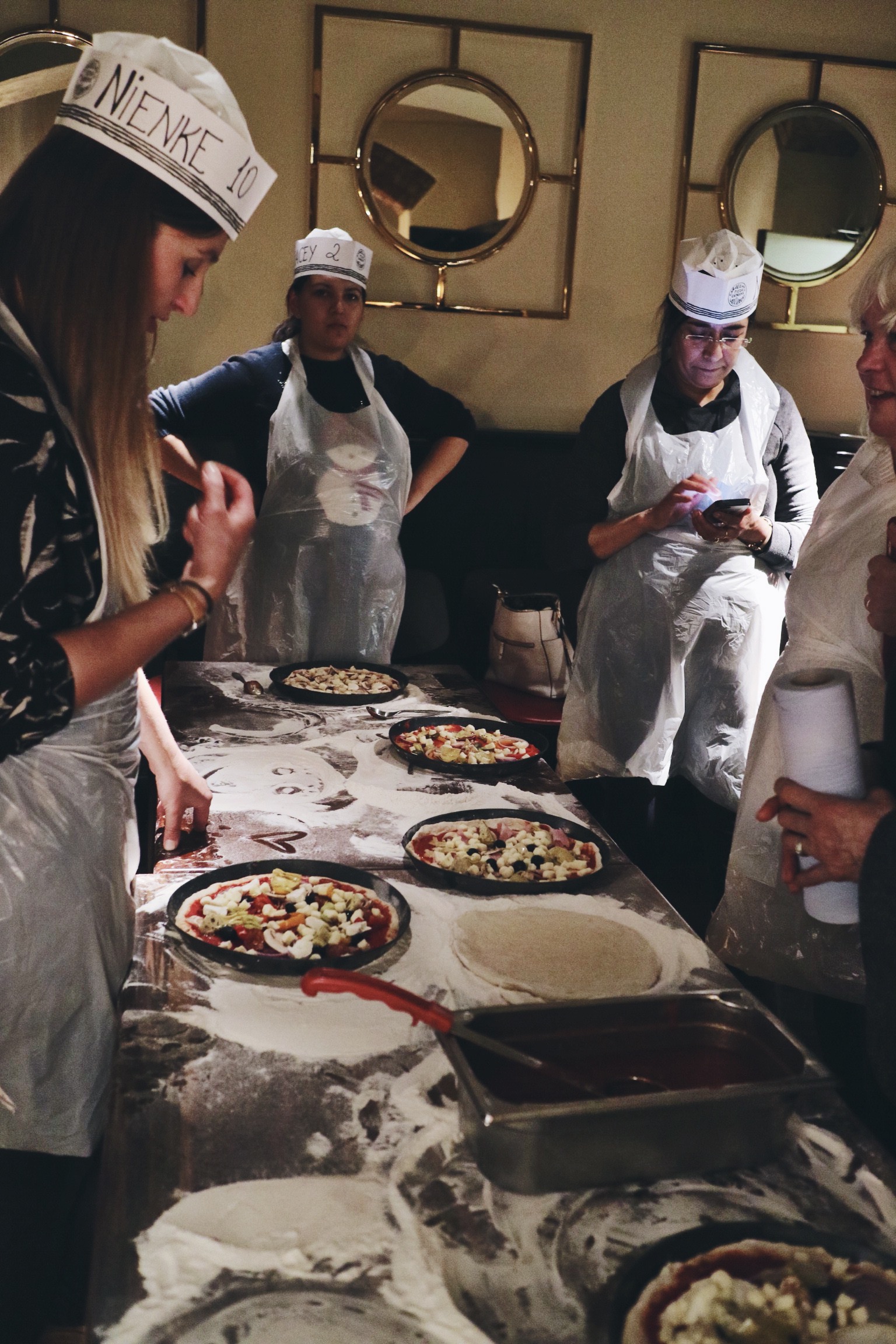 Guess what was next? Right – my favourite part: Toppings, of course! Though the vegan options were a little limited, the friendly staff did not hesitate once to bring me some vegan cheese for my very own vegan pizza. And to be honest, whilst I like combining ingredients and flavours, my motto for pizza is ‘less is more’ – after all, half of the toppings will land on the plate (if you’re lucky) anyways when overloading the pizza. I chose artichokes, mushrooms & vegan cheese for my pizza on the eve – and after spending some time in the oven drizzled some garlic oil on the top (garlic oil is life!)

But have a look yourself and let me know what you think of this creation: 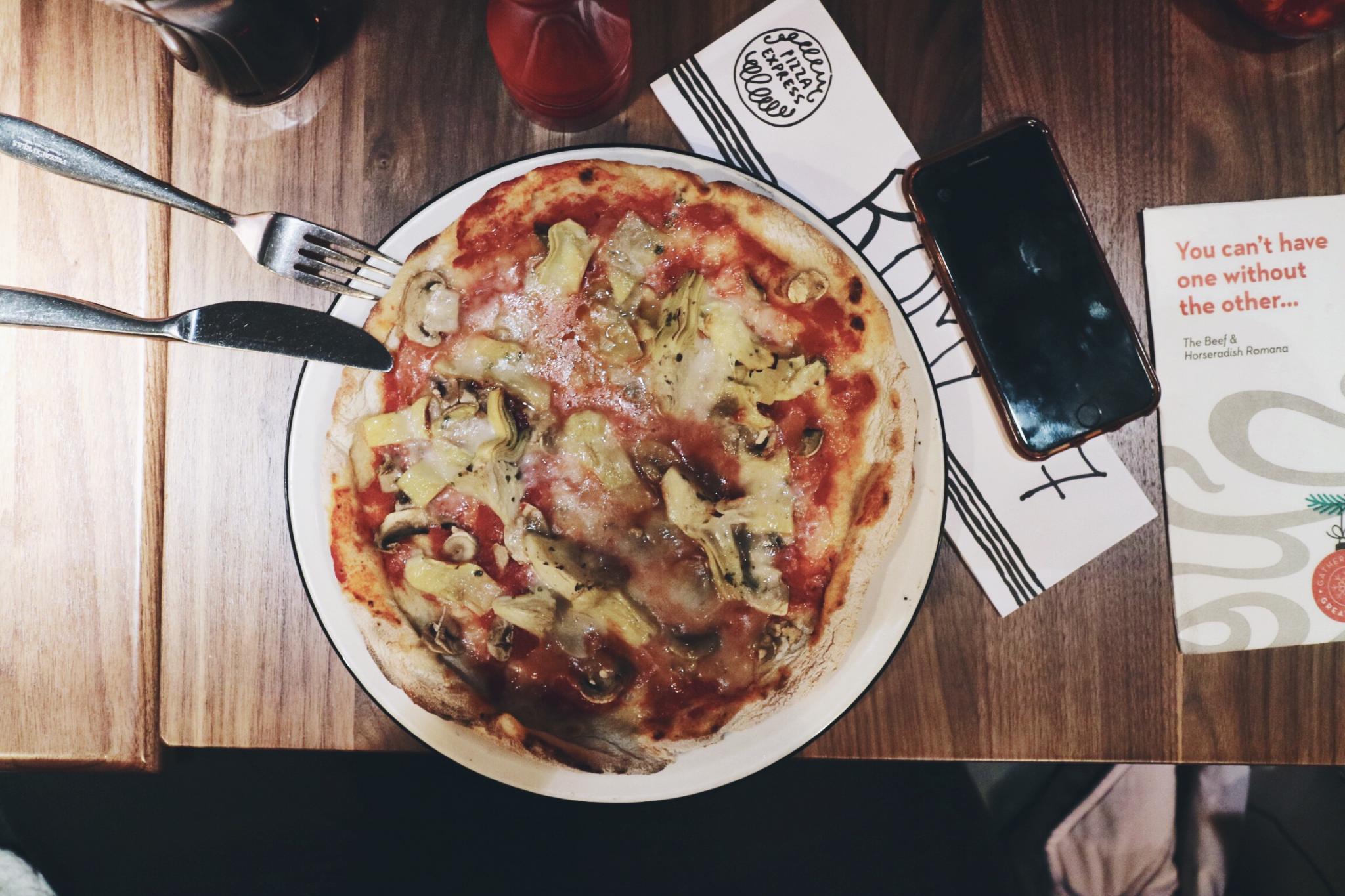 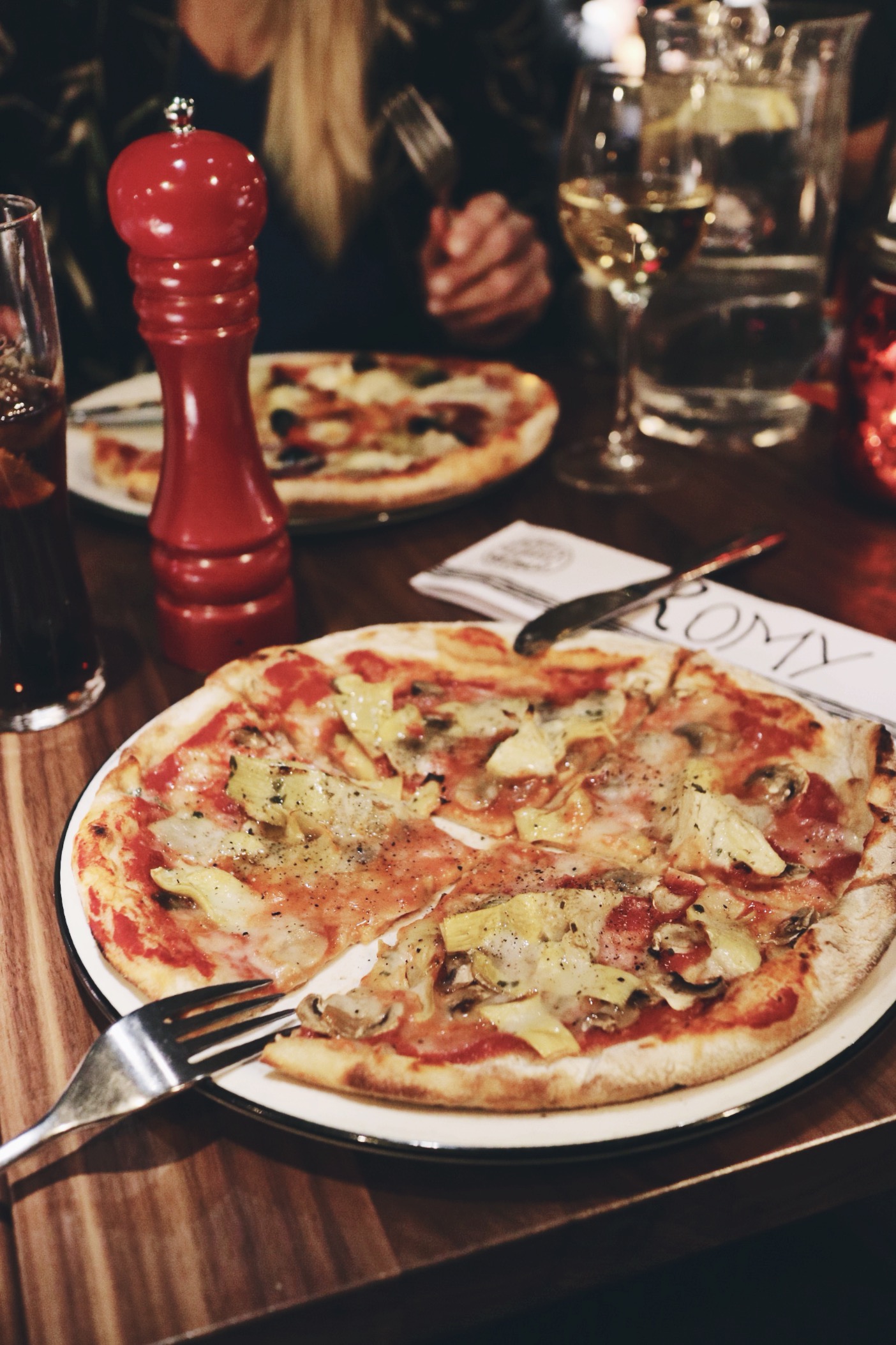 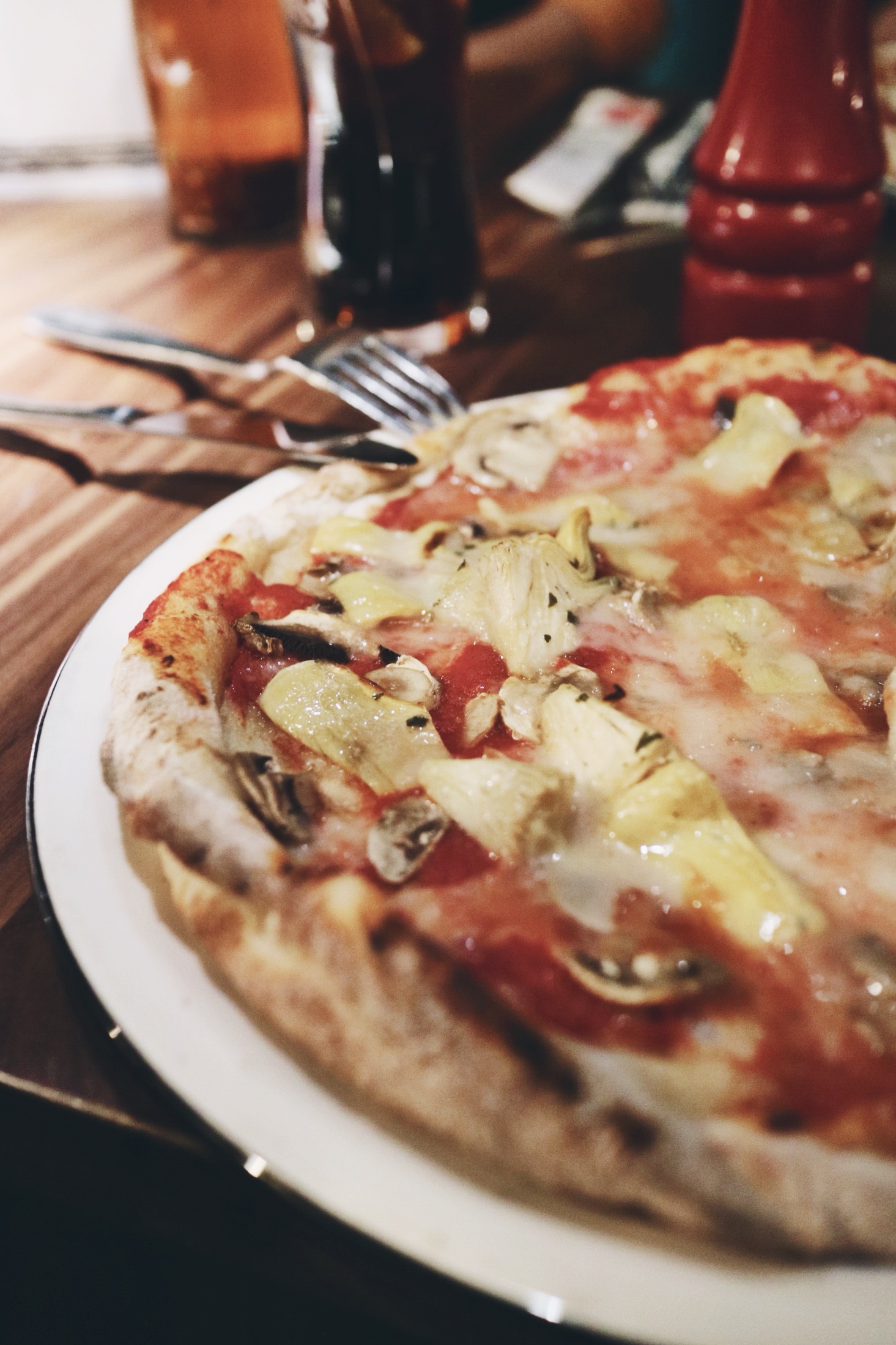 Pizza Express has been using the same supplier for their passata since they opened their first restaurant in 1965.

The event was definitely great fun and I can only recommend the pizza making experience for an eve out with friends (there will be definitely plenty of laughter involved when attempting the pizza-dough-throw 😉 The eve was definitely full with pizza making fun and meeting new faces – though I am pretty sure I won’t be able to throw my dough this professionally any time soon, ha! 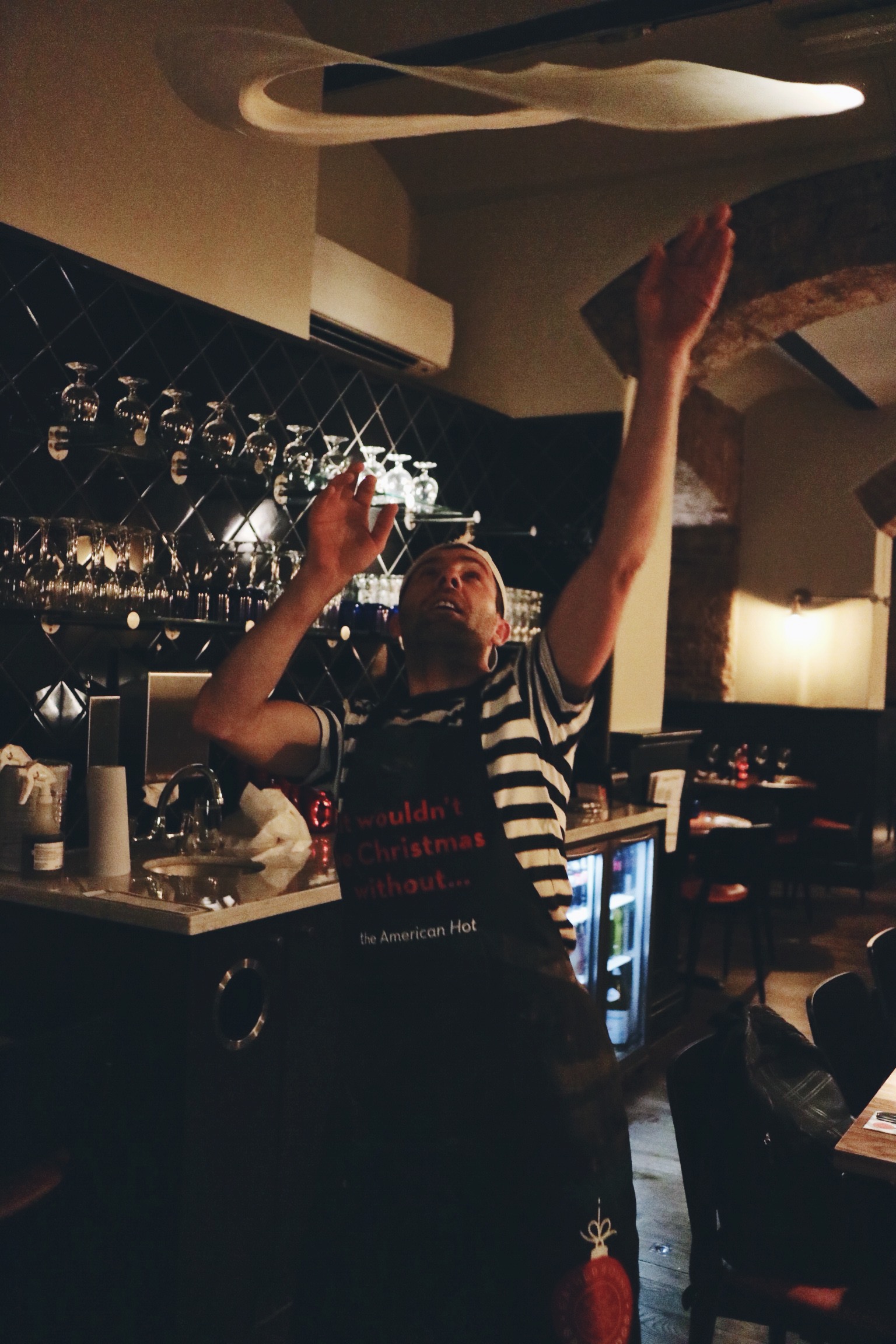