Vegan food at a steakhouse? Yes, you read that right!

And it might just sound crazy – at least that’s what I thought at first glance when I was invited to try the Veganuary menu at Gillray’s Steakhouse in London. And then I figured I did not misread and they’ve actually created a fully vegan & fancy menu!

Well isn’t that amazing? After all it shows that even a steakhouse is already realising the rise of the vegan community and feel the need to cater to it – this is the start of a new time I can tell you!

This was my first ever visit to Gillray’s, so I didn’t quite know what to expect – but the imagery on their website pretty much already told me that this restaurant is all about fine dining. As part of the Marriott Hotel right next to the London Eye and right opposite the Big Ben, Gillray prides themselves with creating authentic English cuisine and providing excellent service to their visitors. 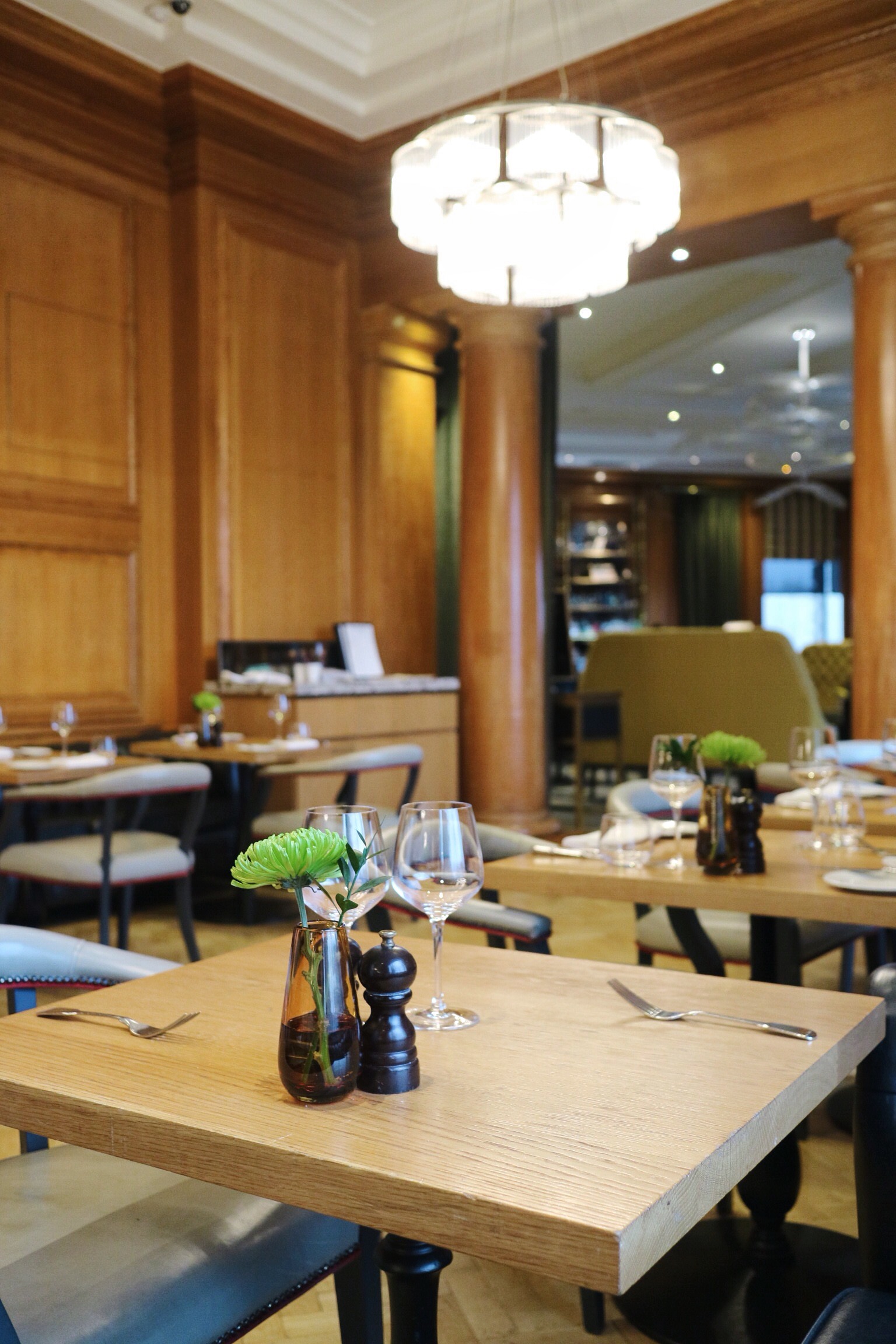 With the growing trend of veganism, they wanted to create a vegan menu to make everyone feel welcome at Gillray’s, their vegan menu was a special tasting menu for Veganuary, however they have now decided to  expand their salad section in the new a la carte menu.

Now let’s get down to business! What does their vegan menu have to offer?

For their Veganuary menu they launched 2vegan starters, 2 mains and 2 dessert options – not a huge vegan choice, but hey: I totally understand that they’ve got to ‘test the waters’ before fully committing to more vegan options on the menu.

The selection however made it easy for  Nick and me to choose what we wanted to try – and we simply divided the items so that we would get to try it all (we’re so clever, right?) and before the food arrived we were also treated to 2 super-sweet, vegan strawberry cocktails. 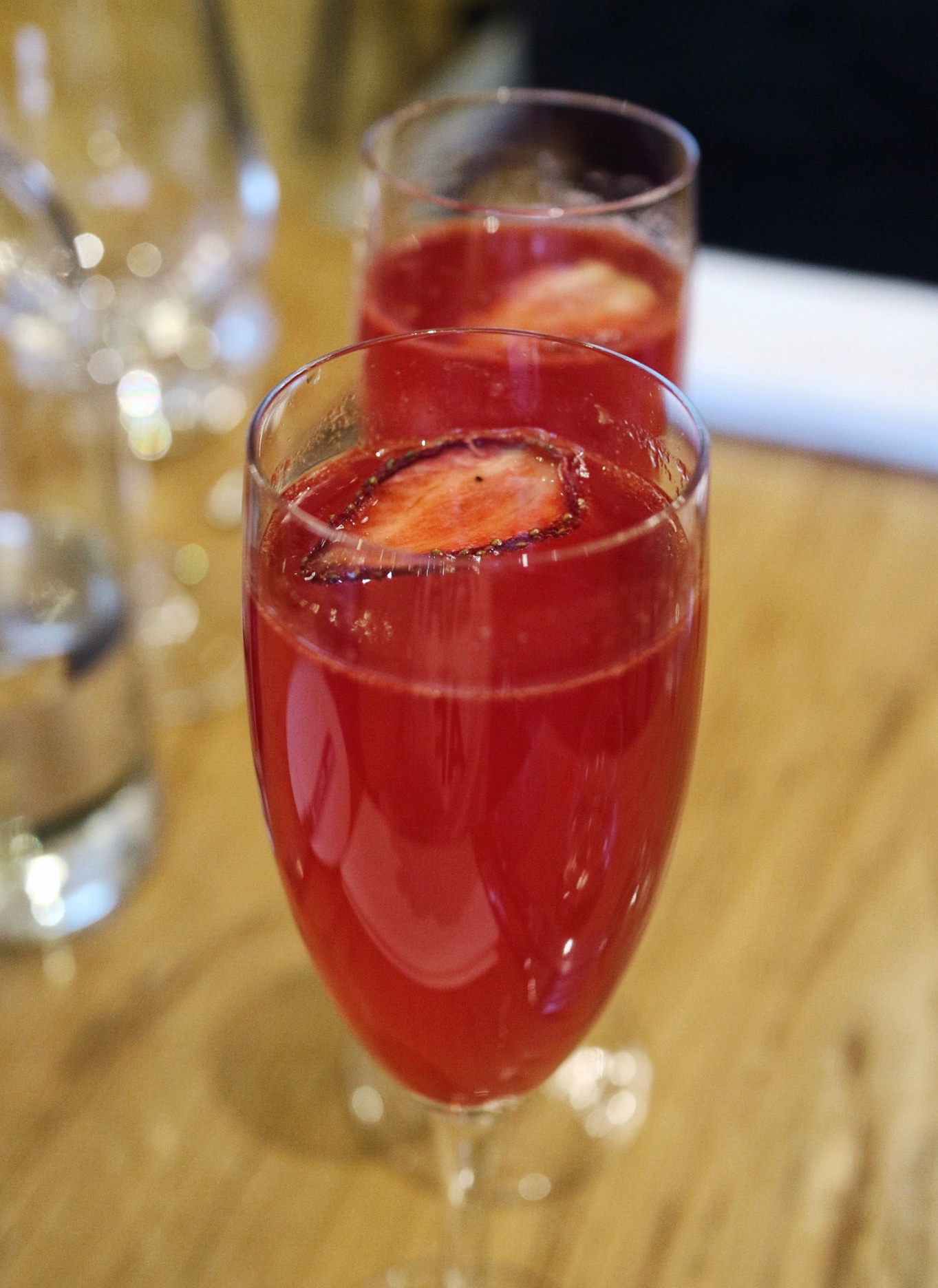 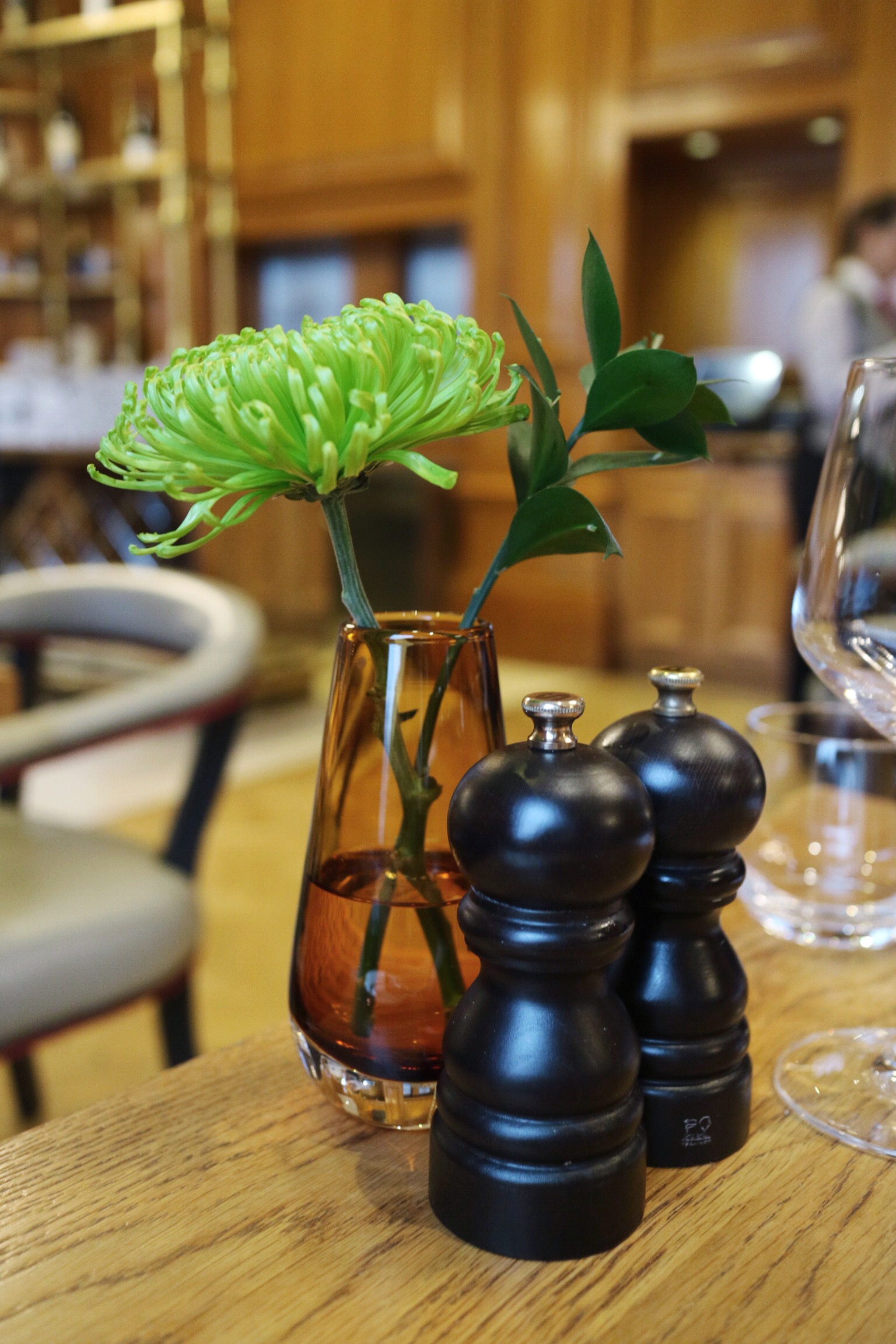 For starters Gillray’s had a Butternut Squash and Chilli Salad on offer that Nick picked – because I simply can’t eat chilli 😉 Instead I went with their cauliflower fritters which came with the most gorgeous vegan Hollandaise! (See for yourself below!) 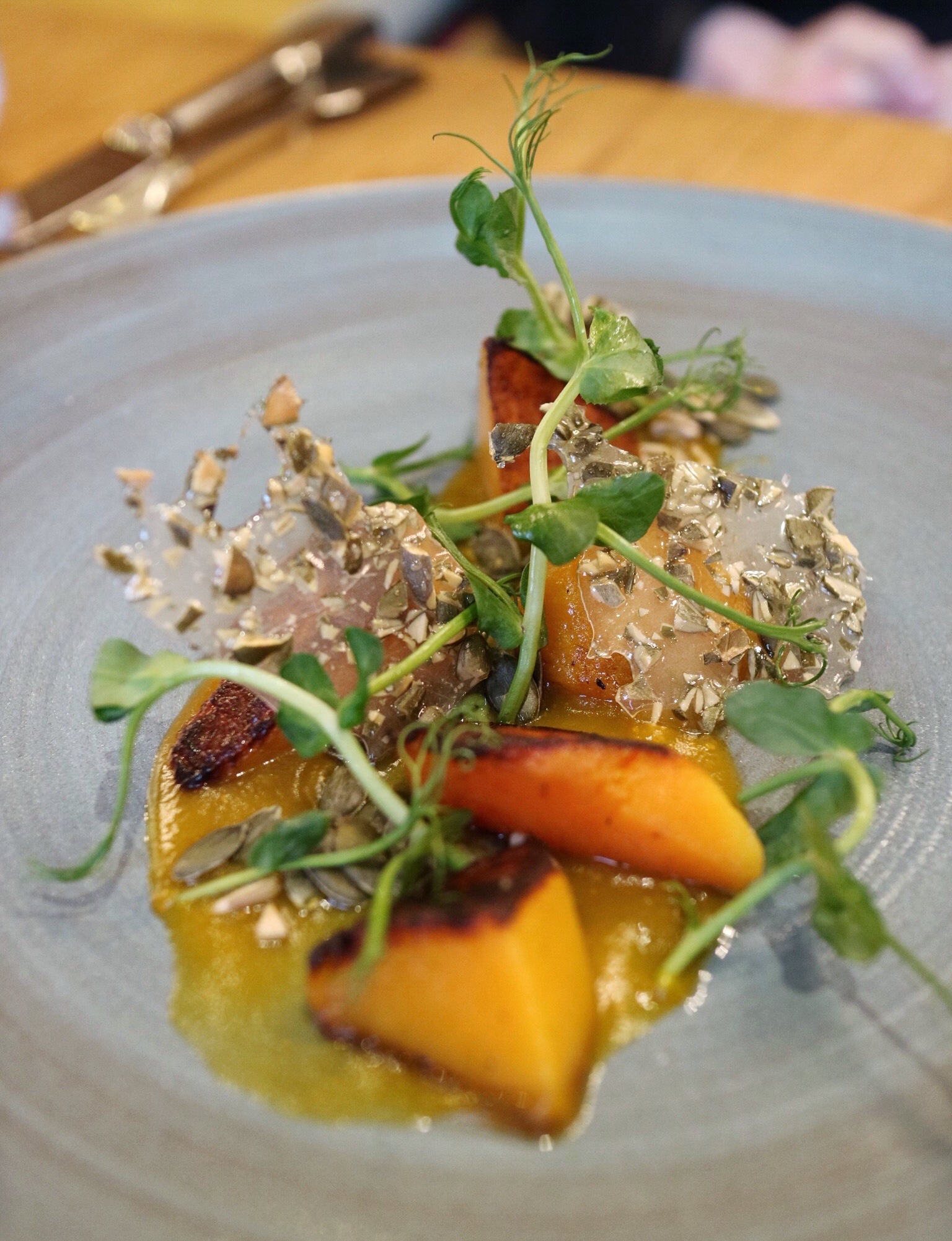 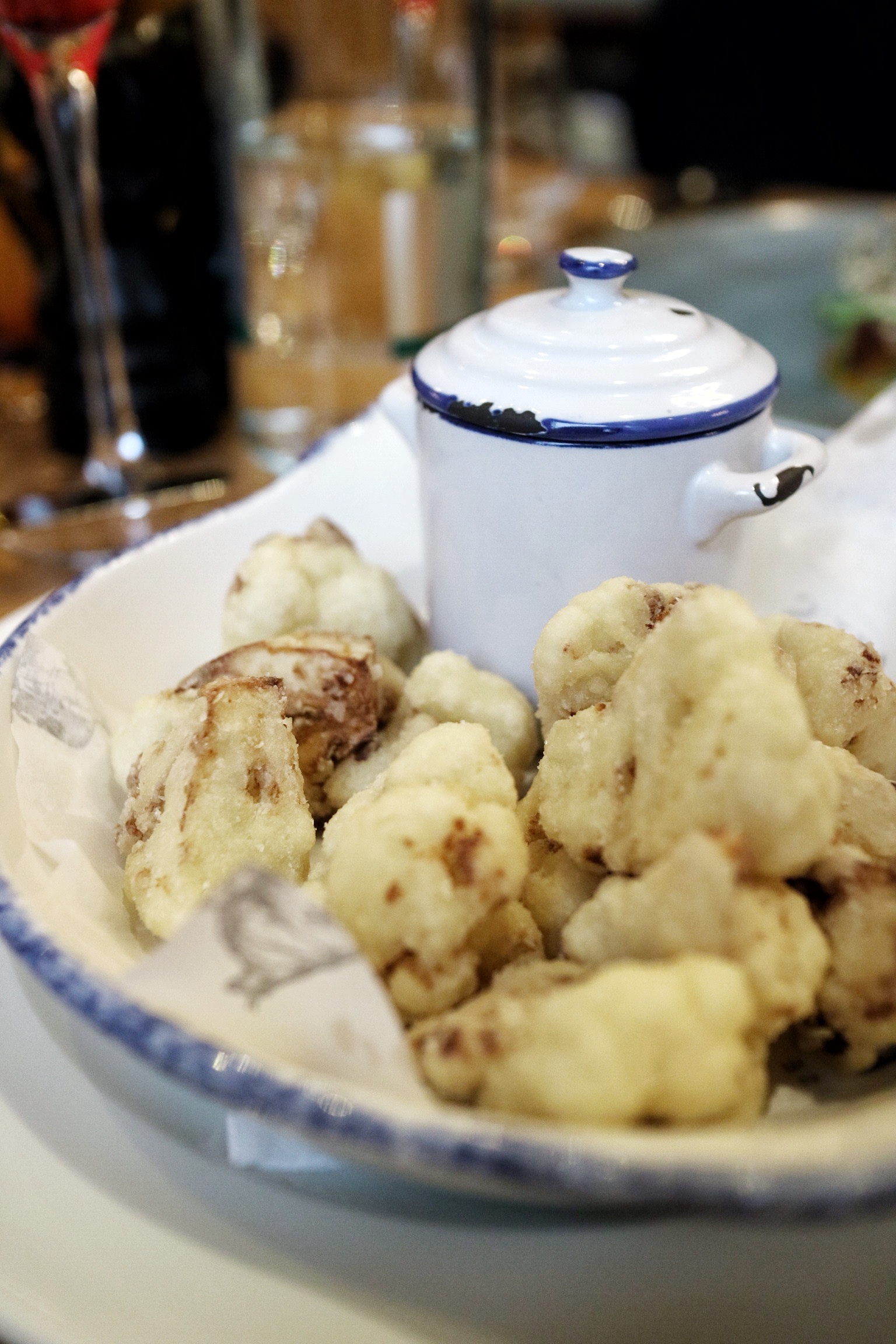 We have to admit that we wondered a lot about the portion size of both dishes – Nick literally had 4 small pieces of butternut squash on his plate whilst I seemed to have half a head of cauliflower with my fritters. We weren’t expecting large portion sizes as we knew this restaurant was more on the posh side, but it would make sense to have roughly equally filling portion sizes in their starters.

We found the butternut squash starter a little disappointing as the portion size was literally tiny. The fritters definitely won with their truffle flavour & amazing vegan Hollandaise!

Again – 2 options to choose from. I went with the Baked Red Onions which came with Pearl Barley & Kale Stew in Vegetable Broth. I have never seen such neatly cut carrots as the ones that came in my broth! Someone must be working with a measuring tape in the kitchen as all of them were perfectly equal!

Probably the most stunning part of my dish – this time I was the one ending up with a small portion of only 2 red onions of medium size. The pearl barley that the onions were stuffed with had a tomato-ey sauce, which did not go with the flavour of the red onions in my opinion – a more contrasting flavour would have suited better.

Nick had made the right choice and went with the Aubergine and Lentil Dahl, which was beautifully presented. It came with a small portion of orange & coriander salad, which the orange-fiend Nick left for me to enjoy (I really liked it!) 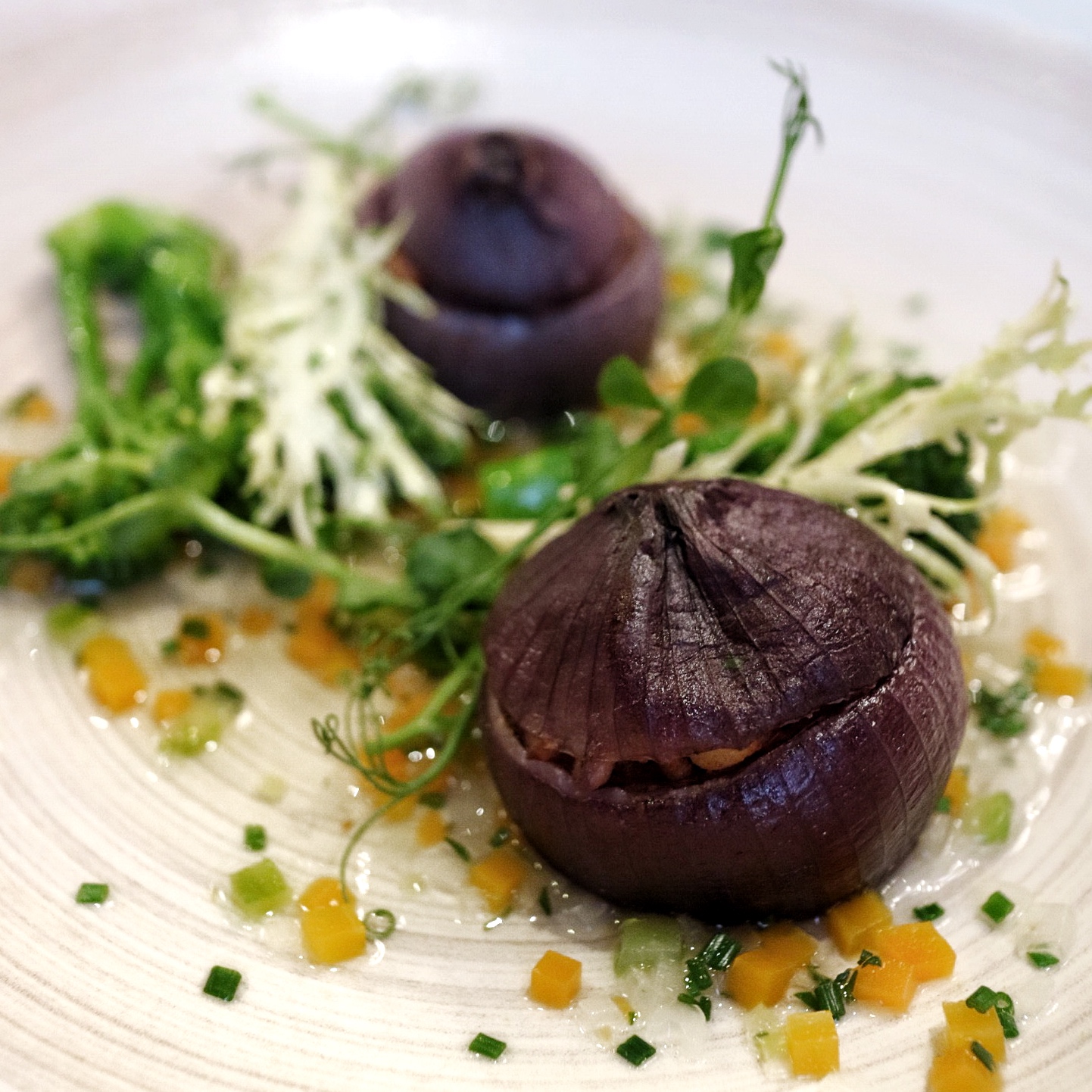 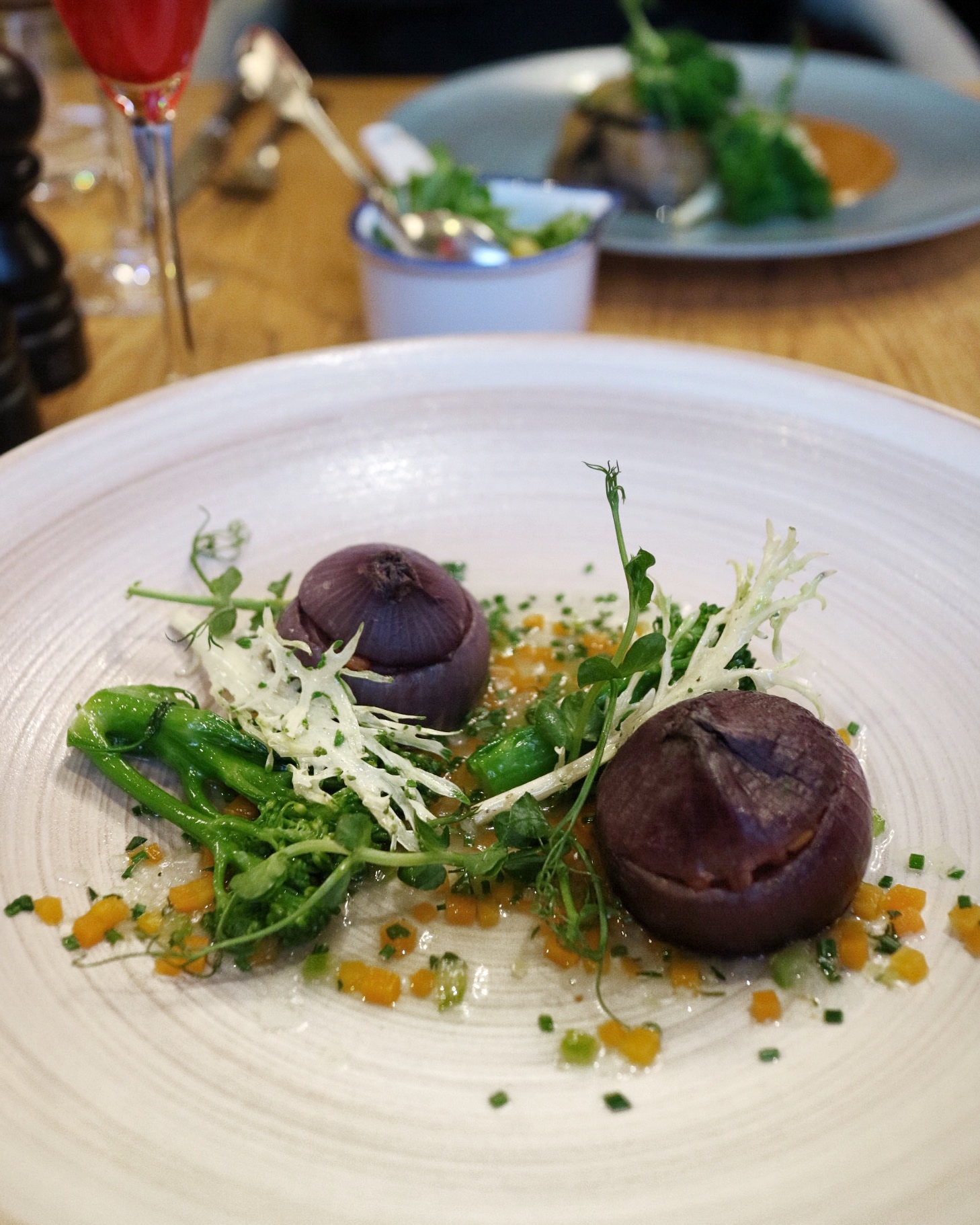 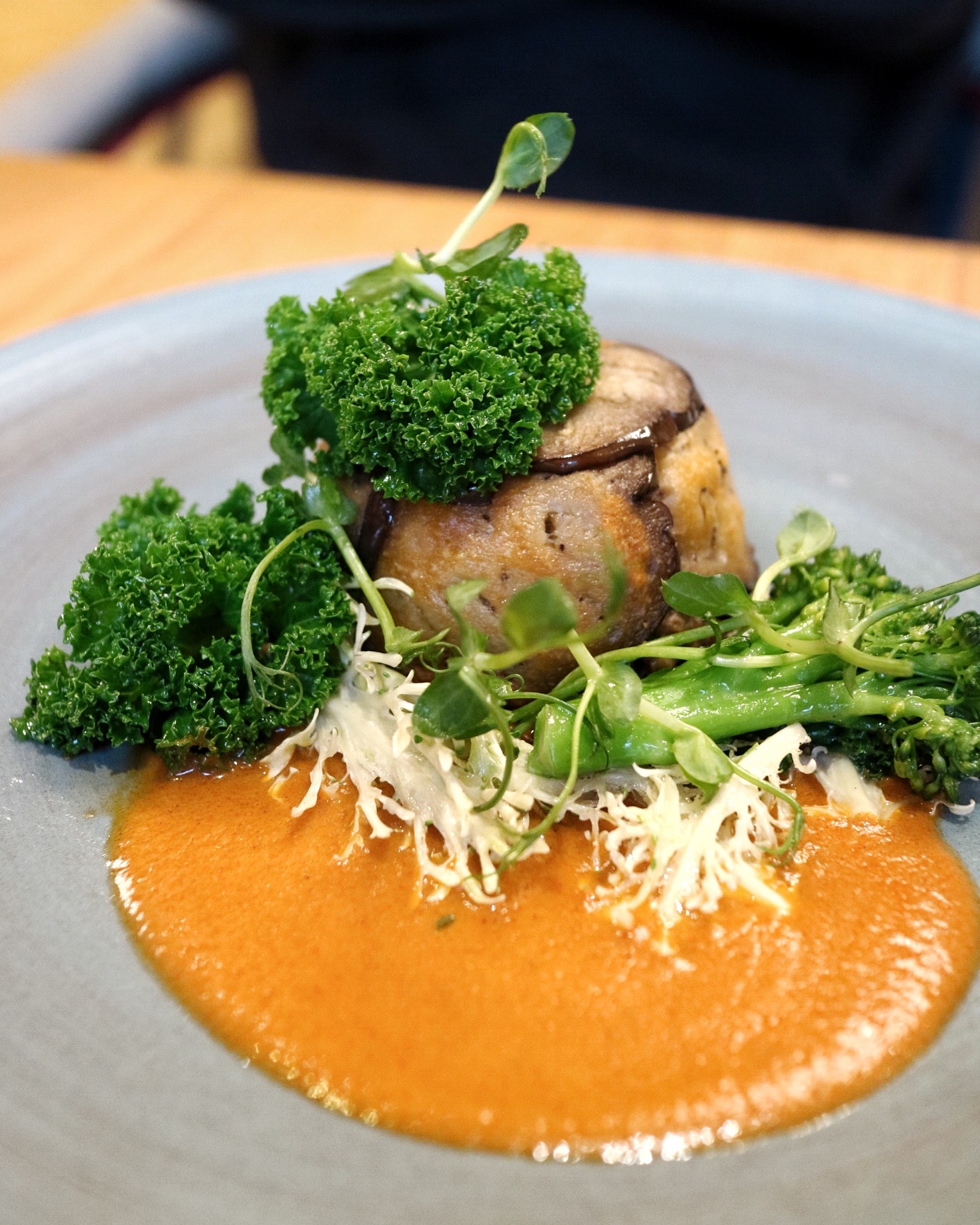 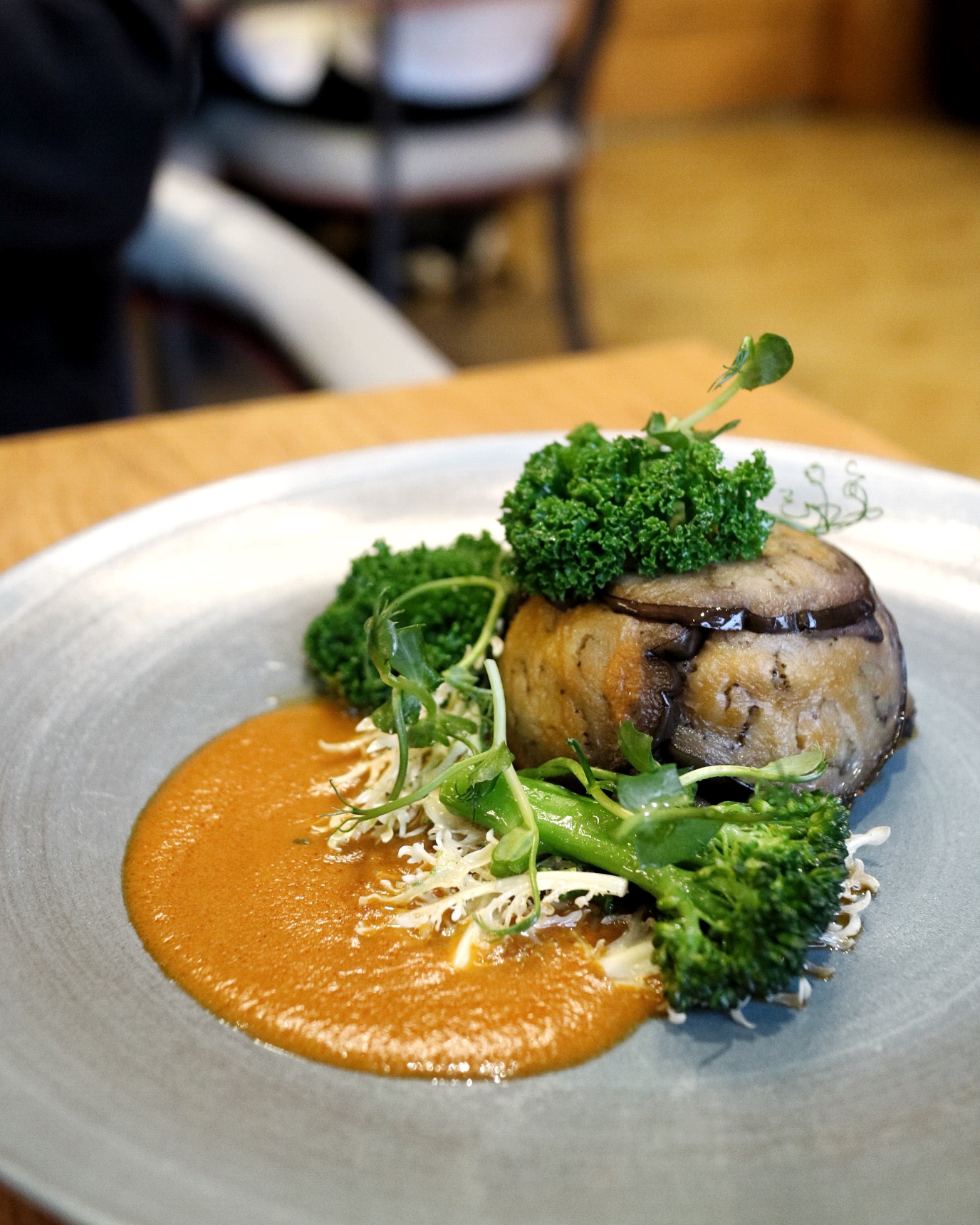 The dessert was definitely the big surprise of our visit. After the previous portion sizes we weren’t expecting a huge dessert and were definitely wow’ed when they arrived.

Nick chose the dark chocolate mousse, whilst I went with one of my all time favourites: apple crumble!

As a deconstructed apple crumble, this was truly a big portion for a dessert – and difficult for me to finish as my natural taste buds are more on the savoury side. The crumble was super delicious and I loved the addition of berries + baked pear!

Nick also enjoyed the super chocolate-y mousse in combination with the berries! I got to try it as well, but happily stuck with my crumble as dark chocolate seems lovely to me only in tiny portions (I’m weird, I know!) 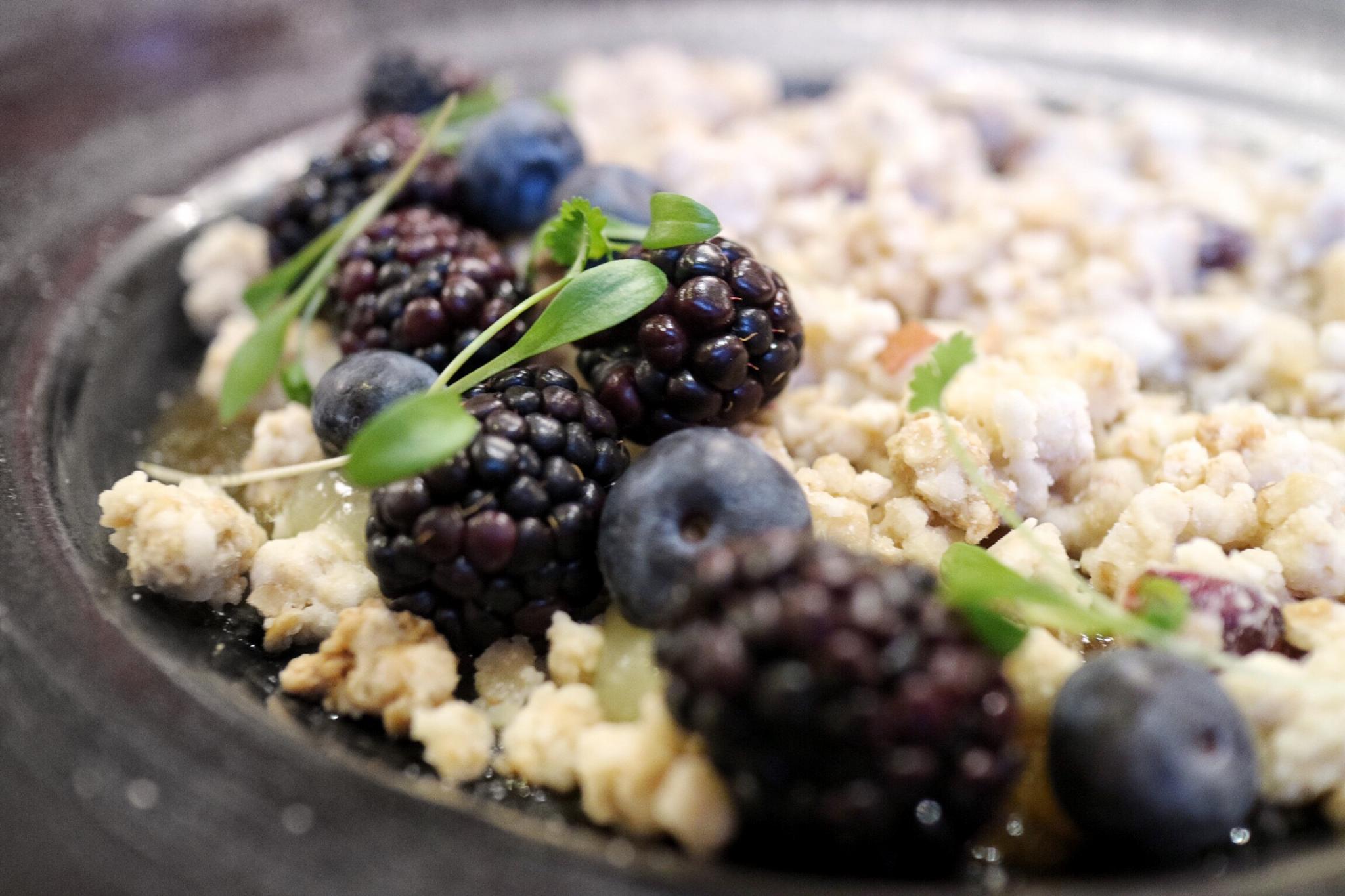 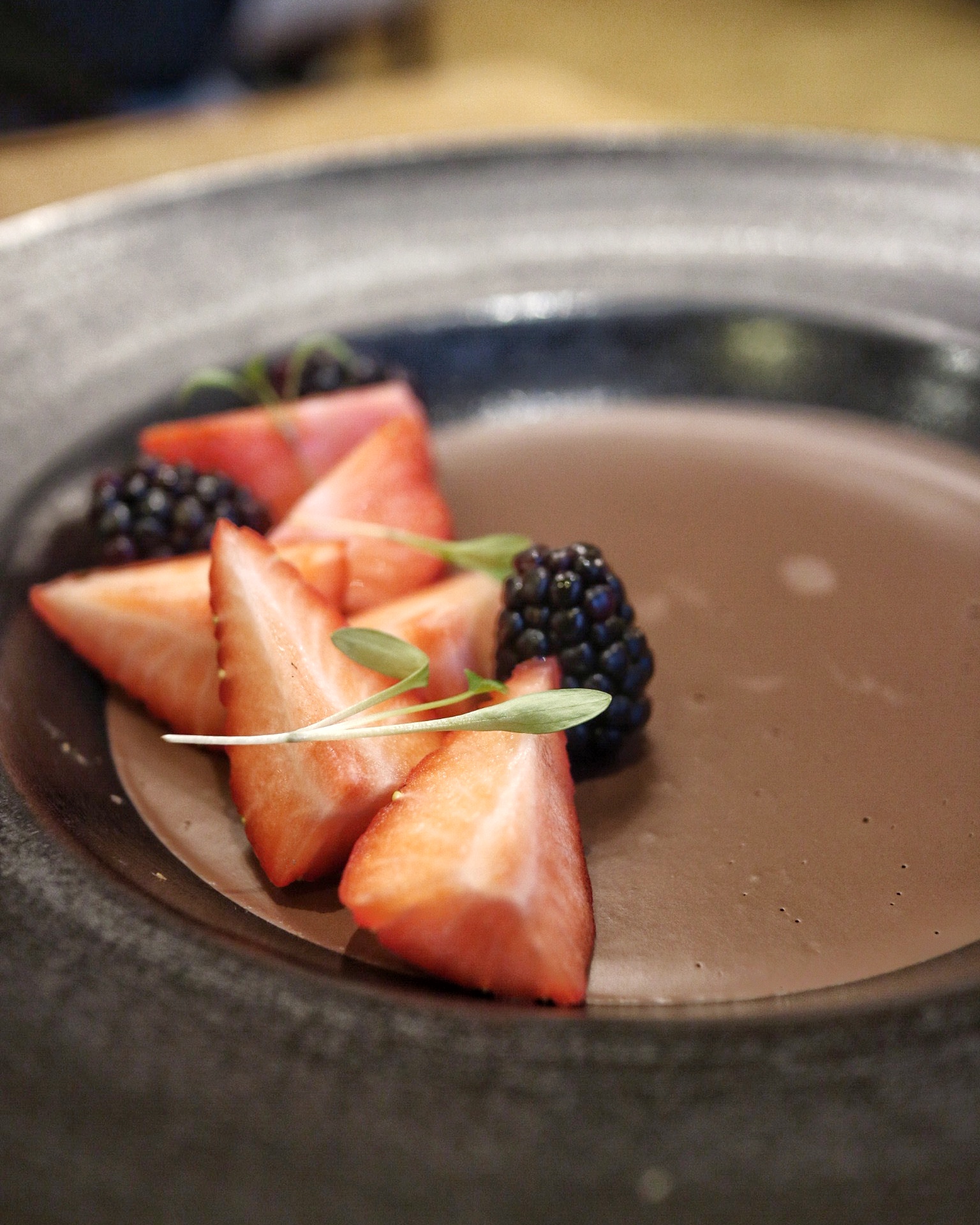 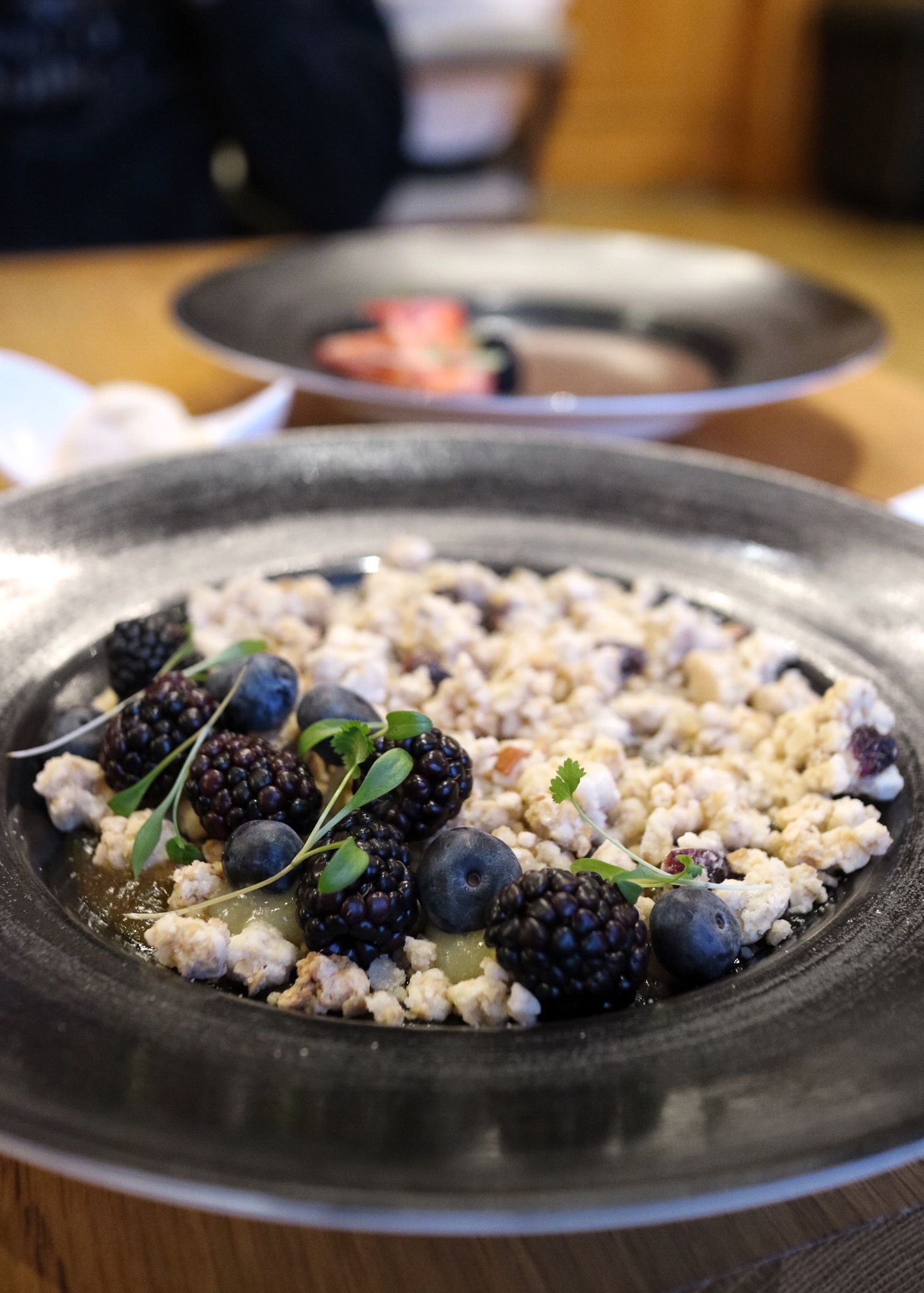 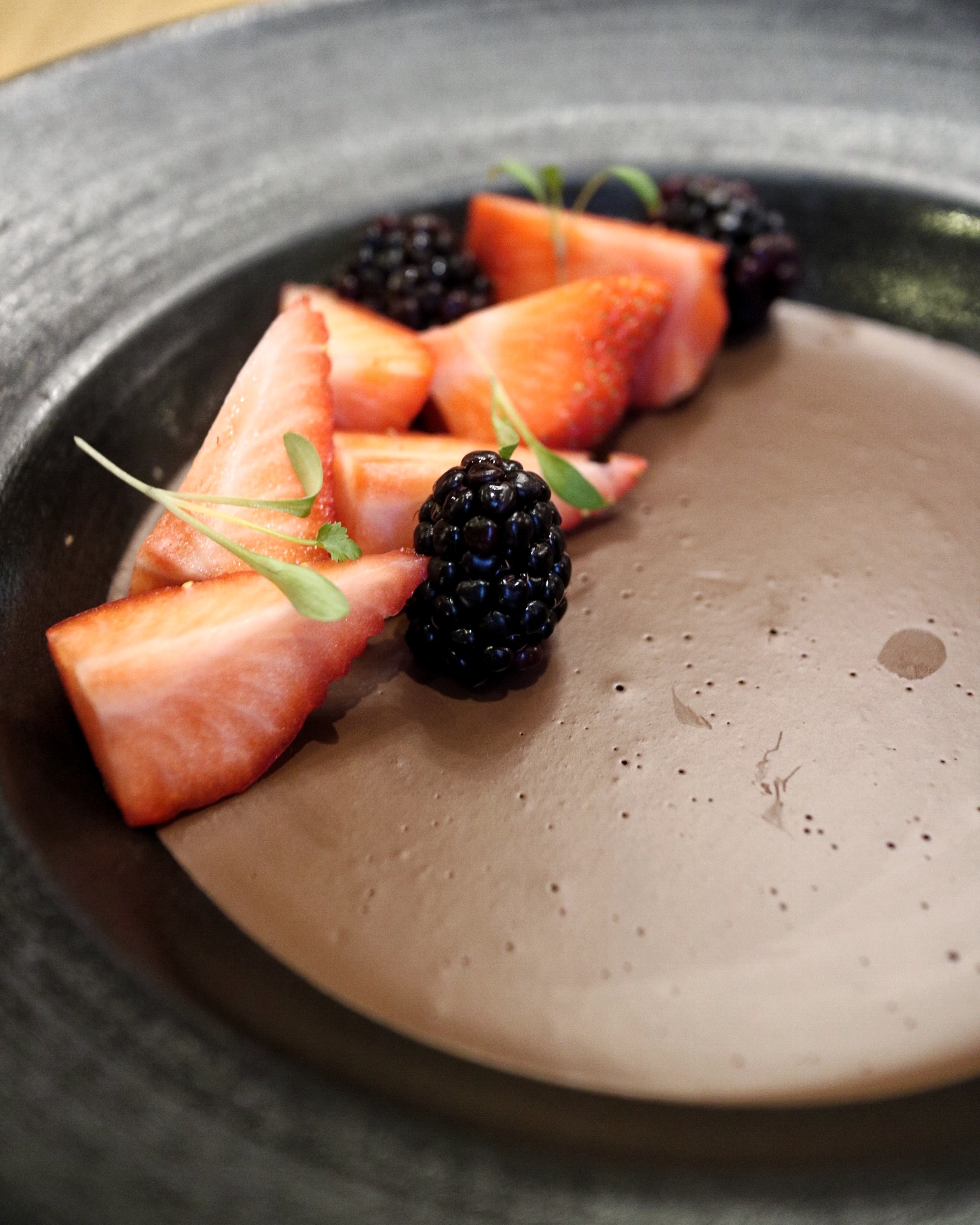 The dessert definitely lifted up our overall experience. We can’t see ourselves going here regularly, but this probably also has to do with us preferring modern, rustic cuisines over posh ones 😉

We found the portion sizes very confusing: one of the starters and one of the mains were literally tiny and not at all filling. If someone would happen to order these two, they would definitely leave hungry and not get their money’s worth.

So if you decide to try it out: Go for the Cauliflower Fritteres, Lentil Dahl and dessert of your choice 😉 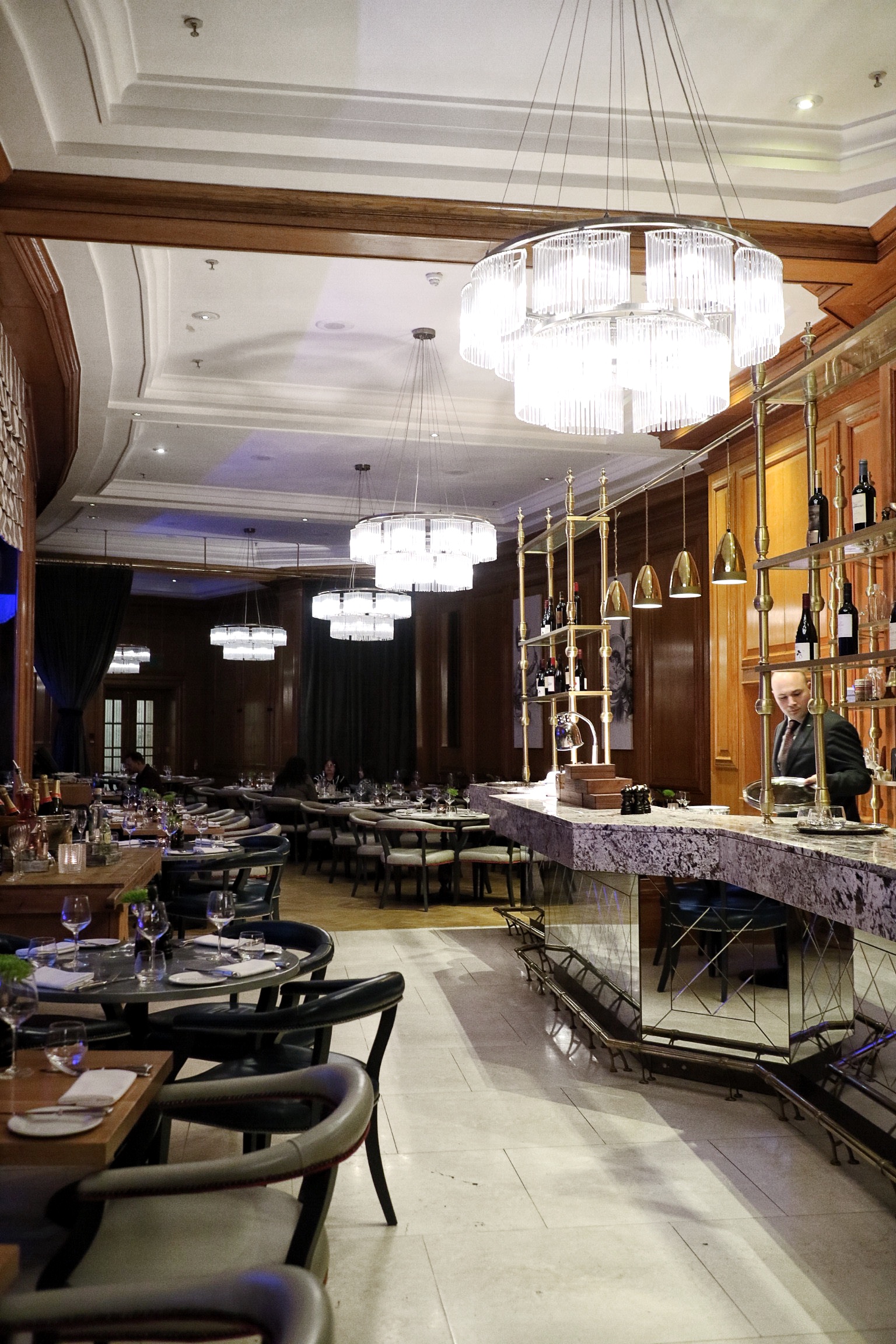