This recipe has been created in collaboration with Tate & Lyle.

Deliciously soft Vegan Apple Cinnamon Buns Recipe – wonderfully fluffy and sweet, the perfect treat to share with friends and family! Created with a yeast dough in a vegan brioche style.

Apple and Cinnamon – a combination that simply screams autumn! It’s one of my favourite flavour combinations to enjoy in the run up to Christmas, so it was a no-brainer that I turn a classical cinnamon bun into this deliciously sweet Vegan Apple Cinnamon Buns recipe! 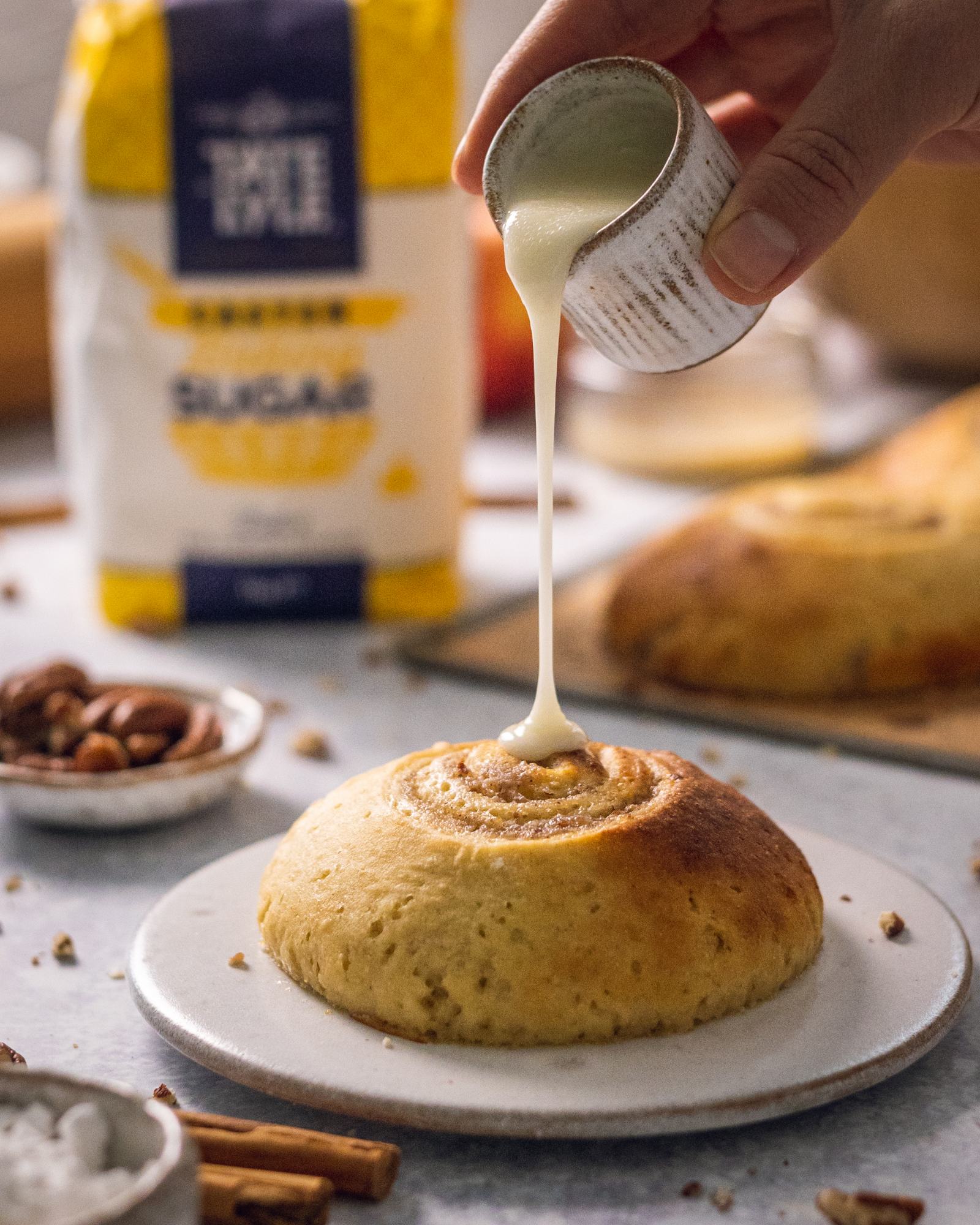 What you need for this Vegan Apple Cinnamon Buns recipe

How to create the buns

These Vegan Apple Cinnamon Buns are created with a yeasty vegan brioche style dough. Without eggs and milk a soft fluffy dough is not easy to create, however with a simple hack you can create a deliciously soft and fluffy rising vegan dough.

To get the right rise for this recipe, the dough uses dry active yeast alongside plain flour, a little sugar to activate the yeast, a little salt for flavour balance, plant milk & oil (I use rapeseed oil as it’s very flavour neutral).

How to make vegan brioche dough

The hack to creating the perfect dough for this recipe lies in the technique. As you will see in the ingredients list below, I’ve separated the plant milk, and flour into 2 portions each, one of which will be whisked up and slowly heated in a saucepan on the stove. This technique stems from Japanese cuisine and is called ‘Thangzhong’. It is often used in Japanese baking to get the perfect fluffy dough and it works perfectly for recipes such as these Vegan Apple Cinnamon Buns.

Once on the stove, the mix is heated and stirred until it begins to thicken. This should only take about 5-10 minutes. Once thick, remove from the heat. 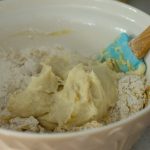 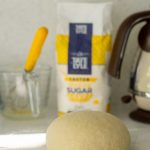 In a large mixing bowl, combine the rest of the dry ingredients: flour, sugar, yeast, salt. In a separate jug, combine the oil & plant milk aka your liquid ingredients. Make sure they are at a warm room temperature. Create a well in the large bowl, add in the thick sticky Thangzhong and pour the liquid ingredients on top, then combine everything with a wooden spoon.

Transfer to a floured surface and knead with your hands until the dough is smooth.

Place the dough back into a lightly greased mixing bowl, cover with cling film or a damp, clean kitchen towel and allow for the dough to rise in a warm place for 1 hour. This is the first rise for the dough.

Once the time elapses, knead the dough again with your hands for 1 minute, then use a floured rolling pin to carefully roll it out to roughly 1cm thickness.

We will add our filling (description below), shape our buns and then allow for them to rise another 45 minutes before baking. 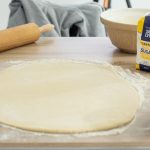 During the first rise I usually work on creating the filling for these buns. This is where the second portion of the caster sugar comes in. Peel and chop all of the apples and add them to a saucepan over medium heat alongside the cinnamon, sugar and water. Bring to a boil, then allow to simmer until the apples are softened.

Transfer to a blender and blend until smooth. Alternatively you can use a stick blender to create your apple & cinnamon paste. If it’s still a little water-y at this point, add it back to the saucepan over a low heat and allow for it to bubble away until it thickens, whilst stirring regularly. 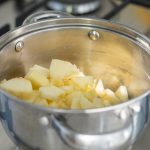 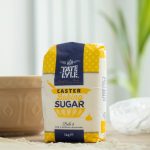 Shaping and baking the buns

Spread the apple cinnamon filling across the rolled out dough. For an extra crunch you can also add some crushed nuts, then gently cut the dough into strips using either a sharp knife or a pizza cutter (I always go for the pizza cutter option!). Cut them to about 2-3 cm thickness, then carefully roll up each strip into a bun and place your buns onto a baking sheet. If you don’t want them to stick together, leave at least a whole bun worth of space in between them.

Cover and allow them to rise for a further 45 minutes, then transfer to the oven and bake for 15-20 minutes or until golden. Allow for the buns to cool down slightly, then drizzle them with a little icing & enjoy! 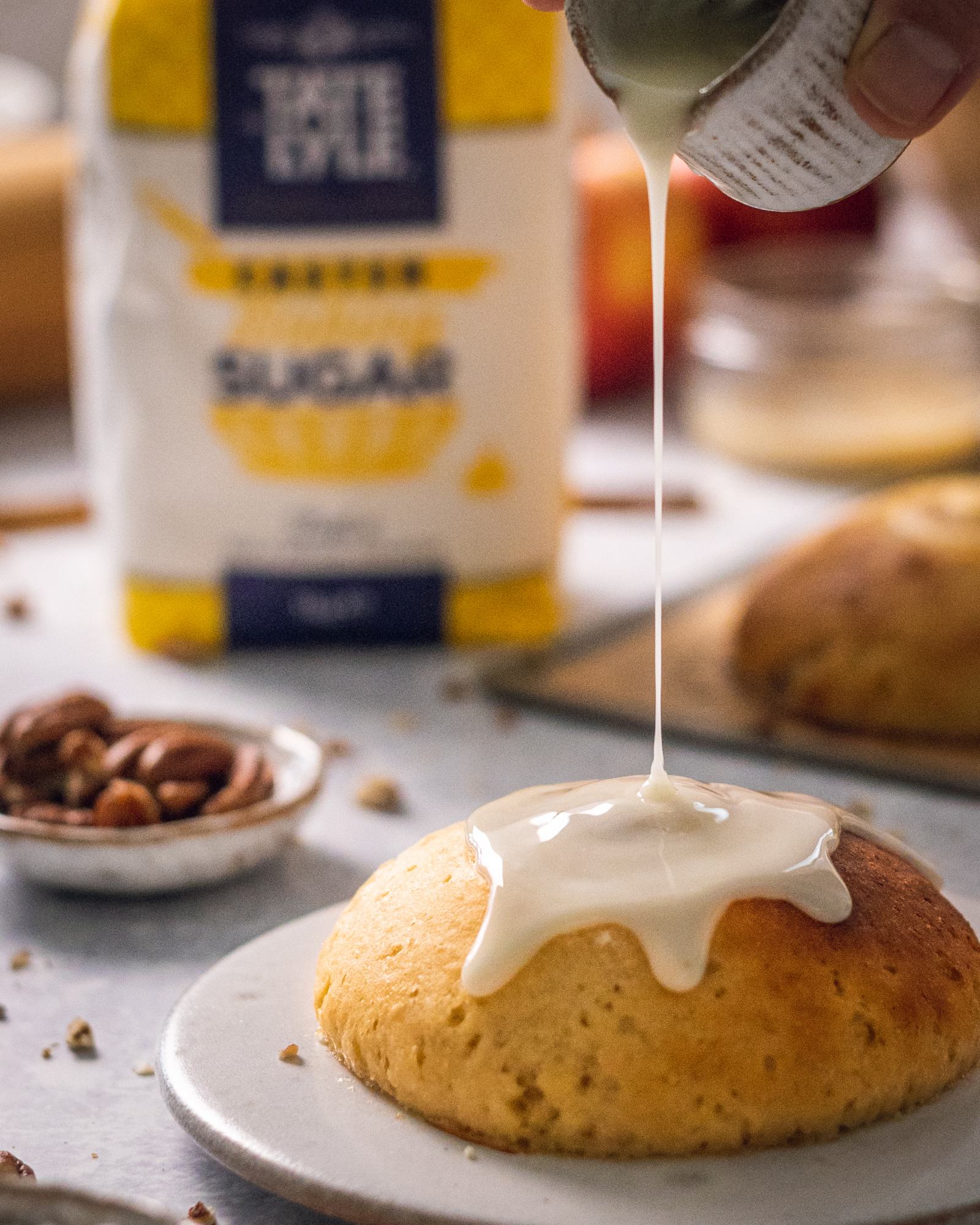 If you’re topping your buns with nuts, such as the pecans I’ve used on this occasion, they taste best toasted. Simply pop them in your oven at 160C for a few minutes. Stay close by as they can easily burn! Alternatively you can also toast them on the stove in a non-stick frying pan over low/medium heat.

Alternatively to rapeseed oil you can also use melted extra virgin coconut oil.

If you want your buns to be nice and shiny, you can brush them with a vegan ‘egg’ wash made from 1 part maple syrup, 1 part plant milk.

For an extra crunch, add some chopped nuts onto your apple cinnamon paste!

Looking for more vegan bakes? Why not give these a go: