I’ve been so excited to try out this new Big Vegan Cheese Making Kit – after all vegan cheese is one of my favourite things to consume.

Probably one of the things I hear most is ‘I wish I could go vegan, but cheese’- and let’s be real here: that used to be me. Before I became vegan, I put cheese on and in literally everything and it was a staple part in my diet and I would lie if I’d say it was easy to give it up.

After going vegan I focused very much on not using any cheese replacements, but instead tried out more diverse cuisines, which naturally did not include any cheese or substitutes. For me this was the easier route to go down back then, as the vegan cheese options were terrible in early 2014 – this way I simply changed my habits, instead of settling for a mediocre replacement.

Since then so much has changed however, there have been more and more options for delicious vegan cheese of all kinds popping up on the market. But one thing they have all in common: They are pretty pricey. They are definitely worth it, I can tell you – but vegan cheese becomes a very special treat when you’re on a small budget. 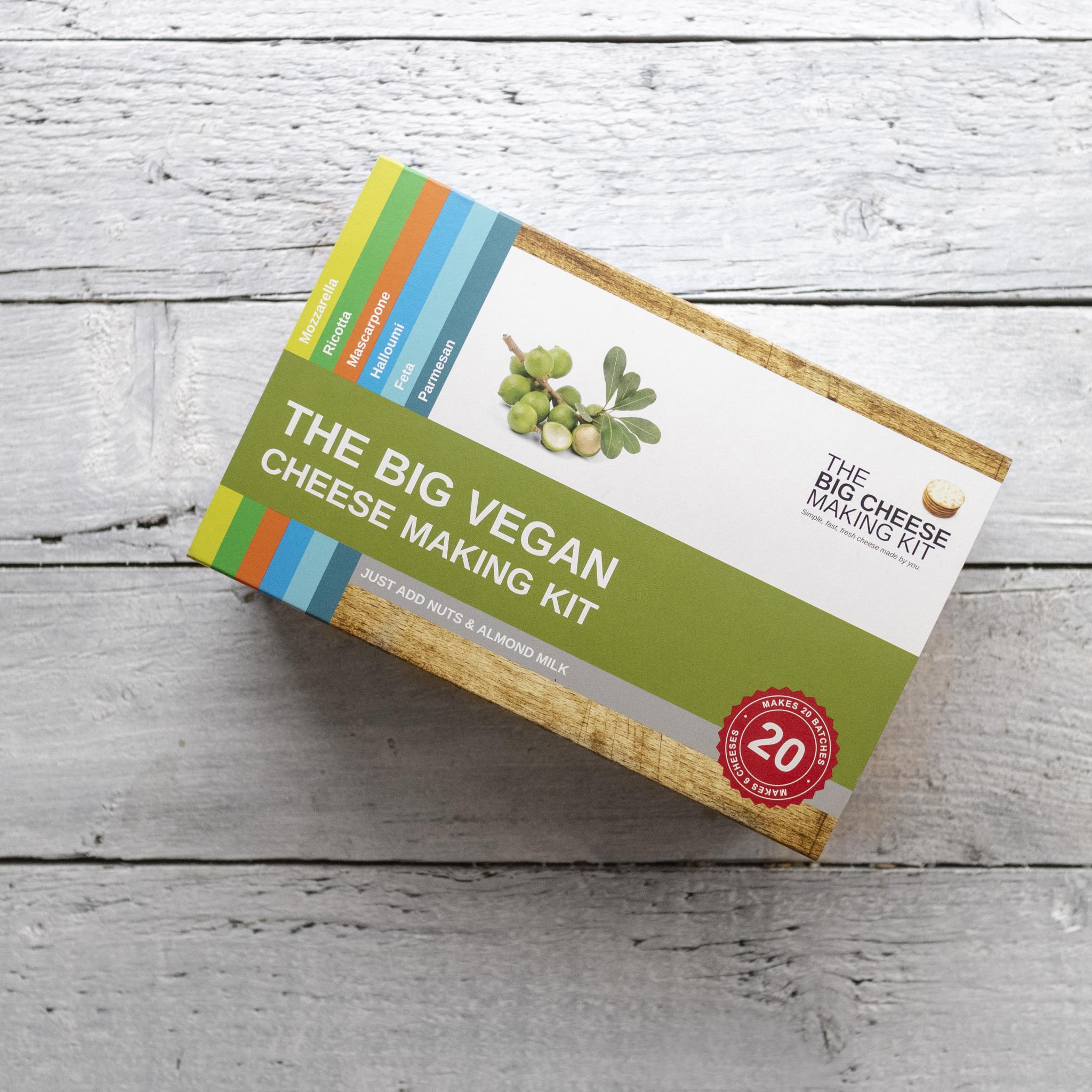 It comes fully equipped with all those ‘special’ ingredients that you need to make your own vegan cheese at home as well as a thermometer – and also includes fool proof simple recipes for everything from Mozzarella, to Halloumi and Ricotta. I can imagine this being a perfect Christmas gift for a vegan friend – or simply one of those people who ‘live mostly vegan, but cheese’, ha! 😉

One of the cheeses I was certain to try out first, was the Mozzarella – something I have not really found an good replacement for. There seem to be loads of ‘melty’ versions that taste similar to Mozzarella, but I’ve not had one in the actual shape and texture that I automatically connect with this type of cheese. The Cheese Making Kit promised all this, so I couldn’t wait to try it out for myself. In addition I also made the vegan Halloumi – a cheese I haven’t had for years (and also haven’t found a suitable replacement for yet!)

The included cheese recipes are super simple to create – all you need is a blender and a stove top, as well as adding almond milk and the nuts required for each recipe. Both Mozzarella and Halloumi are using cashews (100g each!) that I soaked prior. Ideally you would soak them for at least 4-6 hours or overnight, but if it has to be quick, you can also cook them in boiling water for about 20 minutes to soften them.

All ingredients are then blended together until smooth and the paste is then added to a non-stick pan over medium heat and heated up to 60 degrees C – this is where the thermometer that comes with the set comes in! You will need to constantly stir the paste as it thickens with increasing heat, otherwise it could burn and stick to the pan. 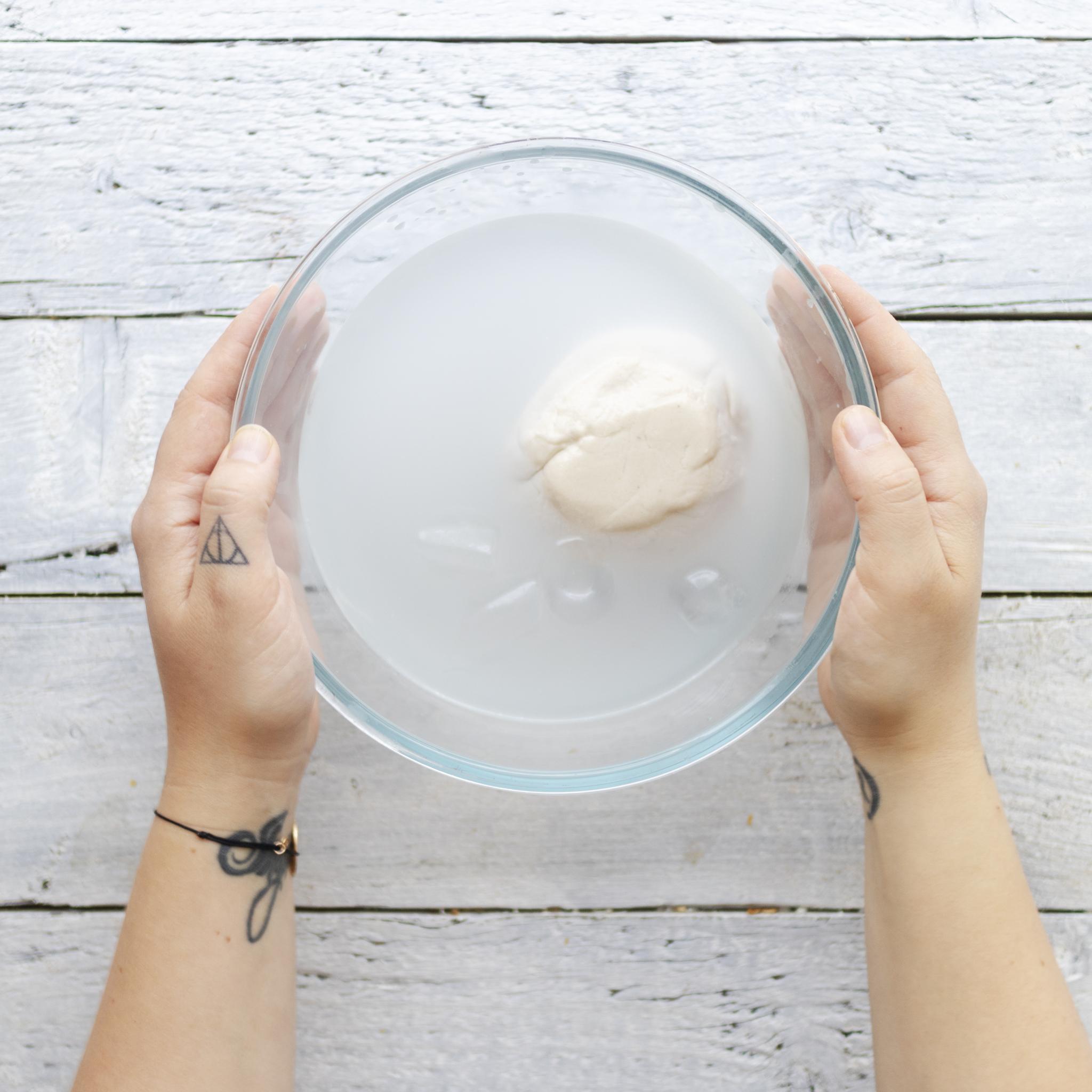 For the mozzarella I prepared a bowl of ice water and formed a ball of mozzarella as soon as it cooled down enough to handle, then dropped into the ice water to firm up. According to the instructions, the mozzarella is best used right away, but can be kept in an airtight container in the fridge for up to 3 days.

The Halloumi recipe called for it to be transferred to a small square Tupperware and left in the fridge to firm up over night. It would then get the typical Halloumi shape and can also be sliced.

The Vegan Mozzarella turned out to be a perfect addition to vegan pizza. After a night in the fridge it actually got a little softer than it was right after making it – next time I’d definitely use it right away, instead of leaving it over night. It was perfectly smooth and gooey however and definitely made for some delicious vegan pitta pizzas (yes with vegan pesto base, a recent obsession of mine!) 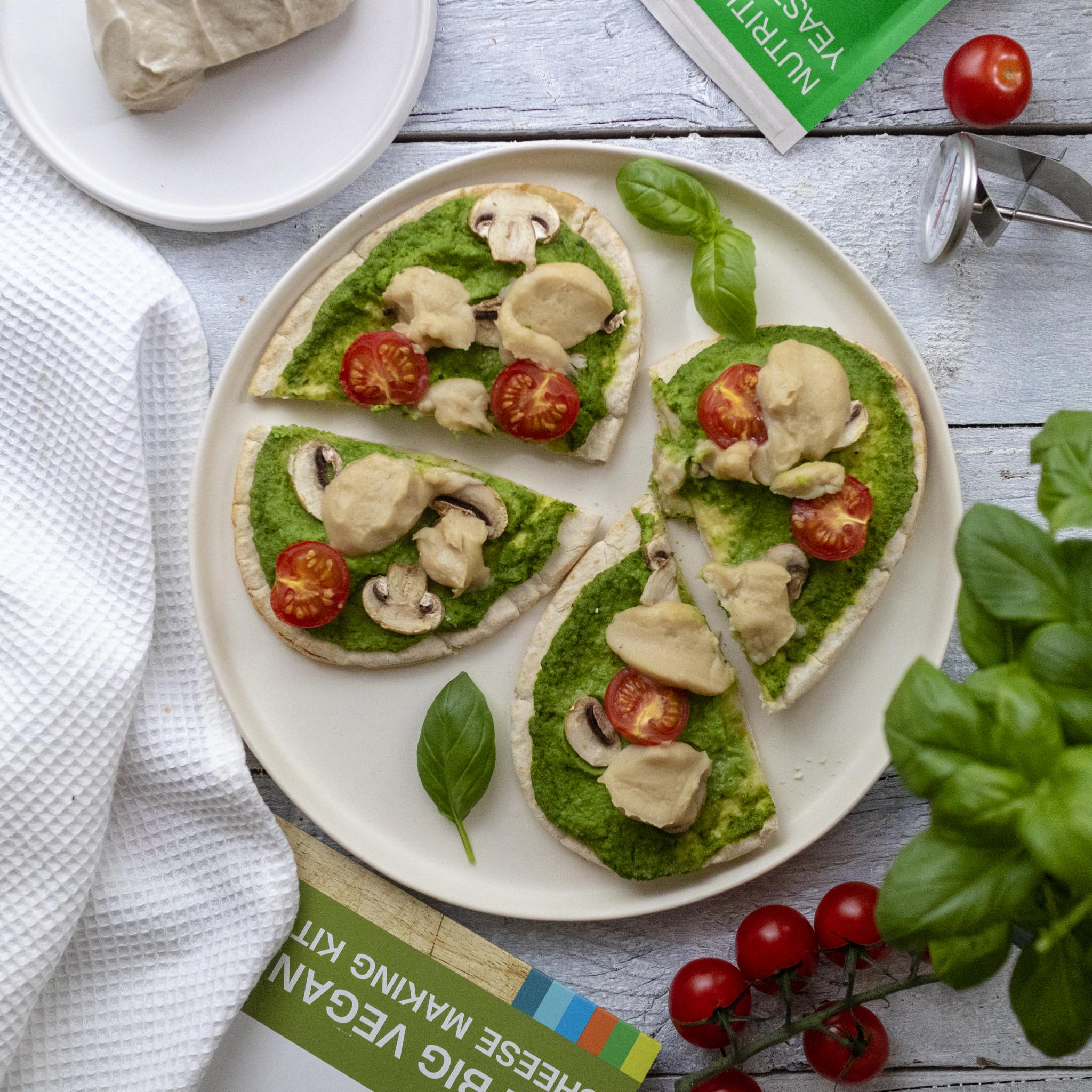 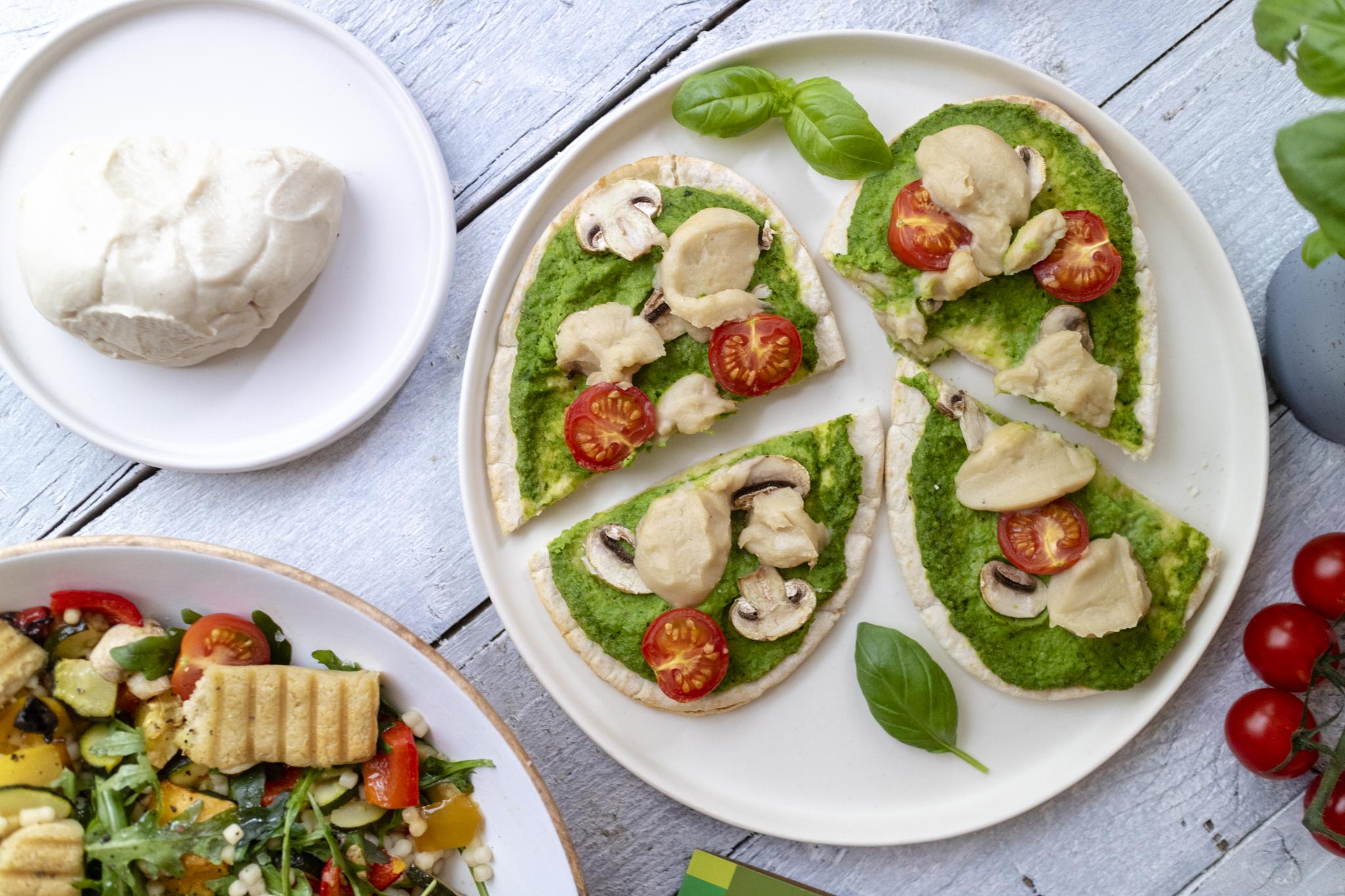 For the Halloumi I literally went all out! It’s after all not the kind of cheese to melt over anything or add into a recipe, but is more likely the staple piece of a dish, so decided to make a warm, roasted veggie salad – complete with rocket, giant couscous and cherry tomatoes, oh and course the grilled Halloumi on the top 😉 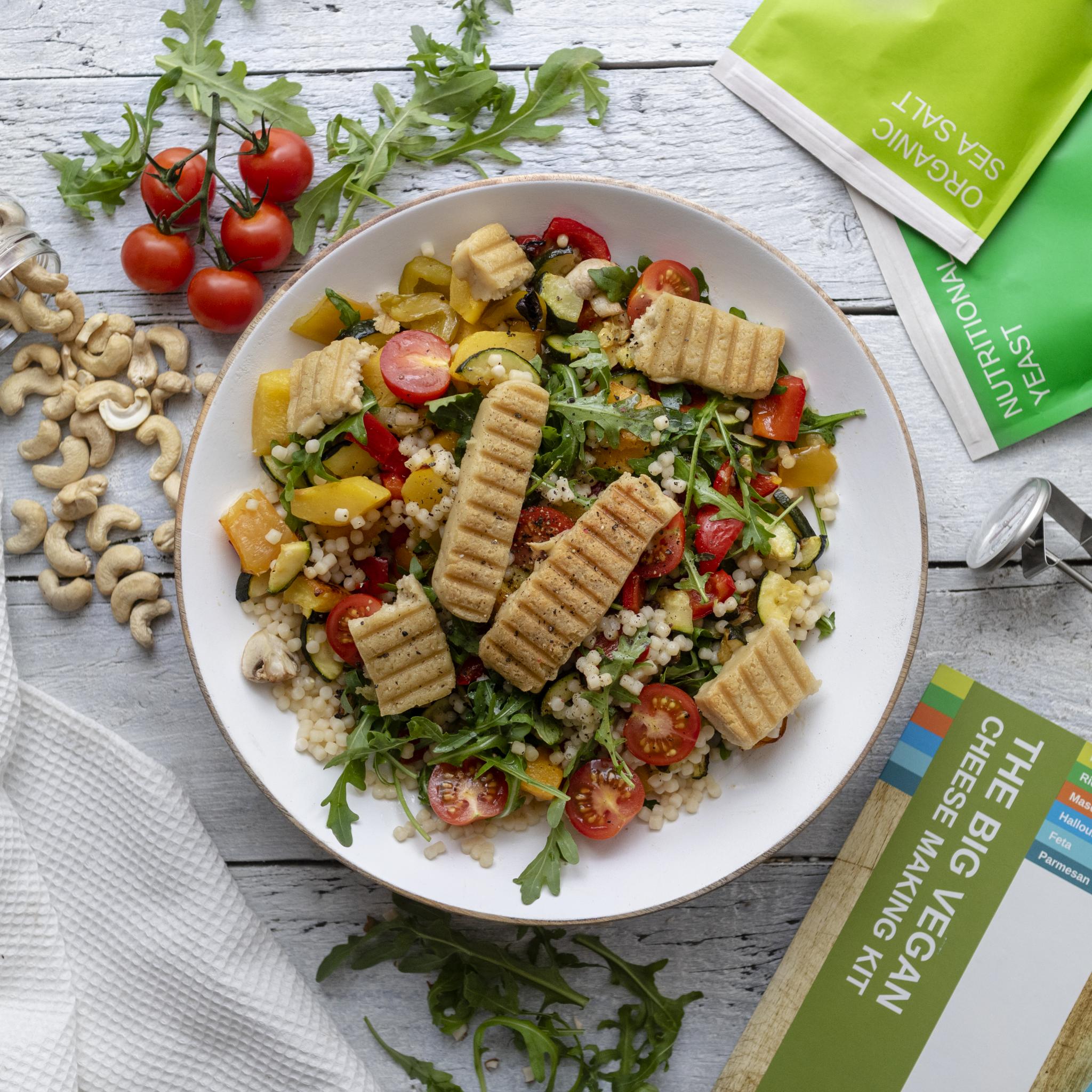 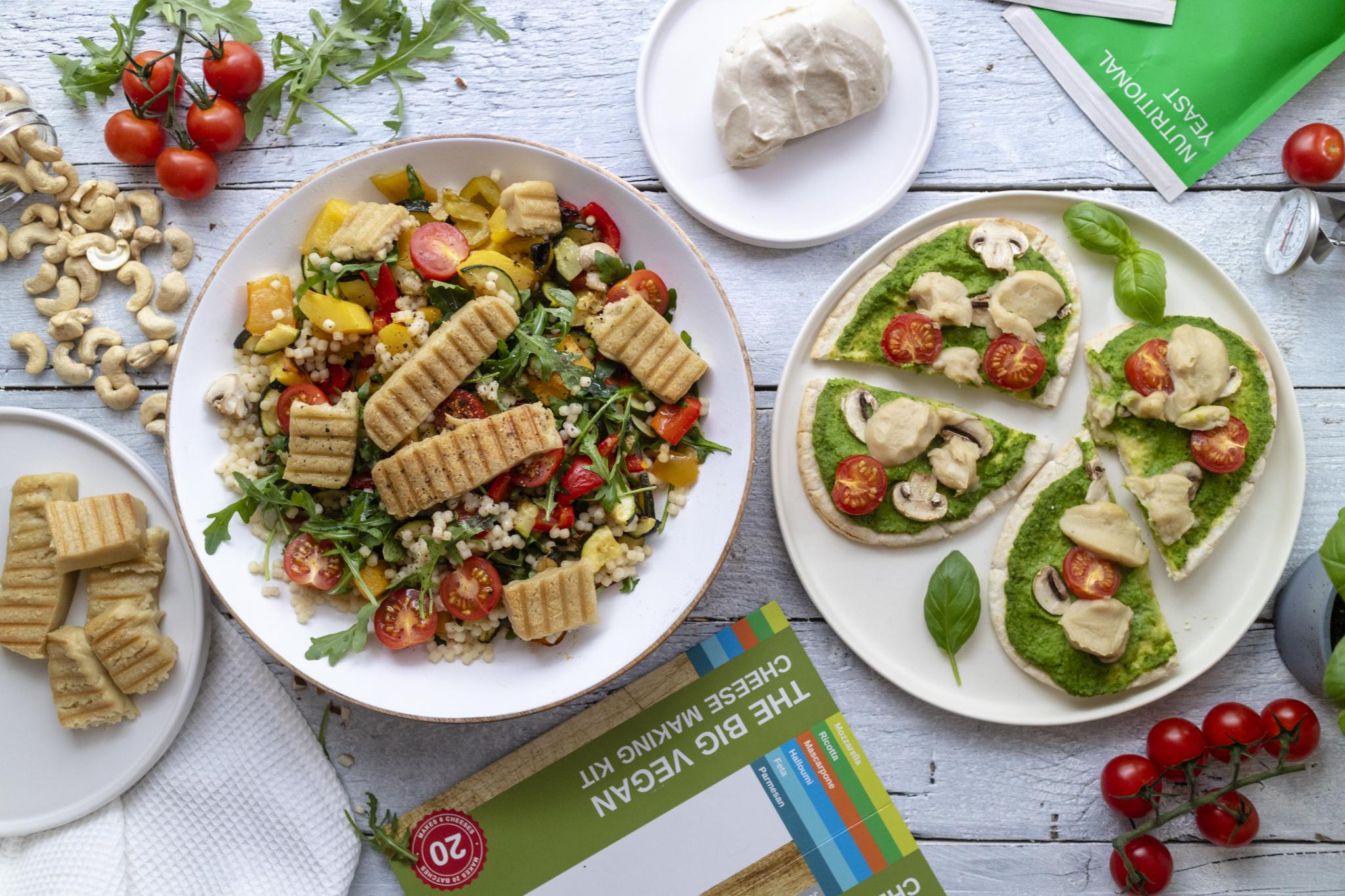 Top Tip: If you’re feeling nutty, some toasted walnuts or pecans would go just perfectly with this couscous bowl!

I hope you’ve found this recipe and The Big Vegan Cheese Making Kit Review helpful! I’d love to find out what you thought of it and which recipe you’ve tested out – feel free to message me on Instagram @romylondonuk. 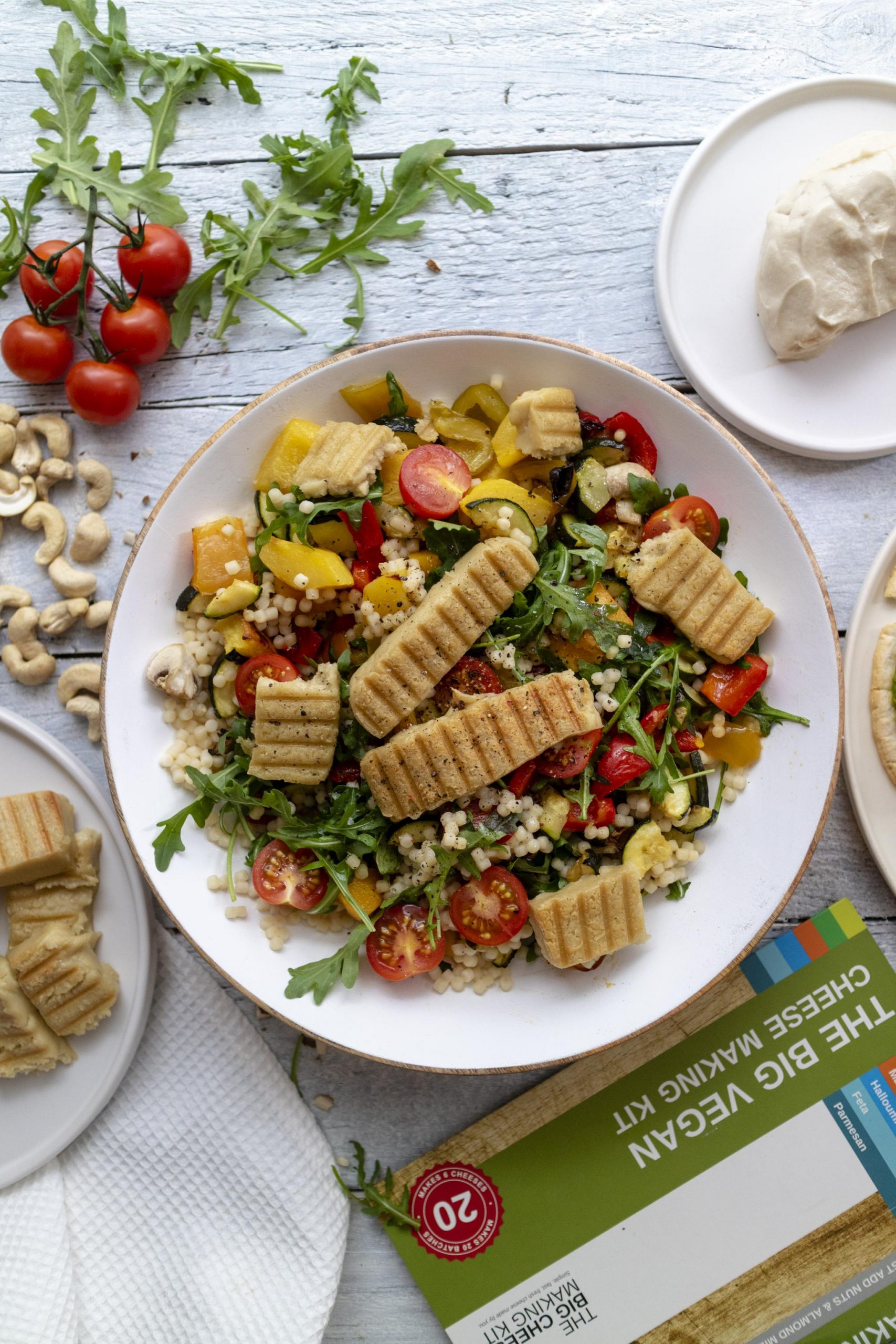 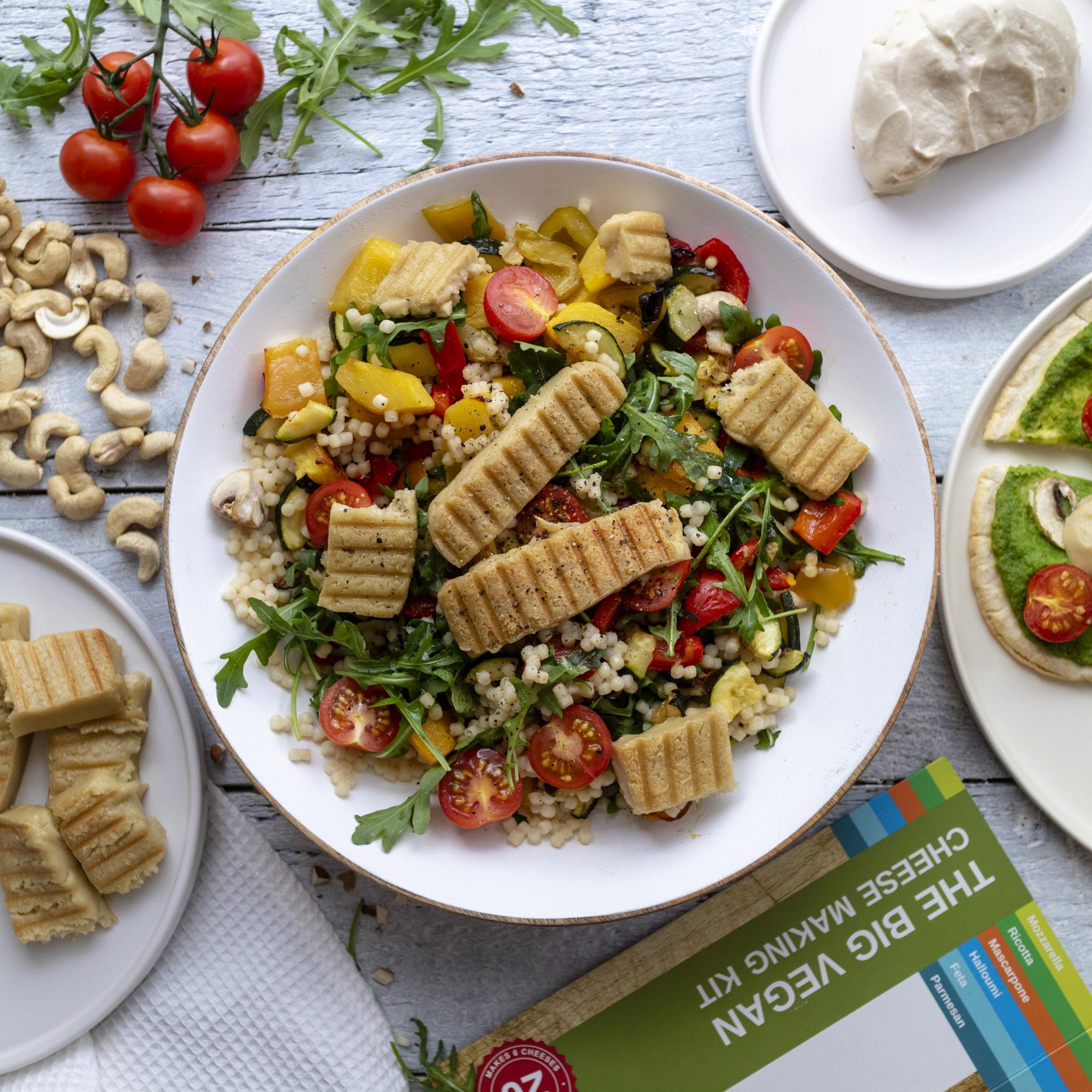 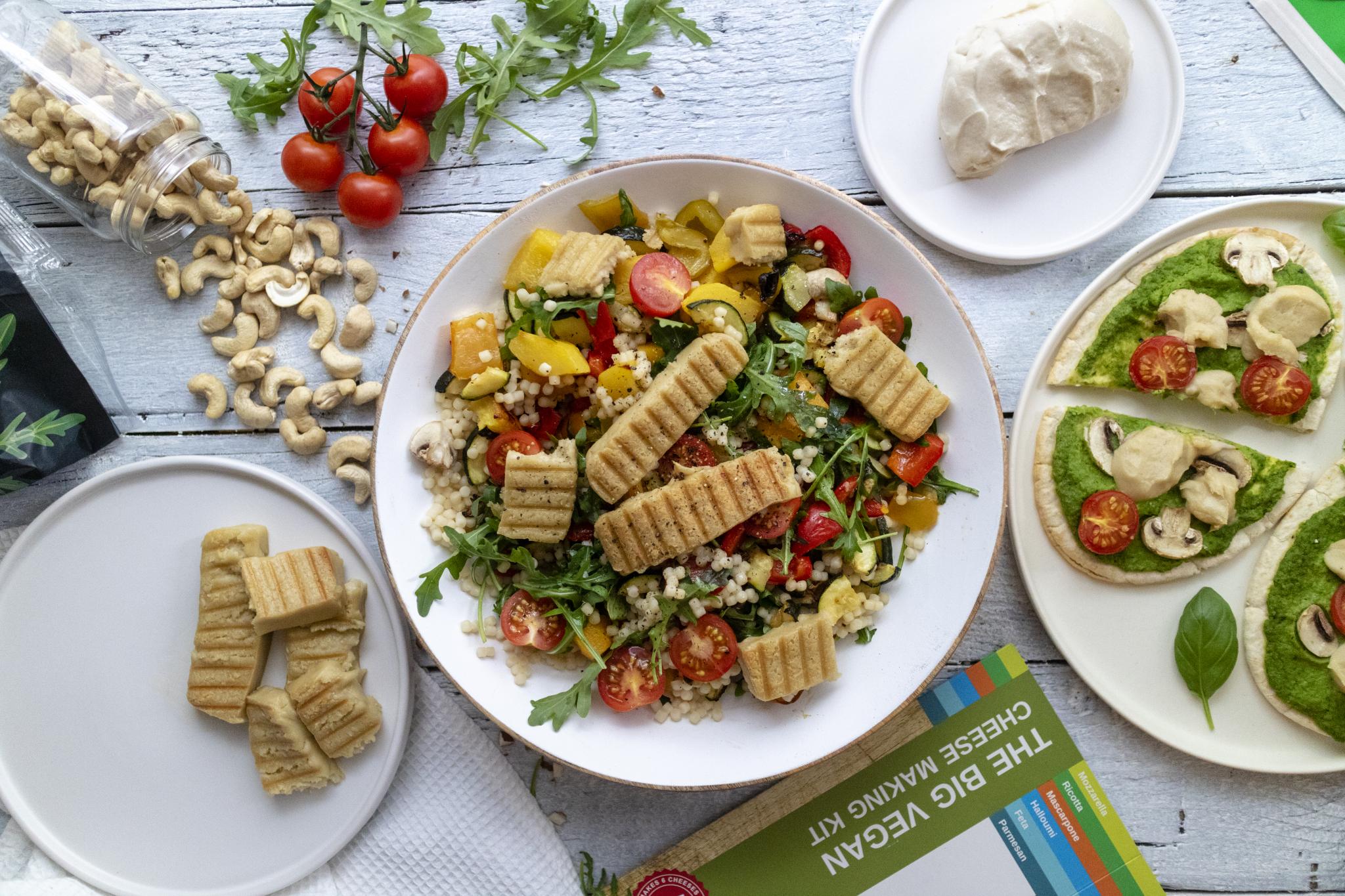 In friendly collaboration with The Big Vegan Cheese Making Kit.