Interestingly it was none other than John Lewis that recently made me aware of the Stir-Up Sunday tradition.

Upon inspection it seemed however, that I am not the only one that was not aware of this traditional day, so let me give a quick explanation by John Lewis of what Stir-Up Sunday is about:

“Stir-up Sunday is a centuries-old annual tradition where home cooks spend the last Sunday before Advent ‘stirring up’ their Christmas pudding. Always landing at the end of November, it’s an opportunity to spend a day getting festive in the kitchen, preparing for the imminent feast. In years since, keen cooks have not only used the occasion to make the pudding, but a whole host of other stashable Yuletide classics, too, notably Christmas cake and the mincemeat for mince pies”

With the Stir-Up Sunday in mind John Lewis had invited me to a Christmas themed event at their cookery school near Finchley Road – and I was already excited as soon as I got the invitation! I honestly had no idea that John Lewis/Waitrose had their own cookery school which is also open to the public for cookery classes.

And what could be more traditional than learning how to make Christmas pudding for this Stir-Up Sunday event? Luckily the lovely people behind John Lewis had invited a few fellow bloggers to the event (I’m looking at you Vegan Nigerian, Worldwithinher, Happyskinkitchen, Louisa Christie & Precious Vegan) and we were all divided into smaller teams to create our Christmas puddings. Marsha and me partnered up at the vegan cooking station to create our very first Christmas puddings. Let’s say – all fingers were crossed that we would create something edible and we actually did! (convince yourself below!)

The evening was rounded up with a cocktail making class and an amazing vegan & gluten-free sit-down dinner – which was just a ‘light snack’ according to the John Lewis team but managed to fill everyone up completely , and ohhh boy it was delicious! I hadn’t expected to celebrate a full-on Christmas to early – but as you know me, I’m an absolute sucker for everything Christmas-themed. I loved the evening so much & was happy to find out that I’m not the only one starting their celebrations early (and annoying about 90% of the rest of the population with it) – and yes, my Christmas tree has already been up and decorated since mid November! 😉

I have never had a non-vegan Christmas pudding before, so I cannot give any judgement as to how it compares, but this one turned out utterly scrumptious!

Please feel free to try making you own at home – with John Lewis’ vegan Christmas pudding recipe below.

1. Preheat the oven to 180 C, gas mark 4. Grease 4 mini pudding basins and 4
small circles of baking parchment with the soya spread and set aside. Mix the
flaxseed with 3 tablespoons cold water and set aside for at least ten minutes or
until it becomes jelly-like and makes ‘flax-egg’.

2. Sift the self-raising flour, baking powder, salt, nutmeg, cinnamon and cloves into
a medium mixing bowl, then add the “flax-egg”and the melted coconut oil. Mix
the treacle with the stout and rum in a measuring jug. Pour this mixture into the
bowl and whisk everything together thoroughly. Stir in the lemon zest, apple,
almonds, currants, peel, cherries and mincemeat.

3. Divide the mixture between the prepared basins and top each one with a circle
of greased parchment. Wrap each basin in an 18cm square of foil and fold
under the edges of the basins.

4. Place the basins into a roasting tin and pour in enough boiling water to come
2.5cm up the sides of the basins. Carefully place the tin in the oven and bake for
45-50 minutes, or until the puddings are springy and firm to the touch in the
centre. Remove from the oven, unwrap, remove the parchment and leave to
stand for 10 minutes. Carefully run a small knife around each one and turn out
onto warm serving plates. 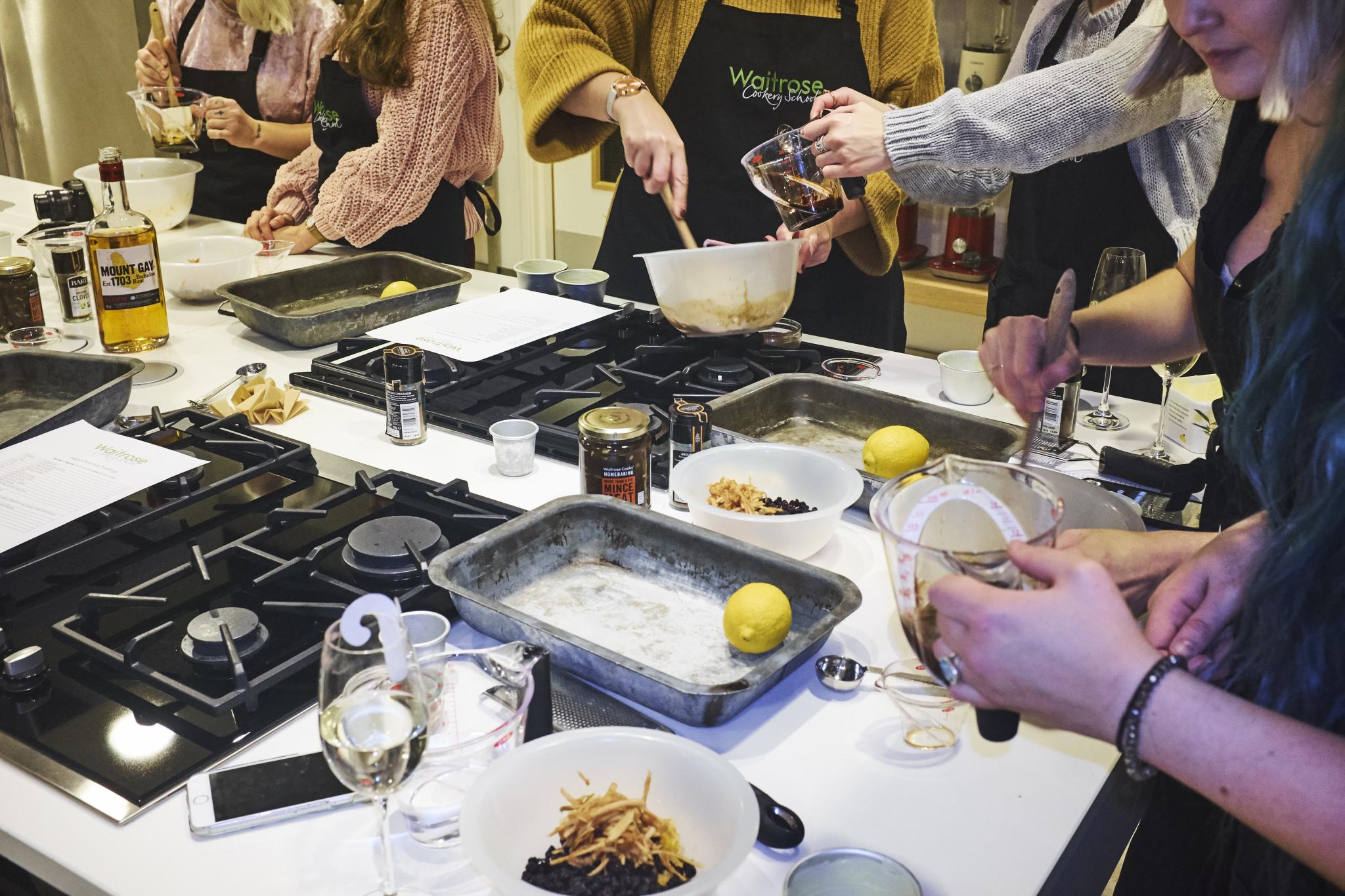 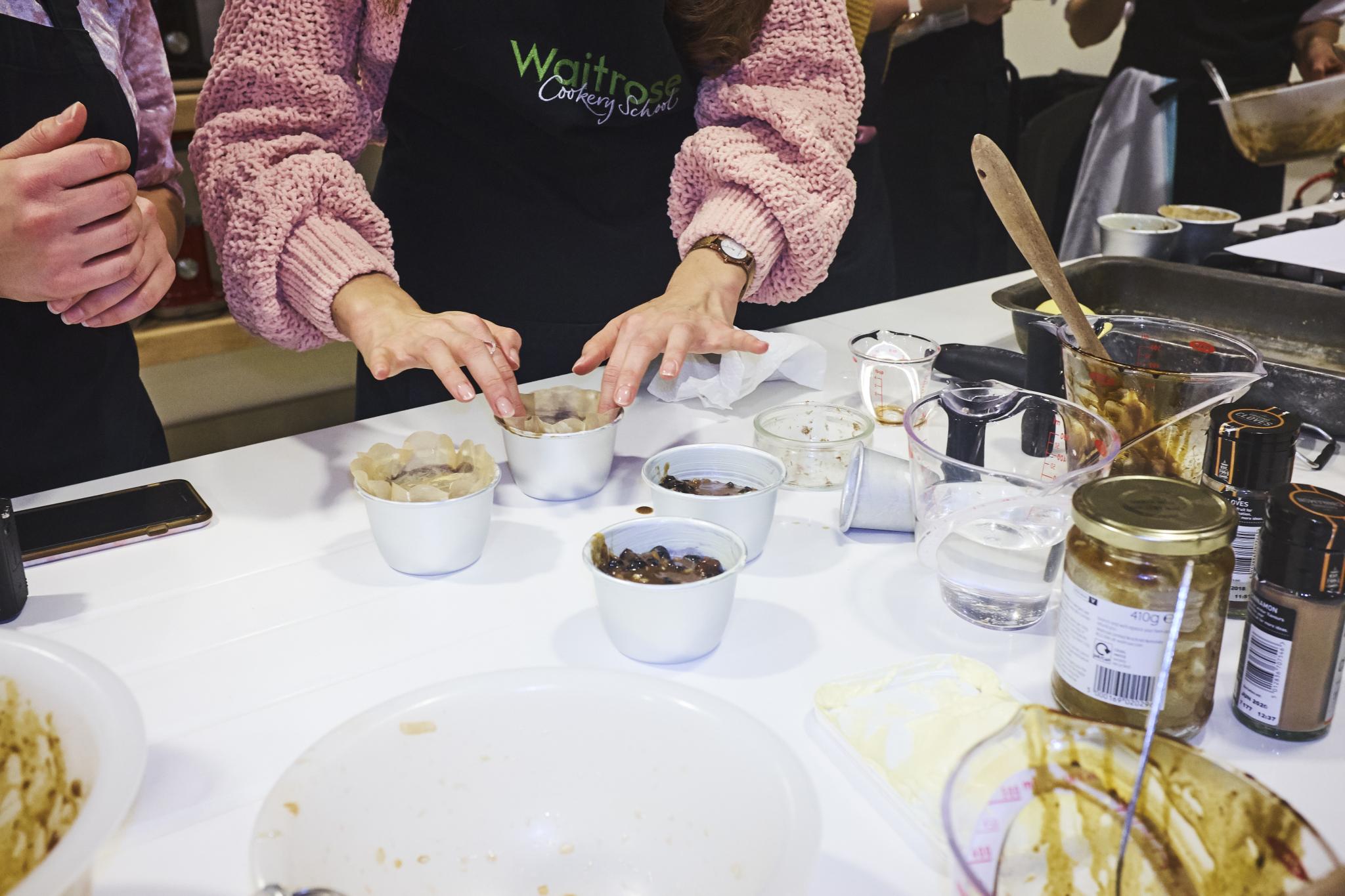 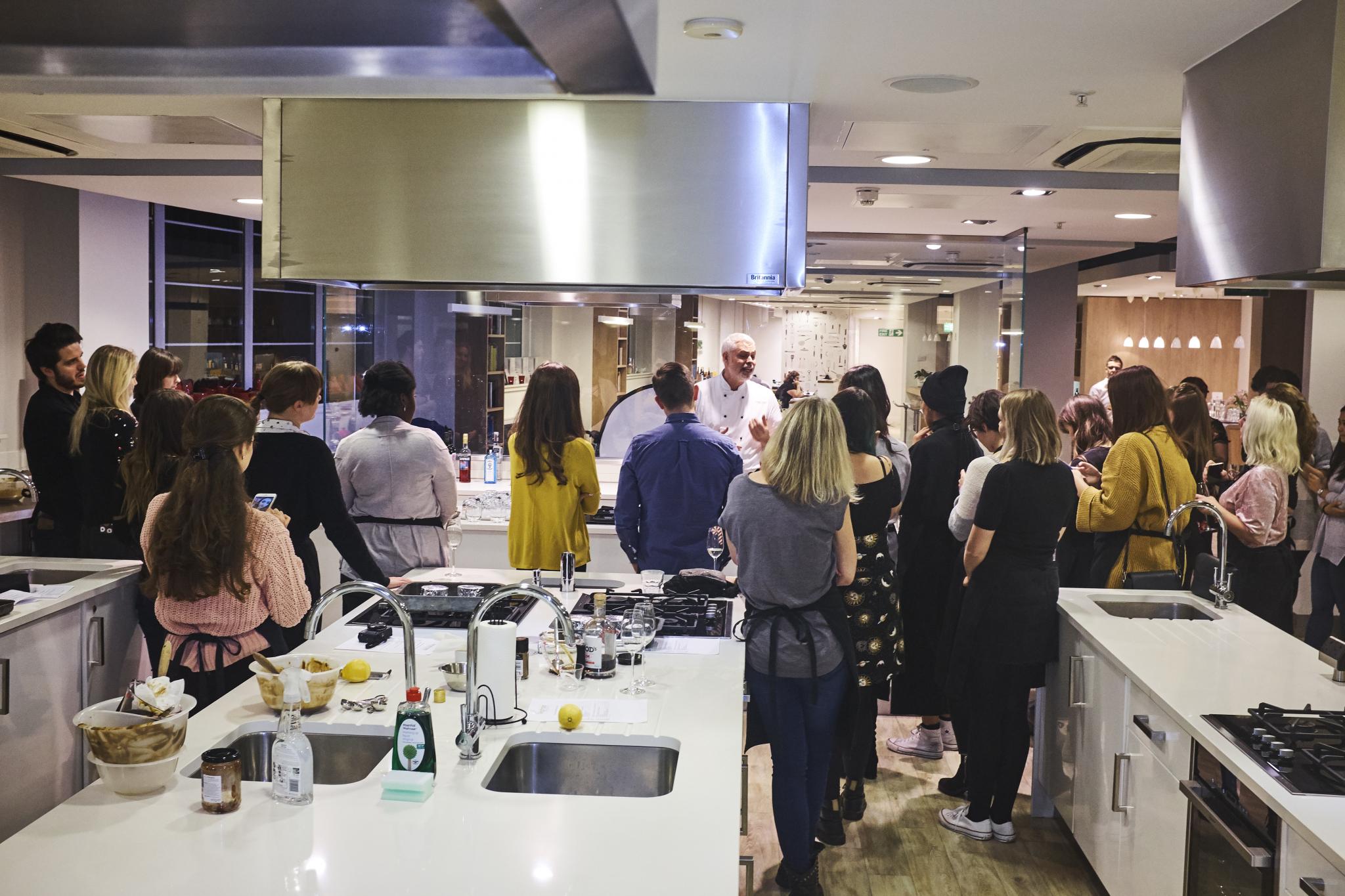 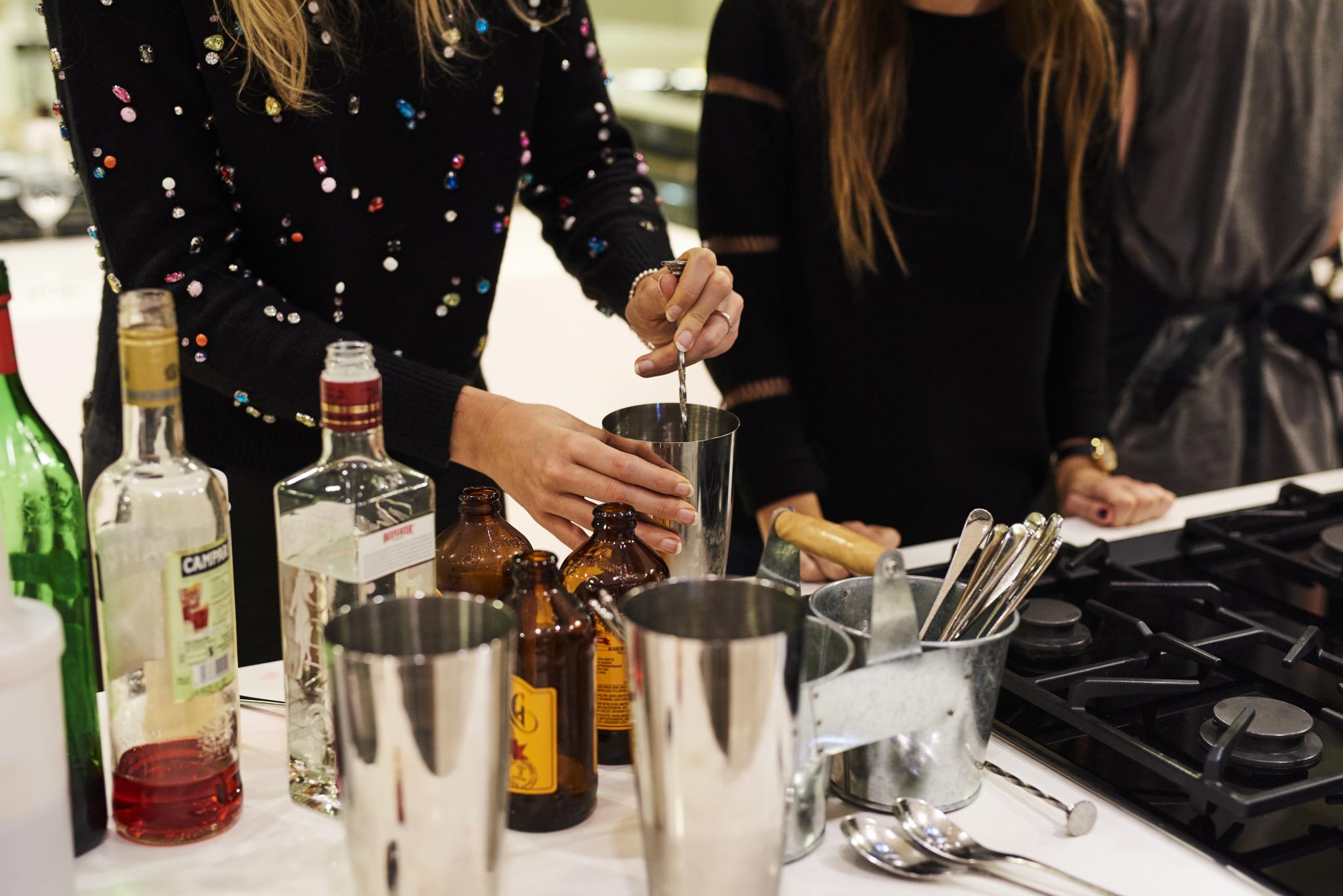 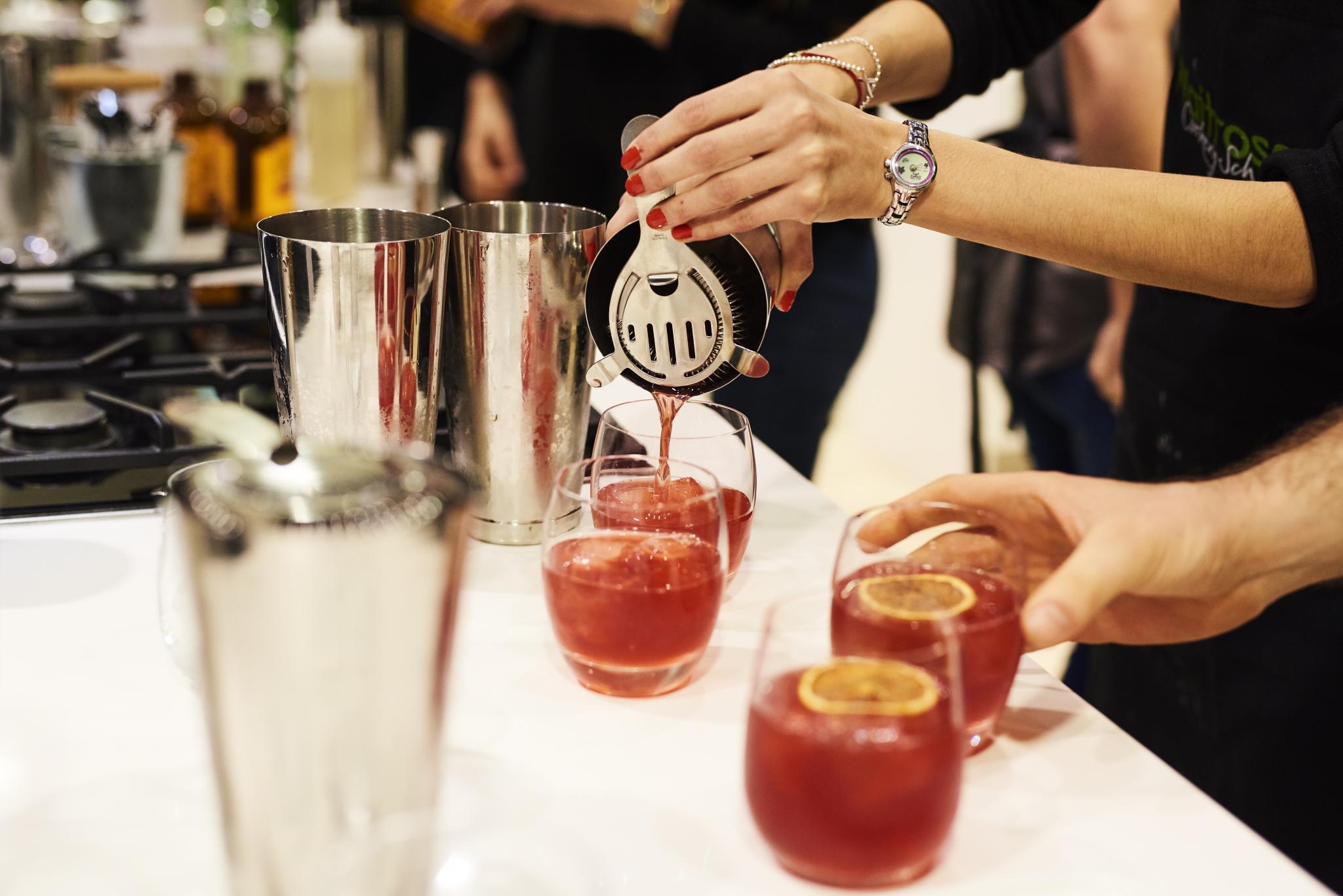 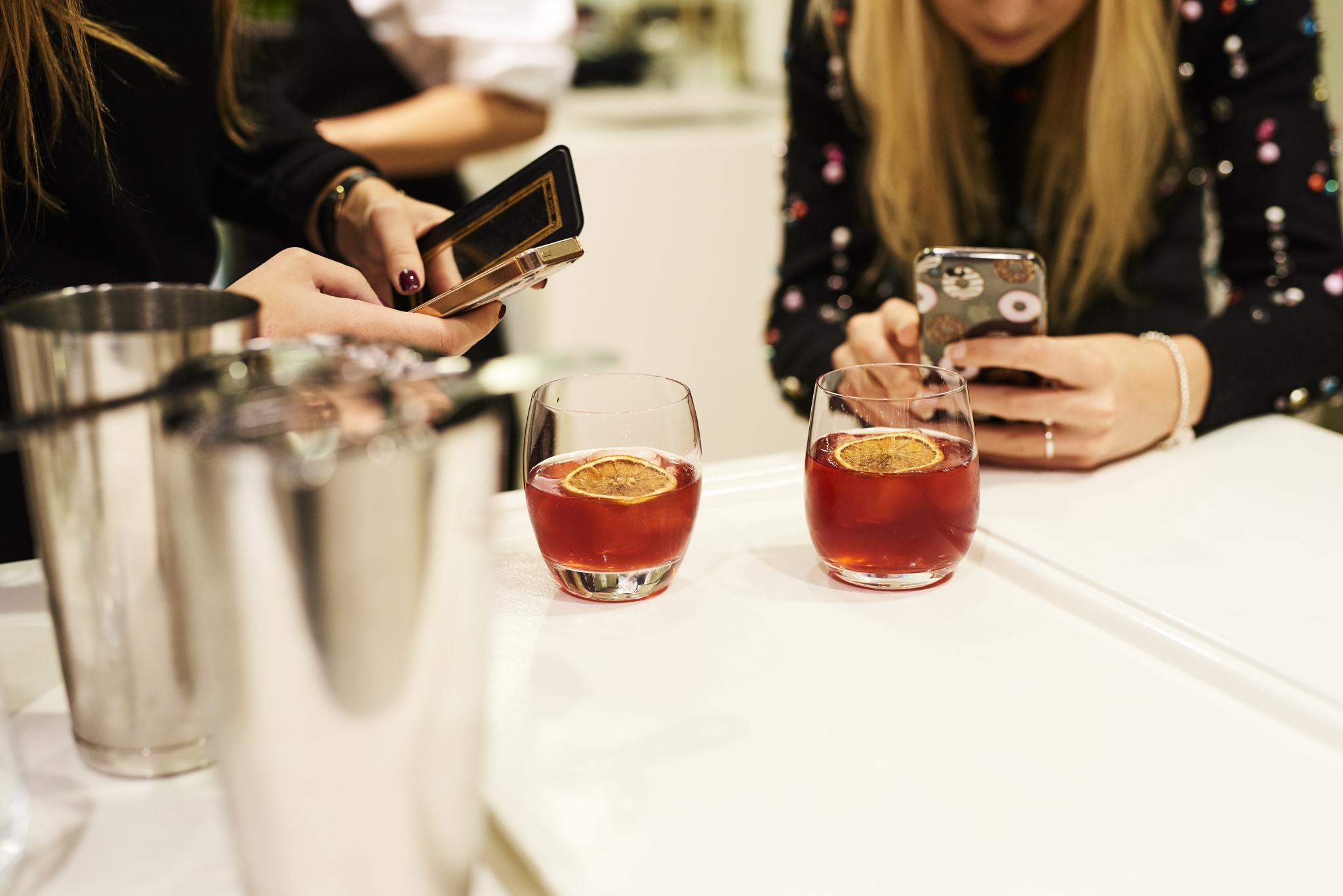 It was an all in all amazing evening and I am very grateful to have been invited. To many more vegan Christmas puddings in the future!

And to give you a little insight on what a blogger event looks like ‘behind the scenes’: 😉 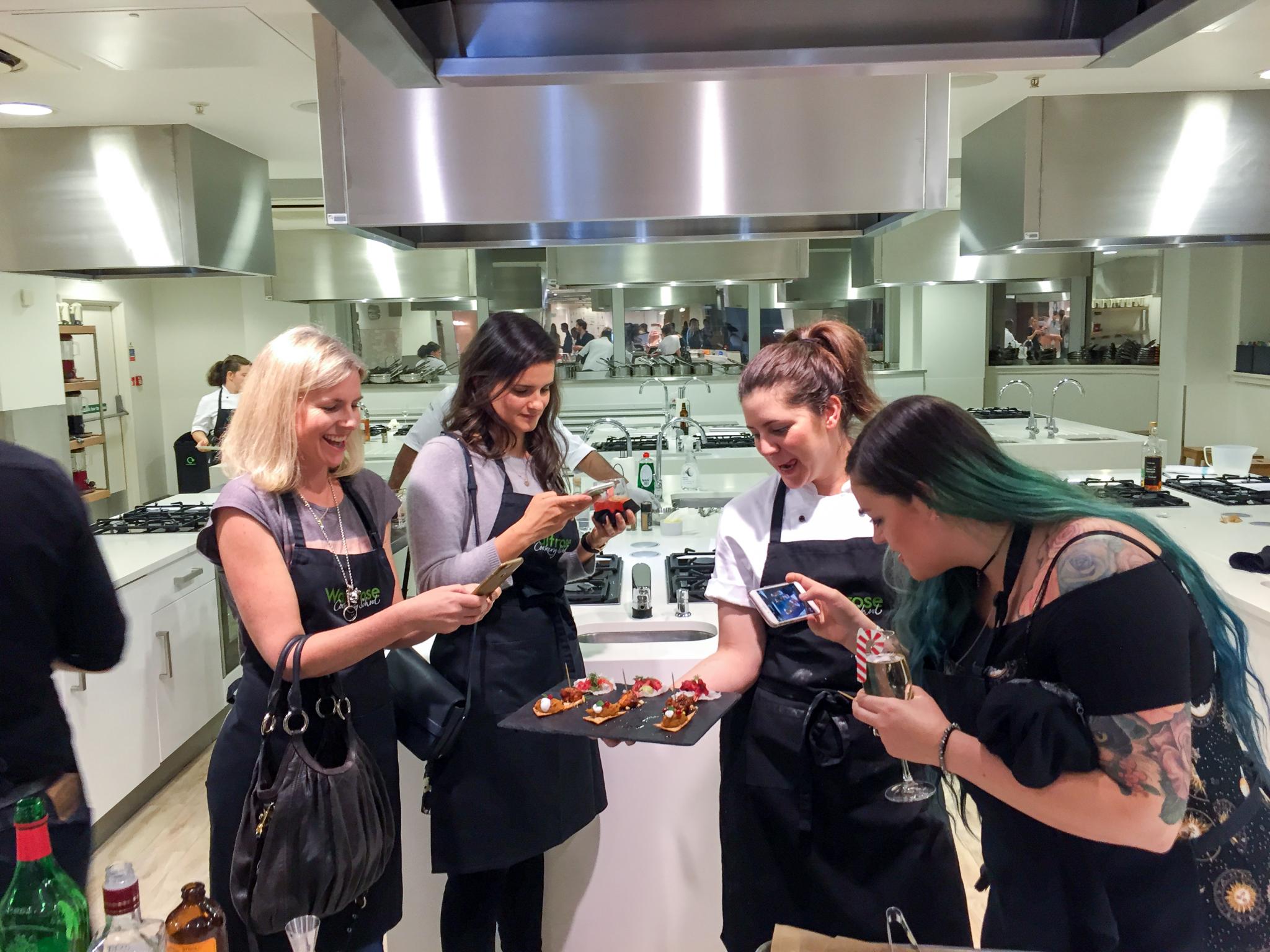