This blog post has been created in collaboration with Quorn. 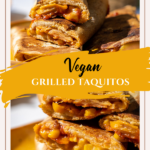 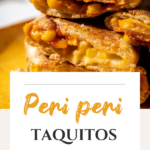 Vegan BBQ with a ZING! These Peri Peri Grilled Chicken Style Taquitos pack a punch and are a great addition to your next BBQ party.

Throughout the years I’ve tried my fair share of vegan BBQ options and one thing I can say for sure: homemade is always the best option! I’ve loved creating these Vegan Peri Peri Grilled Chicken Style Taquitos at home from scratch (yes, even the tortillas!) and they have been divine dipped into delicious dips and also great on their own straight from the grill (when the cheese is still wonderfully melty and gooey!). 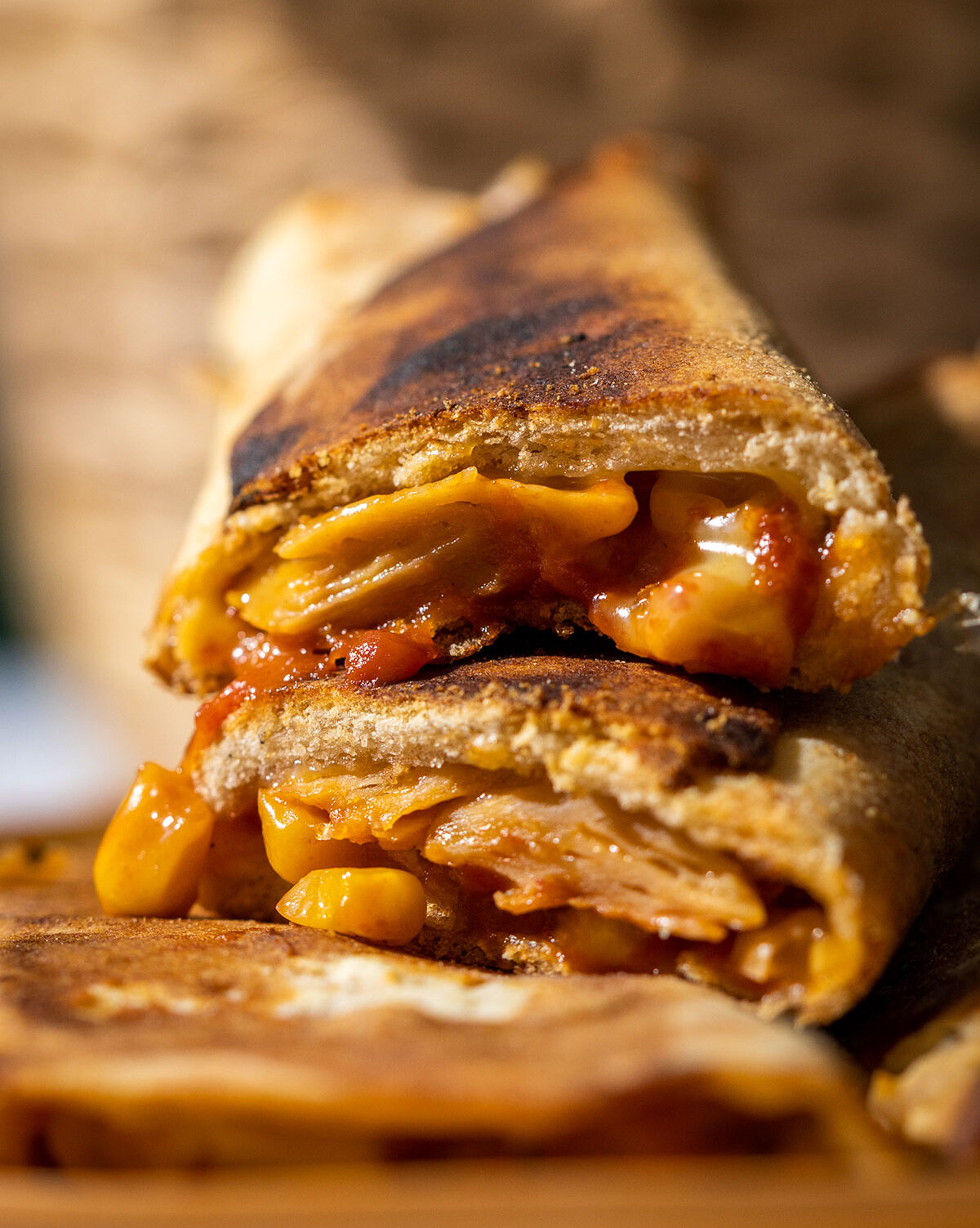 To celebrate the BBQ season, I’ve teamed up with the wonderful team at Quorn for this tasty vegan BBQ recipe – and also to bring you some easy tips and tricks to take your next BBQ party to the next level! In a nutshell, here are a few things to level up your (vegan) BBQ game:

To find out more about giving your vegan barbecue that special something, head over to the Quorn website and read my full article on ‘4 tips to take your vegan BBQ to the next level’.

For this recipe I’ve made my own homemade tortillas from scratch using wheat flour – but if you’re in a rush, or simply want a little more convenience, feel free to replace the homemade option with store-bought tortilla wraps (plain or wholemeal, both are fine!). For a gluten-free option, I recommend using store-bought gluten-free wraps, luckily there’s a whole bunch of options available nowadays!

For the tortilla wraps you’ll need:

To fill the taquitos I’ve used the Peri Peri Strips from Quorn as they’re a great option to add some delicious protein and also a wonderful zing into the taquitos! I personally bought these at Tesco, but they are available from a number of places. Have a look at the Quorn website for some more information on stockists.

For the taquito filling you’ll need:

When placing the taquitos onto the BBQ, I like to brush them with a simple glaze, which not only prevents them from getting dry or sticking to your grill, but also gives them a wonderfully caramelized glaze on the outside. Simply divine!

To ensure the taquitos don’t open up on the BBQ I like to ‘glue’ them shut with a little simple flour glue – don’t worry, this is totally edible 😉 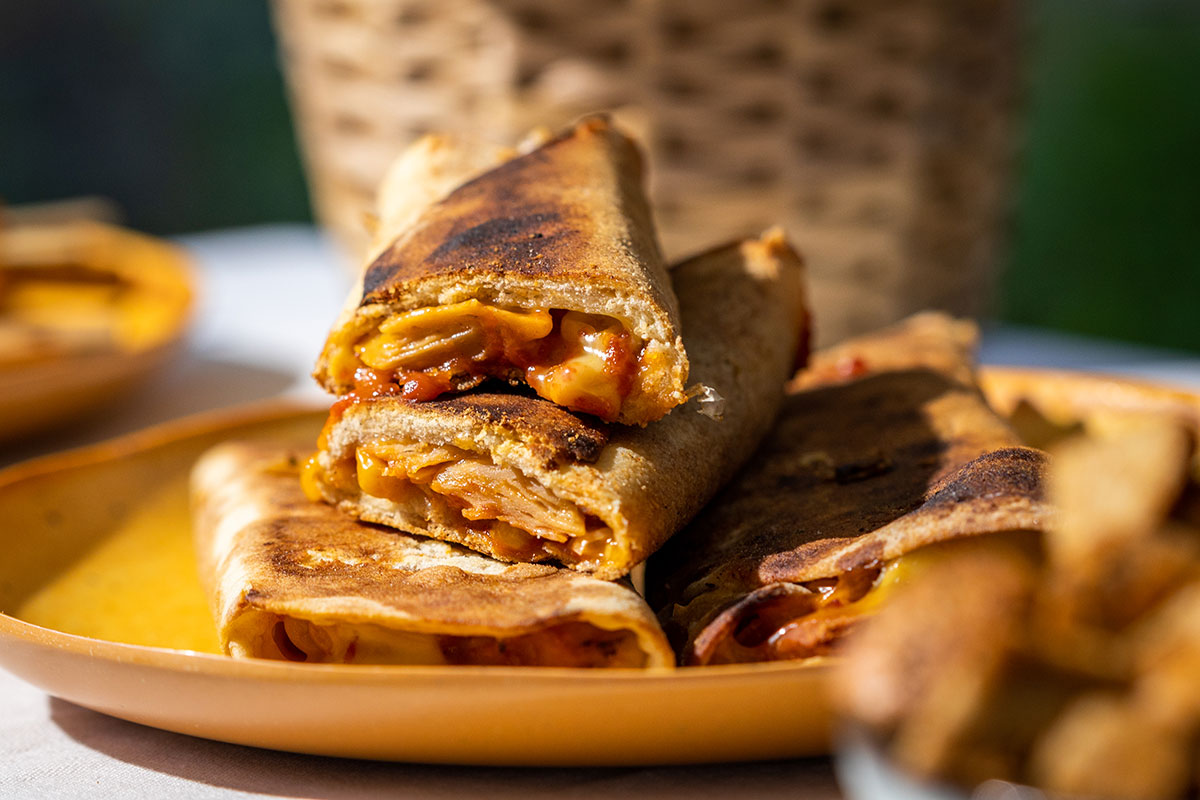 How to make vegan taquitos

These vegan taquitos are easily made in just a few simple steps! For my grilled taquitos, I’ve made my flour tortillas from scratch using all-purpose flour, but for convenience, you can also use store-bought tortilla wraps – just ensure they are soft and don’t rip that easily when you roll them up.

Making the tortilla wraps is the first step for this recipe and I’ve included a super simple and also quick recipe to make flour tortillas from scratch at home. To do so, we’re combining the dry ingredients – flour, baking powder and salt – in a bowl, then stir in the wet ingredients – olive oil and lukewarm water. Please see my detailed notes on the ingredients above as it’s important to use an olive oil intended for cooking and high heat and also the temperature of the water is important to give these quick tortillas a soft and smooth texture. Once combined into a dough, let’s knead the ball on a lightly floured surface for about 2 minutes until you get a dense and smooth dough ball. Set it aside to rest for 15 minutes and use the time to assemble your ingredients for the filling.

Heat a skillet on medium heat, then divide the smooth dough ball into 8 equal pieces. Roll each of them into a ball, then use a rolling pin to roll each ball into a thin round tortilla of roughly 1mm thickness. You will want to roll it as thin as you basically can without ripping it as it will slightly expand during the cooking and you will want it to be flexible enough to roll it into the taquito.

Place each tortilla into the hot skillet and cook on each side for about 30-60 seconds. You will see when it’s time to flip the tortilla, as it will start showing small bubbles and it will slide on the skillet instead of sticking to the bottom. This happens pretty quickly – the thinner, the quicker – so ensure to stay closeby so you don’t burn them. For these taquitos, we don’t want the tortillas to get any golden colour during this stage, as this will make them too crispy to roll them later on. What we’re looking for instead is basically a pale tortilla.

Repeat until all your tortillas are ready.

In the next stage, we’re filling the taquitos! I like to add vegan cheese as it adds a delicious meltiness to the taquito (next level!). Start with the cheese and cut each cheese slice in half, then place the halves in a line into the bottom half of each tortilla. Top the cheese with a line of the Quorn Makes Amazing Peri Peri Strips then add a drizzle of BBQ sauce on top and 1-2 tsp of sweetcorn for each taquito. 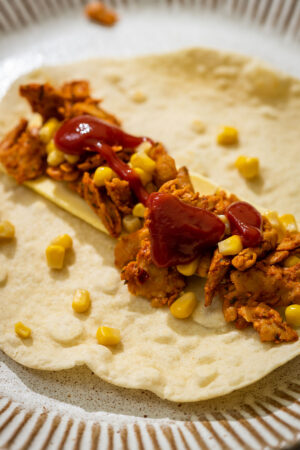 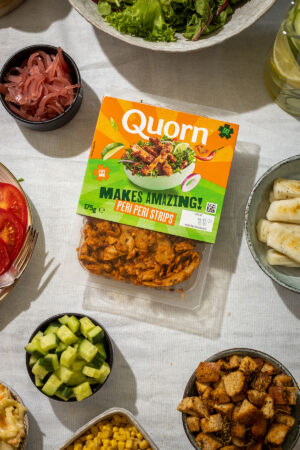 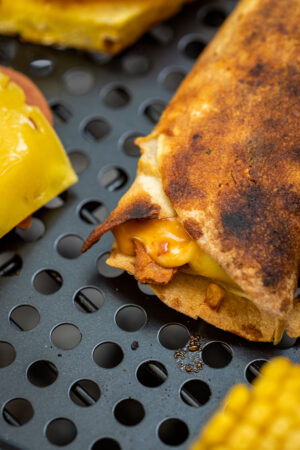 Gently roll up the taquito and repeat with the rest of the tortilla wraps.

To prevent them from opening up during the grilling time, I like to ‘glue’ mine shut with a little flour glue made by mixing flour and water into a thick, sticky paste. Brush roughly 1/2 tsp of the sticky flour glue onto the end of each tortilla to stick it together and prevent your filling from falling out on the BBQ. Let them rest face down on a plate whilst you fire up the barbecue.

Once the grill is ready, whip up the quick glaze for the taquitos in a small bowl and brush all taquitos with the glaze, then transfer them to the grill and cook them for 5-6 minutes on each side, turning them regularly to prevent burning them. Your taquitos are ready once they are golden and lightly caramelized all around.

Best serve the taquitos straight from the grill, when the cheese is still wonderfully melty. Cut each taquito in half and dip it into your favourite dips, such as vegan guacamole – simply divine!

Can I make these taquitos gluten-free?

Make sure to swap out the soya sauce in the glaze for a gluten-free tamari or coconut aminos.

Can I use an electric grill?

Yes absolutely! I love cooking over charcoal for an extra bit of smoky flavour, but you can definitely use an electric grill as well if you prefer. Depending on the heat, the cooking time may slightly vary, so flip them regularly and you’re down once they’re golden all around.

Can I make these Peri Peri Taquitos without a BBQ?

Totally! I love the smokiness from the barbecue, but if you want to make this recipe and don’t have access to a BBQ, you can easily pan fry these in a skillet. For best results add a little olive or vegetable oil to the skillet before placing the taquitos inside and flip them regularly over low/medium heat until golden all around.

For the homemade tortilla wraps:

For the taquito filling:

For the taquito ‘glue’:

Instead of making your own tortilla wraps, you can also use store-bought tortillas.

Looking for more vegan BBQ options? Then look no further, you might really enjoy these ones: