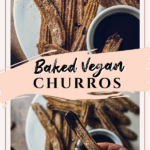 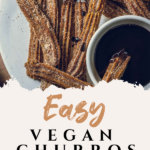 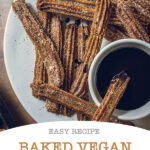 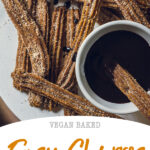 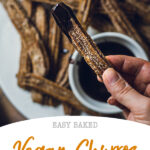 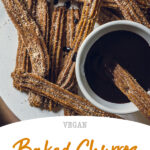 Baked Vegan Churros Recipe – The ultimate vegan snack-attack. This recipe is simple to follow, no fancy equipment or ingredients required. 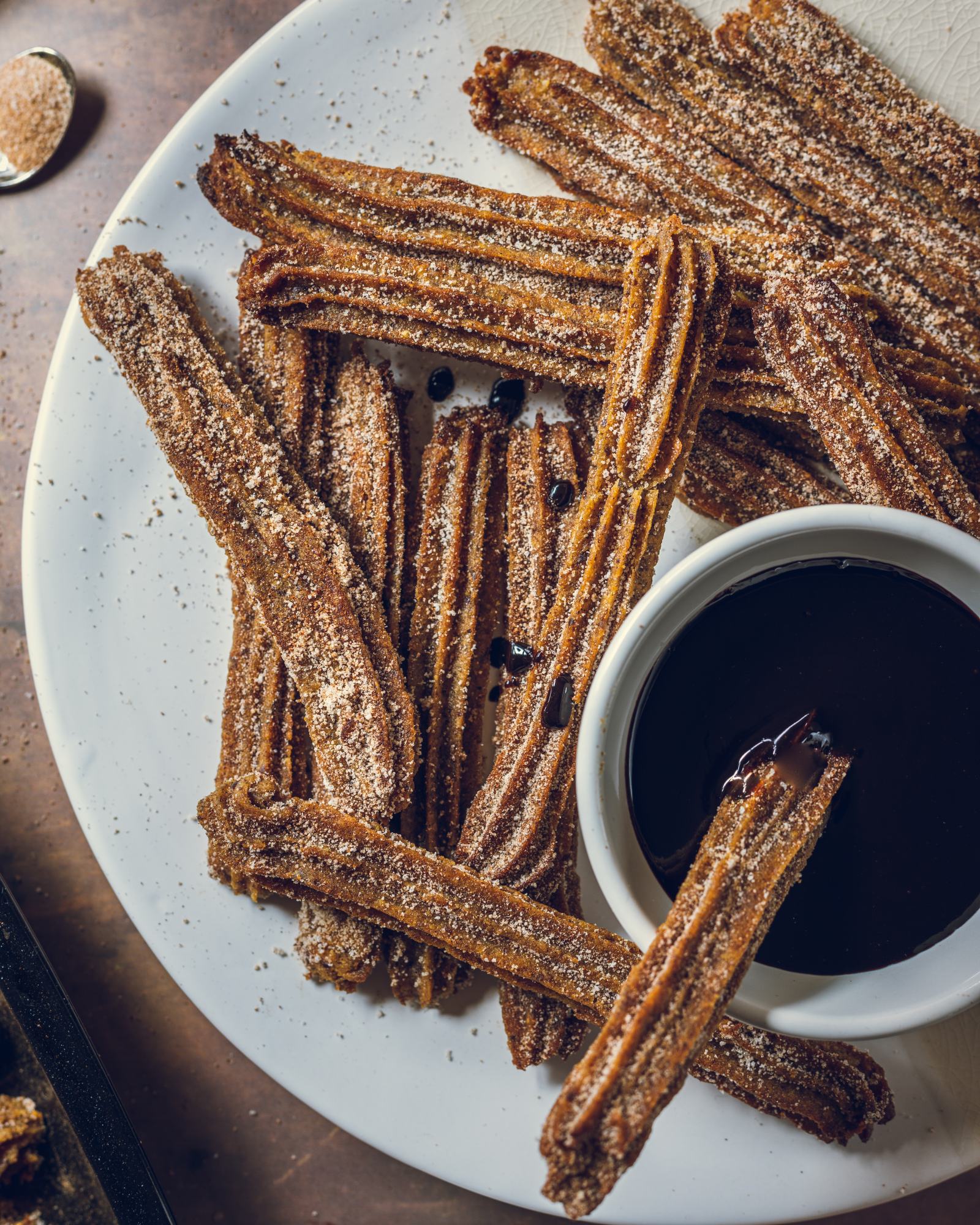 If you’ve ever craved churros after going vegan, then this baked vegan churros recipe is for you! In fact, it may well become one of your favourite vegan dessert recipes…

I’ve honestly loved churros for the longest time. I’m trying to remember when I’ve first come across them, and I am pretty certain that it was in the 90s or early 00s in a German theme park called Phantasialand. Growing up in Germany, churros weren’t widely available, so a trip to the theme park first introduced me to these delicious snacks. 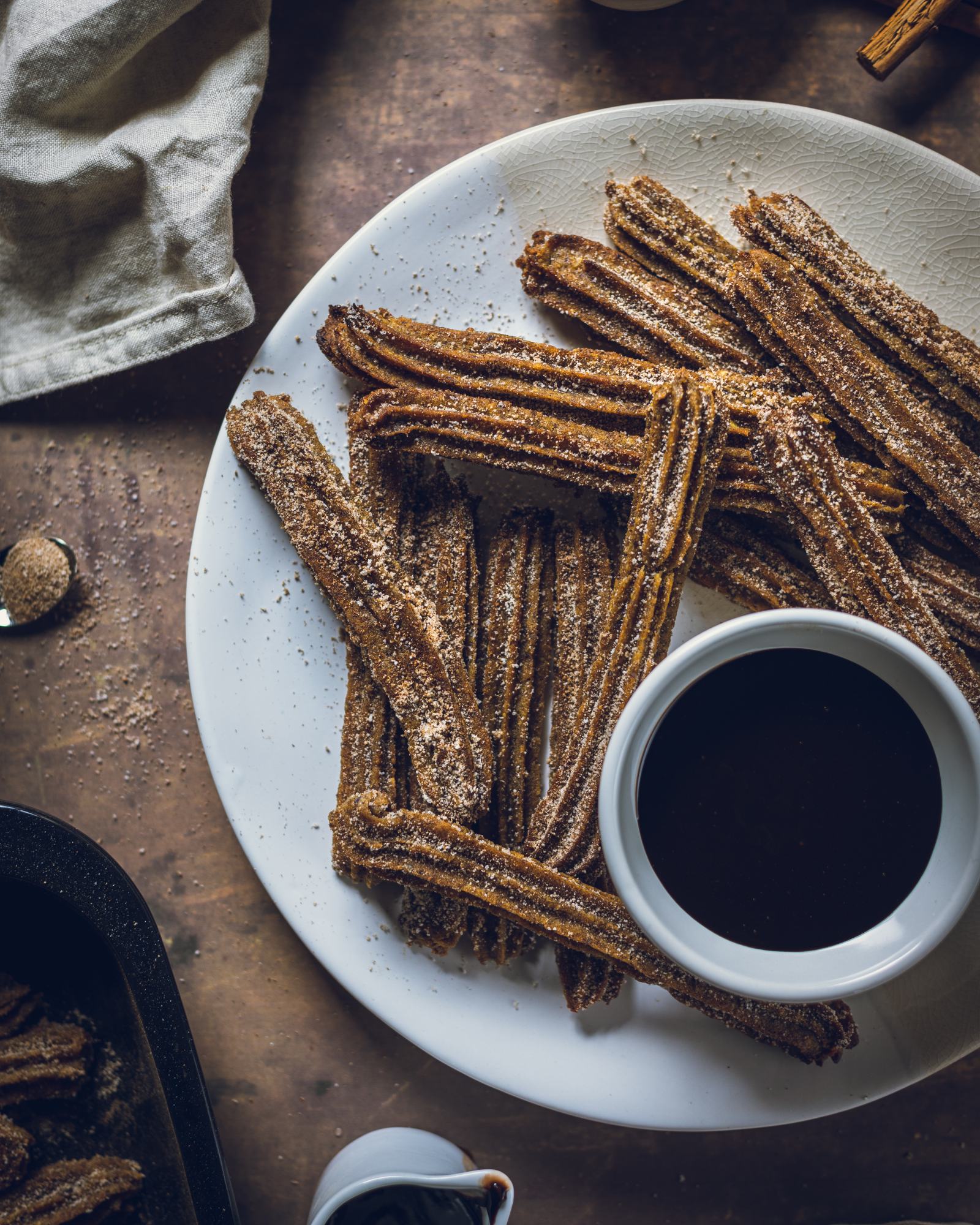 How regular churros are made

Churros are usually covered in a mixture of granulated sugar & cinnamon and often served alongside a chocolate dipping sauce (though there are plenty of other combinations!). Regular churros often contain eggs, however, it is possible to find vegan ones at certain street food stalls (the ones at Thorpe Park are vegan!)

Churros are most often deep-fried, the dough is mixed and then put through a churro ‘machine’  that dropped the churros straight into a deep fryer, creating a crunchy outside and a soft and fluffy inside layer.

Ingredients for the churros:

Ingredients for the coating

For these vegan baked churros, however, you don’t need any fancy equipment. The only things you need are: 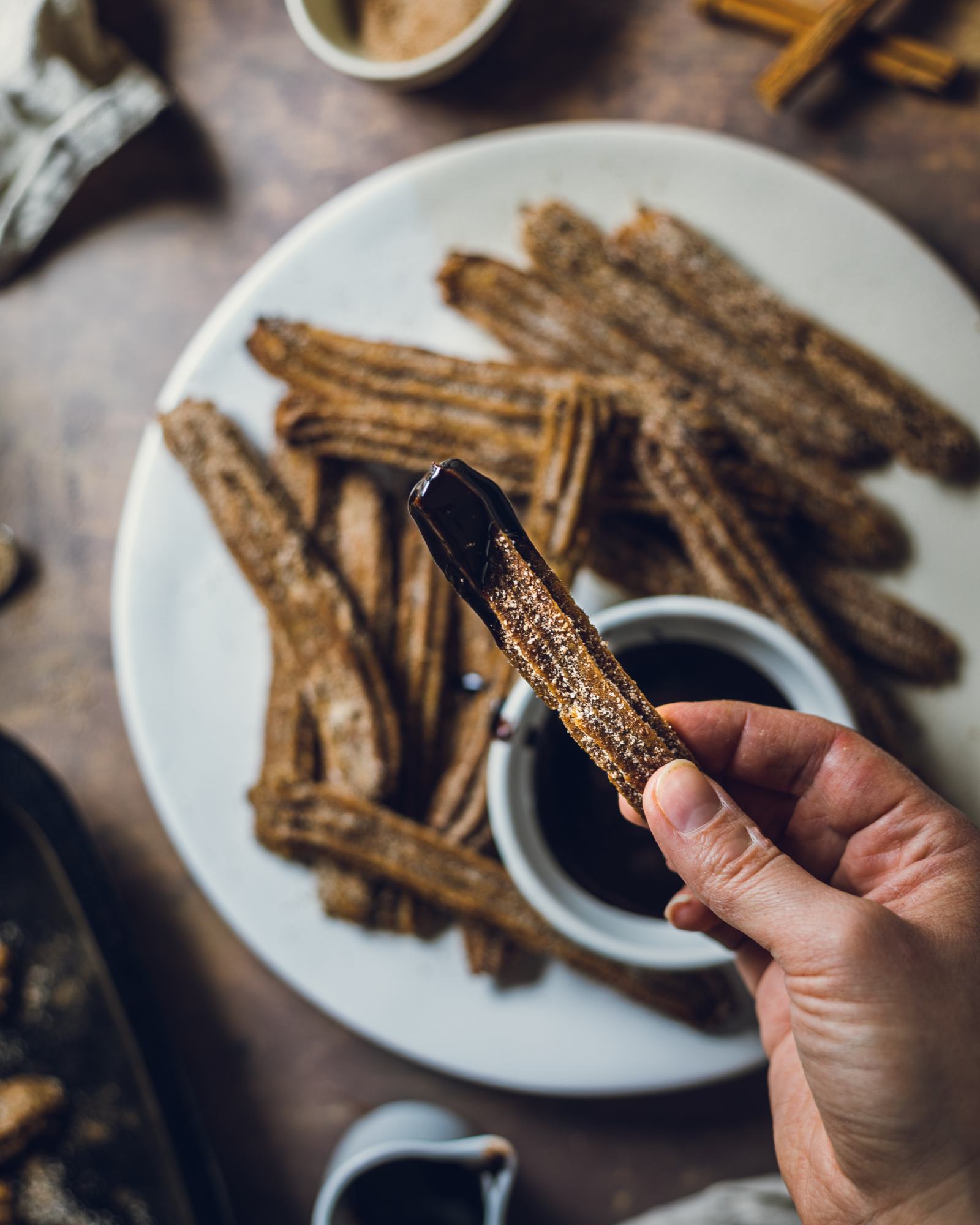 How to make vegan baked churros

To get the dough for these churros right, there is a specific technique to combining your ingredients. In the first part, you combine water, vegan butter (or oil) and sugar in a saucepan and bring them to a boil. Let the butter melt completely and stir to dissolve the sugar.

In a separate bowl, combine the flour and vanilla bean powder.

Prepare 3 flax eggs by combining 3 tablespoons of milled flaxseeds with 3 tablespoons of water, stirring and setting them aside for at least 10 minutes. Within this time the mixture will thicken and become gooey. These flax eggs will help hold the churros together and also add some healthy fats & protein.

Once your wet ingredients have come to a boil, take the saucepan off the heat and instantly stir in the flax eggs, then quickly blend with the flour/vanilla mix. Transfer the batter into a piping bag with a large star-shaped tip and pipe your churros onto a lined non-stick baking tray. Mine are usually around 10cm in length. If you’re making shorter or longer ones, please be aware that the cooking time may vary, so best to keep a close eye on them. As the churros are not expanding in the oven you can pipe them closely onto the baking tray.

Bake your churros in the oven at 190ºC for about 20 minutes or until golden brown. Let them cool down completely after the baking time elapses, before removing them from the tray.

Toss them in a mix of granulated sugar and cinnamon and serve them directly – or alternatively keep them in an airtight container (again, it’s very important that they’re cold before placing them into any container, as they could otherwise get soggy).

Serve alongside vegan chocolate sauce – I made some from 2 Tbsp dairy-free chocolate spread, melted with the addition of 2 Tbsp water. 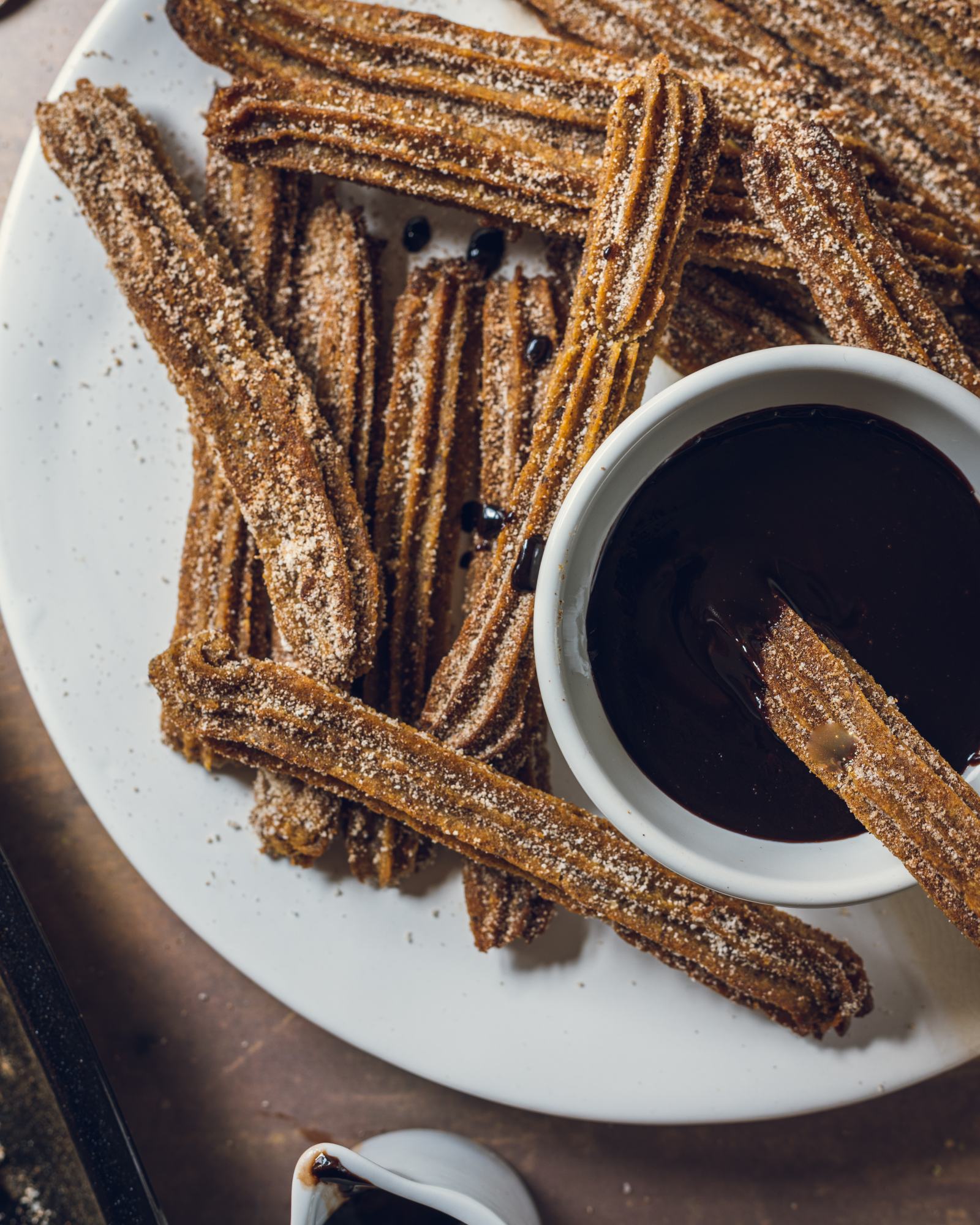 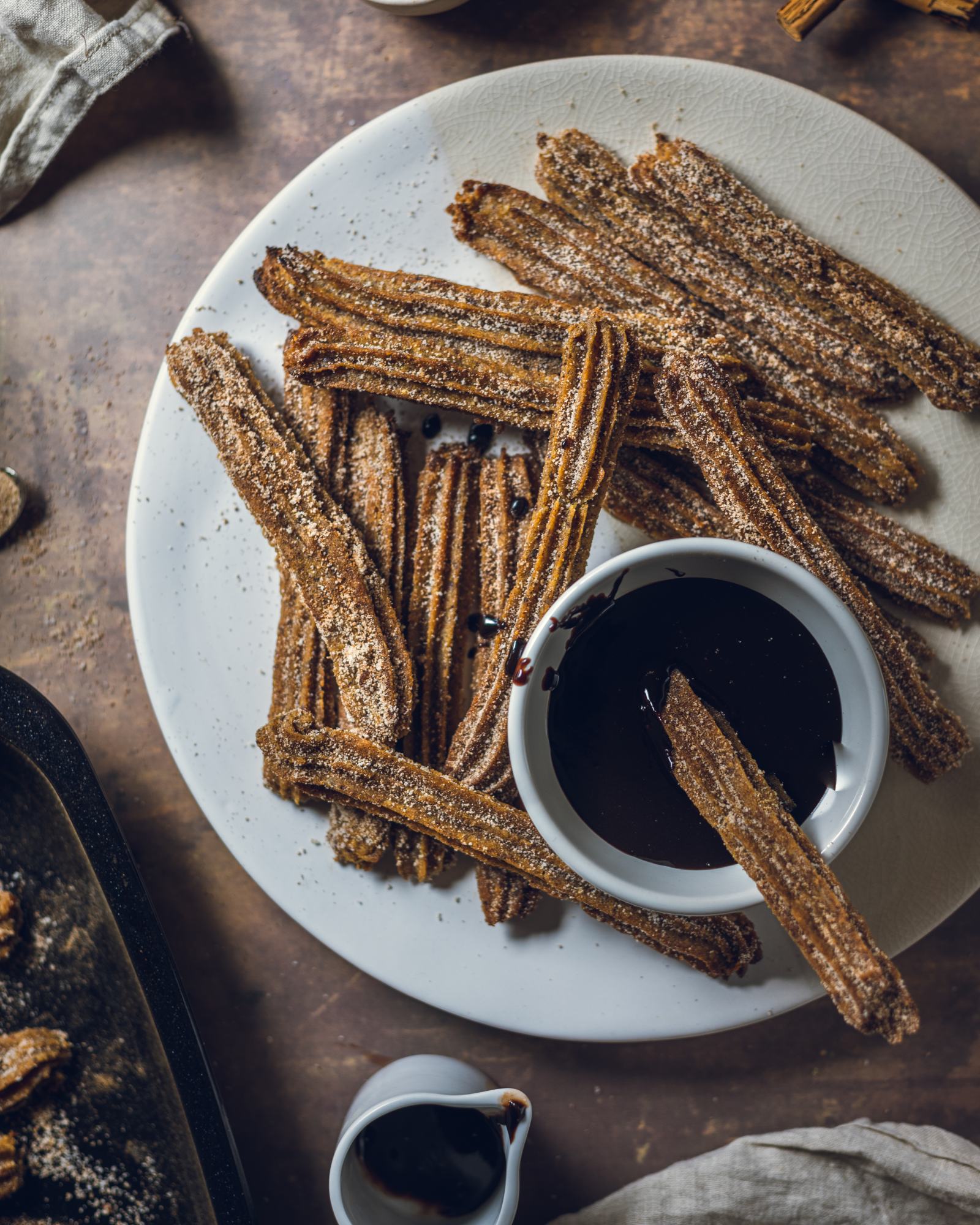 The ultimate vegan snack-attack. This recipe is simple to follow, no fancy equipment or ingredients required.

Looking for more vegan desserts? Check out the cakes and bakes section on my blog or see some of my favourites below: